”Today they would be called programmers” 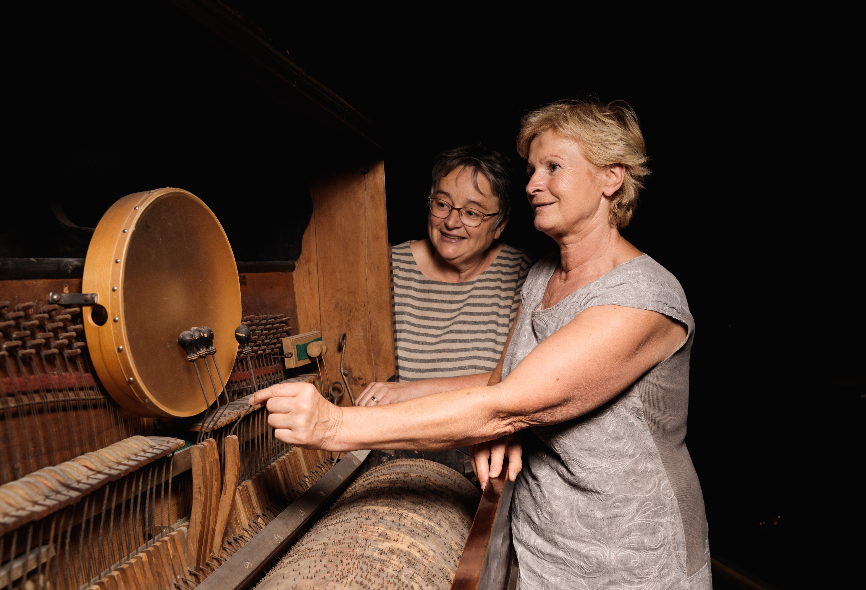 The Mechanische Klangfabrik Haslach is the only Austrian museum for music machines and has loaned two of its exhibits to the Ars Electronica Center. They mark the beginnings of the human search for automated, human-like beings who, for example, take on the tasks of musicians. The exhibition AI x Music takes a look at the cultural and technological history of music machines, bridges the gap to new developments in the fields of machine learning and artificial intelligence, and shows that this is not just about technological phenomena, but about fundamental questions of the relationship between man and machine.

Why do you think people started developing machines that make music? Which more or less replace the musician? What fascinates the inventor?

Gertraud Koblmiller: The music is now accessible to everyone. Even the non-musician can make music with this machine.

Marianne Kneidinger: I believe that the great dance organs, where ten to twelve instruments perform on one organ, were created because the musicians became more and more expensive and people could no longer afford dance bands. That’s why dance organs were built. Everyone could have their own private orchestra. Originally, however, they were set up at the fair for entertainment, later also in salons or large hotels.

They said that anyone can make music. But you need a basic understanding of music to develop the pieces.

Gertraud Koblmiller: Today they would be called programmers. The piece was arranged on a sheet of music, the pinning was done in the factory. There were several factories, even in Germany. The pinsetters set already existing notes, they set the pins exactly.

Is there anything a music machine can do better than a human being?

Gertraud Koblmiller: It can be used anytime. People are not always efficient. The machine plays the same program all the time. If I don’t change it, it will always play the same program.

What is the fascination with music machines for you personally?

Gertraud Koblmiller: The mechanics! Definitely the mechanics and also the beautiful furniture that has been used, the great handicraft, …

Marianne Kneidinger: …the different types of data carriers, the design. For many years they have worked on one device with incredible endurance behind it.

If you see the objects in the exhibition next to technologies like AIs, are there any parallels? What is dividing, what is in common?

Gertraud Koblmiller: Certainly there are parallels, they came to my mind immediately with this piano, the Bösendorfer grand piano. We know the Welte piano, the Welte mignon reproduction piano, the first mechanical music machine that made the largely authentic reproduction of piano pieces possible. The musician, the composer, was playing on the piano and simultaneously a roll of paper ran along. Where the hammer pounded, the pattern was placed and later the hole. It was the musician who was able to hear the recorded artist’s role on piano pieces.

Marianne Kneidinger: With these machines as well as with programming – there is always a person behind it. A machine cannot work alone, it has to be programmed. Whether in a piece of music, in weaving machines, in programming, …

What are the limits of machines?

Gertraud Koblmiller: One is limited when it comes to the music. There’s hardly anyone who makes such pin rollers anymore. You could only play what you programmed. The “data sets” were much more limited than those of computers. A maximum of six pieces of music were on one roller – and that was already a lot! In the past, people deliberately listened to music, there was no constant noise level in the background.

Marianne Kneidinger: Actually, the human being is the machine. He has to wind it up, human power is needed everywhere. The creative also lies in the exterior, in the craftsmanship. Humans stand behind everything. Even with computers they are the most important thing. Without inputs you can do nothing. I doubt that robots will be able to produce a creative output on their own.

Both the barrel piano and the flute come from the collection of the Mechanische Klangfabrik in Haslach. In 1994 Erwin Rechberger opened this first Austrian museum for music machines, whose unique collection he and his son have collected over the decades from all over Europe. With its more than 160 exhibits, the Mechanische Klangfabrik Haslach has since invited visitors to explore the history of music machines, from the Baroque to the interwar period.