Future in a Nutshell: Smart Textiles 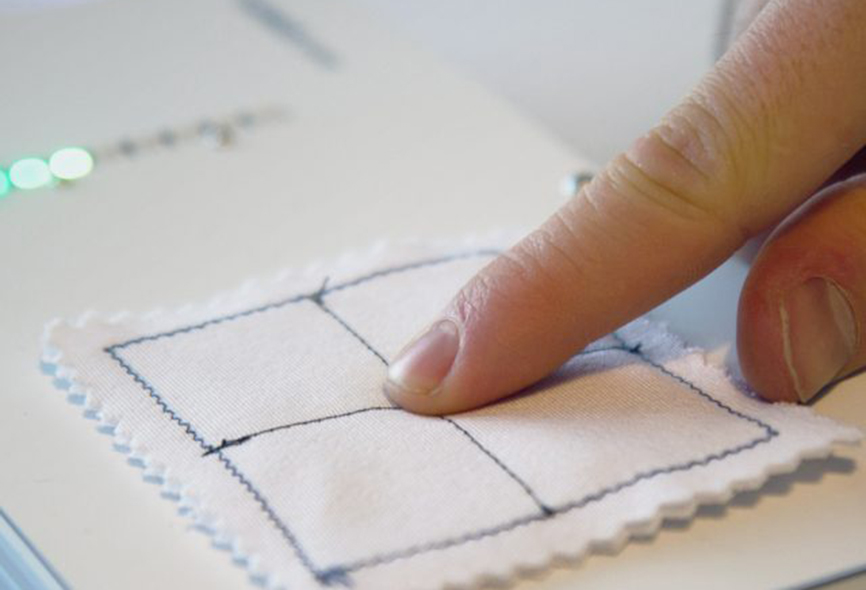 As part of the lecture series “Future in a Nutshell” Michael Haller, Professor at the Interactive Media Department of the University of Applied Sciences Upper Austria and founder and head of the Media Interaction Lab, speaks about Imperceptible Textile Interfaces at the Open Innovation Center of the JKU. The talks, which have already been organized by Ars Electronica several times, will be offered exclusively to employees of Greiner Technology & Innovation. Over a period of several months, various experts, local knowledge carriers from Upper Austria, will give lectures on the most important developments and technological trends of the next ten years. In past events, computer scientist Sepp Hochreiter gave a lecture on “Artificial Intelligence”, Alois Ferscha, professor at the Johannes Kepler University Linz, spoke about the “Internet of Things”, Claudia Novak, communication expert and curator of TEDxLinz, gave inputs on mistakes and Johannes Braumann spoke on the subject of creative robotics. Michael Haller is now continuing this series and has told us in advance what possibilities textiles offer and how they can be used.

You have founded the Media Interaction Lab at the University of Applied Sciences Hagenberg in 2004. Can you briefly explain the founding ideas, the people involved and the research direction?

Michael Haller: The Media Interaction Lab (MIL) is one of the leading Austrian research laboratories in the field of Human Computer Interaction. The laboratory is part of the Department of Digital Media of the FH Oberösterreich, Campus Hagenberg, and combines technical know-how with creative expertise based on a fundamental understanding of users and their needs. The focus is on the research and development of tomorrow’s computer interfaces. The lab was founded in 2004 and is one of the first labs of the FH OÖ. In the COMET project “TextileUX”, smart pressure-sensitive textiles (fabrics, knits, etc.) are currently being researched together with the Johannes Kepler University and the Kunstuniversität Linz as well as other research partners, which are currently used primarily in the automotive industry.

As you have just mentioned, you are currently mainly researching “Imperceptible Textile Interfaces”. Could you please briefly explain what this research is about?

Michael Haller: The primary goal of TextileUX – Imperceptible Textile Interfaces is to develop pressure-sensitive textile sensors that can transform clothing or everyday objects into smart interfaces. Since they can be discretely integrated into their surroundings, textiles offer an optimal solution for developing the interfaces of tomorrow.

How will these (“Imperceptible Textile Interfaces”) technologies influence and change the work environment in the future, what are the potentials but also the difficulties?

Michael Haller: Textiles have a lot more to do with computer science than one would generally believe. At first you think of the Ski Cap or the socks you don’t want for Christmas. In the TextileUX project, funded by the FFG (Forschungsförderungsgesellschaft FFG), the Media Interaction Lab aims to re-integrate knowledge from textile art into computer science over the next four years. What makes this project so attractive is the fact that hardware can be made ever smaller: Never before has it been this easy to attach it to textiles. The aim is to develop a pressure-sensitive yarn that can then be woven and knitted. It is a wafer-thin coated thread with a thickness of 80 to 120 µm, roughly the thickness of a hair. Due to their fineness, such yarns can easily be sewn into textiles and used for knitting and weaving. The knitted product and the fabrics can not only measure the pressure, but in combination with other yarns can also be made to glow, measure moisture or be heated. In TextileUX, the Media Interaction Lab currently concentrates on the automotive sector and cooperates with BMW, Volkswagen and KTM, among others, to this end.

The work of the plastics manufacturer Greiner and yours – do you see parallels and to what extent could companies benefit from their work?

Michael Haller: In the future, there will also be smart plastic surfaces that perform several functions. Analogous to the textile world, new interfaces will certainly emerge here with the same goal: to reduce weight in order to increase the user experience at the same time.

Finally, can you go into more detail about an interface you are currently working on?

Michael Haller: One example is the use in a vehicle, e.g. iNEXT by BMW: The jacquard fabric comes to life when touched and allows music to be controlled. In no time, inconspicuous surfaces become the control elements of tomorrow.

Michael Haller is a professor at the department of Interactive Media of the University of Applied Sciences Upper Austria (Hagenberg, Austria), where he is founder and director of the Media Interaction Lab (www.mi-lab.org), responsible for computer graphics & human-computer interaction. His core areas of expertise are smart graphics and the development of next-generation user interfaces. He received Dipl.-Ing. (1997), Dr. techn. (2001), and Habilitation (2007) degrees from Johannes Kepler University of Linz, Austria. His current focus is on innovative interaction techniques and smart interfaces for next generation working environments. Currently, he leads a team of over 10 researchers and students. He has been awarded the Erwin Schrödinger Fellowship Award, Google Research Award, Europrix Top Talent Award, Best ACM SIGGRAPH Emerging Technologies Award, and Microsoft Imagine Cup. Six of his papers were awarded best paper or honorable mention at top HCI venues including ACM CHI and ACM UIST.