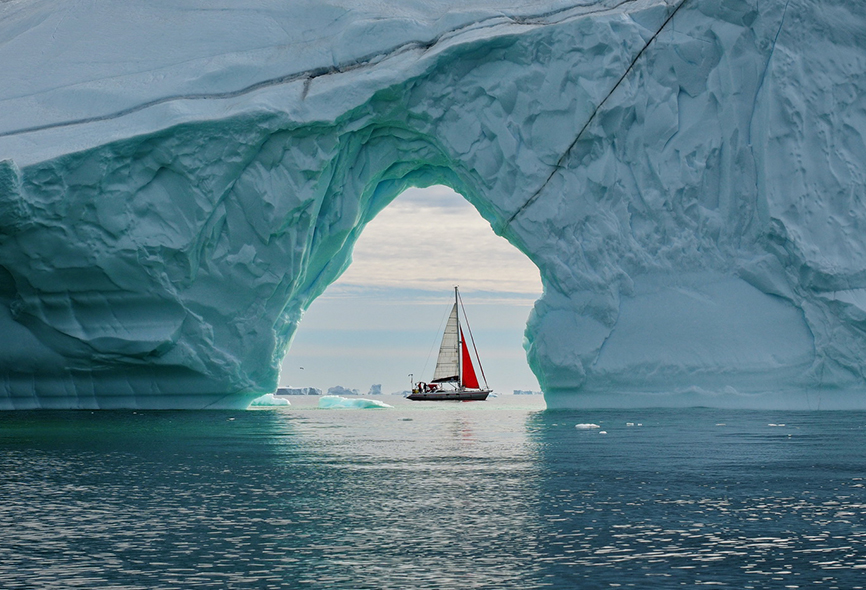 Powerful, thrilling and mystical are the first three associations Hans Thurner comes up with about Greenland. The mountain and ski guide, photographer, lecturer and book author has been travelling around the world for many years now, since 2016 he has already spent a total of five months in Greenland. On November 29 he will be giving a Deep Space Special lecture at the Ars Electronica Center and, with the help of the unique environment of this location, will not only bring the landscape of Greenland to Linz, but also the people, this extraordinary, changing society. We asked him in advance to correct and complete our images of Greenland and to tell us what the audience can expect next Friday.

What awaits the visitors at the Deep Space Special lecture?

Hans Thurner: An overall view of Greenland that most people will not expect! The visitors are “right in the middle” of the stories and experiences on the huge screen, accompanied by original sound recordings of Greenlandic musicians. The photos and films will be commented live.

You say in the announcement of your lecture that Greenland is much more than “ice and snow”. What or how is Greenland?

Hans Thurner: Many have only a vague idea of the largest island in the world, such as that there is hardly any life other than ice and snow. But the populated coastal regions in the west, south and east of the country are characterised by several smaller and larger villages. In Tasiilaq, for example, the largest settlement on the east coast, live about 2,500 people. There are two supermarkets, a hospital, a school and a kindergarten. Just behind the last houses of the settlement you can walk into the so-called “flower valley”. In summer dozens of different types of flowers bloom here. In the south of the country there is even agriculture, although on a modest scale, as well as livestock farming with sheep. The capital Nuuk on the west coast is home to 18,000 people. The parliament is also located here and for ten years there has even been a university.

How does society in Greenland differ from ours? And what can we learn from each other?

Hans Thurner: Greenlanders used to be hunters only. They had to adapt perfectly to the Arctic weather and ice conditions in order to survive. What has remained to this day is an admirable calmness in dealing with weather-related time delays, for example. They don’t seem stressed at all. The Greenlanders can also be described as very peace-loving people, since they have never waged war. They meet strangers with an unprejudiced openness. The family cohesion that made survival possible in earlier times was and still is strongly pronounced. Today, however, a profound change is taking place in the society of survival artists. Hunting culture has lost its significance and the modern world has penetrated the furthest corners of villages at a rapid pace. Unfortunately, this brings not only many advantages but also many social problems such as high unemployment and alcohol addiction. At the same time, a new spirit of optimism is noticeable, especially among young people, who value old traditions with a certain self-evidence and connect them effortlessly with modern ways of life.

Ars Electronica is all about “art – technology – society”. We just talked about the last point, what role does technology play in a country like Greenland that seems to be governed by nature?

Hans Thurner: As in every developed country on earth, technology is playing an increasingly important role in Greenland, of course – in communication, transport, supply, administration, etc… Greenlanders may, however, be more relaxed when, for example, “nothing moves” in air and sea traffic, because nature, in the form of strong winds, fog and pack ice, leaves “everything standing still”. Sometimes even for days – in summer as well as in winter…

What has impressed you the most, what is most memorable to you and how has your attitude towards Greenland changed?

Hans Thurner: You will rarely find so much expanse, size and clarity in a landscape like Greenland. This impresses practically everyone who travels to Greenland and leaves a lasting impression! However, increasing global warming and the associated changes are making Greenland more and more differentiated. The retreating glaciers will probably open up the mining of huge quantities of raw materials in the not so distant future. The decline in Arctic sea ice makes Greenland more accessible to shipping, creating new opportunities for international trade. On the other hand, Greenlandic hunters will find it much more difficult to carry out their traditional hunting practices, e.g. by dog sledding, which in turn will lead to the loss of an important part of Greenlandic culture and identity. The big question is how Greenlanders will cope with these changes and challenges and whether they will be able to develop into a self-determined state or whether they will become the plaything of the great powers. 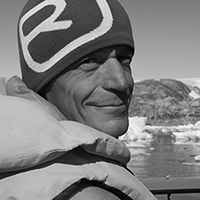 Hans Thurner was able to realize his life’s dream and make the fascination that mountains, travel and photography exerted on him his profession. The camera has always accompanied him and helps him to capture the fleeting moments of his encounters with nature and man. He is one of the best-known speakers in the professional lecture scene. He takes his audience with him on his “visionary journeys” full of geographical and cultural diversity. His multivision lectures have received several awards. Today he works as a mountain and ski guide, photographer, lecturer and author. He has long made a name for himself as a connoisseur of the Austrian and international mountain world, a renowned trainer and an experienced tour guide.

Every Thursday, 7 PM, the Ars Electronica Center invites you to a Deep Space LIVE “. High-resolution image worlds in the format of 16 by 9 meters meet expert commentary, entertaining double conférences and musical improvisation.