It is our seventh continent, accounts for 10% of the land mass, contains 70% of the Earth’s fresh water reserves and 90% of its ice mass. It is also the largest repository of scientific data about our climate history. And it is melting incessantly, at the alarming speed of 200 swimming pools per minute. If it were to disappear altogether, it would lead to a 60-meter rise in sea level, the greatest refugee crisis mankind has ever experienced.

We’re talking about Antarctica, which, by the way, comes from ancient Greek and means “facing the Arctic”. The Italian architect, researcher and activist Giulia Foscari and the collective UNLESS have dedicated the Antarctic Resolution to it. The 1000-page manifesto, to which 150 leading Antarctic experts contributed, is both a declaration of love and a wake-up call to the world. And it is not least a call to action: “Speak up for Antarctica now!” is the message, because although the future of the planet depends to a large extent on the fate of Antarctica, it has no advocates and its importance is largely underestimated.

“Antarctic Resolution was conceived by Giulia Foscari / UNLESS to catalyse global attention to one of our few Global Commons and create a constituency for our only continent without an indigenous population, with the ambition of contributing to the protection of the Antarctic, and in turn, of our own species.”

The project has now been awarded the STARTS Prize 2022 in the Grand Prize – Innovative Collaboration category for precisely this endeavor. It is awarded for “innovative collaboration between industry or technology and the arts that open new pathways for innovation.” The international jury, which included Francesca Bria (IT), Andres Colmenares (CO/ES), Asako Tomura (JP), Lucía García (ES) and Alexander Mankowsky (DE), wrote in their statement:

„It opens up new perspectives and insights by leveraging the means and powers of art as a research practice as well as a way to enable awareness and concern, participation and involvement.“

To learn more about this incredibly fascinating yet terrifying project, Giuli Foscari told us how this knowledge of Antarctica came to be, what measures are being taken to make this extensive body of work accessible to the general public, and what core message she would like us all to take away.

What was driving you, what was the motivation behind the project Antarctic Resolution?

Giulia Foscari: Antarctic Resolution sparked from the shocking realisation that we are collectively neglecting an entire continent which has unparalleled scientific potential and dangerously luring resource basins, and which threatens to literally submerge coastal settlements worldwide launching the largest migration ever witnessed by humankind. Once I realised that my ignorance on the continent was inversely proportional to the importance of the Antarctic for our own species, I was not only motivated but absolutely determined to try to somehow contribute to redeem Antarctica from oblivion by catalysing and disseminating knowledge on our seventh continent. This ambition is ultimately what led to the foundation of UNLESS and to the multidisciplinary collective effort embodied by Antarctic Resolution.

Giulia Foscari: Indeed Antarctic Resolution was conceived with the twofold ambition to create a high-resolution image of the our seventh continent, and to mobilise planetary citizens to advocate-for and demand Antarctic resolutions on the governance of what is unquestionably a Global Commons that should be managed equitably in the interest of society as a whole. Whilst the first was possible thanks to the unwavering commitment of 150 leading world Antarctic experts who collaborated closely with UNLESS to produce the first encyclopaedic publication on the Antarctic, it is not as straightforward to define what are the best strategies to activate the general public to engage with a far-away land seemingly unrelated to them.

Our first attempt towards this goal is the campaign we recently launched in Berlin on occasion of the Antarctic Treaty Consultative Meeting – the yearly conference in which member states to the Treaty (of which only 29 have voting power) meet, along with selected Observers and Experts, to take all decisions pertaining the future of the territory below of the 60th parallel South. Entitled “Speak Up For Antarctica Now” the campaign took over the streets of the German capital calling upon Berliners and passers-by to create a constituency for our only continent without indigenous population and to speak-up in support of three mayor resolutions to promote: an immediate permanent ban of hydrocarbon extraction in Antarctica; the commitment to build international stations in the continent, as opposed to the current proliferation of mostly un-efficient national outposts; and the establishment of three Marine Protected Areas in the Southern Ocean, the largest carbon-sink of Planet Earth.

I am not certain on what is a “successful” strategy to ensure that these arguments resonate within the geopolitical high-diplomacy arena and ultimately lead to actual change in policies and governance, but I would assume that one will need to operate both at a global scale – launching a movement powerful enough to put pressure on the decision making bodies – and within the geopolitical realm – to construct, with the necessary patience and determination, strategic alliances within member states of the Antarctic Treaty in defence of intergenerational justice.

What’s the meaning of winning a prize like STARTS prize to you and the project, how does it help Antarctic Resolution?

Giulia Foscari: We are deeply honoured to have been awarded the STRATS prize. We are great believers in the power of artistic production to catalyse global action, disseminate scientific knowledge and accelerate the process of data democratisation, which are at the heart of the STARTS initiative.

In fact, it is exactly this belief that led us, so far, to present Antarctic Resolution also in form of exhibitions in Venice (within the Central Pavilion of the 17th Architecture Biennale), in Madrid (at the Museo Nacional Thyssen Bornemisza), and in Milan (on occasion of Pre-Cop 26). The exhibitions were conceived as calls to action – an action we deem undeferrable considering the ever-increasing planetary disasters induced by climate change (which could be mitigated by the implementation of essential environmental policies developed on the basis of ground-breaking Antarctic research) and recent escalations in political unrest, that have the daunting potential to redirect national interests on Antarctic resource exploitation.

With this in mind, we are immensely excited of the possibility of sharing the research with the audience of Ars Electronica and all other partners of STARTS, hoping that the multidisciplinary conversations that will surely unfold in these occasions can push the agenda of UNLESS further and enlarge the Antarctic constituency. We are particularly grateful for this nomination as we see the potential for the European Union to step up as a major player in the Antarctic arena – setting aside the national agendas promoted to date within the polar governance model and embracing a true spirit of collaboration in line with the statues of the Antarctic Treaty – to promote sustainable policies and resolutions for Antarctica which could increase humanity’s chance of reaching the climate targets set forth by the Paris Agreement. Aware that the accelerated thinning of Antarctic ice sheets will, without question, endanger the very existence of a vast areas of coastal Europe, we are particularly grateful to STARTS for the opportunity to dive into a deep exploration on the potential role of the European Union in and for Antarctica.

If you had to express the importance about the Antarctic in one sentence….:

Giulia Foscari: What happens in Antarctica – our largest planetary archive accounting for 10% of the landmass, 70% of the freshwater and 90% of the ice of Planet Earth – does not stay in Antarctica. 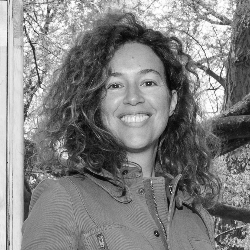 Giulia Foscari W. R. (IT) is an architect, researcher and activist who has been practising in Europe, Asia and the Americas. She is the founder UNLESS, a non-profit agency for change, and of its alter ego UNA, an architecture studio focussed on cultural projects. Giulia taught at Hong Kong University and at the Architectural Association. The work of UNA and UNLESS was exhibited extensively internationally. Giulia authored Elements of Venice and edited Antarctic Resolution (Lars Müller Publishers). She is a member of the International Council of the MoMA, a Board Member of the Fondazione Musei Civici di Venezia and of the Antarctic Southern Ocean Coalition.

UNLESS is an agency for change. It is a non-profit organisation devoted to transnational research on extreme environments threatened by the planetary crisis. Founded by architect Giulia Foscari in 2019, the agency collaborates closely with a vast network of multidisciplinary specialists based in all seven continents. UNLESS operates alongside its alter ego, the architecture studio UNA.

You can experience this project as well as the other winning projects of the STARTS Prize 2022 from September 7 to 11, 2022 at the Ars Electronica Festival 2022 in Linz.