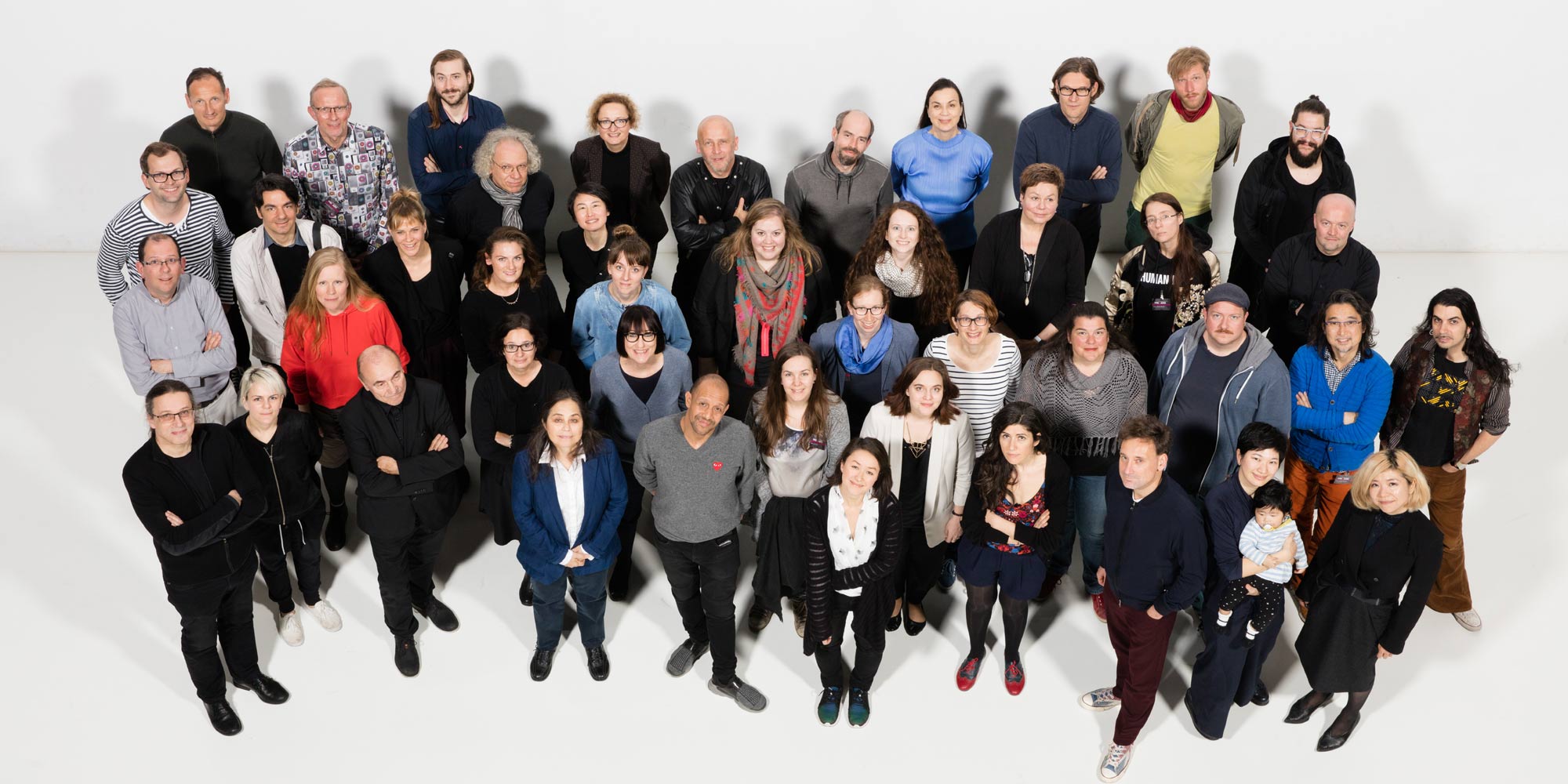 Réka Bucsi, born in 1988, is a hungarian independent animation filmmaker. She received her BFA and MFA at the animation department of Moholy¬-Nagy University of Art and Design Budapest. Her graduation film Symphony no. 42, got Shortlisted for the 87th Academy Awards. Her films were screened at official shorts competition Berlinale, SXSW, Sundance, Annecy,and won over 50 international awards. 2013/2014 she attended Animation Sans Frontiéres (ASF), the European Animation Production Workshop. She was one of the artists in residence at the Open Workshop in Viborg, and at Q21 in Vienna. Her new short film LOVE is a french-¬hungarian co-production. Réka is represented as a director by Passion Pictures.

Shuzo John Shiota graduated from Sophia University, majoring in International Legal Studies. After joining Nippon Steel Corporation in 1991, Shuzo then jumped industries to participate in the launch of Dream Pictures Studio in 1997. He moved to Polygon Pictures two years later and in 2003 assumed the position of President and CEO. The company has since enjoyed exponential growth as the premier digital animation studio in Asia, winning many accolades including multiple Emmy Awards. In 2008, he was selected as one of the “25 Toon Titans of Asia” by popular industry publication Animation Magazine. Shuzo has also juried on many major Japanese and international film festivals, including Prix Ars Electronica, SIGGRAPH, Annecy, and Digicon6. He has given talks worldwide, including TEDxKyoto in 2015. In his spare time, Shuzo engages in his life long passion as a vocalist in a classic rock band.

Anezka Sebek teaches at the Parsons School of Design Master and Bachelor Design and Technology programs. Before teaching, she was a producer/director in the film and television industry where she oversaw visual effects and computer animation for technologically complex projects. She also wrote, produced, and directed music videos, narrative shorts, and documentaries. Ms. Sebek served on computer animation festival and animation juries. She completed her Ph.D. in Sociology dissertation entitled Family Homelessness in the Small City.

Memo Akten is an artist working with computation as a medium, exploring the collisions between nature, science, technology, culture, ethics, ritual, tradition and religion. Combining critical and conceptual approaches with investigations into form, movement and sound, he creates data dramatizations of natural and anthropogenic processes. Alongside his practice, he is currently working towards a PhD at Goldsmiths University of London in artificial intelligence and expressive human-machine interaction. His work has been shown and performed internationally, featured in books and academic papers; and in 2013 Akten received the Prix Ars Electronica Golden Nica for his collaboration with Quayola, ‘Forms’.

Prof. Sabine Hirtes teaches since 2010 at the University of Offenburg Postproduction and Vfx . After graduating in “Visual Communication” at the FH Aachen miscellaneous creative and educational activities in the field of digital print media as well as moving images with a focus on computer animation and Vfx in different companies, studios and schools in Germany and abroad such as the Filmakademie Baden-Wuerttemberg, Cairo Film Institute and the ZKM, Centre for Art and Media, Karlsruhe.

Victoria Vesna is an Artist and Professor at the UCLA Department of Design Media Arts and is Director of the UCLA Art|Sci center. With her installations she investigates how communication technologies affect collective behavior and perceptions of identity shift in relation to scientific innovation (PhD, University of Wales, 2000). Her work involves long-term collaborations with composers, nano-scientists, neuroscientists, evolutionary biologists and she brings this experience to students. Victoria has exhibited her work in 20+ solo exhibitions, 70+ group shows, has been published in 20+ papers and gave 100+ invited talks in the last decade.

Jens Hauser is a Paris and Copenhagen based art curator and media studies scholar focusing on the interactions between art and technology. He holds a dual research position at both the Department of Arts and Cultural Studies and at the Medical Museion at the University of Copenhagen, and is a distinguished affiliated faculty member of the Department of Art, Art History and Design at Michigan State University. His curated exhibitions include L’Art Biotech (Nantes, 2003), Still, Living (Perth, 2007), sk-interfaces (Liverpool, 2008/Luxembourg, 2009), the Article Biennale (Stavanger, 2008), Fingerprints… (Berlin, 2011/Munich/2012) Synth-ethic (Vienna, 2011) and Wetware (Los Angeles, 2016).

Shiho Fukuhara graduated from BA (Hons) Fine Art at Central Saint Martins College of Art and Design (1st Class) and MA(RCA) in Design Interactions at Royal College of Art in London. After her studies she participated to Le Pavilion, the artistic research laboratory of Palais de Tokyo in Paris in 2004. Also she was the artist in residence at IAMAS (Institute for the Advancement of Media Art and Science) in Gifu, Japan. Her motivation is to give focal points to existing social issues with science, technology and communication through creating alternative conceptual models, strategies and approaches. To advance her research-based approach, Shiho have formed the BCL, an artistic research framework and open collaboration platform dedicated to exploring and critically investigating the interfaces and predetermined breaking points between Art, Science, Design, Technology and Society.

Ghalia Elsrakbi, Designer, researcher and educator. She completed a BA Graphic Design at Artez Hogeschool voor de Kunst, Arnhem, followed by a Masters in Design at the Sandberg Institute, Amsterdam. In 2009, she followed a research post-graduate at Jan van Eyck Academy in Maastricht and co-founded Foundland Collective; art and design practice based in Amsterdam. Her work aims to draw together disciplines of art, new media, graphic design, and writing. She has been involved in research, exhibition and projects with special focus on the Middle East. Since 2014 she teaches at the Arts department at the American University in Cairo and the exhibition director of Cairotronica; Symposium of Electronic and New Media arts in Cairo, Egypt. Ghalia is a Smithsonian fellow and Prix de Rome finalist (2016).

Born in Postojna in 1961, lives and works in Ljubljana, Slovenia. At the initiative of the Student Organisation of the University of Ljubljana he conceived the Kapelica Gallery – Gallery for Contemporary Investigative Arts, which he has been running since. As curator and selector he has contributed to domestic and international festivals. In 2014 he co-curate the Designing Life section for Biennial of product design in Ljubljana and curate the Slovenian pavilion at Venice biennial for architecture. He started the year 2015 as an appointed curator of the Freies Museum Berlin. Jurij Krpan lectures about the artistic profile of the Kapelica Gallery in Slovenia as well as abroad.

Antye Greie-Ripatti is a digital songwriter, sound artist & curator, composer, poet, feminist, activist and public speaker. She is also known as AGF, Laub and poemproducer. Born 1969, raised in East Germany, she lives and works in Hailuoto, Finland since 2008. She works with language, sound, listening, voice and communication, which is expressed in mixed media, audiovisual live performances, digital communication, sound installations, commissions for radio, movies and theatre, exhibitions and conceptual works. Greie-Ripatti has released 30 long player records and numerous collaborations under such aliases as AGF, AGF/Delay (with Vladislav Delay), Greie Gut Fraktion (with Gudrun Gut), and The Lappetites (with Kaffe Matthews and Eliane Radigue), many collaborations with the award-winning classical composer Craig Armstrong. She runs the production company and music label AGF PRODUCKTION and has produced records for other artists most famously for Ellen Allien (SOOL, 2009, BPitch). In 2011 Greie-Ripatti founded the arts organization Hai Art in Hailuoto and practices as artistic director, executive producer and workshop leader. Hai Art has organized a conference on remote art, 10+ Artist-In-Residencies, extensive sound program with children in Hailuoto, the iPad Orchestra Hailuoto, the Organum, the Hailuoto (mini) MediaLAB and numerous artist camps. Since 2011 she works as independent sound curator.

Rikke Frisk is the founder and co-director of the community focused culture production company: Indgreb, which is based in Copenhagen. Indgreb specializes in projects within participant-driven art and innovation events. Within their portfolio is the creation of the international innovation and art competition festival, Afsnit I. Rikke’s latest initiative is Talk Town – a debate festival on gender, equality and feminism of which she is co-initiator and festival director, a position she is familiar with from her time as manager and co-creator of Strøm – the leading festival for electronic music in Scandinavia, which she ran for several years. Later on Rikke was head of the secretariat for the Copenhagen hosting of WOMEX – the world’s biggest world music fair and festival. Among several obligations she is a member of the board of Denmark’s leading venues for contemporary, experimental Jazz and world music: Copenhagen Jazzhouse and Global. With a background in architecture and communication she is an experienced creative leader, with renowned relational abilities to unfold peoples skills and ideas.

Myriam Bleau is a composer, digital artist and performer based in Montreal. She creates audiovisual systems that go beyond the screen, such as sound installations and performance-specific musical interfaces. Her hybrid electronic practice investigates music performance as a codified manifestation and seeks avenues of subtle disruption through the recontextualisation of pop culture elements and historical tropes. Her work has been presented and recognized internationally: Ars Electronica (AT), Sónar (ES), Sonic Arts Award (IT), Elektra (CA), ISEA (CA), Transmediale (DE), ACT (KR).

Emre Erkal is a practicing architect and sound artist. After becoming an electronics engineer, he worked on research projects in artificial intelligence, cognitive science and interactive technologies. He received his professional degree in architecture from Harvard, while participating in research projects at MIT Media Lab. His prize-winning projects for Architectural and Urban Design competitions, as well as completed buildings in various countries received several awards. In addition to professional designs in interactive media in Turkey and the USA, his spatial sound installations have been featured in venues including the Istanbul Biennial, ZKM, Mediamatic and Netherlands Institute of Architecture. He has presented and participated in organizations including ISEA, SIGGRAPH and Ars Electronica. He co-founded NOMAD in 2002, an organization in Istanbul for producing international events in digital arts and culture.

Sirikit Amann has been a juror since the very inception of the u19 – CREATE YOUR WORLD category for youngsters under 19 years of age in Austria. She is currently director of cultural education at KulturKontakt Austria, a non-profit organization that promotes education and culture in Austria as well as Eastern & Southeastern Europe. She had previously served as an expert advisor in artistic affair at the Austrian Federal Ministry of Education, Art and Culture and in the Office of the Federal Chancellery Minister.

Elisabeth Rosemann has spent more than 10 years developing software; her field of concentration is processing of unstructured data. She studied software engineering at the Upper Austria University of Applied Sciences’ Hagenberg Campus as well as statistics. She’s also a volunteer mentor at Linz’s CoderDojo , an association designed to support youngsters’ efforts to get started in the world of programming.

Daniel Seitz is a media educator. Offering media training to members of society is a matter of great importance to him; accordingly, he established the mediale pfade

By starting the content, you agree that data will be transmitted to .
Data Protection Declaration

agency and is actively involved in NGOs including GMK–Society for Media Pedagogy and Communications Culture and Fonds Soziokultur. He’s also a contributing author at netzpolitik.org and medienpaedagogik-praxis.de.

Manuela Grundner is a colorful personality who stands way out from the crowd. She studied art history in Graz via the second-chance educational path. Then, with degree in hand, she rerouted once again and founded murbit, an interdisciplinary enterprise that focuses on software programming and organizational development. Manuela Grundner is the CEO. She maintains her connection to art via Film ab…! [Run the film], a creative project for apprentices that incorporates methods from film analysis and coaching as a means of enabling participants to work on their own personality. A second area of emphasis is on using artistic approaches to make company values visible. This project, a co-production with multimedia artist Gudrun Jöller, was nominated for the State Prize in Consulting and honored with a First Place by the Constantinus Award in 2016.