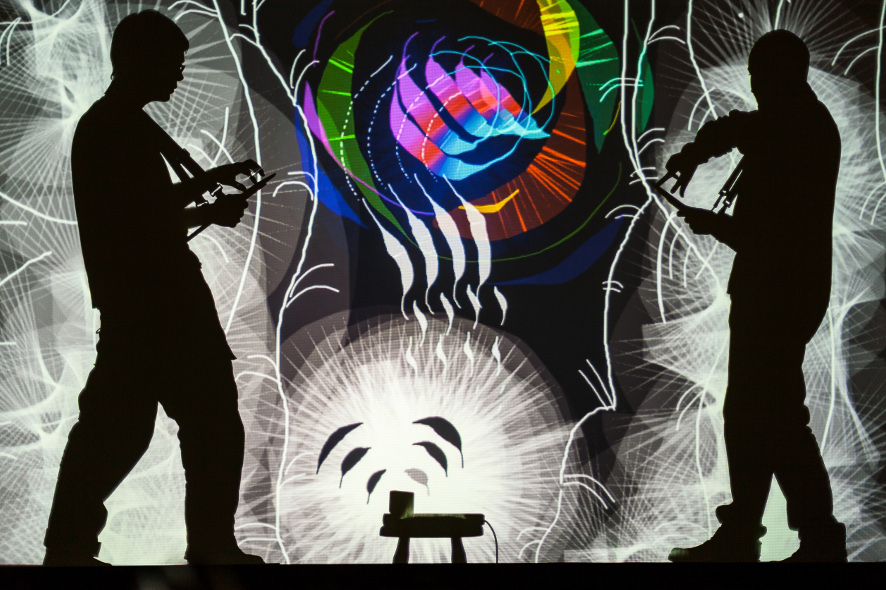 Linz was admitted to UNESCO’s Creative Cities Network in December 2014. Since then, the city is entitled to call itself a UNESCO City of Media Arts. A substantial contribution to this title having been bestowed upon Linz was made by Ars Electronica, which, for 37 years now, has been observing and calling attention to new developments that have emerged on the basis of art and technology and that have been inspired by them. The construction of the Ars Electronica Center in the mid-‘90s established a Museum of the Future totally dedicated to new media, their various manifestations and multifarious impact on society. Media art expresses the essence of these developments, and this was the focus of attention at the Deep Space Weekend just held at the Ars Electronica Center.

At a workshop held that Saturday, staff members of the Vienna-based firm OMAi presented Tagtool, an app that turns Deep Space 8K into an extraordinary setting for interaction. This app enables workshop participants to breathe life into animated figures they draw themselves and to project their creations onto the jumbo 16×9-meter displays in Deep Space 8K. The man who led this workshop, Markus Dorninger, told us what it’s all about. 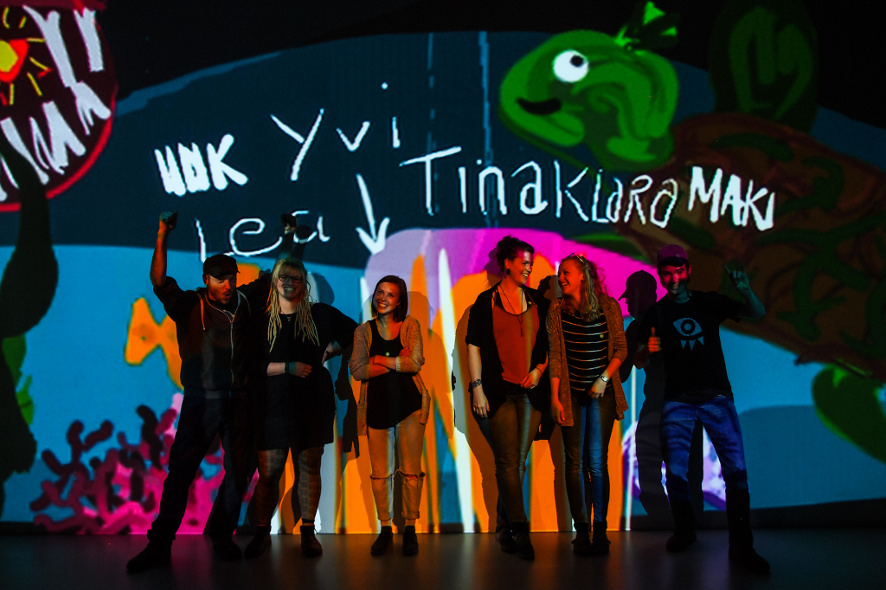 What exactly is the Tagtool app and what can you do with it?

Markus Dorninger: Tagtool is the fastest way to extract images from your mind and bring them to life in front of an audience. What’s called for is manual dexterity. You can paint with all 10 fingers, and then simply take hold of the images you’ve rendered and put them into motion. With simple components, users can create increasingly complex animated worlds featuring figures, backgrounds and even abstract content.

Tagtool is generally used together with a projector—for instance, to produce spontaneous visuals on a stage, digital graffiti on the street, or even at parties. Tagtool is available as an app for iPad.

How did you come up with the idea of developing this app?

Markus Dorninger: The idea emerged during my work on “Theresas Traum” [Theresa’s Dream], a play for young people by Tetete.at. We wanted to tell a story that was unique at each performance, but we couldn’t find an appropriate tool to produce completely spontaneous animated sequences before a live audience.

So, we got started seeking a do-it-yourself solution. The result was Tagtool, a self-made drawing machine equipped with knobs and controllers. We published the schematic diagram and the idea quickly proliferated worldwide. Soon, creatives in Australia, Brazil and the USA were sending us photos of their own DIY Tagtools.

Then, we decided to implement the Tagtool idea for multi-touch tablets in order to take full advantage of the human fingers’ expressive capabilities. The result was the Tagtool for iPad app that, among other honors, was singled out for recognition with the Content Award and was presented by Apple at the worldwide developer conference in San Francisco.

At present, we’re working on the next chapter of the Tagtool story. It’s going to be an exciting year! 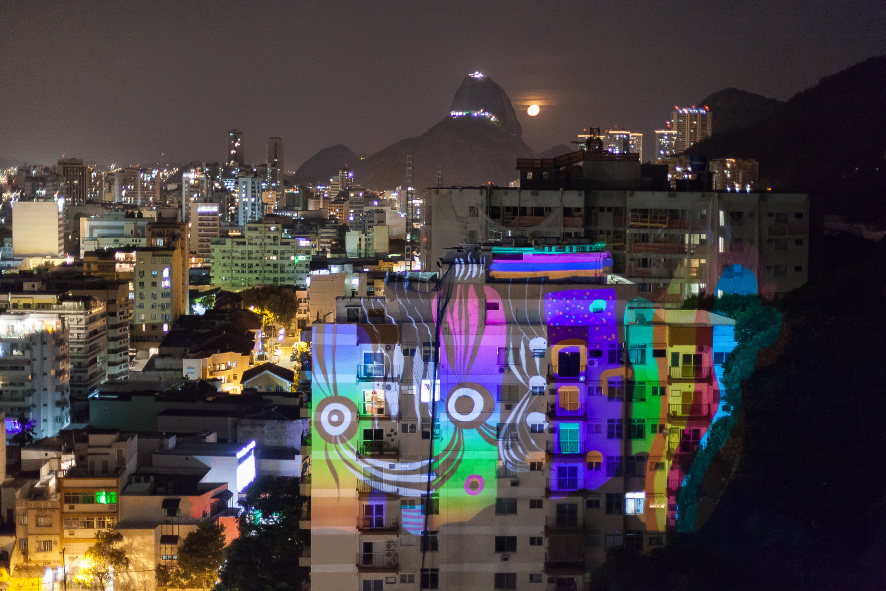 You’ve already used this app to produce great projection mappings. What’s the most spectacular place you’ve been to so far?

Markus Dorninger: I can’t single out one particular location. This project has already taken us to more than 40 countries. Tagtool has been presented to The Queen in London’s Royal Festival Hall; we’ve projected images created by Indio kids onto enormous tree trunks in the Brazilian rainforest; and we painted on a firewall at Checkpoint Charlie in Berlin. We had a magnificent session on the façade of a temple in Ubud on Bali. And just last week, we staged a performance with dancers and musicians in the old city of Taipei that turned an entire city square into an ecstatic party zone. The point isn’t to paint the most famous or the most imposing locations; much more important is the atmosphere and the people around us with whom we’re sharing a very special moment. 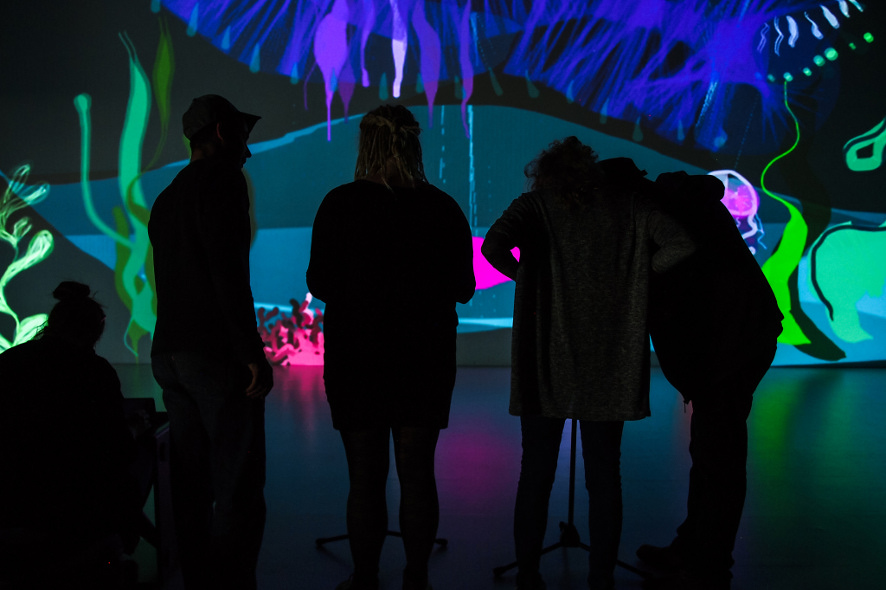 Markus Dorninger: Definitely! Tagtooling in Deep Space really does give you the feeling of being totally immersed in a world of moving colors and forms. It’s truly a privilege to have such an extraordinary opportunity available right here in Austria. We’re already considering ways to enhance Tagtool so that it can take full advantage of the possibilities of three-dimensional depiction and high resolution that Deep Space provides. It’s just a matter of time!

You’ve already conducted numerous workshops with your app. Who can take part in these sessions? Are there prerequisites as far as knowledge and skills are concerned?

Markus Dorninger: We’ve held Tagtool workshops for people with no prior skills whatsoever, as well as for experienced artists. The contents of a workshop are tailored to the participants’ level of experience. We’re often booked to conduct workshops for special target groups—for example, socially disadvantaged youngsters or people with Asperger Syndrome. And companies stage workshops to stimulate their staff’s creativity. You don’t have to be a brilliant artist to use Tagtool; this is much more a matter of spontaneous communication. 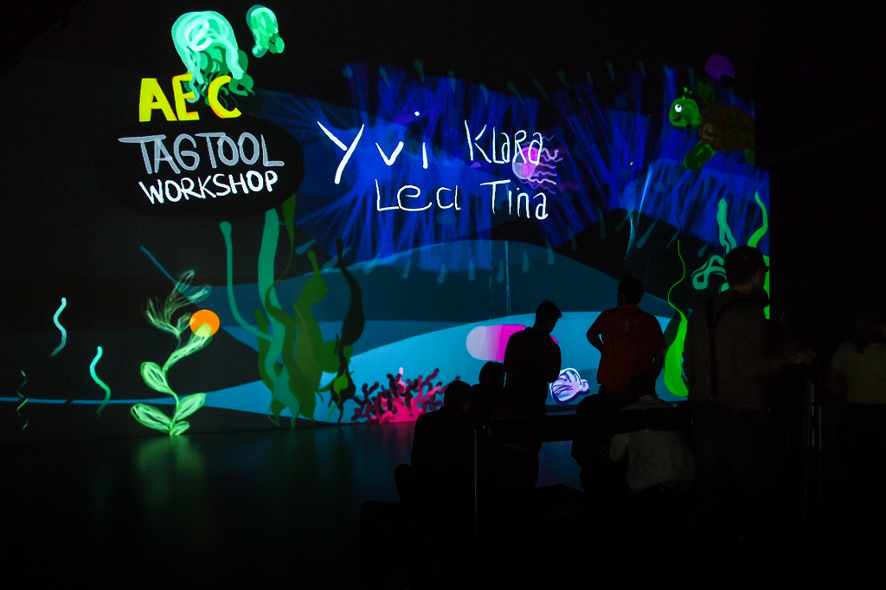 During the Deep Space Weekend: UNESCO City of Media Arts, visitors to the Ars Electronica Center could also take part in a Tagtool workshop …

Markus Dorninger: Exactly! We showed participants how to use Tagtool to create spontaneous visual worlds. In going about this, the accent was on working together as a team, since all the participants created their paintings and animated sequences on the same virtual screen. The outcome was a wonderful collective work of art. In going about this, it’s essential to take into account the actions of other participants and to work on achieving a shared objective. Not only did we aim to get across how to use the app; we also wanted to foster a spontaneous, joint approach to digital creativity. And I think we succeeded in doing just that!

The next opportunity to take part in a Tagtool workshop in Deep Space is for kids and will be in conjunction with the Ars Electronica Center’s summer vacation program. We’ll be posting details soon to https://ars.electronica.art/center/programm/ferienprogramm/