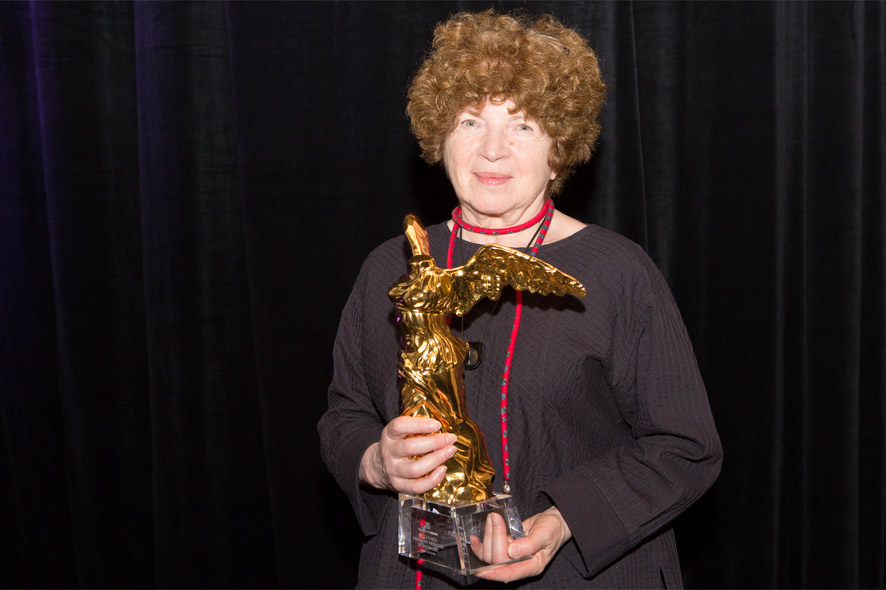 Jasia Reichardt is 2016 Visionary Pioneer of Media Arts and was awarded a Golden Nica at the Prix Ars Electronica. Credit: Florian Voggeneder

Since 1987—for 30 years now—Prix Ars Electronica’s juries made up of an annually changing lineup of experts from all over the world have convened to select the best works of media art submitted for prize consideration by men and women worldwide. In 2017, the four categories are Computer Animation/Film/VFX, Digital Musics & Sound Art, Hybrid Art and u19 – CREATE YOUR WORLD. A Golden Nica statuette and prizemoney of up to €10,000 are bestowed in each category.

The 3,000+ submissions received in 2016 set a record—one that was a far cry from the slightly more than 700 entries in 1987. Since then, to be sure, quite a lot has changed in the art world, in technology and in society as a whole. Media art in the 1980s was a predominantly male domain, a fact amply attested to by the submissions in that period. Things have changed in this respect too over the last 30 years; nevertheless, women are unfortunately still a minority in media art.

More than half of all submissions in 2016 came from men; less than a quarter were received from women; the rest were entered by organizations and groups composed of women and/or men. We recently met with Ars Electronica Artistic Director Gerfried Stocker as well as Emiko Ogawa and Christl Baur of the Prix Ars Electronica staff to take a retrospective look at developments in this competition.

Looking back on the Prix Ars Electronica’s 30-year history, one is struck by the fact that men far outnumber women among the Golden Nica winners …

Gerfried Stocker: Yes, that’s true, there’s no disputing it. And it’s extraordinarily important to address this issue. But by no means has this been due to insufficient attention on the part of Ars Electronica. This gender distribution ultimately reflects a prevailing—and very unsatisfactory—state of affairs: the fact that there are considerably fewer women active in the fields of art and technology.

You’ve issued a statement elaborating on several measures Ars Electronica has already taken in past years to counter this development. How’s the situation with the Prix Ars Electronica?

Gerfried Stocker: The decision as to who wins a Golden Nica is made by the jury in the particular category. Where Ars Electronica can indeed exert an influence is on the composition of the juries, since they’re constituted anew each year. Christine Schöpf and I took over organizational responsibility for the Prix Ars Electronica in 2004 and, since then, we’ve made a concerted effort to achieve gender equality among the jurors. Last year, in fact, more than half the jurors were women.

Christl Baur: The infographics we’ve compiled here are based on Prix Ars Electronica data from the past 30 years, including all submitted projects and all juries. We’ve divided the data into female and male participants as well as organizations and groups of artists whose members include one or more women as well as men.

This graphic very clearly shows the development with respect to the Prix juries over the years—from a single female juror in 1987 to gender equality in 2016. Now, keep in mind that the number of Prix Ars Electronica categories has repeatedly changed over the last 30 years and, accordingly, the number of possible Golden Nicas too. Although the sex ratios of the juries have improved significantly in this timeframe, the distribution of women and men among the prizewinners unfortunately still has a long way to go to reach 50:50. That’s why we want to encourage more female artists to submit their works!

Gerfried Stocker: Of course, the composition of the juries is just a step in the right direction and I realize that a lot more has to be done. But the measures we’ve already implemented have made an impact in other competitions and artist-in-residence programs that we organize and for which there are special ad hoc juries.

For instance, the STARTS Prize launched in 2016 by the European Commission went to Iris van Herpen and to Artificial Skins and Bones, a collaborative project that was launched by two individuals, one of whom is Prof. Mika Satomi, and women made up more than half of the project crew.

The juries of the European Digital Art and Science Network under the aegis of which we’ve staged programs jointly with CERN, ESO and ESA, have awarded residencies to artist Maria Ignacia Edwards, the artists’ duo of Ruth Jarman und Joe Gerhardt and an artists’ collective made up of Jan Bernstein, Juliane Götz und Sebastian Neitsch. They were invited to spend time on site at these institutions’ facilities and derive inspiration there for their artistic work. In 2017, the ESA will host a residency by artist Aoife Van Linden Tol and collaborate with artist Sarah Petkus. 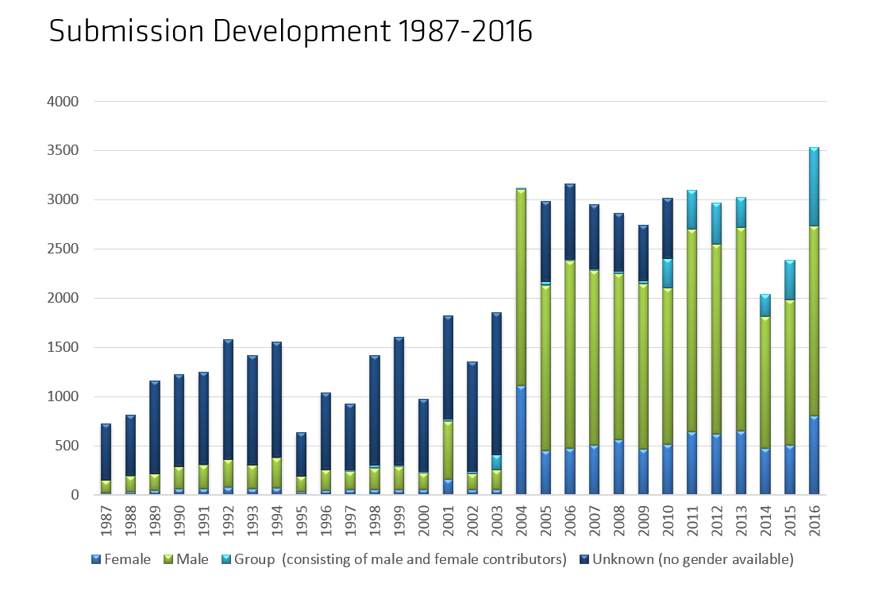 Let’s get back to the Prix Ars Electronica. What’s the trend with respect to female and male entrants and prizewinners since 1987?

Emiko Ogawa: It’s still true that female Golden Nica winners are far fewer than male winners. However, according to the statistics, I really would like to make it clear to people that female submitters are decisively lacking!

This year, our team is actively seeking female projects. Additionally, we would like to ask the public to share their knowledge. We have a platform to collect “public nominations” of submitters via prix.aec.at/nomination. If people are aware of interesting projects that we don’t know about, I would like to ask them to post them, and our team will contact the artists to request their submissions!

And of course not only female artists in the already well-represented regions … we’d like to attract more artists in Africa, the Middle East, Southeast Asia and South Asia. On our Prix map you can see all winners depicted geographically, so it’s obvious that there are fewer winners from these areas. 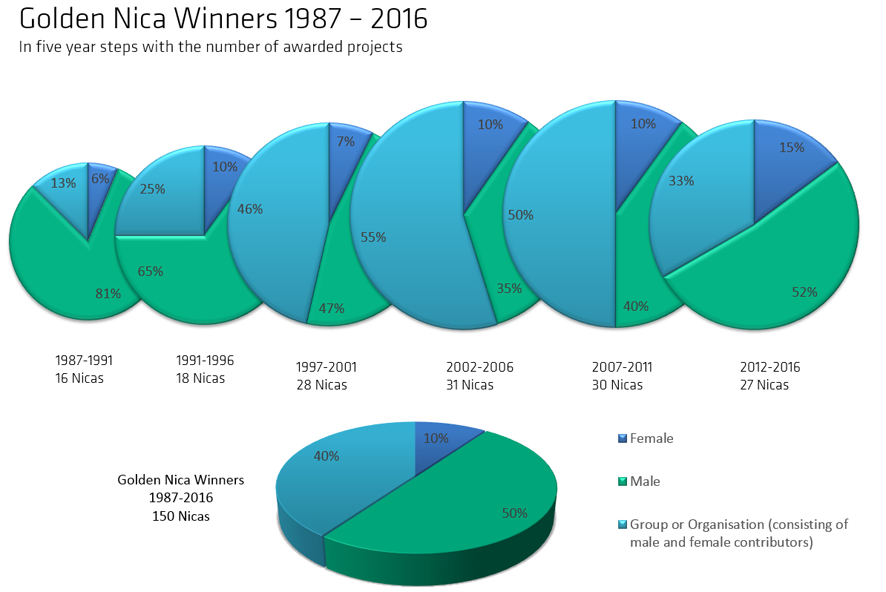 Gerfried Stocker: I think we’re on the right course but, needless to say, this is no reason not to redouble our efforts. A year ago, we initiated the Women in Media Arts project and in September 2016 we went online with a database presenting information about all female media artists who’ve been singled out for recognition by the Prix Ars Electronica or have been selected to participate in one of our other programs.

With more than 1,800 entries, it’s, as far as we know, one of the largest repositories of data about female media artists. We hope that this will also be a useful, valuable source of information that will benefit other curators and festival producers. In the next phase, we’re going to expand the database, whereby female artists can now create their own entries and update their information. Plus, we’ll be working together with other already-extant initiatives.

Do you know female media artists or are you yourself one? You’re cordially invited to enter the 2017 Prix Ars Electronica, to pass this invitation on to your acquaintances or to submit recommendations to us at prix.aec.at/nomination. There’s no entry fee; the submission deadline is March 13, 2017. Complete details are online at ars.electronica.art/prix.