Brains for Everybody: Through the Internet via the Power of the Mind 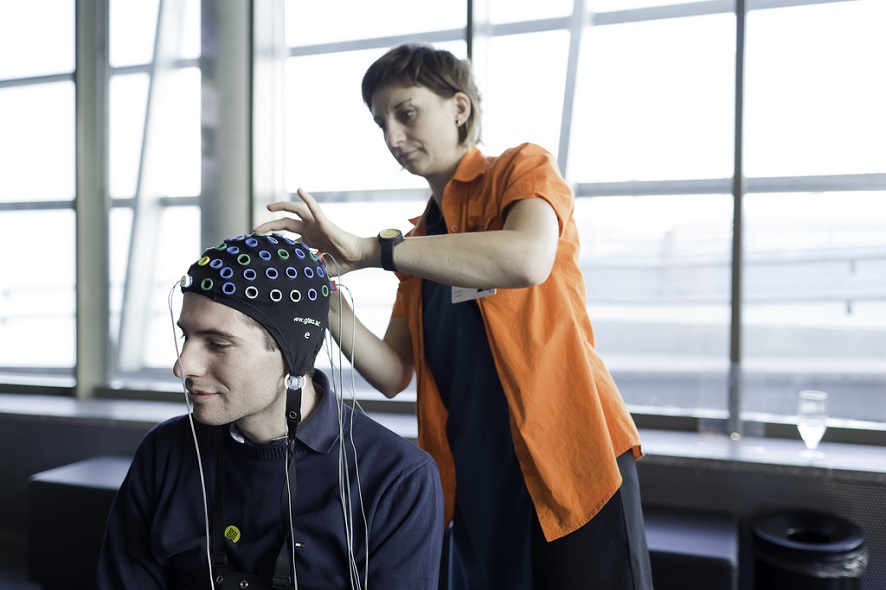 The Ars Electronica Center has been hosting talks about research on the brain for seven years now. The most recent speaker in this series entitled “Brains for Everybody” was Dr. Selina Wriessnegger of the Graz University of Technology, who explained what brain-computer interfaces (BCIs) are all about and how they can be used to get about online.

We sat down with this scholar to find out more. 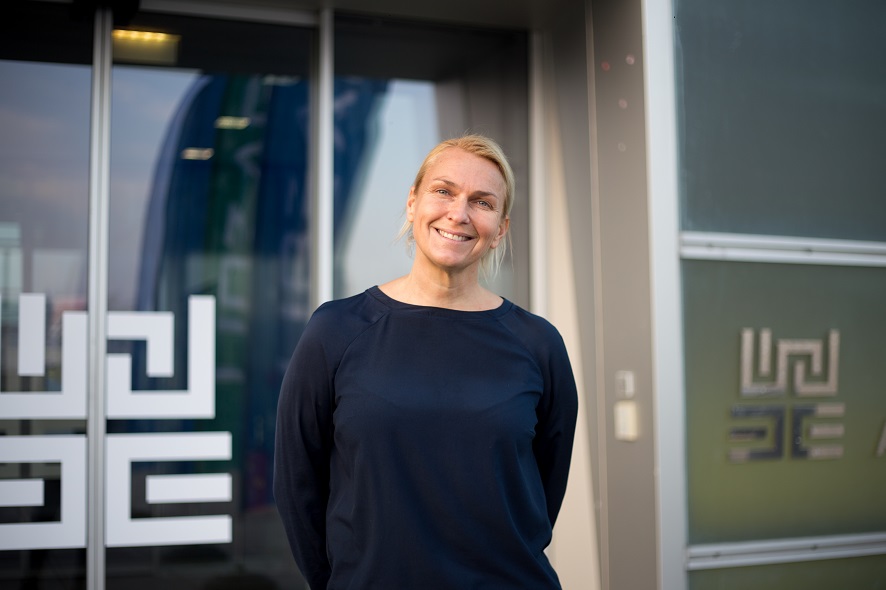 So, let’s start with the basics—What actually is a BCI?

Selina Wriessnegger: A BCI is an interface between the human brain and a computer. To make the connection, we use electroencephalography (EEG) to measure the human brain’s signals. That’s the brain interface. Then these brain signals are analyzed and decoded by a computer. The computer learns that certain signals mean certain movements or certain cognitions, and from them the computer generates a control signal. There are particular algorithms that generate a control signal—for instance, to steer a wheelchair or a neuro-prosthesis. Thus, BCI entails measuring brain waves and processing signals. 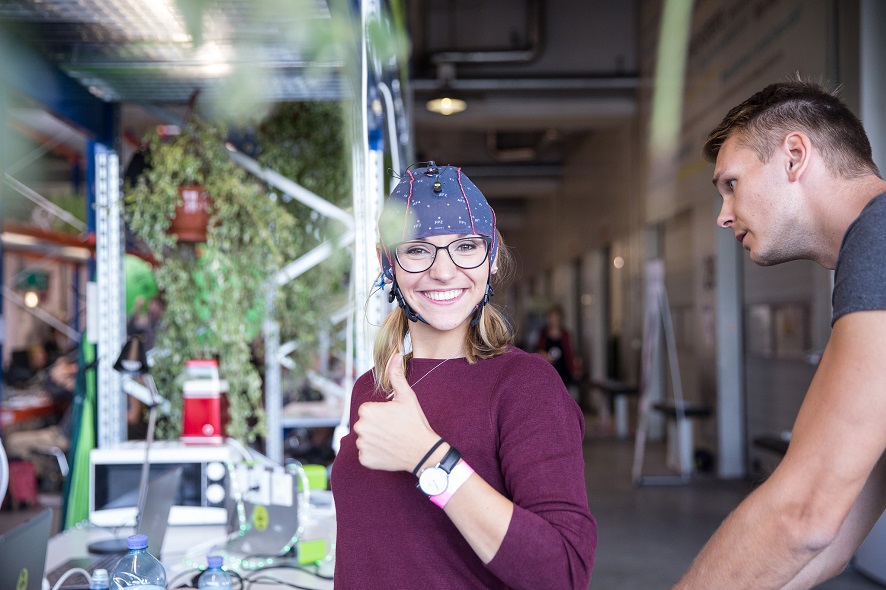 To put this is simple terms—A person can control something with his/her thoughts.

Selina Wriessnegger: One controls with thoughts, but it’s not as if the thoughts are being read. To give you a concrete example: when you think about a cat, that can’t be read by a BCI. But when you think about moving your right or left hand—that is, executing a motor movement—the computer can interpret that. There’s a special pattern in the brain that is recognized and processed by the system.

Selina Wriessnegger: It’s simply not possible at present to make abstract concepts visible via EEG. There have been studies with other procedures such as functional magnetic resonance imaging whereby letters of the alphabet can actually be recognized. So with the right equipment, you can tell whether a person is thinking about an A, a B or a C. With EEG, that’s not possible? 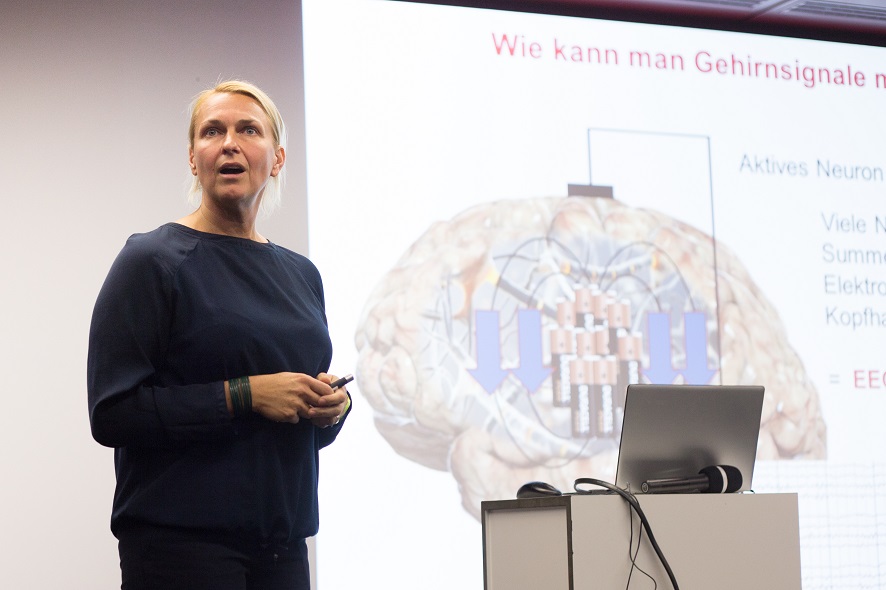 How are BCIs being utilized at present?

Selina Wriessnegger: First and foremost, they’re developed for a patient to control a neuro-prosthesis or for locked-in patients—for example, people suffering from amyotrophic lateral sclerosis (ALS), a condition in which the motor neurons cease to function. The initial phase is degeneration, in which the muscles can be moved less and less; the final stage is a locked-in state in which the individual is cognitively present but unable to communicate. Optimal is such a case is a BCI, because it enables patients to give certain kinds of answers. It’s encoded in such a way that, for example, thinking of a right-hand movement is understood by the computer as a YES and, conversely, left means NO. This is the simplest option, but more complex communication is possible too. 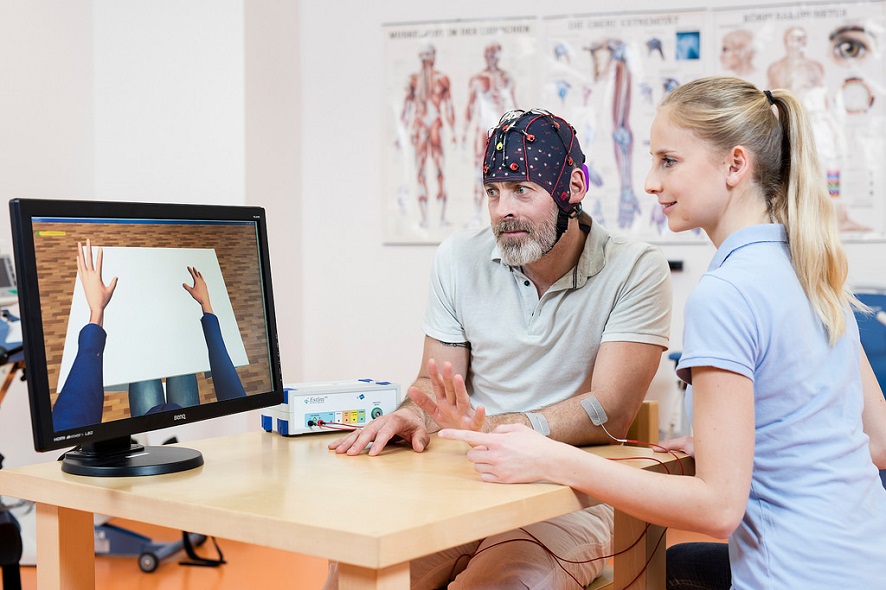 Aside from the medical field, are there any other areas in which this technology is being used?

Selina Wriessnegger: There are also applications for healthy people! The gaming industry has already started integrating this technology to provide gamers with another sense, as it were, in addition to hands and the feet. Or a player can manipulate an avatar in a computer game using only his/her thoughts. The title of my talk, “Through the Internet via the Power of the Mind”, refers to another application—using a BCI to surf the Web. Patients whose eye muscles are still intact can use a special BCI that recognizes which icon the user is looking at. For focusing, there’s a special component in the EEG, and this information is used as a control signal. A lot of technology goes into this. The website has to be specially set up with tiny icons and much more.

We’ve also developed a system that lets you compose music with thought power. The user looks at a matrix on which, instead of letters, there are musical notes s/he can use to write a piece of music on paper. That was ultimately an application for patients, but we first tested it on healthy individuals.

There’s also an innovative research approach that combines a BCI with augmented reality. For instance, a user can learn a foreign language with an avatar and a BCI, and the student’s brain waves are monitored during the learning process. So, for example, when the individual gets tired, there’s a special signal in the brain, which the avatar notices and adapts the teaching accordingly—repeating what was last said or offering to take a break. 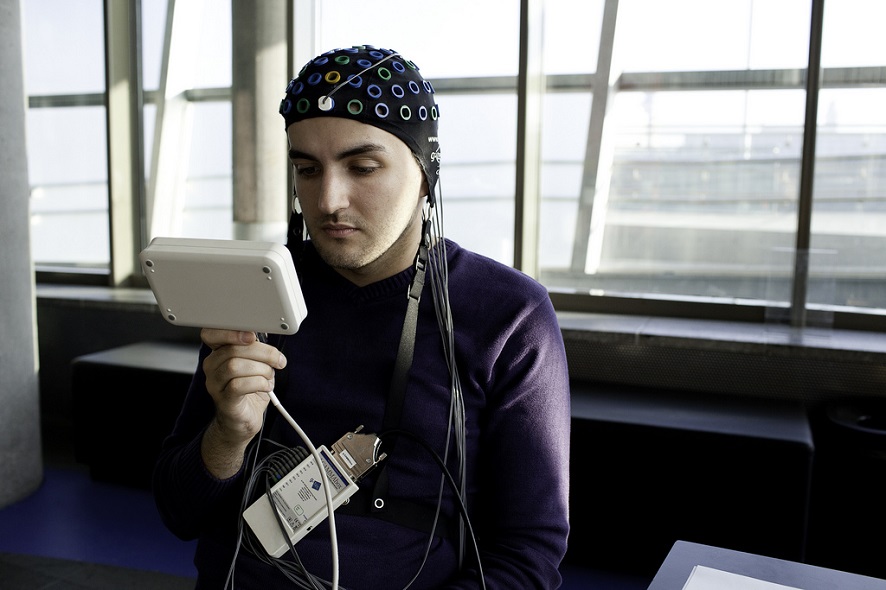 You’re working on BCIs at the Graz University of Technology. What fields do you specialize in?

Selina Wriessnegger: I basically do fundamental research. I don’t concentrate of improving the algorithms or developing new interfaces; I work more on the brain signals themselves. How can they be optimized? What tasks can be assigned to test subjects in order to find good patterns for the classification of the subsequent control signals? What exactly takes place in the motor cortex when a person thinks about a movement? Or should the act of imagining a physical movement be made more complex? What about attempted movements? What can be done to improve the patients’ performance? How can we provide better training conditions? 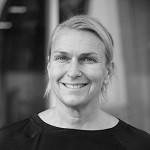 Selina Christin Wriessnegger is Assistant Professor at the Institute of Neural Engineering (BCI-Lab), Graz University of Technology, Austria. From 2001 to 2005 she was PhD student at the Max-Planck-Institute for Human Cognitive and Brain Sciences and received her PhD from the Ludwig-Maximilians University. During that time she spent one year in Rome as research assistant at IRCCS (Fondazione Santa Lucia), Laboratory for Human Psychophysiology. From 2005 to 2008 she was University Assistant at the Karl-Franzens-University Graz, Section Neuropsychology. From 2009 until May 2016 she was senior researcher at the Institute of Neural Engineering (BCI-Lab). In 2017 she was visiting professor at SISSA (Scuola Internazionale Superiore di Studi Avanzati), Trieste. Her research interests are subliminal visual information processing, neural correlates of motor imagery, novel applications of BCIs for healthy users, passive BCIs and embodiment of language acquisition.