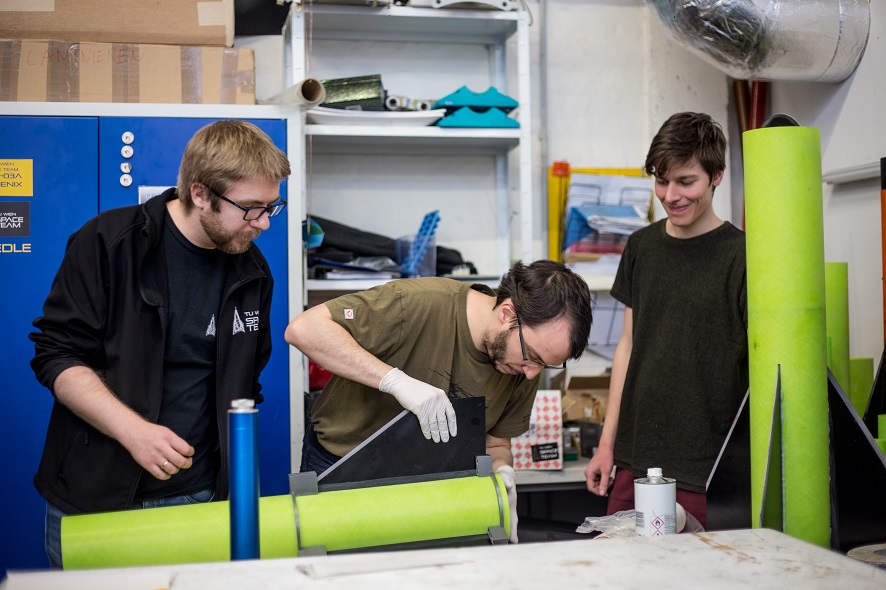 In the first nationwide CanSat Competition in April 2018, teams of students from throughout Austria will face off to see who has constructed the best cola-can-size satellite. So far, so good! But how will these mini-satellites—called CanSats—reach the altitude necessary to display their capabilities? Well, they’ll be launched by rockets, of course! And just like with the big satellites that orbit Earth and constantly gather data, real space technology is being deployed here too.

One of the constructors of the rockets that will be used for the CanSat launches in April is Christian Plasounig, director of the Space Team at TUW–Technical University of Vienna. To prepare for the CanSat Competition, he and his crew are already hard at work engineering the rockets that will transport the mini-satellites into the airspace above an Austrian airfield. In this interview, Christian tells us more about how to build a miniature rocket, why they don’t differ all that much from commercial rockets, and how the crew got their hands on the components for these flying objects. 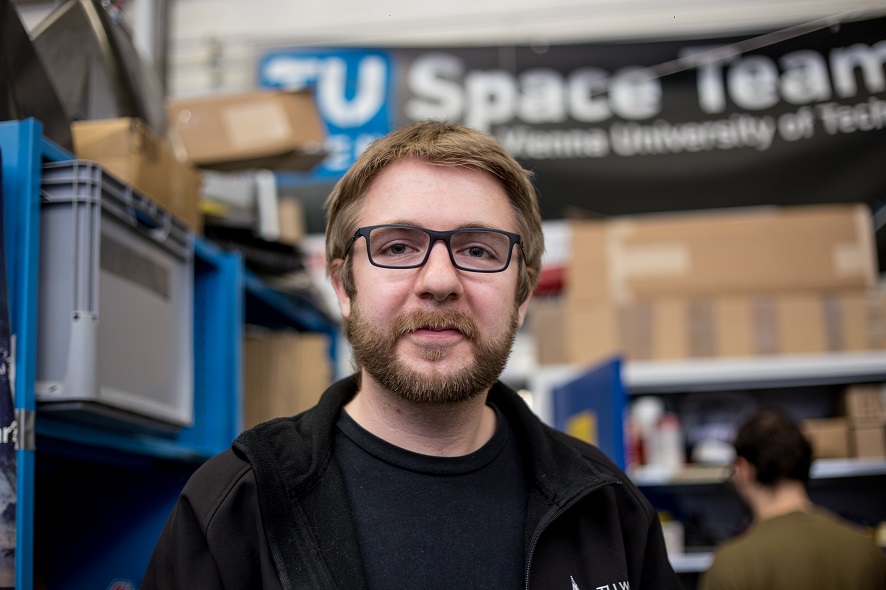 Let’s start with you telling us something about your crew?

Christian Plasounig: The TUW Space Team is a working group made up of students with a wide variety of majors. Our ultimate goal is to establish aerospace engineering at TUW, where there’s currently no degree program in this field, but there are several students interested in doing something in this area. Electrical engineering, mechanical engineering, physics—we’re an interdisciplinary group. Our big mission is to launch opportunities to build rockets and satellites at TUW!

For the CanSat Competition, you’re building the rockets that will take the mini-satellites aloft. How does the construction of these small rockets differ from making the ones that, say, NASA uses?

Christian Plasounig: There are several significant similarities and a few major differences. One big difference is that our rockets are aerodynamically stabilized, so they ascend vertically because they develop a relatively high speed and have fins and a tail unit that make them fly straight. We use motors with a relatively short combustion time of only a few seconds, whereas a commercial rocket’s engine fires for half a minute or more. In other words, our rockets are considerably smaller and remain within the Earth’s atmosphere.

Generally speaking, we differentiate between sounding rockets and full-size rockets. Sounding rockets don’t fly into orbit; they remain within the planet’s gravitational field so, after they finish thrusting, they fall back to earth. If, however, a rocket can attain orbital speed, then it would remain in orbit. Our rockets don’t do that; instead, they descend to the ground.

Is this a controlled descent?

Christian Plasounig: That depends on how it’s conceived. You can influence certain parameters. Theoretically, you can influence the aerodynamics with so-called canards—wings that can be adjusted in flight. If you use a motor with a somewhat longer combustion time, then you can influence the so-called thrust vector, which means that you can direct the rocket’s exhaust as a means of steering it, and that enables you to control the rocket’s ascent. Then, at the zenith of its flight path, our rockets release a parachute that lets it descend safely to earth. You could also steer the parachute, but this is strongly dependent on the chute’s lift-to-drag ratio, so the best you can do is to specify a certain target radius.

What materials are used to construct your rockets?

Christian Plasounig: Various materials. For the structure, mostly fiber composites are used—that is, fiberglass, glass-fiber reinforced plastic or carbon fiber materials. Fiberglass is usually used in applications that entail radio transmissions because carbon fiber disrupts the communications. But as far as strength is concerned, carbon fiber is somewhat superior to fiberglass. These materials are used because they’re extremely light. In case of a crash, fiber composites don’t cause as much damage as, say, metals, so they’re less dangerous. 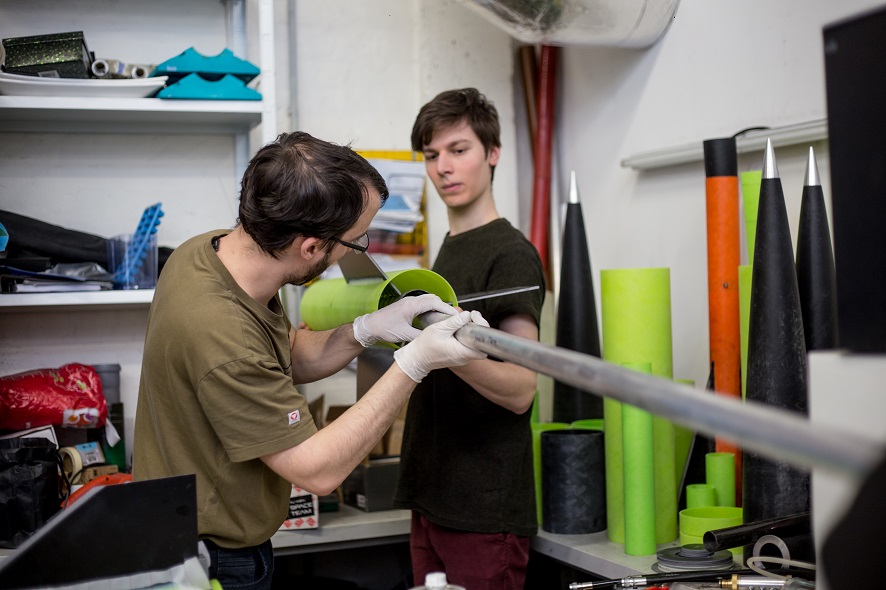 How do you produce the individual components of the rockets?

Christian Plasounig: That depends on what we want to construct and what our particular emphasis is on. We have to develop and produce almost all of the components in-house. For the carbon fiber and fiberglass components, we construct forms that we then laminate and finish in cooperation with our corporate sponsors. Then, the parts go into an autoclave, an oven with a vacuum feature, in which the material is hardened under very high pressure and temperature. There are also ready-made components that can be purchased, or we can order fiberglass sheets that we cut ourselves. Individual components can be produced with a 3-D printer—if this is feasible and makes sense. 3-D printed parts can also be used as a basis for other parts or for a more complex assembly. Certain things can be fabricated by one of our sponsors. And then there are parts that can be turned out with a kit that you can buy. The essential components are formed and slotted in advance, but a lot of work goes into this nevertheless.

Because the CanSat rockets have to be pretty large and they’re mainly being used to launch a payload, we decided to use a kit as the basic prototype. So, there’s less focus on the rocket’s construction; this is more about having a means to an end—a rocket to launch a payload weighing about two kilos to an altitude of at least a couple of hundred meters to a kilometer at most. 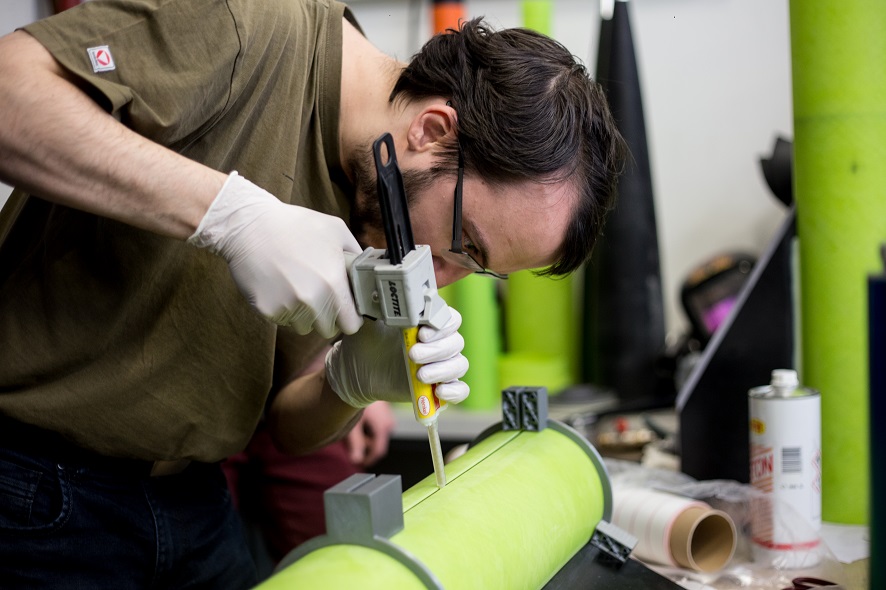 What do they have in common with commercial rockets?

Christian Plasounig: We need on-board electronics since we have to monitor the entire flight—from the moment of launch until it reaches its zenith. And this is the same as a commercial rocket until it reaches orbital altitude. Sensor data has to be recorded in real time and the flight path has to be calculated by the on-board computer in order to ascertain what state the rocket is currently in. Accordingly, separation charges and other such devices have to be fired. This is one of the major commonalities. Another thing that all rocket launches have in common is: You have only one chance! And this is a difference to almost all other fields of engineering. In the case of a rocket launch, I push a button and everything—literally everything—has to work. The failure of a single component can mean the end of the entire mission. The rocket could crash.

Basically, if everything goes as planned, are your rockets reusable?

Christian Plasounig: Yes. Except for the propellant—which burns up, of course—every component can be used again. If you prepare the propellant load in advance, a rocket can be relaunched only an hour after a flight. 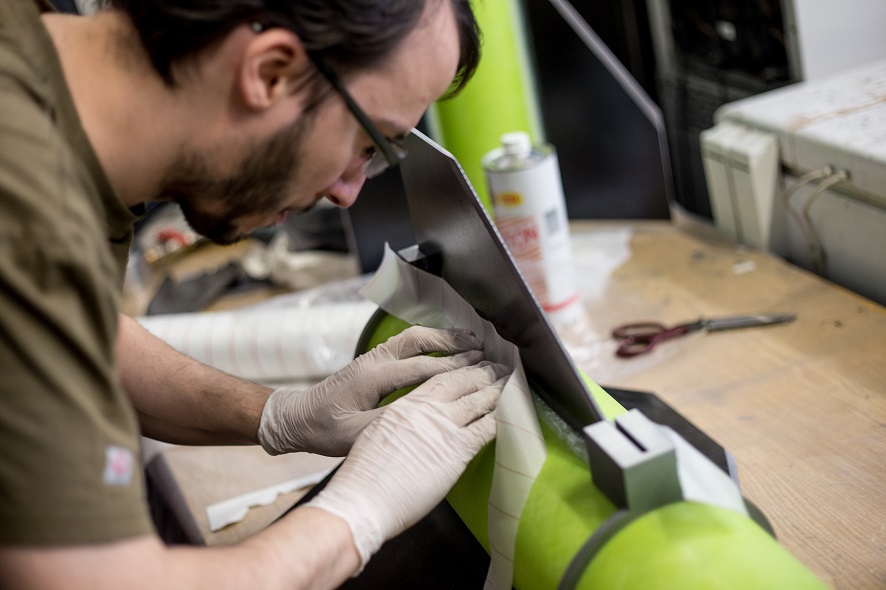 Are you testing the individual components prior to the CanSat Competition?

Christian Plasounig: Doing so always entails a certain amount of risk. We are certainly aware of the fact that we’re launching rockets and there’s always a chance that something will go wrong, regardless of whether we do testing or not. But of course we’re conducting test flights prior to the competition. This takes place on various levels. First, we’re testing the electronics, which can be done independently. These are individual component tests, so-called unit tests, in which you check how the individual components interact, whether everything functions according to plan, whether it’s all A-OK along the radio path, whether the communication with the rocket functions, whether all the data gathered by the on-board computer are correct—a lot of this can be done on the ground. There’s a lot to be done on the mechanical side too. For example, on the ground, you can do separation tests to see if separation actually occurs when the separation charge is fired, and you can check whether all the parachutes deploy properly.

So, you can get a pretty good estimation of whether the flight is going to come off as planned.

Christian Plasounig: Right. If you do thorough, exacting preparation work, the probability is very high that everything will function. Nevertheless, there are occasionally situations in which something occurs that was unexpected or that leads to the failure of a component, and this is out of our control. For instance, a motor might not function. When motors are produced in a factory, there is a certain possibility that they’re defective because they simply can’t be produced with 100% reliability. This probability is very slim but, of course, failure is possible. It can also be that something doesn’t work because it was incorrectly assembled. Communication problems can develop, a cable is improperly positioned, or an item on a checklist is overlooked. We work very intensively with checklists so that the most essential criteria are fulfilled, but in that hectic time before a launch, it can happen that something is inadvertently omitted.

The CanSat Competition is set for April 9-11, 2018. Details are online at the official CanSat website.