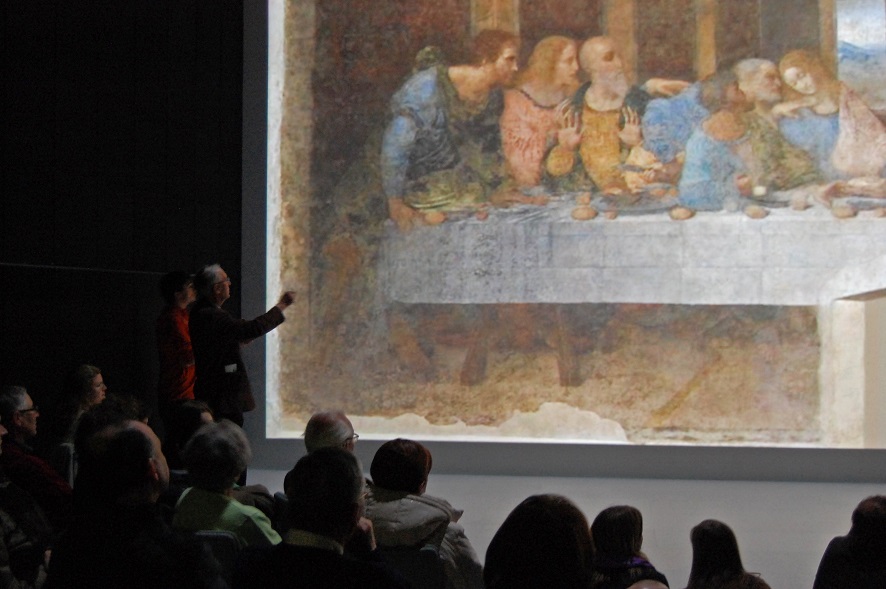 Few works of art are as well known as Leonardo da Vinci’s The Last Supper. The latest boost imparted to the public’s fascination with this fresco was the publication of the novel “The Da Vinci Code.” At the next Deep Space LIVE on March 29th, art historian Lothar Schultes and theologian Michael Zugmann will shed light on this work’s many secrets.

In this interview, art historian Lothar Schultes discusses why The Last Supper’s colors are now so pale, the difficulties that restoring this work of art has entailed, and why it’s such a rewarding experience to view the classics of art history on Deep Space’s 16×9-meter projection surfaces. 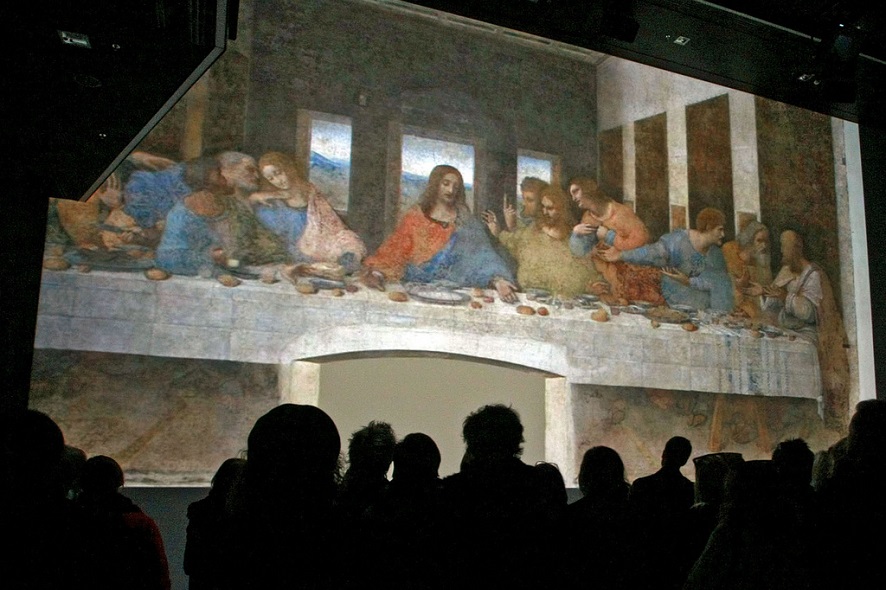 What is the art historical significance of da Vinci’s depiction of The Last Supper?

Lothar Schultes: The Last Supper is no doubt one of the world’s most recognizable as well as most reproduced works of art. Lately, with the blockbuster film “The Da Vinci Code,” it’s even gotten hard for the convent staff in Milan to deal with the crowds. The upper attendance limit is just over 1,000 spectators per day; visitors have to make a reservation weeks in advance, and a viewing lasts less than 15 minutes. That alone is good reason to behold this image here in Deep Space, where we can scrutinize it as long as we wish. Actually, we can almost see it better than the original because we can zoom in on details. That means we see the fresco as if we were standing right in front of its scaffolding. Only the restorers can do that with the original!

Plus, there’s the fact that The Last Supper is actually in a catastrophic state of repair. While Leonardo da Vinci was still alive, it was already apparent that he had committed a technical blunder. He used a gypsum base which is totally inappropriate for fresco painting, and it didn’t take long before the plaster started to flake off. Soon after the fresco’s completion, the first reproductions were already being made—the earliest, done by one of his students, is dated 1520, I believe. It’s now on display in London, where you can see how brightly colored the image once was. You have to imagine that other paintings too—the Mona Lisa, for instance—used to be much brighter than they are now. The fact that we can zoom in so tightly in Deep Space gives us a feeling of how the original once was. 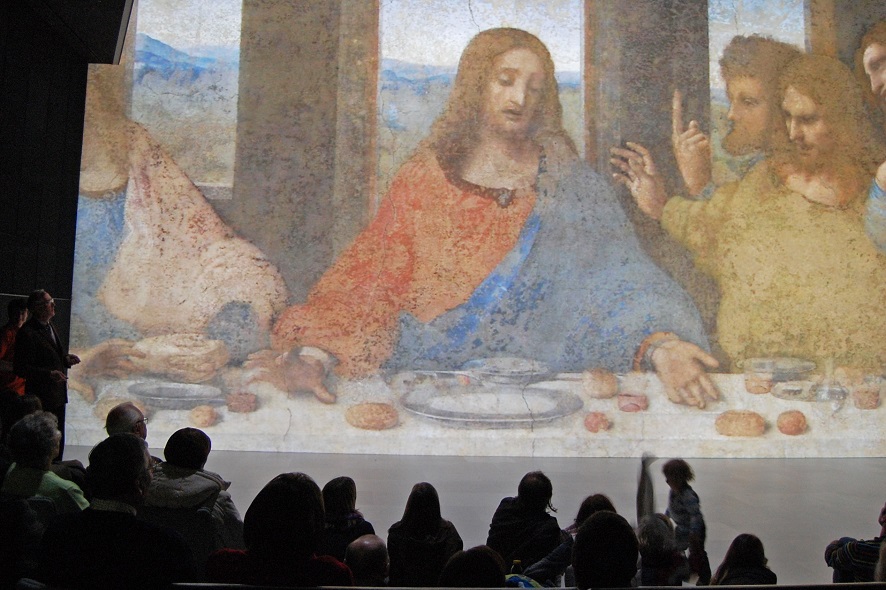 This work of art is also famous for its composition and painting technique. What do you find most fascinating about it?

Lothar Schultes: Actually, every one of Leonardo’s works was something novel in art history. He never did anything that conformed to tradition. Of course, there had been previous depictions of The Last Supper—for instance, the one by Ghirlandaio, which Leonardo surely was familiar with and it was also quite similar to his. What was new was the painstakingly calculated central perspective that places Christ precisely in the middle. The vanishing point is approximately at Christ’s temples, which endows the work with almost a classical dimension. To his right and left are groups of three apostles. These groupings are also something new. They had simply been lined up before; in Gothic depictions, they just sit next to each other. But Leonardo just made it so dramatic! Nevertheless, it’s composed in a triangle, the godly form in the Renaissance. Within the groups, each apostle is different, and this is precisely what makes it so great—that it shows such different types of human beings. For example, the figure purported to portray the Apostle John is, according to some observers, actually Maria Magdalena because this person appears so feminine. John embodies gentleness. There are also apostles in states of the most extreme agitation. Some of them appear as if they were even ready to fight to defend their Lord. This broad spectrum of feelings is truly something new. And it’s done without theatricality!

Could you tell us a little about the restoration of the work?

Lothar Schultes: There was a very loud wake-up call in the 18th century, when observers thought that The Last Supper would be lost because the painted surface was beginning to flake. At that time, there were several attempts to preserve the image, all of which were based on the misconception that it was painted with oil. But it was done in tempera, so the conservation efforts just exacerbated everything! But the worst attempt was in the 19th century, when a restorer attempted, and failed, to remove the painting. That would have been possible technically, but they would have had to use a very wide saw or a saw wire to separate the image from the wall. However, there’s masonry to the left and right of the fresco, so this would have entailed sawing The Last Supper into pieces and extracting each one individually.

In the early 20th century, the image was successfully stabilized, so at least it was conserved. The last big restoration was completed in 1999, when all the added “ingredients” were removed. Nevertheless, The Last Supper is a mere shadow of what it originally was. When you compare it to the many copies on which all the colors are still present … the copy in Vienna’s Minorite Church, a mosaic, gives a very good impression, but the best copy really is the one from 1520 in London. 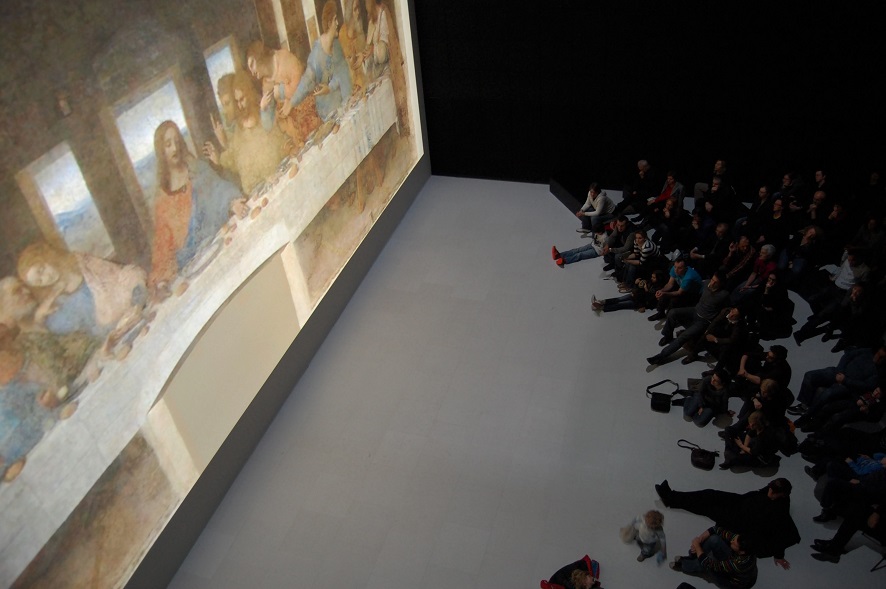 What details can be seen in Deep Space that are invisible to the naked eye?

Lothar Schultes: For one thing, you can see the puncture mark from the nail Leonardo used as an aid to creating true perspective. He undoubtedly attached lengths of string to it; that’s obvious. In recent years, there’s been a very amusing discussion about what the apostles are eating. In Deep Space, you can make out what they had on their plates. But I’m so disappointment to have to say that the work is in such terrible condition, especially in these areas, that you really can’t tell what they dined on.

The Last Supper is in a fragmentary condition. There are some areas in which, by chance, the colors are relatively intact, and there are others where you can see that the restorers have failed and also that the image has been marred by acts of vandalism. When Napoleon occupied Milan, his cavalry’s horses were quartered beneath The Last Supper. Soldiers threw stones at the fresco, scratched out the apostles’ eyes, severe mechanical damage was inflicted.

What’s particularly appealing about Deep Space as a venue for a talk by an art historian?

Lothar Schultes: I think it’s fabulous! The fact is that, even in a conventional museum, works are no longer in their original context, especially in light of the fact that many museums are modern architectural edifices. We present Gothic images in front of a white wall, a totally foreign context that brings out completely new facets of these works. The lighting is different too. The Last Supper was illuminated by light from the left window of the church, and Leonardo even took these circumstances into account. When a work is presented in Deep Space, some of this is lost, of course, but then again there are advantages in other respects.

Another aspect that I very much appreciate here is the ability to reach spectators, some of whom might be rather standoffish about visiting a museum and, accordingly, have certain inhibitions about viewing famous works that aren’t so easily accessible. The original of The Last Supper is something rather exclusive, and viewing it is expensive. Here, I can just pop in off the street, and the price of admission is very affordable, so that’s another impediment that’s been eliminated here.

Deep Space LIVE “The Last Supper” is set for March 29, 2018 at 6 PM in the Ars Electronica Center. Complete details are available on our website.