Solutions in Leoben: A mine tour, a wire-rolling mill, and a beer museum 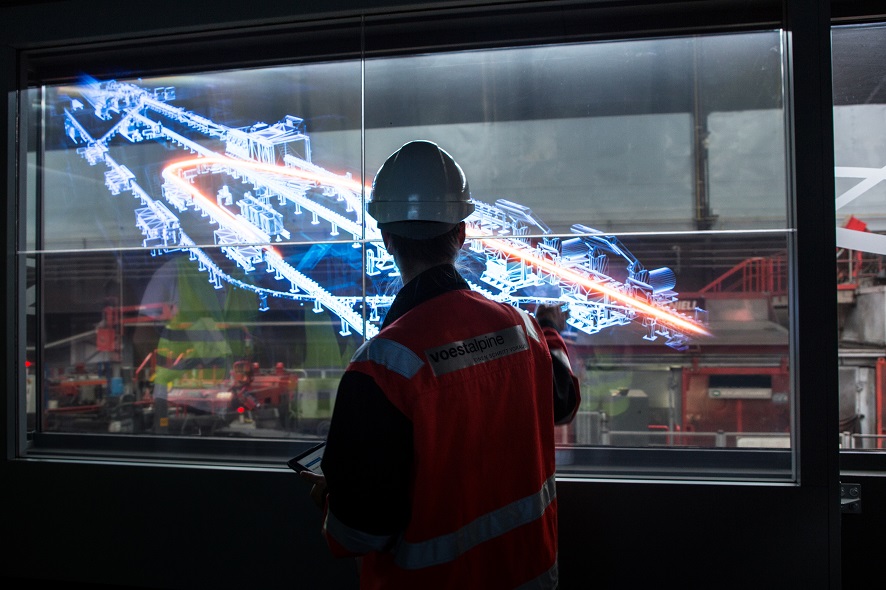 Over the last few years, the Ars Electronica Solutions team has increasingly been heading south, right into the mountains, to Leoben: over time, the team has implemented several projects there for a wide range of customers. For example, the giant “Hauly” truck at Erzberg Adventure, an old mine turned tourist attraction, which used to transport rock down from the mine and today takes visitors through the adventure tour, now features informative screens that visually supplement the tour; the Gössseum brewing museum uses several interactive and digital installations to show how hops and malt turn into beer; and in the world’s most modern wire-rolling mill, the voestalpine Wire Rod in Donawitz, transparent screens and sliders explain the processes necessary to turn thick steel into the finest wire.

Claus Zweythurm, Projektleiter, Stefan Dorn, Media Designer, and My Trinh Müller-Gardiner, Media Designer, from the Ars Electronica Solutions Team tell us more about the various Leoben projects in this interview. 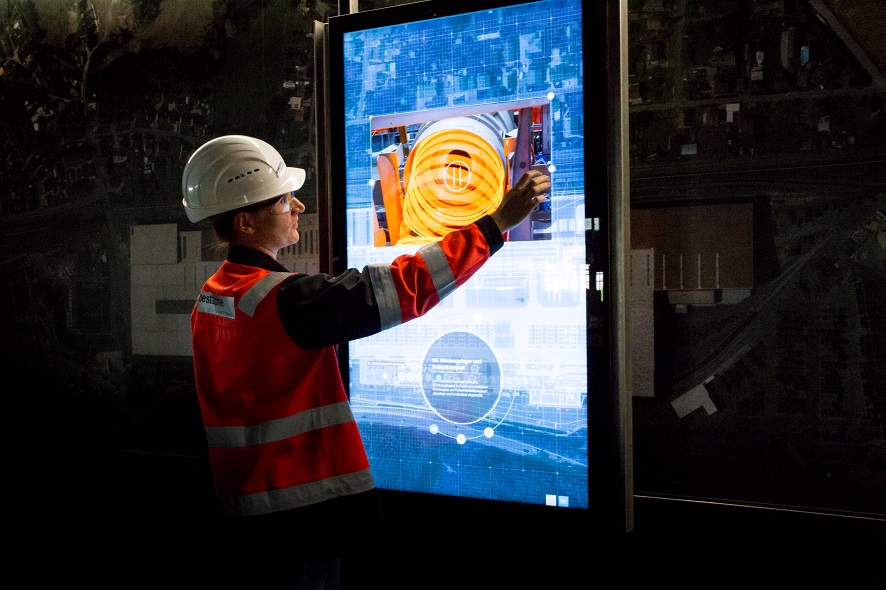 Several projects were just implemented in Leoben by Ars Electronica Solutions. One is the Erzberg Adventure – what’s that about?

Claus Zweythurm: The team from Erzberg Adventure wanted something you wouldn’t see at every mining tour. So they approached us and asked if we could think of something for their mine. In the end, we developed a way to digitalize this mine tour, starting with the valley station. That’s where the ticket counter is, and where visitors gather to get on the Hauly, an adapted heavy-goods vehicle, which takes them through the mine. So we began fitting the valley station out with infoscreens where you can read information about activities or the restaurant. The most interesting thing in the valley station is the central piece, a big screen that shows the gradual process of mining the Erzberg. You see how the mountain looked in 1900, 1848, 1970, at different times. People can see the Erzberg through time while waiting for the Hauly.

What exactly is a Hauly?

Claus Zweythurm: It’s a gigantic truck that was used for transporting the ore mined from the mountain each day. There were demolitions where the ore, or the composite rock, was blasted out of the mountain. This rock was dumped in the Hauly and transported down. Now visitors can explore the Erzberg landscape on the Hauly. We mounted a screen in front of every seat that supplements what the guides are saying. We made videos on the various topics, such as surface extraction or extracting ore. The challenging part was that the screens had to be pretty tough because the Hauly is a great big truck that jerks around a lot. It’s hard to build something for it that doesn’t fall apart all the time! Normal electronics are not enough. The screens provide a really interesting added value; the visual support is a big win for Erzberg Adventure. 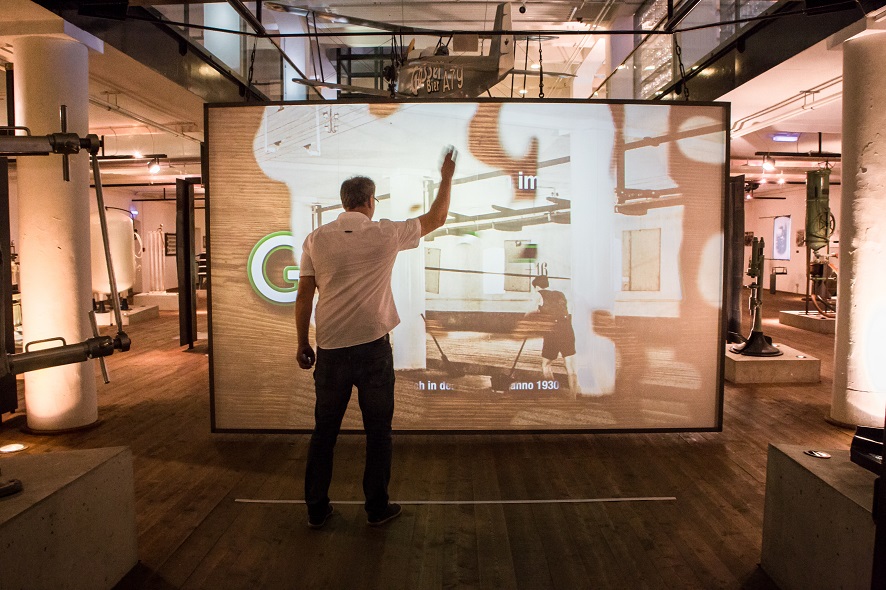 Ars Electronica Solutions also did some work for the Gösseum…

Claus Zweythurm: Yes. The Gösser brewery has a brewing museum in the Göss quarter. The brewing union that Gösser belongs to wanted to modernize the museum, so they came to us. The Gösser project was our first project in Leoben, it was actually the spark for the other projects in Leoben. We built digital installations in the original exhibition area that shows the brewing process from mixing the hops and malt to filling and delivering bottles. The installations are designed to bring all the interesting information to light and give the visitors a sense of the ease of the brewing process. For example, there’s an old fin cooler that we project the beer onto so you can imagine it better. We also provided an artistic representation of an old cask cellar to show that it was mainly women who were involved in the brewing process. There are also some interactive elements, we had a chance to use lots of different technologies.

The second step was the exhibition on the history of the brewery. For the upper level, we went for a traditional exhibition with various digital elements, but they are subtle. It’s a traditional museum and we wanted to maintain a lot of the analog elements. On the other hand there are also interactive installations like the Gösser-Wall, where people can call up all kinds of information in a way that’s playful. It takes a certain amount of dexterity because you control it with gestures. On the upper level there’s also a beautiful Quiz table that we made by cutting a old cask in half. 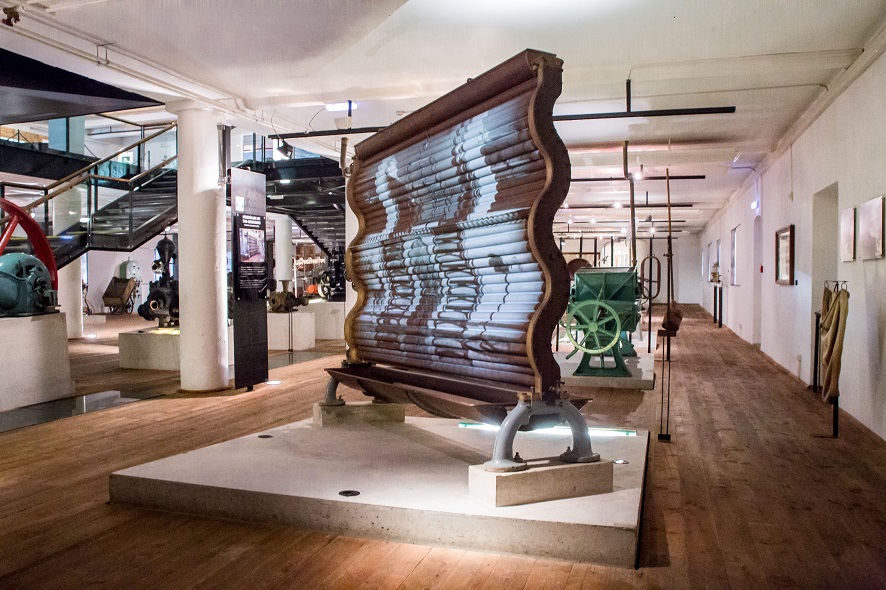 What was the most challenging part of that project?

Claus Zweythurm: The biggest challenge was definitely bringing a modern, digital concept into a rather dusty old museum and making sure it all felt like a coherent unit. It was also interesting to connect our future-minded ideas with Gösser’s tradition in a way that was harmonious. But I think we succeeded! 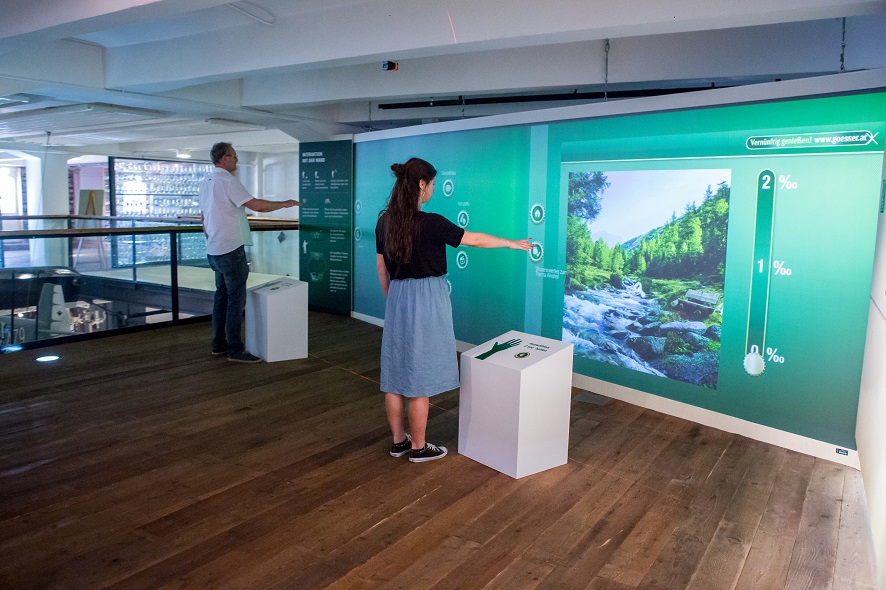 The project continued into a third phase…

Claus Zweythurm: Right. In that phase we reorganized a whole room and dedicated it to Gösser’s sponsorship, especially sponsorship of skiing. There’s also a digital guest book where visitors can record their comments for posterity. You can take a photo of yourself and insert it into the area around Gösser or the beer museum, and it’s sent to you by email. It wasn’t easy to do that without a green screen or something similar, but we got it in the end. 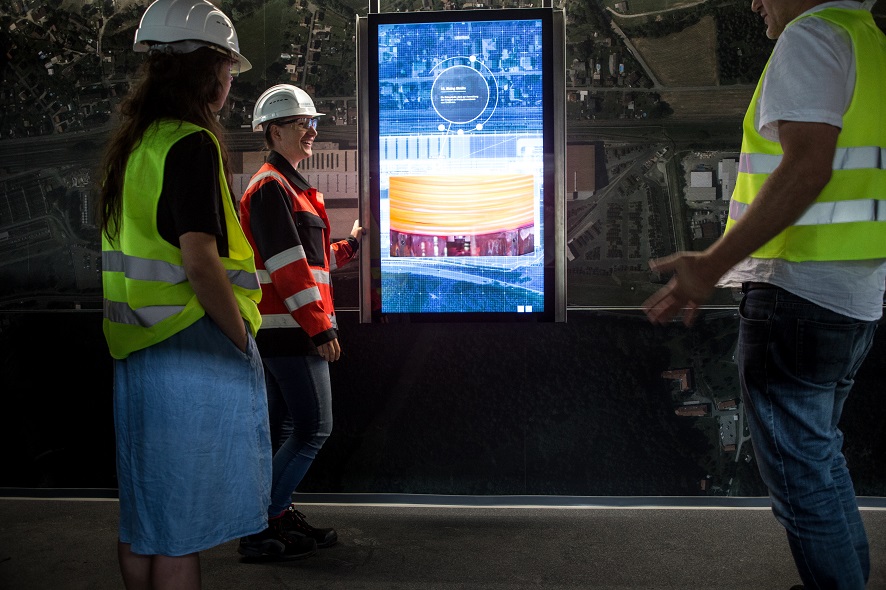 Stefan Dorn: voestalpine Wire Rod has built the most modern wire-rolling mill in the world in Donawitz. We worked together to develop and implement a concept for visitor tours.

My Trinh Müller-Gardiner: We developed a guidance system that goes through the mill and various info-containers with installations like a floor plan of the mill with sliders, an industrial scale, or a holoscreen.

Stefan Dorn: We wanted to provide visuals for processes that visitors don’t get to see. When you stand in this info-container and look at the actual facilities, it’s very abstract. The premises are very large and it’s hard to get an overview or recognize things. So we used the windows partly as a transparent screen to represent point of interest, explain them, and visualize them with data. You see a 3D-model of the work and can better understand what you’re actually looking at. 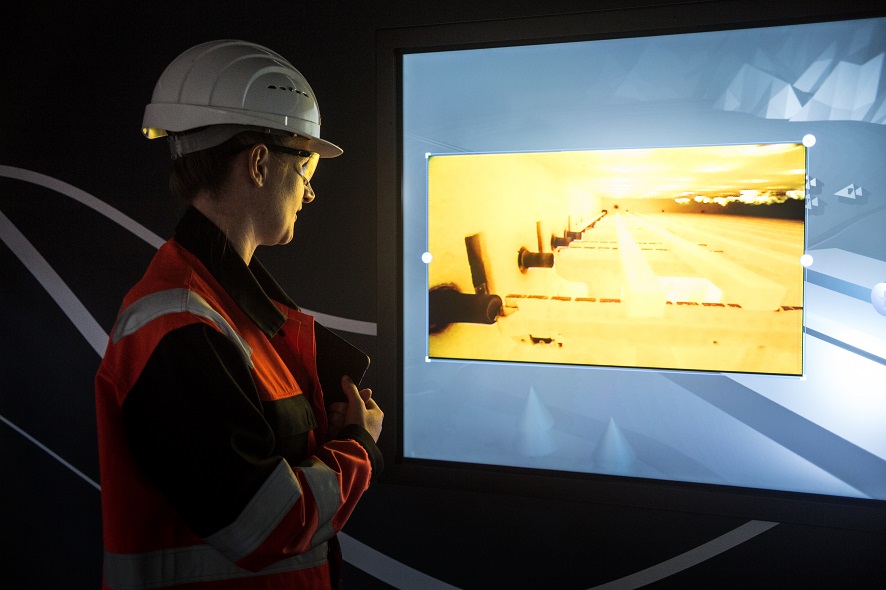 The industrial scale is back there…

My Trinh Müller-Gardiner: You can set different wire models on it and there’s a screen to show you how heavy they are and what they are used for.

Stefan Dorn: The scale is actually only a small part of this installation. We wanted to help people understand what is produced there because the mill is huge and hard to get a handle on. With the scale you can see right away what a particular wire is used for, for example for the auto industry.

My Trinh Müller-Gardiner: We also designed a slider in front of a floor plan of the mill that takes up an entire wall. It gives you an overview of the whole plant. The slider goes with a touchscreen and when you guide it to a given position, you get information about the production process in that part of the mill. 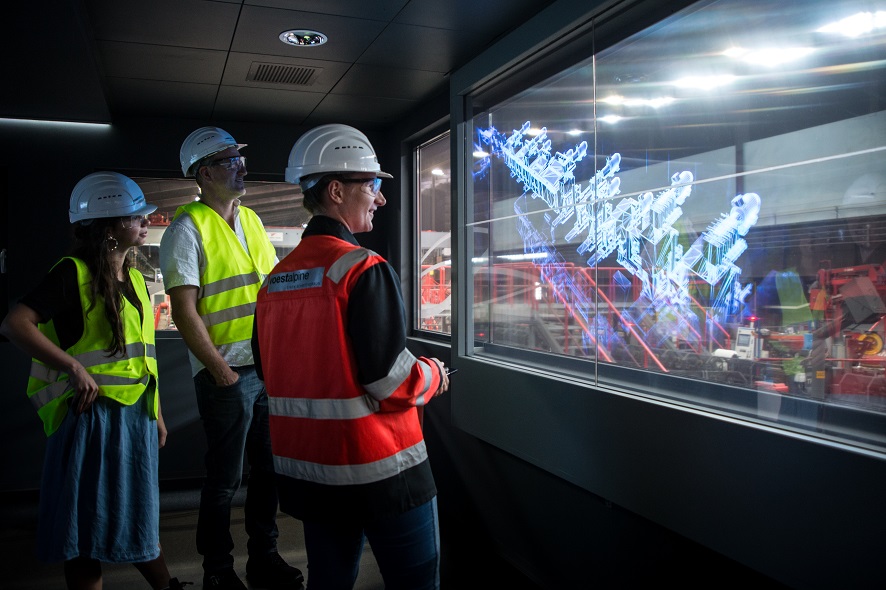 My Trinh Müller-Gardiner: We were very inspired by the tour we took of the mill to work out our concept, because the technologies and the entire plant were very impressive! We realized that we definitely wanted to work with the wire material and the wire rolling in the design. The waves in the guiding system come from the wires; they were the inspiration for the signage and the visitor tour.

Stefan Dorn: Two things that were definitely challenging were the safety regulations and the noise. It’s because of those that in many of the installations we tried to visualize things that visitors can’t physically look at for safety reasons or due to the temperature. Some of these processes take a long time in production. Visitors are only at the plant for a fraction of that time. At the holoscreen, for example, we show the 12 different production lines, the full scope of the process. It’s the first and only plant in the world that produces this way. We wanted to show what they can do technologically that you can’t see yourself.

Do you find it inspiring or limiting to have so many safety regulations to observe?

My Trinh Müller-Gardiner: Actually, no job is limiting. Because you’re always looking for solutions! Creative solutions.

Stefan Dorn: Of course there’s always a balance. Without any limitations it’s just too hard, because you have such an open mind that you can’t settle on anything. It’s fun because the challenges are always different.

You can find out more about projects by Ars Electronica Solutions on our website.