nobody gets involved: Marianne.von.Willemer Prize 2018 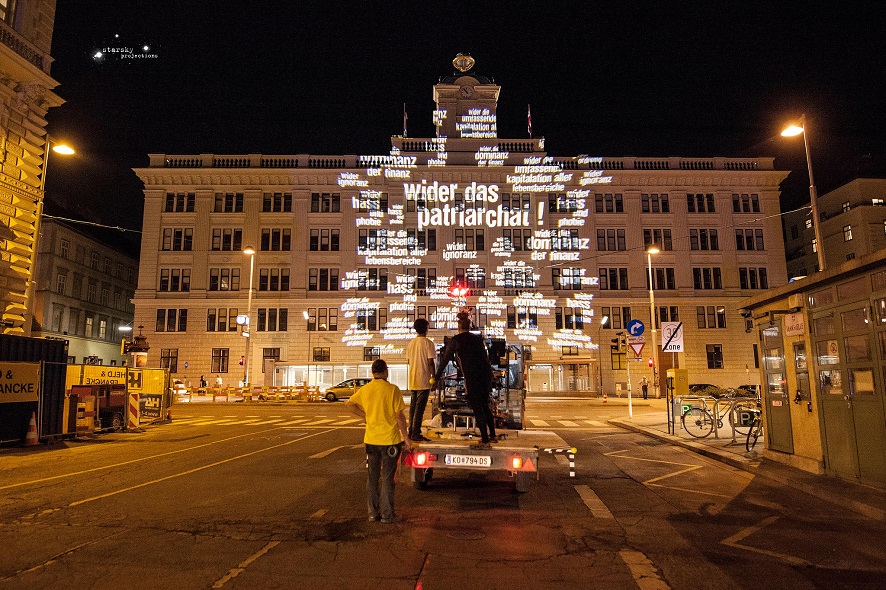 “zu den waffeln” (literally “to the waffles”, a wordplay on “to arms”) declares the façade of Gazprom, “zu Kurz gekommen” (literally “got a raw deal”, a wordplay involving Austrian chancellor Sebastian Kurz) say the giant letters on the Chancellery, “wider die totale kapitalation” (literally “against total capitulation”, instead of capitulation) on bank buildings. The white letters flow over the fronts of buildings, from one seat of power to the next. It is May 9, 2018 and the Guerilla Tour protest is making its way through Vienna, projecting witty resistance messages. And who is responsible? nobody.

“Somebody means anyone who has power, money, a function or any other kind of social check mark,” explains starsky, the artist. “Everyone else is nobody and basically doesn’t get to say anything.” The project “nobody gets involved,” rooted in feminism and social/cultural politics, unites society’s nobodies into a single persona and gives them a voice with humorous textual projections on selected locations in Vienna.

With this work, starsky won the 2018 Marianne.von.Willemer Prize for digital media. The prize, which comes with €3,600, is awarded every other year by the Women’s Office of Linz in cooperation with Ars Electronica and with the support of dorf TV. We met with starsky to learn more about it.

You won the 2018 Marianne.von.Willemer Prize for digital media for “nobody gets involved.” Tell us a bit about that …

starsky: The project is called “nobody gets involved” and it was organized, or is still being organized, by nobody. Nobody is a polyverse, free personality that anyone can take on—it’s totally open. It’s an anti-label, a label-free label, a zero, a blank space, nothing. Who is nobody? Essentially, everyone who is not somebody. Who is somebody? Somebody is everyone who has power, money, a function or any other kind of social check mark that means they are taken seriously and considered important. Everyone else is nobody and basically doesn’t get to say anything. All these nobodies are grouped into this one open person. Anyone can come and say: I’m nobody. That’s always OK.

The project has several parts – for the first part, instead of an exhibition at Künstlerhaus Wien, we installed an open work space. Beforehand we invited NGOs, activists and people who represent certain kinds of content to bring contents in. There were several work stations where you could get in on the work from different levels, in ways that were either very analog, playful, or digital. For example, on the floor we had a giant map of the Vienna city center, on which you could note where power was located. We asked NGOs which places they considered important and who the targets of their messages were; then we tried to get them involved, too. Working with many others, we planned out a route. That was the high point of this project: a projection guerilla tour through the city that approached many centers of power, from the Federal Chancellery to the Presidential Chancellery, the People’s Party headquarters, the Freedom Party headquarters, the Regional Court, the Constitutional Court, the Heroes’ Gate, which we renamed the Heroines’ Gate, to banks, insurance companies, or Gazprom and McDonald’s. We superimposed appropriate texts onto these places. The content is a combination of the place and the text, since it makes a difference whether I project “zu Kurz gekommen” (a wordplay on Austrian chancellor Sebastian Kurz, literally “got a raw deal”) on the Federal Chancellery or a Billa supermarket. This high point was what we were working up to in the open work space. 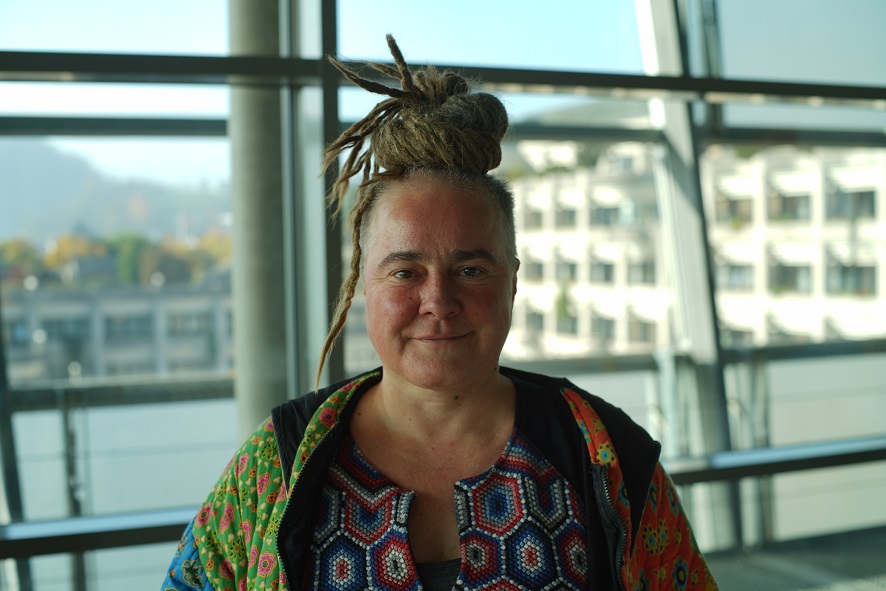 „nobody gets involved“ is a very feminist project. At the Marianne.von.Willemer Prize press conference, you said we were only in the first third of the emancipation process. What did you mean by that?

starsky: I think the process of achieving equality is far from complete. You just have to look at the official celebration of the 100th anniversary of the Austrian Republic and women’s suffrage. You see a horde of men wearing suits and ties, and a few bright spots here and there – those are the women. The images and power relationships really haven’t changed much, nor have the financial conditions. Equal pay for equal work is still a distant goal. That is of course an important issue. 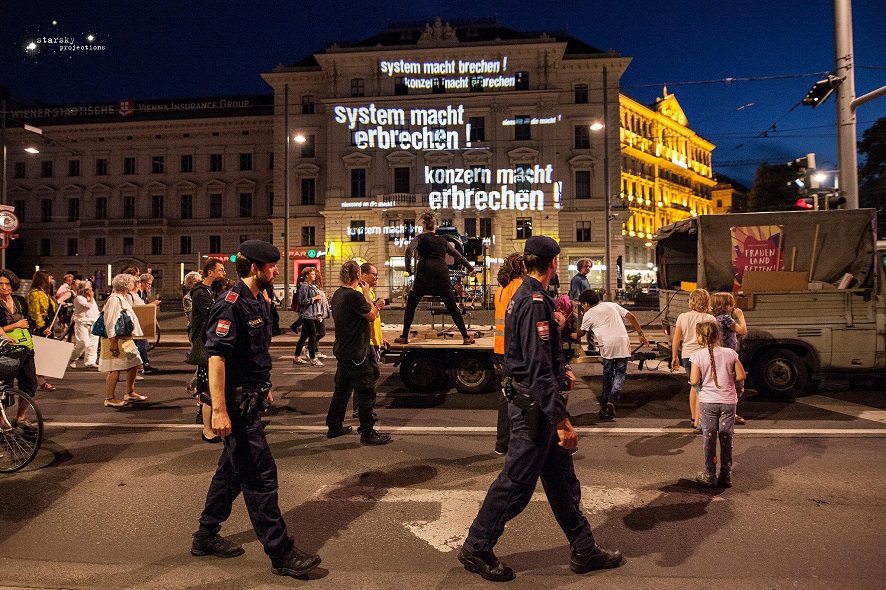 You also see your project as a “manual for self-empowerment” …

starsky: I work with the medium of projection, which is really well-suited to demonstrations, protests, things in public space, because it can help maintain principles of non-violence, of avoiding destruction and demolition. You can place huge, highly visible messages in public places and it’s untouchable because we’re not breaking anything and nothing is left behind. When I turn the projector off, everything’s gone, nothing’s left, not a trace.

As a nobody, I can talk back to the Chancellor if I use the medium of projection. That shows us that we actually have a much greater scope for action than most of us dare to recognize. There are boundaries in our heads. Who would suppose that as a nobody you can talk back to the Chancellor’s office? You just have to cross that boundary to realize it. And then it becomes effective in spirit. It seeps in. I always try to show that through my work, too. Anyone could take a projector and take a stand against the Chancellor. If everyone did it, they’d have to think. So far they haven’t really been able to turn me away or make me stop, in most cases. 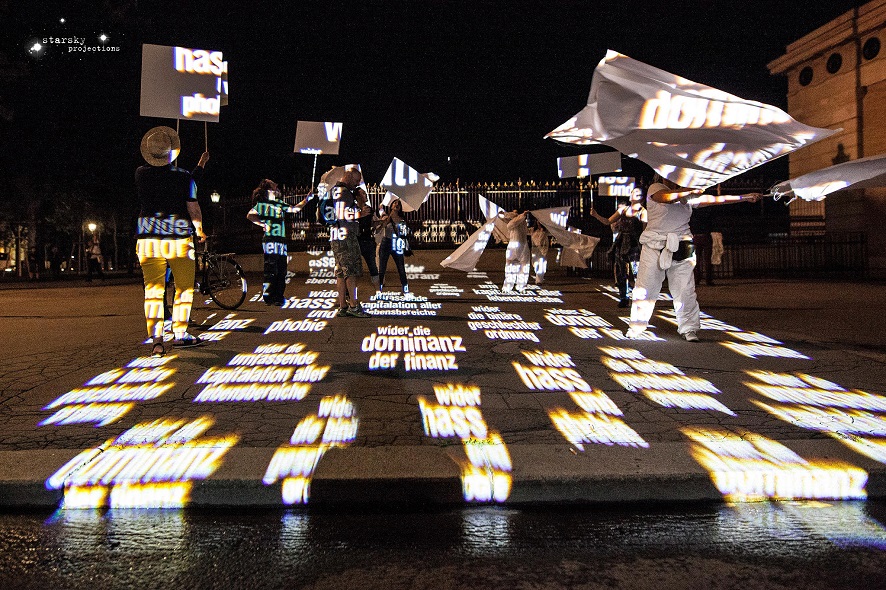 Have they noticed you then?

starsky: Definitely. But in 2000, when I did it for the first time, they hushed it up. None of the Austrian media reported on it. They sent the police, and I talked to them. They said I should stop, I said, no, it’s part of a demonstration, it’s non-violent and not destructive and there’s no way I will stop. So they left. Clever! They just pretended I wasn’t there and didn’t react. It’s only now, in 2018, so 18 years later, that it’s getting some recognition. This year there was a picture in the Standard (Austrian newspaper) for the first time. It was a protest against right-wing fraternities at the Academics’ Ball in the Hofburg; we joined with organizations such as the Mauthausen Committee, SOS Mitmensch and many others to project the Mauthausen Oath, which I translated into twenty-first-century language, onto the Heldentor. 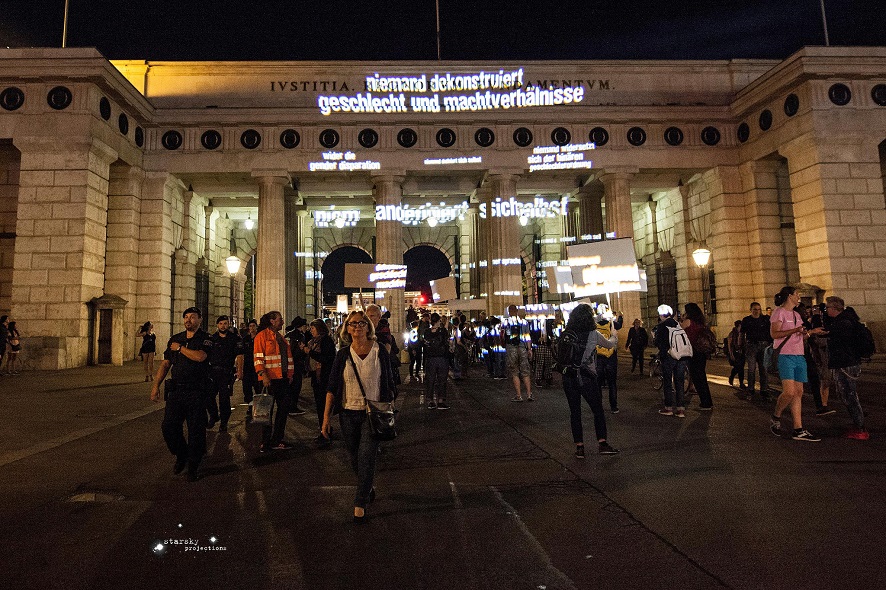 How did you arrive at this feminist involvement?

starsky: You just need to try and do anything in the art world as a female artist and technician to discover right away that the environment is one of constant devaluation of your own work. So you have to defend yourself. Although, I defended myself for the first 15 years, but I always drew attention to it. But it has zero effect on all the macho men who don’t want to hear it. It just makes me an annoying feminist who’s no fun. So in the end I only hurt myself and didn’t change anything. And of course, I always thought that every woman automatically has to be a feminist because you can’t accept being so devalued, and only after 20 years did I realize that quite a lot of women have a patriarchal mindset. Because it’s easier to support the patriarchy, because otherwise you’re just asking for trouble. You don’t get excluded everywhere, maybe you can be the token woman, but then you have to cut other women down. There can only ever be one token woman, there’s not enough space for more—only for a few select ones. You have to optimize yourself for the male gaze. If you don’t, it’s like throwing a wrench in the gears. As an artist and a woman, I consider it necessary to be a feminist. 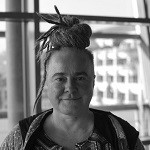 starsky is a pioneer of projection art. Her multifaceted work comprises imposing large-format projections, extensive slide installations, polymedia live performances and urban text interventions. What they all have in common is the fusion of image, language, communication and space into a  Gesamtkunstwerk that aims to create epiphanies in the observers‘ emotional memory that are as sudden as they are fleeting. starsky unapologetically blurs the boundaries between sub-, pop-, and high culture, submerging anything and everything in color, shape, words, and light: architecture, landscapes, structure and public space. starsky lives and works in Vienna.

For her project “niemand mischt sich ein,” starsky was awarded the 2018 Marianne.von.Willemer Prize for digital media. Learn more about the selection process in the interview with this year’s jurors. Complete information about the biennial prize can be found here.