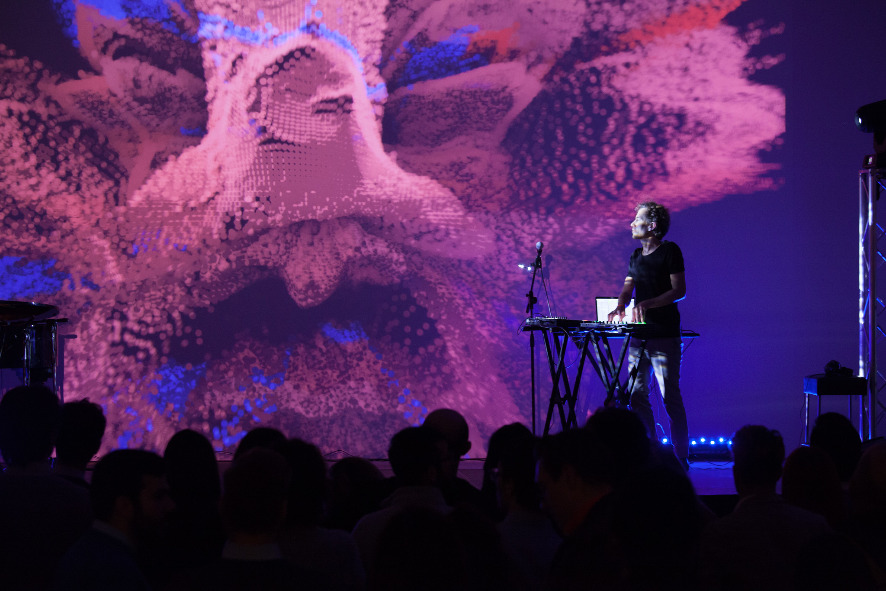 At the same time, music is inextricably linked to mathematical rules and physical principles. Its history and development is also one of the innovative technologies that brings new possibilities of expression to music makers. Artificial intelligence can also be understood as the culmination of a scientific development from mathematics to computer science, in a constant attempt to order the world.

Artificial Intelligence meets Music. With the new “AI x Music Festival“, organized by Ars Electronica and the European Commission, a platform has been created that functions as a meeting place for human creativity and technical perfection. It will take place in the Anton Bruckner Private University and the Ars Electronica Center, in the Donaupark and POSTCITY, but above all in the Augustinian Canon Monastery in St. Florian.

AI x Music is an authentic encounter and exchange with the possibilities and protagonists of this new art form.

The encounter between human creativity and technical perfection does not generally take place without friction or fear. Artificial intelligence is on the one hand a technical turbo, on the other hand a fundamental change of paradigms, how technology is used by humans. The objective of research and technical industrial development is of course to make machines so independent that they can support and assist us, i.e. relieve us of work – at best. In the worst case, however, when the thoughts are dystopian and full of fear, the machines will replace us. And it is precisely this area of tension that is interesting.

Like no other technical development, Artificial Intelligence has reached broad sections of the population. For the first time in the digital revolution, a topic has reached the regulars’ tables. People feel their responsibility, want to have a say, because it will affect everyone. Away from a purely dystopian future scenario á la Hollywood, the question arises of how the path into the future should be designed with Artificial Intelligence. If people develop these technologies, they must also develop the corresponding responsibility and sense of responsibility for us as individuals and for us as a society.

The festival comprises very different formats in order to enable as many approaches and interpretations as possible. In the field of performance, artists will stand on stage with themselves in the form of an AI and improvise. From pop to avant-garde, from vocal acrobatics to completely new soundscapes. But not only performatively, but also discursively, the audience can engage with these artists and their works. The workshops are about hands-on experience: How does artificial intelligence act in the field of music? Can it compose like a human being? How can I add a thrilling music to my computer game without having to pay a composer? How can new types of sounds be created?

The first is a classic of Ars Electronica in collaboration with its long-standing partner Bruckner Orchestra Linz, namely the “Great Concert Night”. It is an impressive encounter between classical music, i.e. analog instruments, and the digital world. In 2019, Mahler’s 10th Symphony will take centre stage, the last, the unfinished one – and this is exactly why the evening will take place under the title “Mahler Unfinished”. Again, 6 Kuka robots will be in interaction with Silke Grabinger as dancer. And, of course, there is also Artificial Intelligence, which continued to compose Mahler’s Unfinished.

Since 2003, the Great Concert Night has been a cooperation between the Bruckner Orchestra and Ars Electronica. This relationship is not a short-lived affair, but rather a true love story.

However, a much more complicated and painful relationship is behind Mahler’s 10th symphony, the soundtrack of his love sorrow. In Vienna, 1910, Gustav Mahler deals with his marriage crisis in his artistic work and seems to have disappeared his essence, his ego, as subject in the 9th Symphony, so he rears himself up one last time in the unfinished before dying the following year. It is precisely this unfinished, torso-like thing that is the starting point for spinning, thinking and dreaming.

A top-class liaison was found for this task: Together with Markus Poschner from the Bruckner Orchestra Linz, Ali Nikrang from the Futurelab of Ars Electronica is preparing an AI composition for “Mahler Unfinished”. Ali Nikrang not only studied computer science at the Johannes Kepler University in Linz, but also composition at the Mozarteum in Salzburg. He was already heavily involved in the design of the new Ars Electronica Center and is now the scientific director of the new “AI x Music” festival.

And so he talks about the development of this exciting project. The task was to work with the theme of Mahler’s 10th Symphony – and that is a very unusual one. It begins with the viola, very quietly, almost unnoticed, very darkly. Only the first ten tones were taken and made available to the AI – the work here is done with MuseNet from OpenAI, currently the most powerful model capable of composing music independently. Several pieces were composed and the exciting thing was how the AI deals with the unusual theme. Sometimes it led into a very dark direction, sounded very dissonant; then again into a quite cheerful one, which didn’t seem to fit at all. But really all versions were usable.

The Anton Bruckner Private University is an important partner for the discursive part of “AI x Music”. Volkmar Klien already dealt with this topic in the previous year. Composition over the centuries has always been a cooperation with musical instrument making – without this “tool” the musician is doomed to do nothing. And if he wants to work with the piano, he signs a contract to use 12 notes per octave. In a similar way to the digital world, the piano thus defines a space of possibilities for composers.

Harald Ehrl, Custos of the St. Florian Collections, was able to gain much from the idea of making St. Florian a place of encounter and a place of confrontation between man and machine right from the start. He, who will make his own thematic guided tours through the premises of the monastery, would like to make St. Florian an open place.

The house in its entire dimension should be open and accessible to all. For this house was not necessarily created by an Artificial Intelligence, but by an artistic intelligence that could empathize with what moves people.

Hermann Nitsch plays an organ concert on the Bruckner organ for the opening – or inauguration – of the location. If there is a kind of antithesis to the stereotypical idea of technocratic, perfect, cold artificial intelligence, then Hermann Nitsch is a great example in all his artistic nature and in his performativity to get to grips with the organ. But that’s not all, many more luminaries and creative minds contribute to the complexity of the festival. Siegfried Zielinski, media archaeologist and technology historian, together with Anthony Moore, experimental musician and co-author of various Pink Floyd songs, leads us through the pen in stages and illuminates the relationship between man and machine in different places from the crypt to the cathedral. Dennis Russell Davies and Maki Namekawa play Stravinsky’s Firebird with four hands, but also present the Austrian premiere of a commissioned work by Philip Glass.

The Karajan-Institut tries to bridge the gap between technology and humanity by transferring Herbert von Karajan’s vision into the future. He was always of the opinion that in the future music would be perceived much more visually – recordings would no longer merely be heard, but seen and felt. Therefore, a series of classical musical hackathons was started, bringing together musicians, artists, scientists and technologists for a weekend to think together about possible applications. And whether it works or not, everything will be presented after the weekend. In addition, experts from the Yamaha R&D Division AI Group and the Glenn Gould Foundation will contribute an AI-based performance.

After the intensive Saturday in St. Florian, Sunday is available to delve further – practically and theoretically – into the topic. In the evening, the “Episode at the River” pays homage to the very first sound cloud from 1979 in the Donaupark. Much quieter than the spectacular cloud of sound from the previous evening, there is time and space here to commemorate the concept of art in public space with artists whose sound works have repeatedly been represented at Ars Electronica. A cloud of sound here means that sound propagates in space – in real space and in digital space. A series of sound works will reinterpret what it means to bring classical music into open, public space.