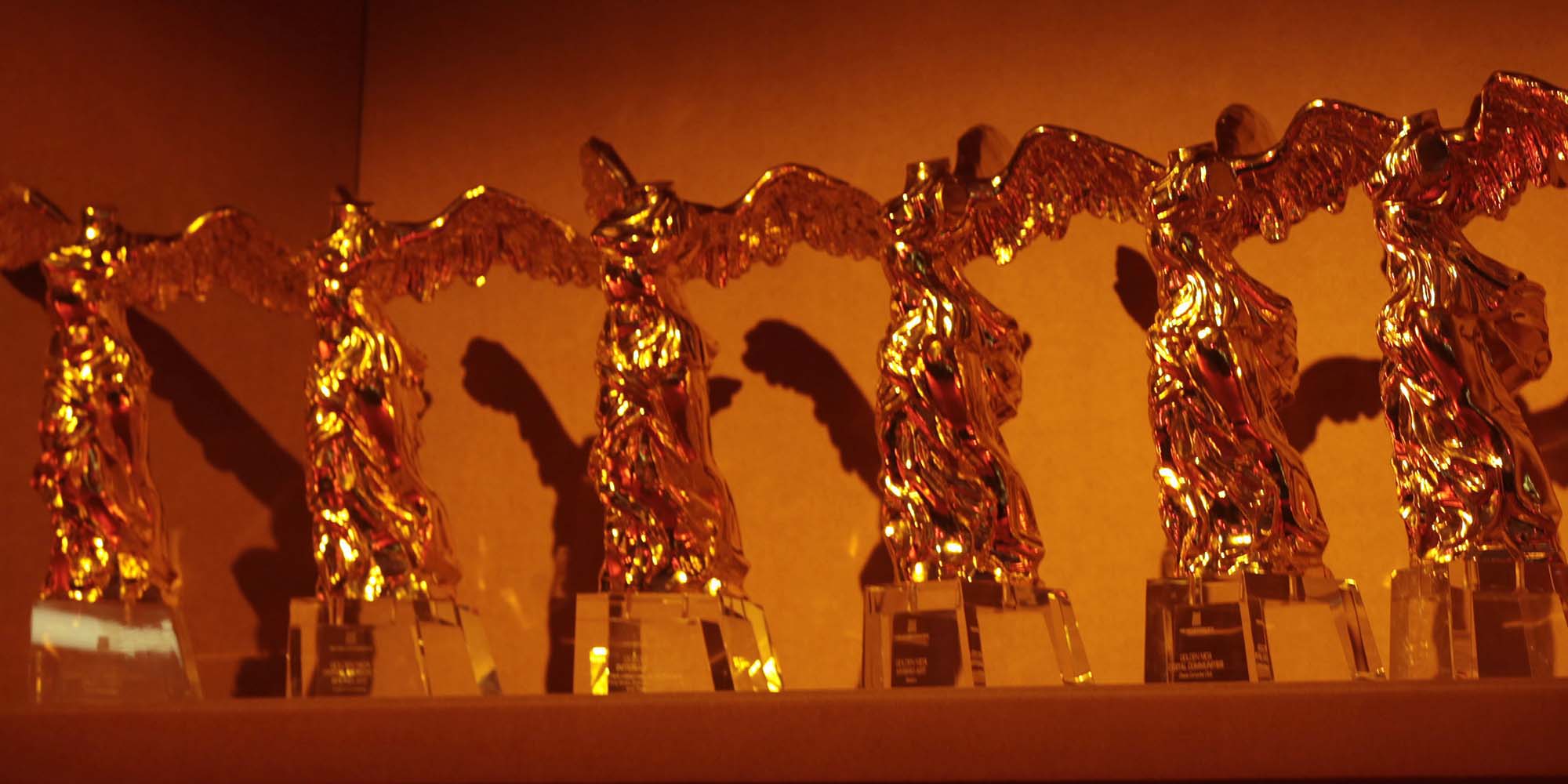 The competition has been in existence since 1987, when it was founded by Ars Electronica co-founders Hannes Leopoldseder and Christine Schöpf. The aim was to show that the computer has now become one of the most important resources in the hands of creative people and to understand computer art in the overall context of computer culture.

“When Ars Electronica was invented and brought to life at the end of the 1970s, the digital revolution was a technologically serious phenomenon, but beyond that it went largely unnoticed. Just ten years earlier, four computers at different locations in the western United States were connected to form a network for the first time ever, in the shadow of the spectacular success of the Apollo program. But in 1978, the Apple II and a few other devices became the first affordable and usable desktop computers on the market, and in 1981 the IBM group gave its new model the name PC (Personal Computer). A new, and probably the most momentous phase of the digital age begins, the personalization of computers, which are thus advancing from the data centers of mainframe computers and research laboratories into our world, into our everyday life. (…) “ The categories of the first hour were computer graphics, computer animation and computer music, for which artists from all over the world could submit entries. Since its inception, the Prix has been a radar for the latest developments in art, technology and society.

“The Prix Ars Electronica has always seen itself as a laboratory and testing ground in which the outlines of a new digital art can be identified.” In 1990 the competition was expanded to include the category of Interactive Art. The winner in this new category was the work “Videoplace”, which was not actually conceived as an interactive work of art. The aim was rather to elevate interactivity itself to an artistic medium. For this purpose, the human interface had to be redefined: The system should recognize the movements of the participants instead of processing commands from traditional input devices. Upon entering the “Videoplace” installation, the visitor encounters his own image, which is projected into a simple, graphic scenery and changes with each of his movements. In 1998, the Prix Ars Electronica was expanded to include another category aimed exclusively at children and young people. What is now called “u19 – create your world” was known in its early days as “Cybergeneration u19 – freestyle computing. The winner in the first year of its existence was the project Titanic, a black-and-white animated short film with elements of the classic silent film, submitted by the group “The Anonymous Titanics”. In 2004, the categories Digital Communities and [the next idea] voestalpine Art and Technology Grant were announced for the first time, followed in 2007 by Hybrid Art. In 2014, the Prix Ars Electronica came up with the next innovation: For the first time, a Golden Nica was awarded to the Visionary Pioneers of Media Art. It’s not possible to submit entries for this category. Instead, nominations are made on the basis of the jury’s suggestion for Visionary Pioneers of Media Art whose artistic work not only anticipated the changes caused by digitization but also played a decisive role in shaping it and laid the foundation stones for the media art of our time. Apart from those already mentioned, which well-known personalities were actually among the winners of these years? For example, John Lasseter for “Luxo Jr.” and the musician Peter Gabriel for “his creative use of new technologies” were among the first winners to receive a Golden Nica.

Furthermore, Tim Berners-Lee won a Golden Nica in 1989 for the Hypertext Transfer Protocol (HTTP), or Jeffrey Shaw for “The Legible City”. The Australian political activist, investigative journalist and former computer hacker Julian Paul Assange, who eventually became known as the programmer and spokesman for the WikiLeaks disclosure platform, which aims to make secret documents generally available, was also a guest in Linz in 2009 at an invitation from Ars Electronica. He was awarded an Award of Distinction in the Digital Communities category for the Wikileaks project. Julian Assange at the Prix Forum in Linz 2009, Credit: rubra

Other names from the annual, very broad field of participants, to name a few, are Internationally renowned artists such as Karlheinz Stockhausen, Roy Ascott, Lynn Hershman, Toshio Iwai and Ryuichi Sakamoto, Chris Cunningham and Aphex Twin, Oscar winners such as Chris Landreth, and young creative pioneers such as the Graffiti Research Lab. The object of desire of all potential award winners is obvious: the Golden Nica! The statuette, which is modelled on the winged goddess Nike of Samothrace, has a special history with Linz: before the birth of Ars Electronica, the Forum Metall, an exhibition of large-scale metal sculptures, was held in Linz in 1977. Christine Schöpf narrates 1996:

“The symbol and advertising figure of the Forum Metall was a sculpture by the artists’ group Haus-Rucker-Co, placed high above the main square, an eight-meter-high copy of the Greek goddess of victory Nike of Samothrace, which can be seen in the Louvre. (…) The Haus-Rucker-Nike triggered fierce protests throughout the people of Linz. By order of the city, the sculpture was secretly removed.

About eight years later Leopoldseder and Schöpf decided that it was time for a return of the “Nica”, as the prize figure was called in reference to the last letters of the “Ars Electronica”. It should and would become the “victory goddess of the electronic arts”. How does a Prix submission actually work? The Open Call starts every year already in January. As mentioned above, the categories and the number of categories have changed a lot over the years. The Prix reflects changes in art, technology and society. The current interim result of this continuous development is the category Artificial Intelligence and Life Art category, which was just initiated in 2019. A highlight of the annual Prix Ars Electronica calendar is the arrival and meeting of the top-class Prix jury of experts. It is composed of artists, curators, scientists, managers and journalists from around the world. Each jury meeting begins with the Welcome Dinner, which is an informal opportunity for all of the people involved to get to know each other. The jury meeting itself then takes three full days, as there are dozens of submissions to analyze and discuss and finally agree on the winners. Once the decision has been made, the winners will be presented to the general public at a press conference in the presence of representatives of local, national and international media. The jury’s statements will be explained and the prize-winning projects will be described in detail. The next highlight of the Prix Ars Electronica year is the Ars Electronica Festival, which is held annually in September in Linz. During the gala, the Golden Nicas, distinctions and acknowledgements are ceremonially awarded. The Ars Electronica Festival , which set a record in 2019 with more than 110,000 visitors, is largely fed by Prix submissions. Without a doubt, the most important Prix Ars Electronica showcase is the major CyberArts exhibition at the OK. In addition, many other projects submitted to the Prix Ars Electronica will be shown in various festival programs: artworks and projects in the Digital Musics and Sound Art categories, for example, will be represented in the form of concerts at and around the festival. Among the most important of these are the Opening Event, the Grand Concert Night and the OK Night. Another festival stage for Prix Ars Electronica winners is provided by the Prix Forums, like the CyberArts Show, which is also held at the OK. Here, the artists talk about their work, their perspectives and concerns, and the audience can ask questions. The Expanded Animation Symposium, which is part of the Animation Festival, also serves as an exchange platform for animators worldwide. The program that honors award-winning submissions to the Prix Ars Electronica in the Animation category is called Electronic Theatre. The Prix Ars Electronica’s award-winning projects in the u19 – create your world category will also be given their own exhibition at the festival. What’s special about this is that the entire section is created in collaboration with the prizewinners. In addition, there will be a special u19 Ceremony with its own distinguished guests at which the prizes and awards will be presented. The u19 category of the Prix Ars Electronica is divided into two subcategories: Young Creatives, for entrants up to the age of 14, and Young Professionals, for entrants between 14 and 19. After the Ars Electronica Festival, the winners and their projects are still in demand: The Ars Electronica Center is the first presentation opportunity for artists: If the project fits thematically into the exhibitions, it will be considered for the Center and presented there either in the permanent exhibition or in Deep Space 8K. Two examples of highly successful Ars Electronica export formats in recent years are the School of the Future Festival, which will be held for the second time in 2020 in cooperation with Tokyo Midtown in Tokyo, Japan. The event is an out-of-school venue with inspiring impulses from media art that are intended not only to entertain but also to stimulate reflection on the future of our society. „Just because something doesn’t do what you planned it to do doesn’t mean it’s useless.“ Even when the festival is over, the exhibitions in the Center are history and the Golden Nica that was won is already gathering dust: As a Prix Ars Electronica artist, you will certainly not be forgotten. Last but not least, every submission to the Prix Ars Electronica becomes part of the Ars Electronica Archive, a collection and documentation of media art and its development that is unique in the world. Finally, a few facts and figures about the Prix Ars Electronica: