All the best, Hannes! 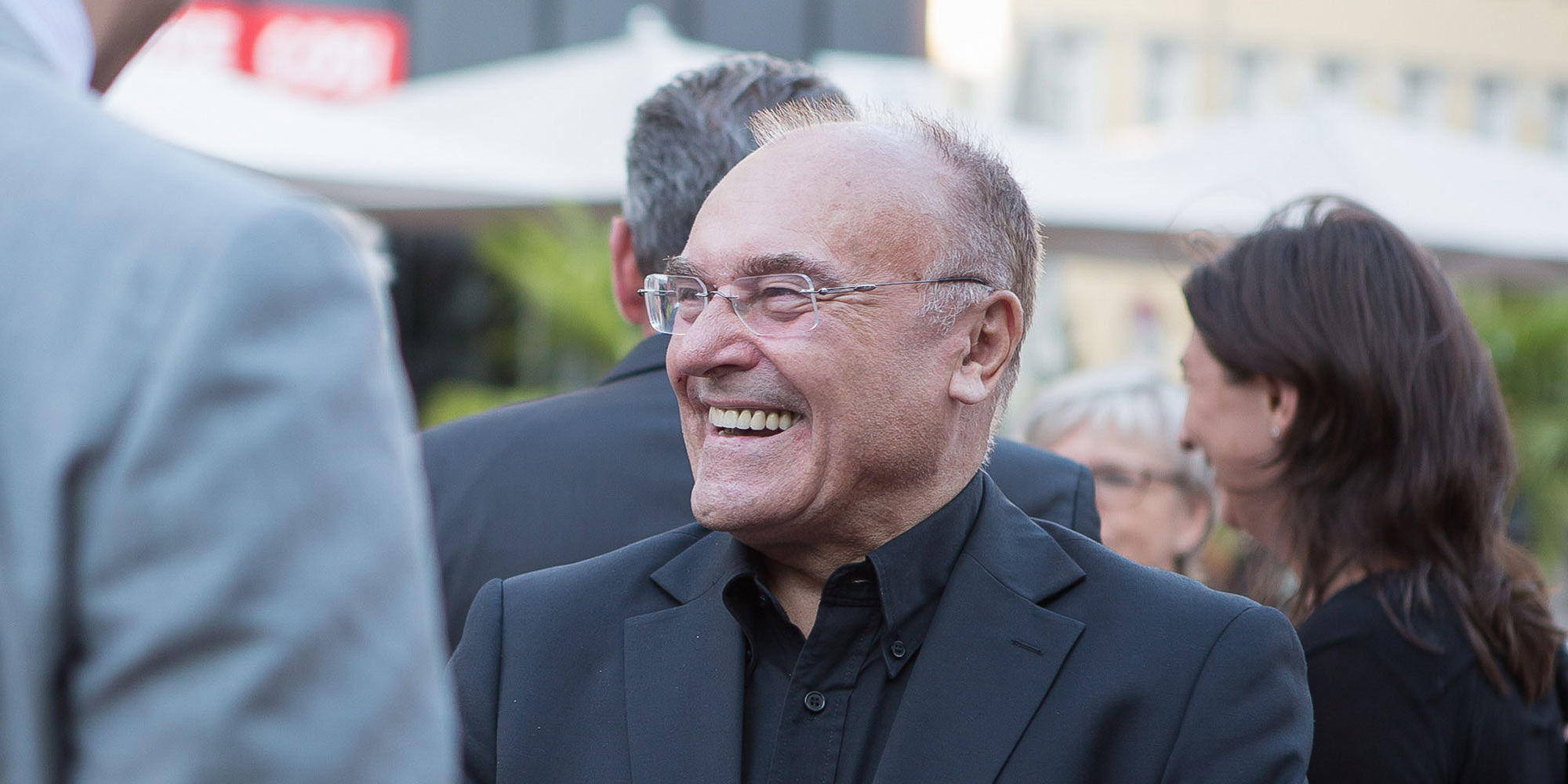 Supplemented with photos from this period, a short journey through time of the digital revolution is the result of these past four decades. What can also be seen in these excerpts, however, are the ideas of Hannes Leopoldseder, who is behind Ars Electronica, behind the connection between art, technology and society, and which are as true today as they were then.

1979: Looking ahead with the means of art

„The purpose of Ars Electronica is not to take stock of the past; it is oriented instead to the developments of tomorrow. Thus this event for electronic arts and new experience assumes a character of incalculability, of risk, and of daring to try something new. At the same time, however, Ars Electronica poses a challenge to artists, technicians, cultural critics, and ultimately to the public encountering new forms of expression in art.“

1982: On the way through the third industrial revolution

„As industrial society has revolved around the machine, the age of the microprocessor—the third industrial revolution—will be determined by information and communication. Information society, with the developments of broadband cable systems, home electronics, and direct radio satellites, will produce new modes of cultural behavior and—due to the change of technologies and media—also new forms and contents of artistic creativity. For this future Ars Electronica wants to provide markers.“

„Innovations and changes have one thing in common, a new raw material: not gold, not steel, not petrol, but information and knowledge. Information is the currency of the new age. As the industrial society, starting from Ford’s Model T, made the automobile a mass product, so our decennium uses the production of information as the propelling force of its economy. The children born in the Orwell year of 1984 will be 35 years old in 2019. They are the generation that will be responsible for our society then. Does 1984 mark the beginning of a revolution of our society—and will it be completed by 2019? Today’s new basic innovations will rank among the old technologies by then; their infrastructure will determine our economy, our society, art, and culture. The electronics society will be in full bloom. Working out the tracks—this is today’s challenge.“

„The computer is enlarging the capacities of our brains, thinking and intelligence. The multiplication of physical power is not the goal, but rather the processing of knowledge. The scientists in Artificial Intelligence research programmes already talk about a change from processing mere data to a future intelligent processing of knowledge. Thus this computer-evolution will probably become the Logos of a new step in cultural evolution: Computer Culture. (…) The requirements of a Computer Culture go far beyond what is usually understood as the “fourth cultural technique”: computer competence, i.e. the competence of using the computer, of being acquainted with the new alphabet. According to debatable Japanese ideas, computer capacity should be available to everyone in the future, like air. The use of a computer will then be as natural as the use of a telephone, a car or electric light today. The fourth cultural technique, the introduction of which is in great demand in today’s educational system, (and which includes mainly the techniques of handling the computer), is therefore but a transitory technique. Computer Culture induces radical changes in the history of culture: all the cultural techniques hitherto used—reading, writing, calculating —may be taken over as such by the computer. Computer Culture asks for a new evaluation of human capacities, asks for a change in thinking, enables a new start.“

1987: The Prix Ars Electronica as a trend barometer

„All over the world thousands of artists have been employing this technology for decades. Some of them have gathered at the Prix Ars Electronica ’87. What they have in common is that they work with computers in their respective fields of art—in graphics, in animation, in music. The results of the Prix Ars Electronica ’87 contest should help to read the trends in these secrets of the arts. The encounter of artists and technology, the appropriate use of the new possibilities, and are of considerable importance: the use of technologies by the artists on the one hand shows the chances for the future, on the other hand, “dead ends“ are revealed as well.“

„What is the characteristic feature that has been inherent to Ars Electronica from the beginning, that imbued the festival with the dynamic to take off from Linz to become the international trademark of a specific festival? In a word: openness. It is the continuous dedication to openness, striving to break down the boundaries and overcome the barriers between individual genres of art, not separating so-called popular and serious art but rather merging them. Openness has become a fundamental characteristic of the festival: open to new trends, open to the interactions between art and technology, open to that which is yet unfinished, open to contradictions, open to new territories, but especially open to the encounters between artists, scientists, and those who are involved in discussing our future.“

1995: Farewell to the analogue age

„Not only are we at the end of a century, we are also about to leave the analog age. There is a digital world before us. (…) If the atom was the trademark of the science of the twentieth century, the dynamic Net will become the symbol for the twenty-first century. The dynamic Net is an icon of a global mind, a global consciousness in the sense intended by Teilhard de Chardin, the mystic of the era of information. The Net is to be understood as a new form of human communication, as a new global medium currently growing faster than television, radio, or the printed media ever did.“

1996: The Ars Electronica Center as a place for digital media culture

„Napster and Gnutella are not quite the hottest topic of the year 2000 in Europe, but rather there is another term that seems to be the buzz word of the year 2000: mobile computing. Following e-business, e-commerce, e-life, the new magic letter is “m”—mobile. With mobile computing, e-commerce is succeeded by “m-commerce.“ Does this shift indicate a single fork, or does it indicate a new direction? Evidence may be found to support both views. In any case, one thing is certain: the Internet is reaching a rapidly growing number of customers with astonishing speed via cell phones. For this reason, the year 2000 marks a turn to mobility, but also a step toward the individual’s independence from time and space.“

2006: The Millennials are coming

„For the first time a generation of young adults knows it can communicate to others what it thinks, what it does, what it feels—and, ultimately, how it wants to shape the world. It is a generation that can make itself heard—a generation “at the digital edge”. This generation has a number of names: Millennials, Generation Y, but also Echo Boomers—a generation born in the early 1980s and which is now, in 2006, in its mid-twenties and so beginning to take on greater responsibility in many areas. This generation has grown up with digital media. And over the next decade, these Millennials will increasingly fashion the media to fit their ideas and so achieve the digitization of day-today life.“

2008: A constant flow of knowledge

„Never before in history has the flow of information or knowledge been accessible to so many people as it is today. And this is true even if there are still strong barriers in many areas. For the first time, an open knowledge society is not only conceivable as a utopia, but also visible in its outlines, opportunities and consequences on the horizon. The constant flow of information is producing a historic change. And what applies to software is all the more true for humans: it’s time for an upgrade. Quietly, another technological development has also begun invading our daily lives. It is turning up everywhere: robots as machines that perform tasks with great precision and autonomy, like new deep-sea diver robots that can go down to 6000 meters, or silent controllers of production processes, and humanoid robots. And this is the case even if humanoid robots are at present used primarily for marketing purposes.“

2010: Our connected world is vulnerable

„The members of the [Prix Ars Electronica] jury will certainly not forget this year’s sessions: the days they are in Linz coincide exactly with those of the eruption of the Eyjafjallajökull volcano in Iceland. For the first time, Europe and other parts of the world are cut off from air traffic. When one airport after another begins to cancel arrivals and departures on Friday, April 16, many jury members start wondering about their flight routes home. (…) Following the swine flu, the financial crisis and the threat of national bankruptcies, the eruption of the volcano in Iceland revealed just how vulnerable our world, racing from one new technology to the next, has become. Our networked world opens up a whole spectrum of opportunities that also involves risks. The cancellation of so many flights demonstrated the vulnerability of our globally networked world. Nearly everyone was affected in their own “little world”, whether it was because medical and food deliveries, donations of vital organs or relief for earthquake victims did not arrive.“

„Over the coming decades, robots, machines and computer programs will gradually take over the jobs that human beings currently perform. Some predictions maintain that they’ll do up to 70% of the work. Will an unconditional basic income be a prerequisite for this future? What’s left for people to do? Make full use of our human capabilities; give expression to our humanity, that which sets us apart from machines; give free rein to our human creativity; dedicate ourselves to artistic and cultural pursuits! When our workload diminishes, there’s more time for us to enjoy life. A plea in opposition to the discontented spirit of the times can only be an impulse. We have to believe in the future. And we have to regard the times in which we live as extraordinary, as is the place in which we live. Time and location are unique.“

„But Ars Electronica is also deliberately going beyond the technical development of robots, artificial intelligence, and neuronal networks to shed light on the human-machine relationship. What do humans have to do to still be humane? Who are the change agents in the broader sense? In this context, one thing is for sure—the pace of change has rarely been as fast as it is now. We live at an epochal time, we are experiencing a decisive turning point in human history in that this is the first time that we are called upon to define ourselves not in contradistinction to other human Verbeings but rather with respect to the “other I.” The unique essence of a human being is being called into question, for the first time in radical proportions, since artificial intelligence, algorithms, and deep learning are more than just Buzzwords of the Year—they are changing our existence in the world. We are being elbowed out of the spotlight. The fight for center stage has begun.“ 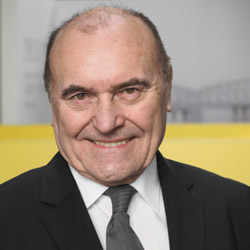 Hannes Leopoldseder PhD., was born in 1940 in St. Leonhard near Freistadt. He has worked as a television journalist for ORF Vienna (from 1967), as the managing director of ORF Upper Austria (1974 – 1998), and as the information director of ORF Vienna (1998 – 2002). In 2007 he received the Austrian Cross of Honour for Science and Art, First Class, and in 2013 the Grand Decoration of Honour for Services to the Republic of Austria. In 2009 he was appointed Honorary Professor at the University of Art and Design Linz. He co-founded Ars Electronica and the Linzer Klangwolke in 1979 and initiated the Prix Ars Electronica (1987) and the Ars Electronica Center (1996). He is also the co-editor of Ars Electronica’s catalogues.