Strolling Between the Disciplines 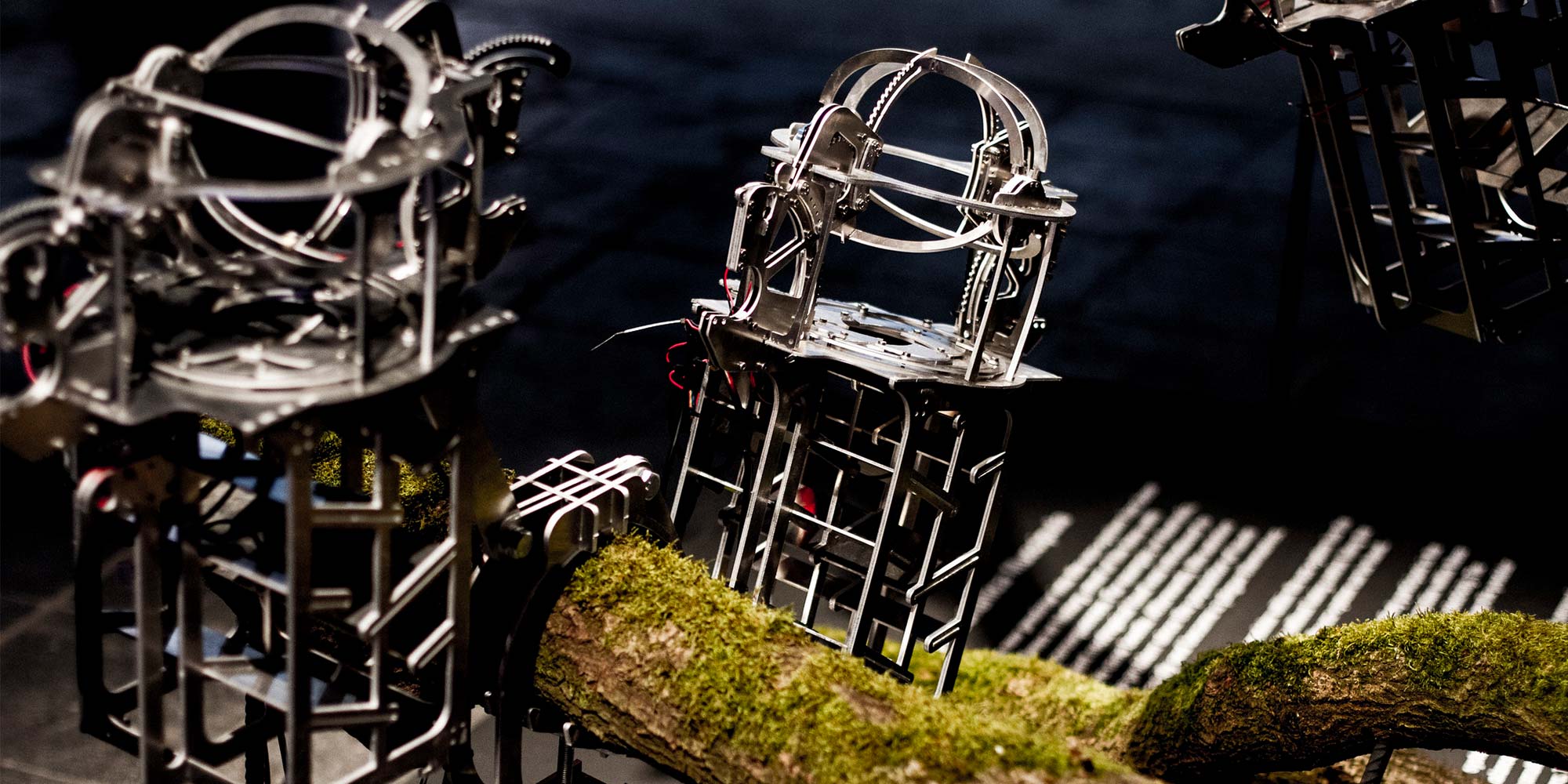 The JKU Campus is not only a place of education and research, but also a place of encounter – encounters between students, between people, disciplines and projects. The symbol of JKU’s interdisciplinary approach, however, is not only the campus itself, but above all the LIT, the Linz Institute of Technology and a call for proposals issued by Ars Electronica and JKU.

The main focus of this call is the funding of projects/objects/artefacts that serve to present JKU and its research in the context of the Ars Electronica Festival 2020. Thus, the focus is not on conducting new research, but rather on the interesting and interactive, playful or discursive, and in any case public-ready presentation of research areas, projects and results, developments and prototypes. The aim is to make science experienceable in an exciting and unusual way. Christl Baur, Head of Festival, Ars Electronica, on the process of project development:

“Ars Electronica was allowed to accompany the development of the projects. Projects in which it was perhaps not yet common practice to collaborate across disciplines. The development process was an approach with diverse, fantastic results.” – Christl Baur

Christopher Lindinger, former Co-Director as well as founding member of the Ars Electronica Futurelab and now Vice-Rector for Innovation and Research at JKU, explains how the collaboration came about:

“We at JKU see ourselves as a technological university with a broad concept of technology. This means that we also consider the impact of technology on society and have established very broad faculties. We believe that this width is only possible by building a transdisciplinary bridge. This is why we have launched a call for proposals that is intended to promote projects at the intersection of art and science on the one hand, and on the other hand to move towards a very broad understanding of technology. The result is 12 projects that we will exhibit at the Ars Electronica Festival under the title JKU LIT @ Ars Electronica.” – Christopher Lindinger

We have taken a closer look at three of these exciting, interdisciplinary projects for you in advance.

Pangolin is derived from the Malay word “Peng-guling” and describes the pangolin. The project “Pangolin Scales” was inspired by this unique animal, which can control its scales according to its emotions, curl up in case of danger or set up its scales for defense. The garment, realized by a cooperation of the researchers inside the Institute for Integrated Circuits of the JKU, the brain-computer-interface-expert inside g.tec medical engineering GmbH and the high-tech fashion designer Anouk Wipprecht, responds to reactions of the brain. Here the team has succeeded in creating a true innovation: Developed the world-wide most highly soluble brain computer interface (BCI) on the market, which is able with 1.024 channels to extract information from the human brain with a resolution never been there before. One example: Whereas it was previously possible to use the device to control movements of the hand, individual fingers can now be differentiated, sentences recognized and lip movements interpreted. 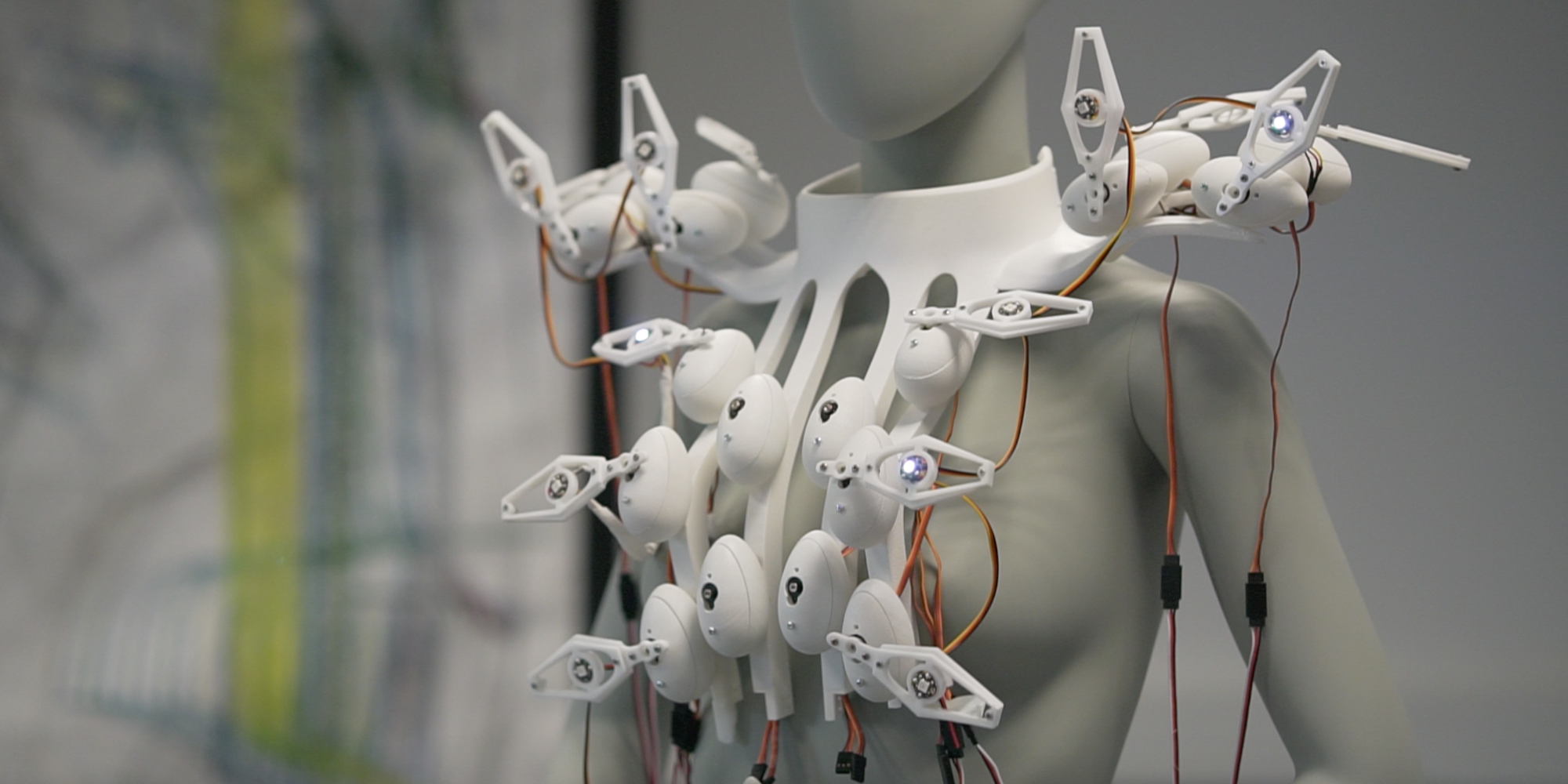 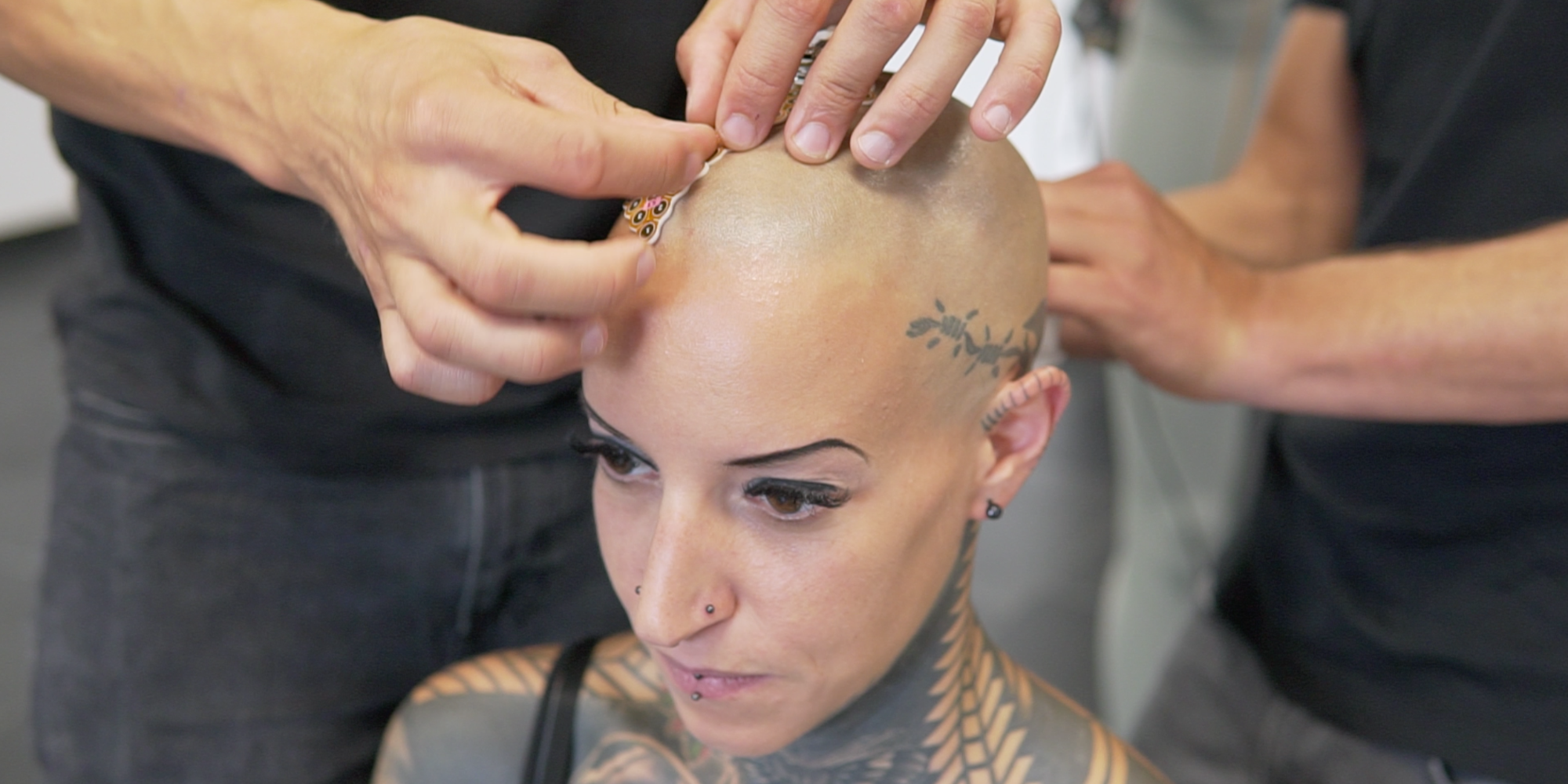 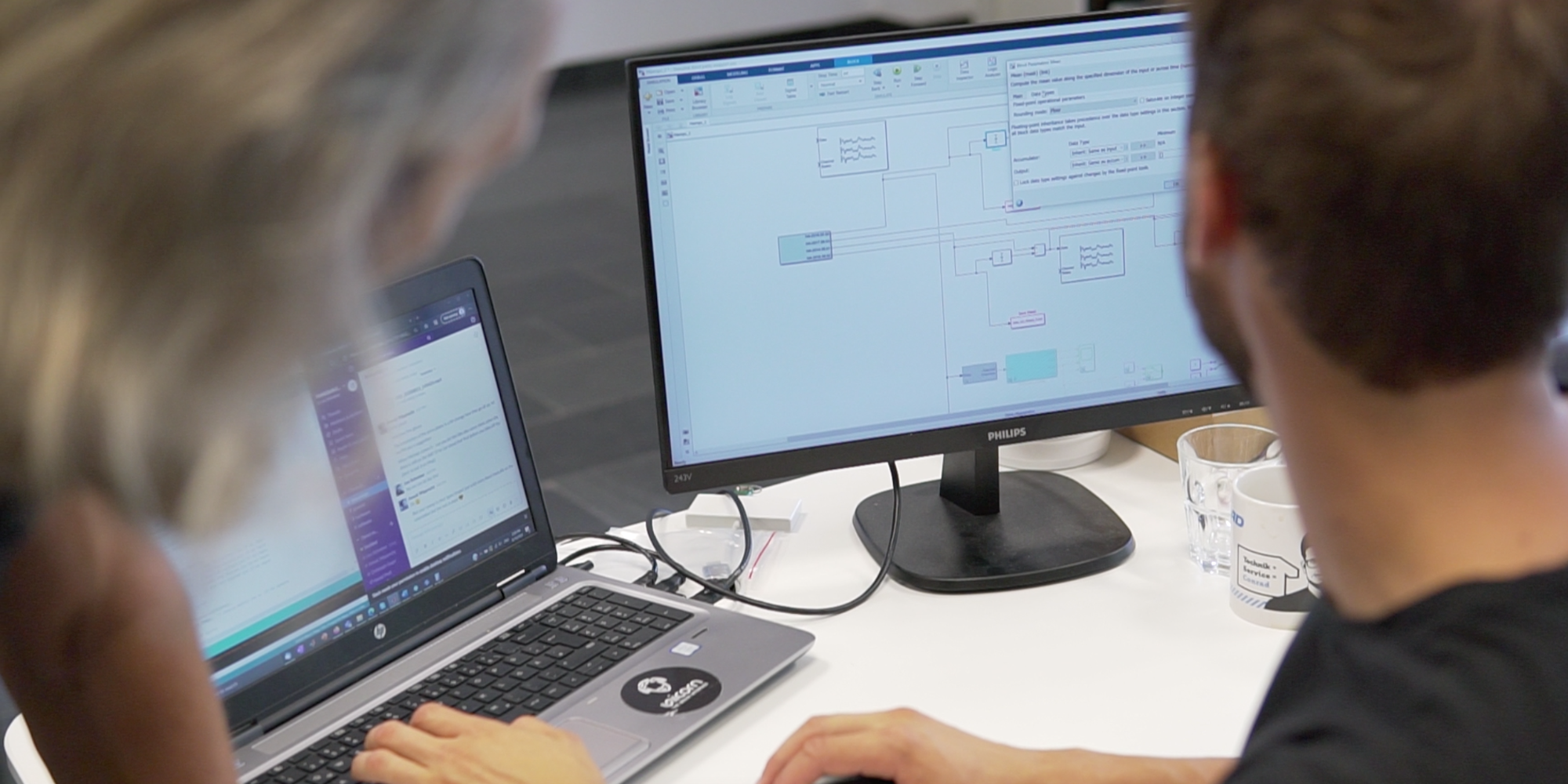 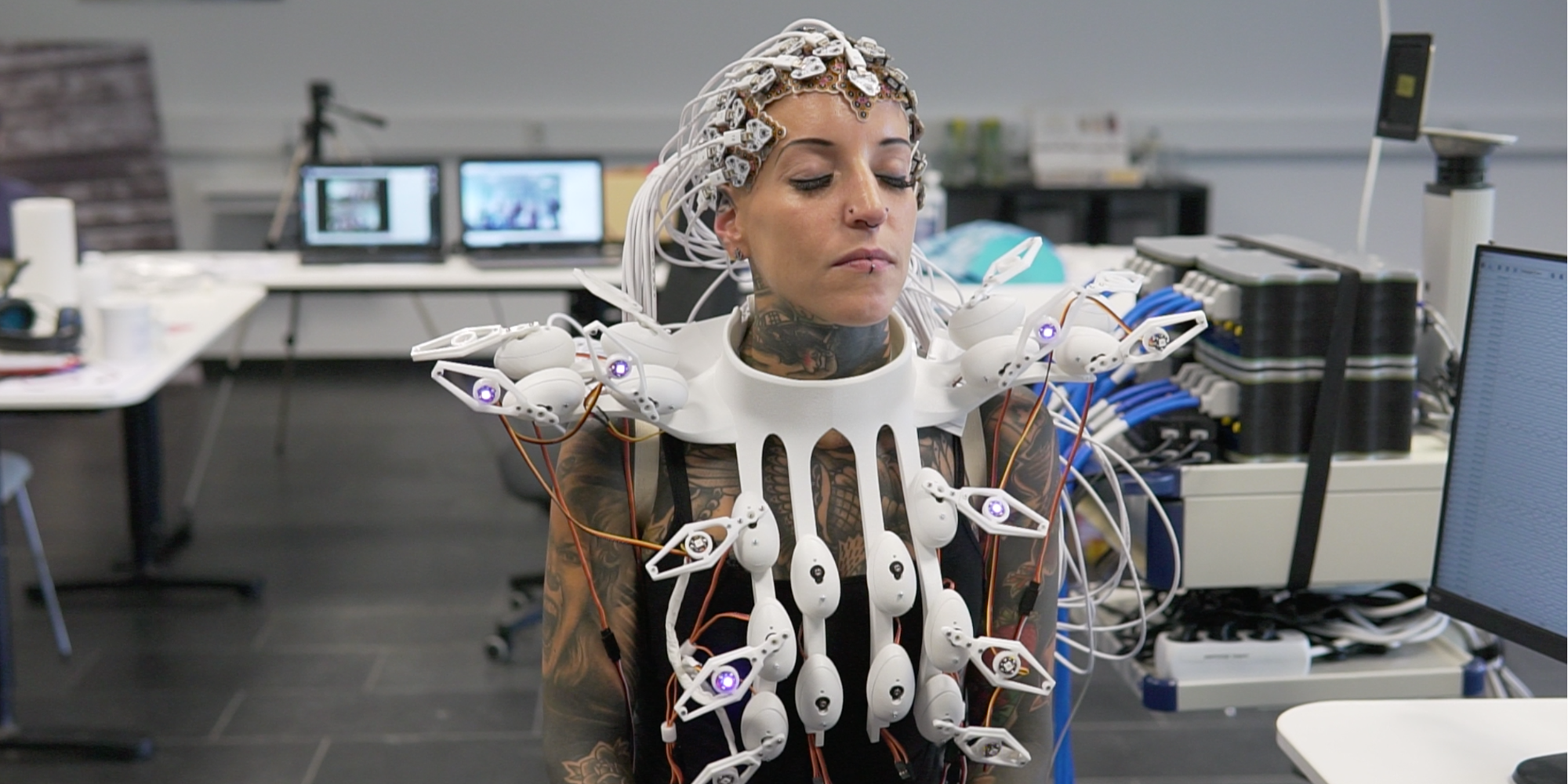 The 1,024-channel BCI is also used as an input device for the BR41N.IO Designers’ Hackathon during the Ars Electronica Festival. This year for the first time, this event, which has already become a fixture on the program, will take place virtually. There will be several predefined tasks for which creative solutions can be developed as a team.

Exposed Building is a project that deals with the vulnerability of smart homes by trying to find the holes in systems. One of these exposed vulnerabilities was in the Science Park’s electronic door locks. The scientists took advantage of this “bug” together with sound artists and created a composition that uses the locking mechanisms as instruments. In addition, there will be a visualization to show which locks are currently in use. Furthermore, the “instrument” itself can be walked on and thus experienced from a variety of angles. The installation playfully provokes reflection on the vulnerability of modern technology and its growing risks for society.

Magic Darts is a dartboard where you always hit the bull’s eye. The mechatronic system of this machine ensures that you cannot miss your target. As soon as the dart is fired, the highly advanced microwave sensor network reacts, the electronics with its algorithms calculate the flight path and the dartboard adjusts its position to the target of the dart. Score! Such technologies will influence our future daily life: in autonomous cars, where microwave radars enable us to see in the dark, in fog or dust, when algorithms have to estimate the movement of potential obstacles, or in exoskeletons, where hydraulic actuators allow ultimate compactness, low weight and energy consumption far beyond the limits of current technologies. The topic is therefore by no means just a “game”, but complex, cutting edge issues.

A second part of the exhibition, which will be on display on the JKU campus in Kepler’s Garden, consists of selected works that can be discovered while strolling through the park. They deal with the overall theme of the festival in a playful way. At the same time, Christl Baur, Head of Festival, emphasizes that there will be no classic Theme Exhibition as in the years of POSTCITY.

“The essential point in the interrelation of the projects is the strolling across the campus. There is no thematic curation, but the experience on campus consists in meandering over this fantastic, partly newly developed place. Here one can experience and learn about different aspects of the festival’s central topics; everything one sees here is always to be seen in the overall context.” – Christl Baur

What you can see and experience in every corner and even in the trees in Kepler’s Garden in the so-called Garden Exhibition are, for example, these three projects, along with several others:

Who has never experienced this: as a teenager you sit in the grass, picking daisies and plucking the petals one by one, with the question in your head: Does he/she love me, or does he/she love me not? lovesmenot takes us back to our teenage years, not without pointing out the value of human action. Technology, the artist is convinced, often makes us forget the human work, the craftsmanship. With poetry and emotion, this project makes us reflect on automation by mechanizing a deeply human action.

Pluvial leads us into a unique sound space. The artist creates an auditory body, a partially self-organized instrument that allows us to experience the phenomenon of rain. The density and intensity of the audible drops is based on the average rainfall on the oceans. Pluvial is part of the AIxMusic Festival, which Ars Electronica is organizing this year for the second time as part of the STARTS initiative in cooperation with the European Commission.

Is it possible to use robots to find a new balance in our ecosystem? In this project, the artist poses the recurring question of the relationship between man and nature. He intervenes in this relationship with the help of individual robot prototypes that can selectively restore the balance of a manipulated ecosystem. The starting point of the considerations is that plants in monocultures are affected by parasites. Van Leeuwenstein creates a robot that is attached to a tree, in this case the oak, and attracts the so-called oak processionary moth. This parasite, which destroys the trees, is attracted by light and the robot picks it up with its “mouth”. The insect is then symbolically digested and in turn generates energy for the robot. The cycle closes. The project is hidden in a tree on the campus and only attentive observers encounter this and similar objects while strolling.

From September 11 to 13, Kepler’s Garden on the JKU campus will become a playground for new collaborations, interlocking disciplines and creative technologies. Meditative meandering, even off the beaten track, is the only way for attentive visitors to discover the relationship between humans, nature and technology. The entire program can be discovered here.