Artistic Ideas for the Ecological Development 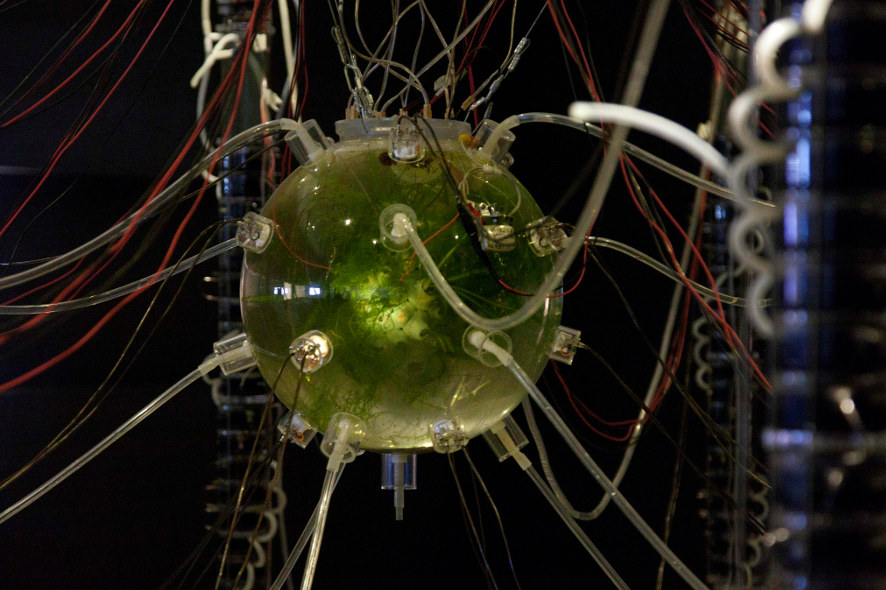 For the installation “Plantas Autofotosintéticas” Gilberto Esparza won the Golden Nica in the Hybrid Art category at the Prix Ars Electronica 2015. This is a complex symbiotic system, which consists of spherical Plexiglas tanks arranged in a circle and interconnected by tubes. The tanks contain colonies of bacteria that, through their metabolism, filter polluted water and significantly improve its quality and also produce energy in the form of electricity. Both outputs are then utilized by Gilberto Esparza to keep a lifecycle running. A specially developed hydraulic system delivers the recycled water to the central container and thus provides an optimal environment for its inhabitants: protozoa, crustaceans, microscopic algae and aquatic plants. At certain intervals, the electricity is given off as light, which the plants use for photosynthesis. The organic waste products generated by the organisms in the central container are, in turn, pumped into the tanks where they’re decomposed by the bacteria.

In the interview, Gilberto Esparza talks about his artistic work, the need to modify our use of water and the possible risk of water wars, if we won’t change our behavior.

Gilberto, your artwork is mainly about the impact of increased technological advancement on our everyday activities and its effect on our relationships, our environment and the structures and processes that constitute our urban habitat. In regards to this, how do you imagine our world 50 years from now?

Gilberto Esparza: I believe there will be many changes in the way that we relate to our environment, a symbiotic relationship will develop where cities will mimic the landscape and people will coexist with native plants and species, and will be structured like cellular tissue, in which every cell produces their own energy and food, and frequent feedback will be sent to computer networks, creating flows of information, flows of people, seeds, materials, etc…

Water will be made reusable through biological processes such as recirculation through rivers to be enriched with minerals and reuse it, and the remainder of it will be used as nutrients for those symbiotic cities soil.

In your work, you often focus on hybrid processes involving machinery and biological organisms. What is it that excites you about the combination of both?

Gilberto Esparza: In developing such projects, I am able to better understand how complex systems evolve through the process of energy exchange in nature that generates and sustains all life. Such experiments also generate the need to interact with specialists from different areas that are exploring new lines of inquiry and research for the development of devices and fostering of new knowledge, all with the goal of creating a more sustainable planet. 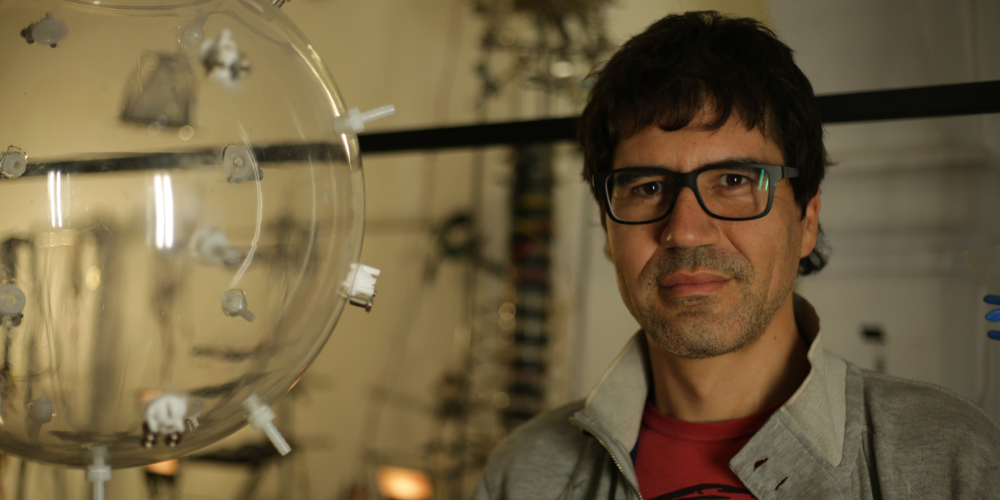 What is your training? Do you feel more like an artist, an engineer, or a biologist?

Gilberto Esparza: My background is as an artist, but I am very interested in science, technology, and social processes. I find that the best way to share my knowledge and experiences with the world is through art.

Is it possible to use the filtered water and the electricity of the installation “Plantas Autofotosintéticas“ for human use?

Gilberto Esparza: The installation Plantas Autofotosintèticas filters water at the same time that produce electricity. This could solve many energy and water issues in third world countries. With this system, the water is improved through filtration and the process of biodegradation, and can then be used for irrigation. Water for human consumption requires further purification processes. This filtration process is not only applicable to developing countries, but can be implemented in any city in the world that is facing the issue of overexploitation of aquifers. 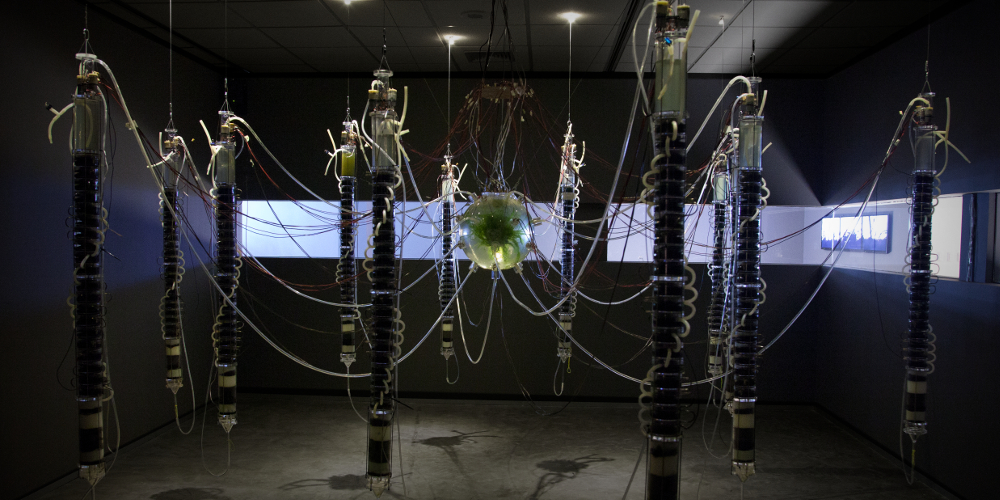 There are forecasts that predict that the world population will increase by 2040 from currently around seven billion people to almost nine billion. So the problem of water scarcity is becoming a more pressing issue. Do you believe that your system can be made scalable enough to avoid this problem?

Gilberto Esparza: Besides this, there are many systems, which together can recycle almost 100% of water. One example is the system that the International Space Station uses. There are now many possibilities to recycle water and to harvest rainwater. The only thing that we need to do is to rethink our relationship with water. Until now, we have stuck to the outdated system of extraction, consumption and disposal.

When you consider the increase in population and the glacial melting and desertification, because of the climate change, do you believe there may be a war over water in the future, like some people predict?

Gilberto Esparza: If the system continues like it has been until now, contaminating our rivers to the point that they are no longer an accessible resource and the continuance of water privatization by bottling companies, there will surely be a war… not between nations, but between the government and industries that are harming its citizens. This is something that is actually happening right now.

Do you already have something in mind for your next project?

Gilberto Esparza: I am now developing a project that will explore the most polluted rivers in Mexico in order to study water quality and interview affected communities, scientists, and activists, as well as the creation of a sound instrument that can be used to measure the bacteria levels in rivers and translate that information into different sounds that vary according to the type of contaminants present in the water. The final product will be a disc with the information and sound bits gathered during my investigation as well as a web page for researchers and the general public who are interested in learning more about the current status of our rivers.

Gilberto Esparza (MX), born in 1975, is a Mexican artist whose work involves electronic and robotic means to investigate the impacts of technology in everyday life, social relationships, environment and urban structure. He currently conducts research projects on alternative energies. His practice employs recycling consumer technology and biotechnology experiments. In his projects he has collaborated research centers such as the Research Group in Chemical and Process Engineering at the University of Cartagena, Spain; Mechatronics Area of Cinvestav; Institute of Engineering, Juriquilla, UNAM; Digital Arts, University National Polytechnic Institute Guanajuato, Salamanca. Gilberto Esparza, graduated from the School of Fine Arts at the University of Guanajuato, Mexico and spent one year on exchange at the Faculty of Fine Arts of San Carlos in Valencia, Spain. As an artist he has participated in solo and group exhibitions in Mexico, the US, Canada, Brazil, Colombia, Peru, Ecuador, Argentina, Spain, Holland, Belgium, Slovenia and Dhoa. He received the award for Latin American Production at Life 09 and second prize at Life 13 Fundación Telefónica of Spain and a Honorary Mention at the Prix Ars Electronica. He currently is a member of the National System of Art Creators in Mexico.

The installation “Plantas Autofotosintéticas” will also be part of the Ars Electronica Festival from 3rd to 7th September 2015. It will be shown at the cyberArts exhibition at the OK Center for Contemporary Art Upper Austria.