A Playful Design for A Future Society: The Conduit 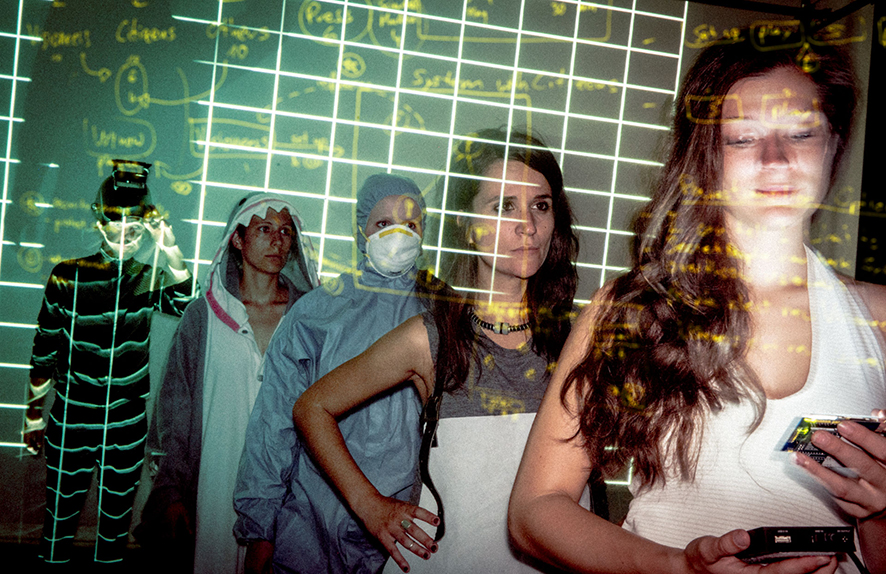 “Cultural Optimism” is a concept that seems to be sorely missing today, in times that many of us would much rather describe through the lens of cultural pessimism, as an exception to the rule that states, that every era yields equal amounts of creativity and thus generates a certain quality of cultural artefacts. For it seems that we live in days of crisis in which the culture that is being produced all around us is being taken into question, it makes sense that the Society for Cultural Optimism has developed a project called “The Conduit”. It is part performance, part interactive installation that investigates social engagement and the consequences of speculative technological and political frameworks. Participants will negotiate an 8 bit simulation of the future and its effects on our everyday social interactions. The Society for Cultural Optimism has developed a framework for the creation of a future society, which ought to be established by the visitors of the Ars Electronica Deep Space 8K. The way this simulation plays out is up to the participants and the roles that they choose to play. 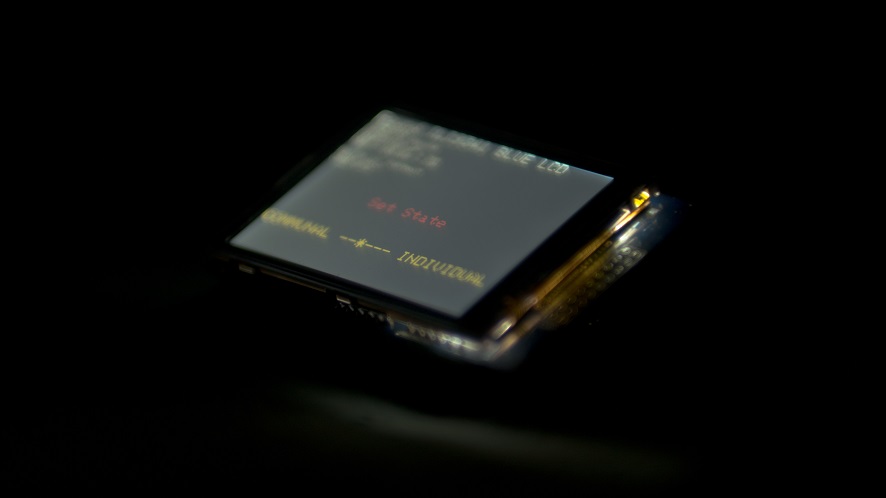 “The Conduit” – epitomised as an electronic device – communicates, just like the interactive role-play designed by the Society for Cultural Optimism . Credit: Friedrich Kirschner

“The Conduit”, which was developed at “The Cube” at Brisbane’s Queensland University for Technology during Professor Friedrich Kirschner’s Transmit³-Residency, is going to be installed in the great projection space in Linz. Visitors are invited to participate in a day of society-building and role-playing on Saturday, 13th of August, 7pm at Ars Electronica Center’s Deep Space 8K. It will also be showing at the Ars Electronica Festival 2016, Friday the 9th of September.2016 from 8 pm to 10pm.

Prof. Friedrich Kirschner and his team of game-developers, interactive theater-designers and contemporary puppeteers (zeitgenössische Puppenspielende) describe what visitors of the Ars Electronica Deep Space8K can expect when visiting “The Conduit”.

How did The Cube at QUT influence your idea to develop a Role Playing Game?

Friedrich Kirschner: What we as a group try to do is to frame technology as a social construct – so it is our focus not to consider technology just as a means to an end or in the context of one person dealing with a piece of technology. The point of interest is how a piece of technology engages in communication or inhibits communication in a larger context. The Cube is a very cool example because it is so monolithic. Considering the university space it is surrounded by, the students don’t communicate that much with it in their everyday routine. It rather sits there as a totem of technology, much more so than as a communication device that people use to share their thoughts. It was simply not playing a role in people’s everyday-life but still occupies a large amount of space. So we wanted to create a playful performance with it to make people interact with the CUBE in a way that would allow them to transcend their everyday roles and structures. 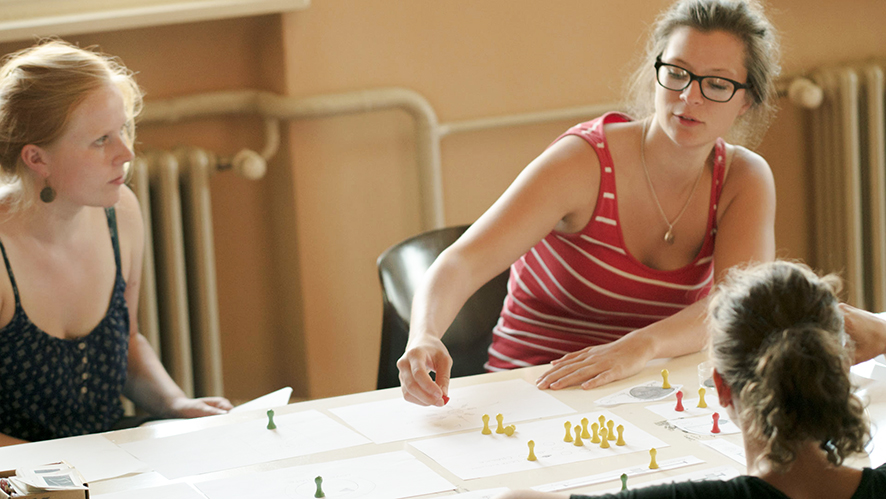 Friedrich Kirschner: Since our background is both in theatre and game design, we rather think of those set-ups as participatory performances, as in creating an aestheticized space around the everyday. We use game-technology to a certain extent. Our main focus is to have people participate in social scenarios. It’s the structures of society that we put up for negotiation, so that people can join in being a politician, a policewoman, a scientist, a barkeeper and so on.

The underlying question is: “What sort of society would we inherit if we give people the means to shape it themselves.”

There are very few rules set by us, more so a framework. You occupy a role that has a certain power-structure and action space attached to it. You are invited to negotiate with your fellow participants about what’s going on. How can we build a society where everybody has a say? 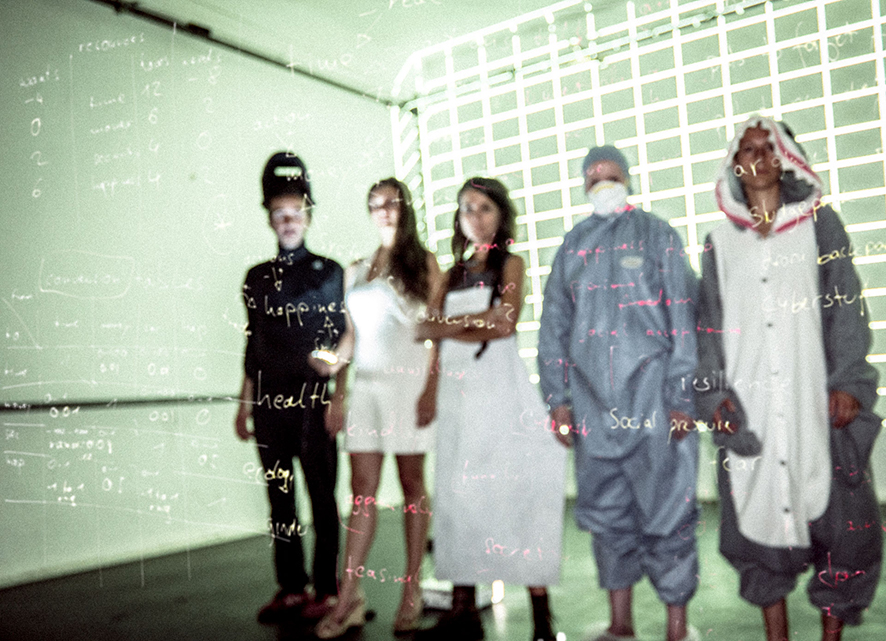 With the tasks generated – do you lean onto the recent political developments which lead to a lively, if not overheated societal debate?

Friedrich Kirschner: What we want to avoid is to pick up on topics you get from everyday news, because we don’t want people arguing in the same dialectics that shape around current events. We try to focus more on the undelying representations of how discourse works and how communication works in different parts of society in various power structures. The idea is for people to form opinions from someone else’s perspective, and how they would want them to be. Let’s assume your role is to be a policewoman ; it is up to you how to enact your role, either as good or bad cop or anything in between, really. The important part is that you then will face other people acting as protestors, or as someone who asks for help, and so on, and we don’t provide rules for these sorts of interactions.

We don’t call “The Conduit” a “game”, because if people are thinking about traditional games, you expect fixed rules that set up your action space. In contrast, the way we want to use simulation technologies is to provide a look at the everyday and how the everyday is structured. I think the way we usually shape stories with heroes and villains is not a particularly accurate way to represent the times we’re living in right now! Today, people are very much struggling with the idea of pluralism, and you can’t simply look at a phenomenon only from one angle.

“A lot of games today incorporate the use of weapons to create a strong and dramatic situation that forces you to act. But if you instead give participants a voice to negotiate in interactive theatre, and you give them roles through which they participate, then you’ll obtain an aesthetic framing around the everyday, which for me is just as strong and dramatic.” 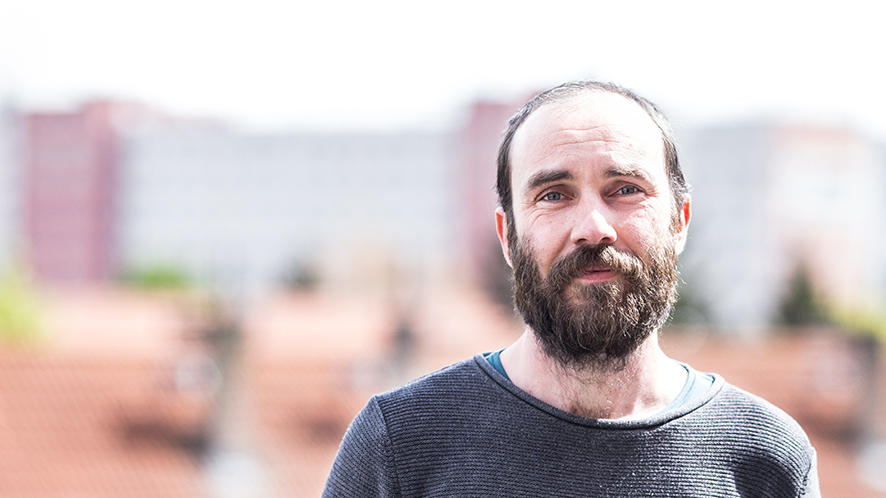 So what will you exactly do at Ars Electronica’s Deep Space?

Friedrich Kirschner: What we do at Ars Electronica is to give visitors the opportunity to simulate one day in a future society. They will live through that day, will have to talk to each other. It will be up to them to figure out if this is the place they want to live in and who is in power to shape the future or who shouldn’t be! We use 8 bit graphics to represent this simulation, because we feel that it is a great way to abstract and condense this huge thing called society. So we leave a great deal of diffuse space between the pixels that people can fill with meaning and purpose.

Do you lean on an image of existing societies or will it be a mere utopia?

Friedrich Kirschner: The people have to create that space and the rules themselves, based on a framework that we provide. And yes, that framework is based on our sociological and psychologicsl reading of the world and the human condition. If participants decide that in the future, they don’t want to work anymore, then they might want to have a lot of robots doing their jobs. But this is also a question of functionality and identity, because you do not only go to work for money but also to have a structure in life. I don’t think there’s one fixed utopia. Life is about considering many different options in complex situations and it often feels more like a struggle to keep the worst from happening than to work towards a perfect world. It feels like all around us, nations are falling to pieces, a strong right-wing movement all over Europe is on the rise.

One could hardly say that our reality comes close to any sort of utopia. But I am also not sure if such a thing as a utopian society will ever exist. The problem is that we are often using the same words but mean different things, because our terminologies have become these imprecise buckets of ideology. Therefore, it is more than ever important to be very precise in discerning what it really is that we mean when we’re negotiating about the state we want to live in. We have to fill in all the grey areas in between the stark black and white contrasts of opinions. 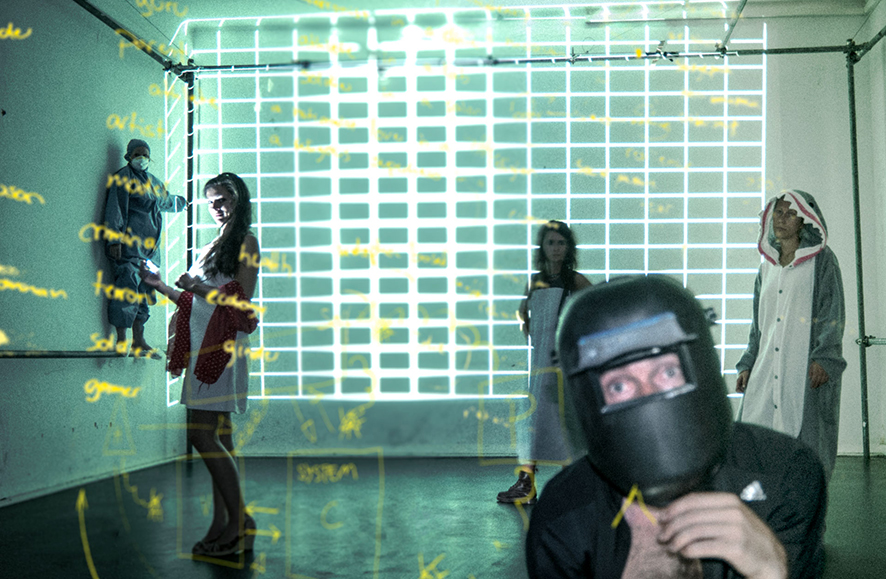 How much complexity does your installation involve? Since people might not be up to learning about the setup before they want to participate?

Friedrich Kirschner: Complexity is super important, but i think it can be achieved without providing a giant rulebook. Let’s stay with the example of a policeman or -woman. You’d probably need a lot of rules if you had no concept of police in your life. But we expect that the participants will all have some sort of concept of what police do. So we’ll leave it up to the people’s imagination to create the principles by which they act themselves. We don’t have to put everything into technological structures. Societies and the way they are constantly evolving are largely based on knowledge and attitudes. Thus, if people are coming to the Deep Space with the mindset of a videogame player, they’ll probably act different than people that engage in the situation from an improv-theatre point of view.  Behavior depends on experiences: when you have been beaten up by police in real life the day before, you’d play different  than if police has treated you kindly. Summing it up, it is fair to say that behavior is based on context, experience and expectations. Consequently, the construction of societies is also a mix of all those factors shared by a diverse set of people. 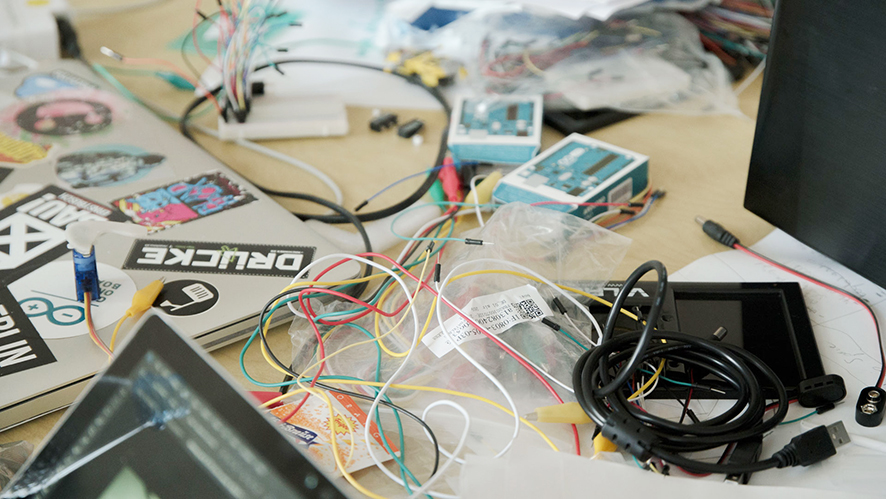 “Complexity is super-important”: Some of the tools used in creating the interfaces. Credit: Friedrich Kirschner

What will you do with the findings of “The Conduit”?

Friedrich Kirschner: We hope that we’ll get a lot of stories being shared among the participants. The visitors will meet other people and exchange ideas and views on everyday life and what it ought to be. This is our main focus. We’re not doing this to yield a set of data points that can be interpreted as empirical truth. Our goal is for players to get something  out of this playful social discussion. Which brings me back to what we discussed earlier: “The Conduit” is a participatory performance, and you don’t win or get a score like in a game. We usually hang out with the participants afterwards, go for a drink and share experiences, because we also don’t know all of what happened. And of course, we’d like to listen to reactions on how things worked or did not work out for them, according to their idea of a perfect society.

“The Conduit”  is being presented at Ars Electronica Center in Linz, Austria. If you want to try out the roleplay-theater/society building game, you can do so on the 13th of August 2016, Saturday, starting at 7PM, or at this year’s Ars Electronica Festival on the 9th of September 2016, from 8 to 10 PM.

Friedrich Kirschner (DE): Friedrich Kirschner is a filmmaker, visual artist and software developer. He re-purposes computer games and realtime animation technology to create animated narratives and interactive performances. His work has been shown at various international animation festivals and exhibitions, including the Laboral Gameworld exhibit in Gijon, the American Museum of the Moving Image in New York, the Ottawa international Animation festival and the Seoul Media Art Biennale.