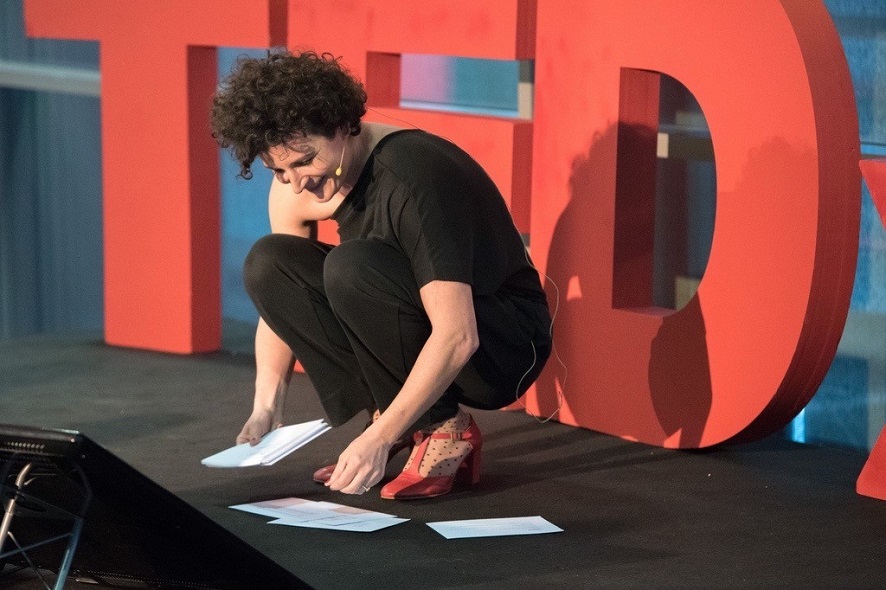 She used to be an attorney-at-law—a specialist in incorporations and start-ups, to be precise. And her job regularly entailed toning down the high hopes of entrepreneurs who had innovative, exciting business ideas by warning them of the risks, dangers and legal pitfalls. What she does now is actually quite the opposite. As communications consultant and curator of the TEDxLinz international idea conference, Claudia Novak’s current mission is encouraging people to deal more openly with flops and thereby bring to light potential and opportunity. The specialist in the field of communication about things having gone wrong will speak at the Ars Electronica Festival’s Get Inspired innovation forum on September 6, 2018 about the potential of a positive culture of dealing with errors and the initial steps that can be taken to optimally establish one. She will also speak about her work and the topic of error culture as part of the lecture series “Future in a Nutshell” at the Greiner plastics group in Kremsmünster.

We recently had the opportunity for a preliminary session with Claudia Novak and found out how an open, matter-of-fact way of dealing with errors can lead to success. 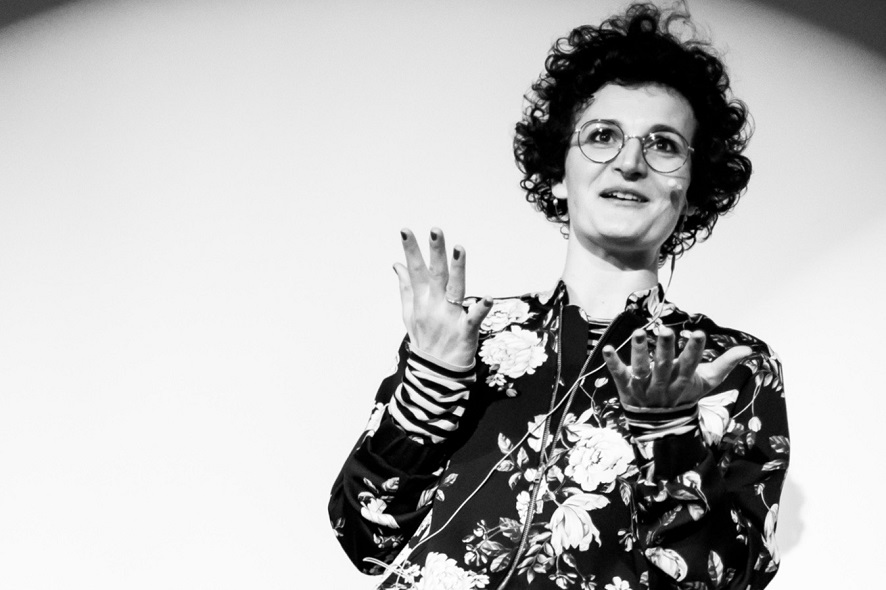 You’re now an expert in error communication but you used to be a lawyer specializing in start-ups and incorporations. How did this occupational transition come about?

Claudia Novak: It was actually due to a very high level of frustration with my role as spoilsport. It’s great and impressive to be approached by people who are beaming with joy and full of enthusiasm, euphoria and drive. When you create something new, you reveal something of yourself, and that engenders a high degree of vulnerability—whether it’s making a work of art or founding an enterprise. As an attorney, though, I was always the one who had to say: that doesn’t work, liability considerations, someone could sue over this, you need to get this or that authorization … and I saw how I had wiped the smiles off those previously beaming faces. I had destroyed their euphoria and often deprived them of their courage to think big. So what I did was to kind of change sides. I’d like to encourage people to dare to do something new even if there’s no guarantee of success. In addition to my legal work, I had already been specializing for years in the field of communications; it had already been my pet passion. So the jump wasn’t all that far!

How does one use error communication to accomplish exactly what you just described—helping people make their dreams come true?

Claudia Novak: In any case, one has to encourage them. The point is to strike a good balance. Certain risks can be anticipated and minimized, but, to some degree, one has to run risks. You have to strengthen people’s resolve to also really do that. It’s OK for a project to fail. That’s exactly how it was for me when I took leave of my safe career path as a lawyer, which I had worked long and hard to achieve, and had completed a course of training that had been extremely strenuous at times. My focus on the subject of dealing with mistakes as well as the work published by Brené Brown, a scholar in the field of social work who’s done research on vulnerability and courage, were a big help to me. That’s what enabled me to see that only when something goes wrong can something new emerge. When I accept the fact that something can fail, and when I can rest assured that failure doesn’t equate with disgrace, then this can give rise to something outstanding. This gives you the courage to say: I can fail and don’t have to hush it up. And when you’re transparent, you have the benefit that others can help you, or forms of cooperation arise that hadn’t occurred to you before.

Is this what you mean by a constructive culture of error?

Claudia Novak: “A constructive culture of dealing with errors” is really a mouthful. This term is actually used in analyzing an in-house corporate culture. What I just referred to was actually meant more in response to the question of how to provide support that enables people to bring something to fruition. It’s more a matter of this internal process. Getting people in organizations and companies to take this approach calls for a corresponding corporate culture. It’s essential to avoid any form of blame culture and, instead, to create a culture of trust. I also like to compare this with a family culture—unspoken and unwritten rules or guidelines, codes and patterns prevail and are often tacit, unconscious or taboo. But there can also be a part of a corporate culture that subtly propagates a feeling that everything has to be perfect. But demanding of employees that they have to do everything perfectly and are not allowed to make mistakes is the most destructive climate possible! The fear of making an error leads to the biggest errors. If, instead, there’s trust so that errors can be discussed openly, a different culture arises, one in which mistakes can be dealt with openly and objectively and, in this way, the collective can learn from individual mistakes and vice versa.

In a textbook negative culture of dealing with errors, there’s often talk behind the back of the one who caused the error—thus, talking about instead of with one another. That produces an atmosphere in which one can’t be open and, therefore, not constructive either. The point isn’t cultivation of errors, but rather a culture of dealing with errors. The ultimate aim is to minimize errors in the future and to make optimization possible. Or, in line with the adage “Taking a wrong turn helps you to learn your way around,” this is the right path to discovering new opportunities.

Claudia Novak: The way a collective—be it a family or an enterprise—deals with errors is determined by the people involved. Thus, the key is the interplay of these people. There are the classic to-dos that management consultants recommend—things like objectivity instead of emotionalism, seeking the cause and not the guilty party, an error reporting system including inducements to report errors, a corporate culture of showing appreciation, and debriefing & team feedback talks. What seems important to me personally is, first of all, for everyone to be able to “practice” their approach to dealing with errors on their own errors, and, in an internal monolog, explore where self-deception stops and self-reflection begins. If just one single member of a team begins to speak openly about his/her own mistakes and, in doing so, doesn’t fall into the role of victim but rather goes about it in a matter-of-fact, responsible, goal-oriented way, then this can really be contagious and have the long-term effect of more openness. So take heart! Someone has to get the ball rolling. If that person is an executive, then, of course, the impact is greater. Provided that it’s genuine and meant sincerely.

Nevertheless, my area of specialization isn’t organizational development, but rather the field of communication, internal and external. With respect to error communication, two key components that are often underestimated are credibility and trust. We live in a time in which many people have stopped trusting. People want to be able to trust again. To trust that one isn’t witnessing a perfectly staged theatrical performance, and instead that what’s being put forth is transparent and honest. That the listener can trust that what’s being said is true. In my opinion, a forthright mode of dealing with errors—both externally in corporate communication as well as internally—can lead to an increase in trust. For me, the crux of this matter is the paradox that there’s always this prevailing idea of having to have a flawless exterior in order to have a good image. But somebody who doesn’t admit mistakes loses credibility at some point. What prevents people or enterprises from exhibiting vulnerability and owning up to our errors? The paradox is that the basis for trust or authenticity is precisely this openness. What this insight means to me is that you have to encourage people and dispel their fear. The perfect image also simply isn’t believable anymore. We live in a Digital Age in which every organization is like a glass house. So I find it a lot smarter to admit mistakes, learn the lessons from them, and develop and communicate a strategy to avoid errors in the future.

What will you be talking about at the 2018 Ars Electronica Festival?

Claudia Novak: I’d like to be a source of inspiration as to how we as individuals and as a society, as organizations and companies, can optimally deal with errors and their causes. In a nutshell—the best way to make the best of them. I think that it’s easier than people think. A culture of coming to terms with mistakes isn’t rocket science. We simply need people who are courageous and, thus, also an encouraging environment. What I really want is to banish the fear we all have inside us.

Claudia Novak is a communications expert and a law school graduate. She studied at the Universities of Vienna, Paris and Innsbruck, majoring in European law. In addition to her international legal jobs (European Commission, the Austrian Parliament’s General Settlement Fund for Victims of National Socialism, law firms in Brussels and Vienna, passing the Austrian bar exam and admission to the Chamber of Attorneys in Vienna), she specialized in communication in her training as a coach at Institut Kutschera – Kommunikation in Resonanz, and in her studies leading to a master’s degree in PR & Strategic Communication at Danube University Krems, where her thesis on the potential of a culture of effectively dealing with errors to strengthen an organization’s reputation was supervised by Michael Bauer, an expert in crisis communication and press spokesman of Austria’s Ministry of Defense. Claudia Novak is also curator of the TEDxLinz international idea conference. She is self-employed as a communications consultant and speaker.

Claudia Novak will speak at the Get Inspired symposium, the Ars Electronica Festival’s innovation forum, on Thursday, September 6, 2018, 11:00–12:30, in the Conference Hall at POSTCITY Linz. More information about the Get Inspired innovation forum is available here. She will also speak about her work and the topic of error culture as part of the lecture series “Future in a Nutshell” at the Greiner plastics group in Kremsmünster.