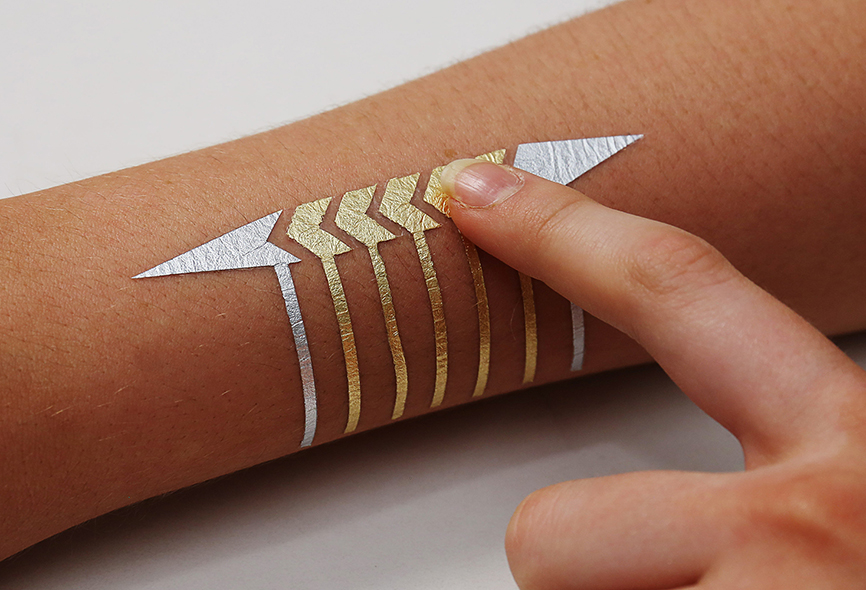 “human (un)limited”, the second joint exhibition project by Hyundai Motorstudio and Ars Electronica, is dedicated to the success story of humans and its possible next chapters. At the center of this artistic and scientific research are we humans ourselves, our weaknesses and strengths and our eternal search for our place in the world. Until the end of February, three exhibitions in Beijing, Seoul and Moscow will focus on the limits we encounter as individuals and as a society, limits we impose on ourselves and limits we seek to expand and overcome.

Based on the aesthetics of temporary metallic tattoos, DuoSkin – part of the exhibition in Beijing – creates devices on the skin that resemble jewellery. Users can use them to control their mobile devices, display and store information on their skin. The creators believe that in the future, on-skin electronics will no longer be packaged and mystified in black boxes, but instead converge towards the usability, expandability and aesthetics of body decorations, forming a DuoSkin (i.e. a second skin) that is integrated to such an extent that it seems to have disappeared. Artist Cindy Hsin-Liu Kao talked to us about how the border between technology and the human body will become even more blurred in the future.

For a long time, technology was synonymous with tools or large, heavy equipment. Today, technology is becoming less and less visible, even one with us. Which vision is the driving force behind the development of on-skin interfaces?

Cindy Hsin-Liu Kao: At the Hybrid Body Lab, which I direct, we are interested in the convergence of technology and culture on the skin surface. We can extensively explore these slim interfaces which sit on the body surface, much due to the miniaturization of sensor devices and the development of novel materials in the field of engineering. However, while technological developments enable our work, we are interested in bridging the gap between the technical aspects and the broader cultural and societal contexts on what it now means to wear technology directly on your skin and to design differently for these concerns. This will become an increasingly important question as the body surface is complex and meaning-laden, and unlike any other media, not just another surface to technologize. In essence, we are inspired by, yet at the same time, not entirely content with the current state of technology. This tension is what drives our inquiry. We design artifacts as a lens to explore alternative possibilities of what these interfaces could be.

We spend more and more time in digital spaces. We are moving in a world in which our senses as well as our cultural techniques reach their limits. We cannot see the data traces we leave behind. We don’t know who is watching us here and recording every step we take. Yes, we increasingly don’t even know whether our counterpart is a human being or a machine. What does it take for us to be able to move in the digital world just as safely and self-determinedly as we do in our natural environment?

Cindy Hsin-Liu Kao: This question and anxiety around control and agency of technology, once it becomes so close to the body, is critical to whether they will eventually be embraced, or rejected when they move into the general-use realm. I think it is an essential role of designers of these emerging interfaces to start engaging broader populations in the inquiry of these questions, through public exhibitions to hands-on prototyping of these emerging interfaces, and also to provide opportunities for playful interactions which these devices. For instance, for DuoSkin, we actively conducted workshops inviting people to make, and also envision possible use cases, and concerns towards on-skin interfaces. Only by starting to understand how people from a broad range of backgrounds and cultures perceive these devices, and their concerns towards them, as early as possible, can we as designers be proactive and design in a way that respects the user’s preferred sense of agency and control.

Researchers and developers as well as artists drive technological progress. They create new possibilities and business models that – sometimes quite unexpected – have consequences for us as a society. How do you see your responsibility as a researcher, as a developer? Which limits do you want to overcome with your work, which ones perhaps impose on yourself?

Cindy Hsin-Liu Kao: As a researcher and designer, I think it is crucial to engage the public with these emerging interfaces as early as possible to understand perceptions. To design emerging interfaces which not only sit in the lab but can be prototyped and experience by broader audiences is important. For our DuoSkin project, beyond several smaller-scale workshops, our lab recently deployed a large scale and cross-cultural on-line study on hundreds of participants to understand perceptions towards the on-skin interfaces we designed. This, in turn, informs the next iteration of our work.  I think these investigations should happen as early on as possible in the design exploration process so that design decisions and changes can be made and not wait until the technology is fully deployed as a product, as that is often too late. Only by understanding perceptions beyond our technological imagination, and to design with a sense of humility, can we start to tackle these challenging problems. 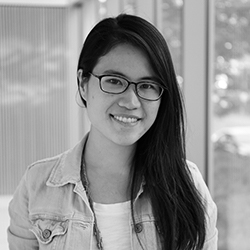 Cindy Hsin-Liu Kao is an Assistant Professor of Design + Environmental Analysis, and a field faculty in Information Science at Cornell University, where she founded and directs the Hybrid Body Lab. The Hybrid Body Lab investigates the convergence of culture and technology on the skin surface. The Lab also creates novel materials, processes, and tools for crafting technology on the body surface. Kao’s research has been presented at leading computer science conferences and journals (ACM CHI, UbiComp/ISWC, TEI, UIST, IEEE Pervasive Computing) while receiving media coverage by CNN, TIME, Forbes, Fast Company, WIRED, among others. Her work has been exhibited and shown internationally at the Pompidou Centre, the Boston Museum of Fine Art, Ars Electronica, New York Fashion Week, and more. She has worked at Microsoft Research developing cosmetics-inspired wearables and is a recipient of the Google Anita Borg Scholarship. Among her awards include several Honorable Mention/Best Paper Awards in top computer science conferences (ACM CHI, UIST and ISWC), the A’Design Award, the Fast Company Innovation by Design Award Finalist, an Ars Electronica STARTS Prize Nomination, and the SXSW Interactive Innovation Award. Dr. Kao holds a Ph.D. from the MIT Media Lab, along with a Master’s degree in Computer Science; and two Bachelor’s degrees in Computer Science and in Technology Management, all from National Taiwan University.

DuoSkin is part of the human (un)limited exhibition, a series of exhibitions by Hyundai Motorstudio and Ars Electronica, which runs until February 29 in Beijing, Seoul, and Moscow.