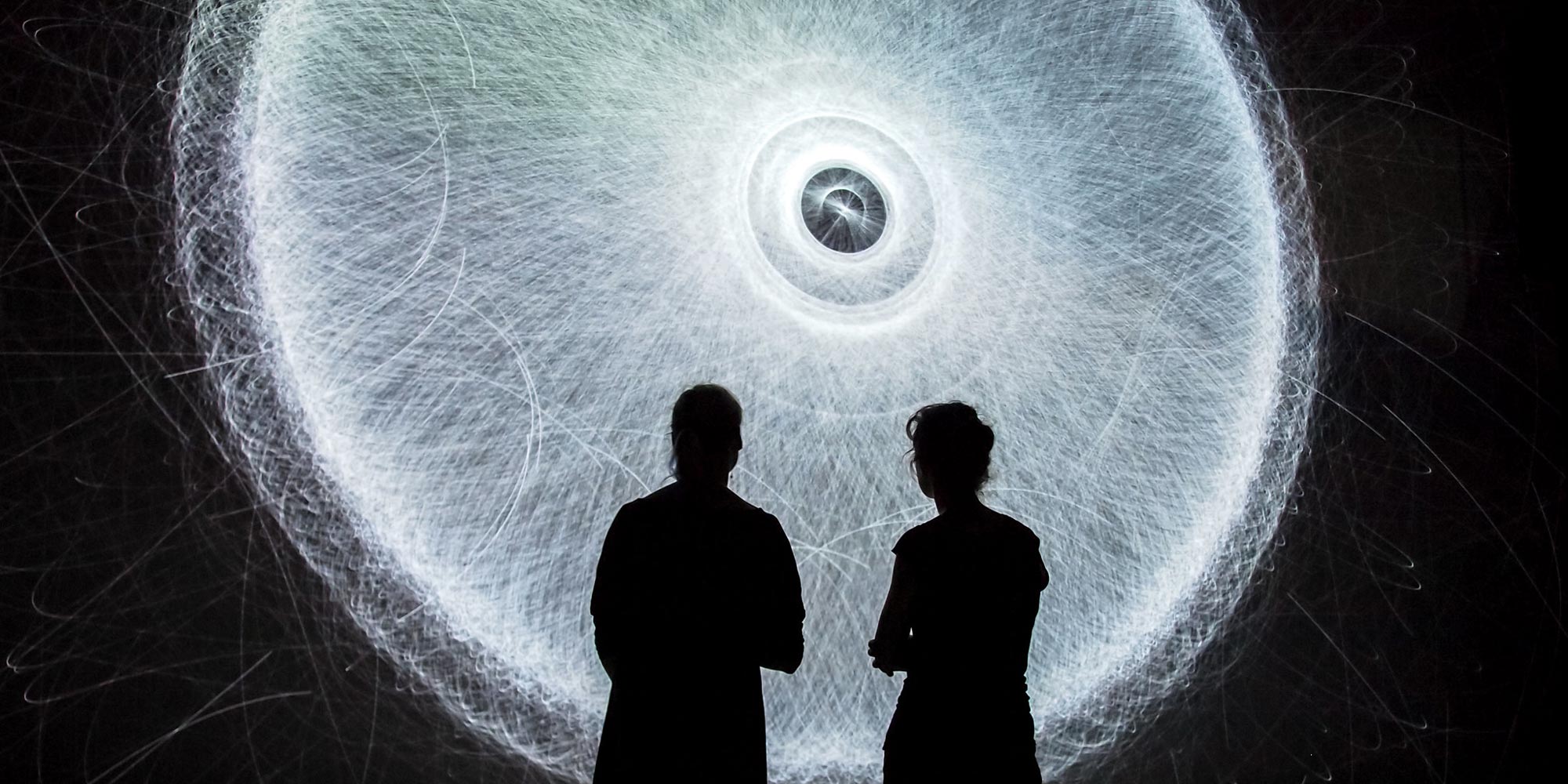 ‘Resonant Media – Possibilities of 8K Visualization’ takes an artistic and scientific approach to explore the new possibilities of 8K from diverse perspectives. As part of the “8K Future Projects” collaboration between Japan’s largest public broadcaster NHK and the Ars Electronica Futurelab, the exhibition – taking place in Shibuya, Tokyo from March 14 to March 31, 2021 – presents a diverse range of projects that explore the future of 8K beyond the existing frame.

By starting the content, you agree that data will be transmitted to youtu.be.Data Protection Declaration
Resonant Media – Possibilities of 8K Visualization: Impressions from the exhibition in Tokyo, Video: NHK

Since 2018 the collaboration between Ars Electronica Futurelab and Japan’s largest public broadcaster NHK focuses on developing several key scenarios that explore the future of the next generation of the UHDTV technology 8K. Different applications of 8K content have been explored based on issues of image composition and new forms of staging; various scenarios were developed and tested as “Beyond the Frame – 8K Future Projects” and “Cascade”.

High-resolution insights into the research on the possibilities of the UHDTV technology 8K are the subject of the forward-looking exhibition ‘Resonant Media – Possibilities of 8K Visualization’ which experiments with many innovative ways of integrating the cutting-edge technology into an increasingly digitalized everyday life. Together with NHK, the Ars Electronica Futurelab is exploring new formats, innovative interaction methods and experimental settings that influence perception within the 8K world. 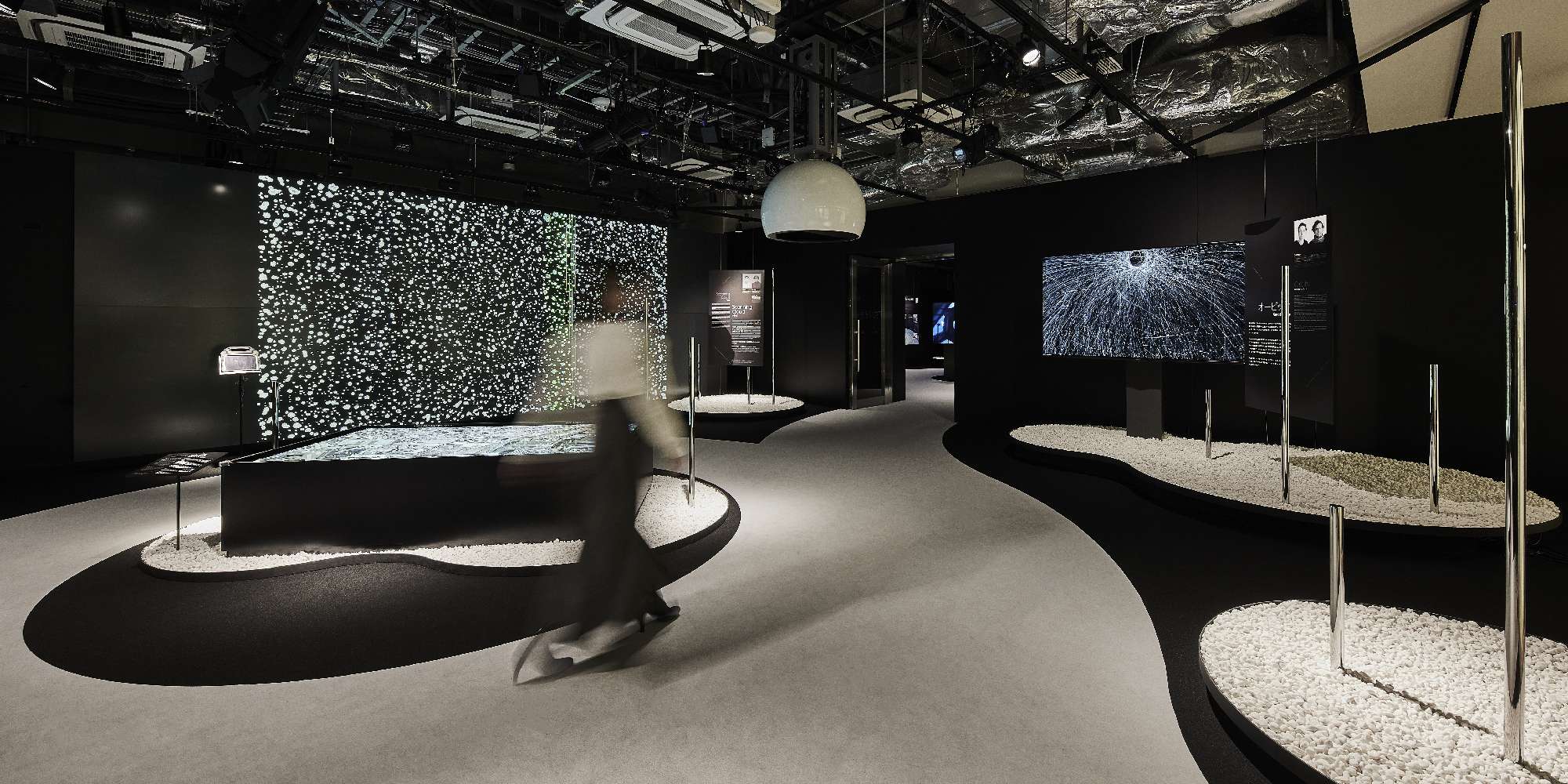 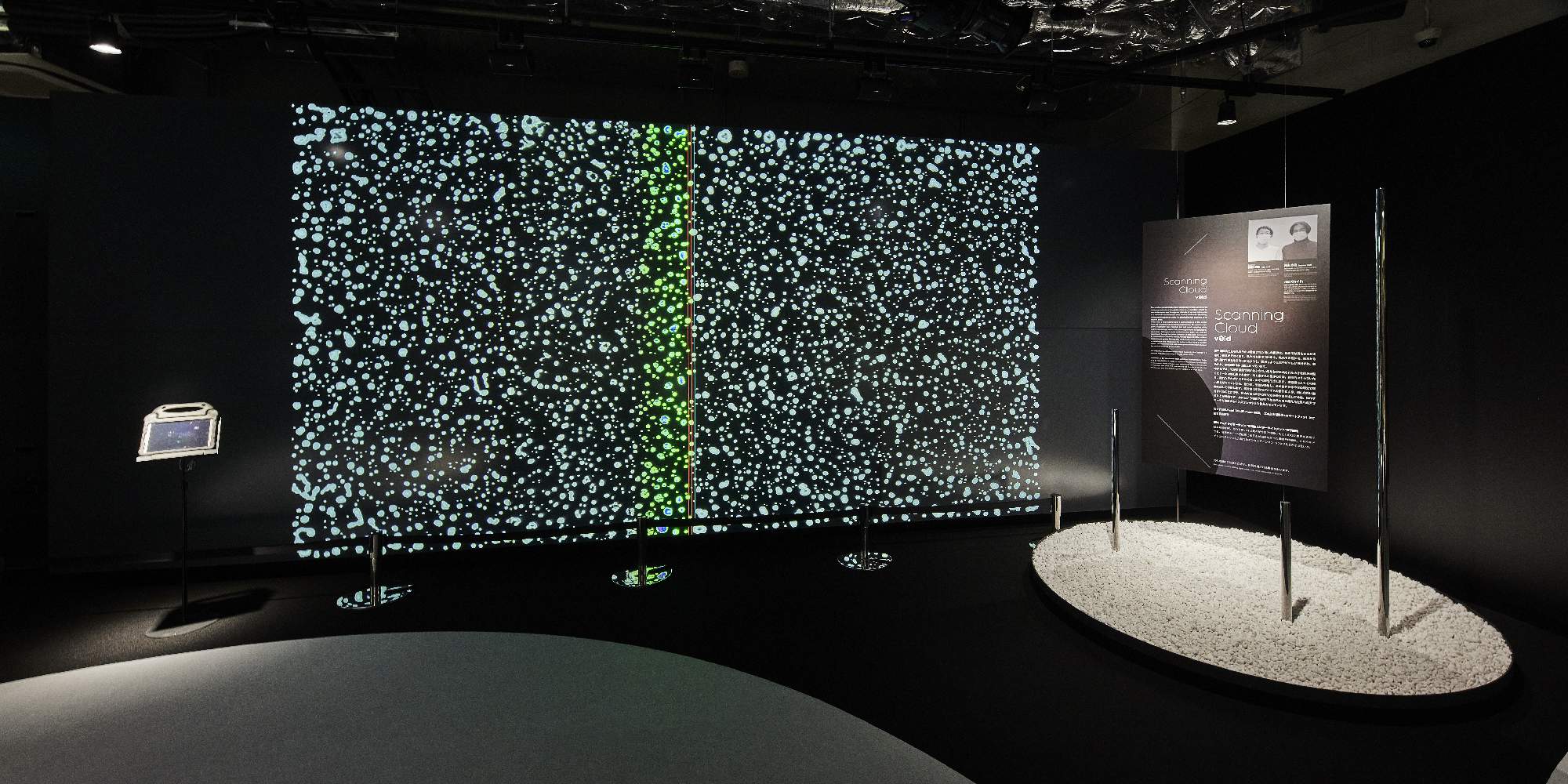 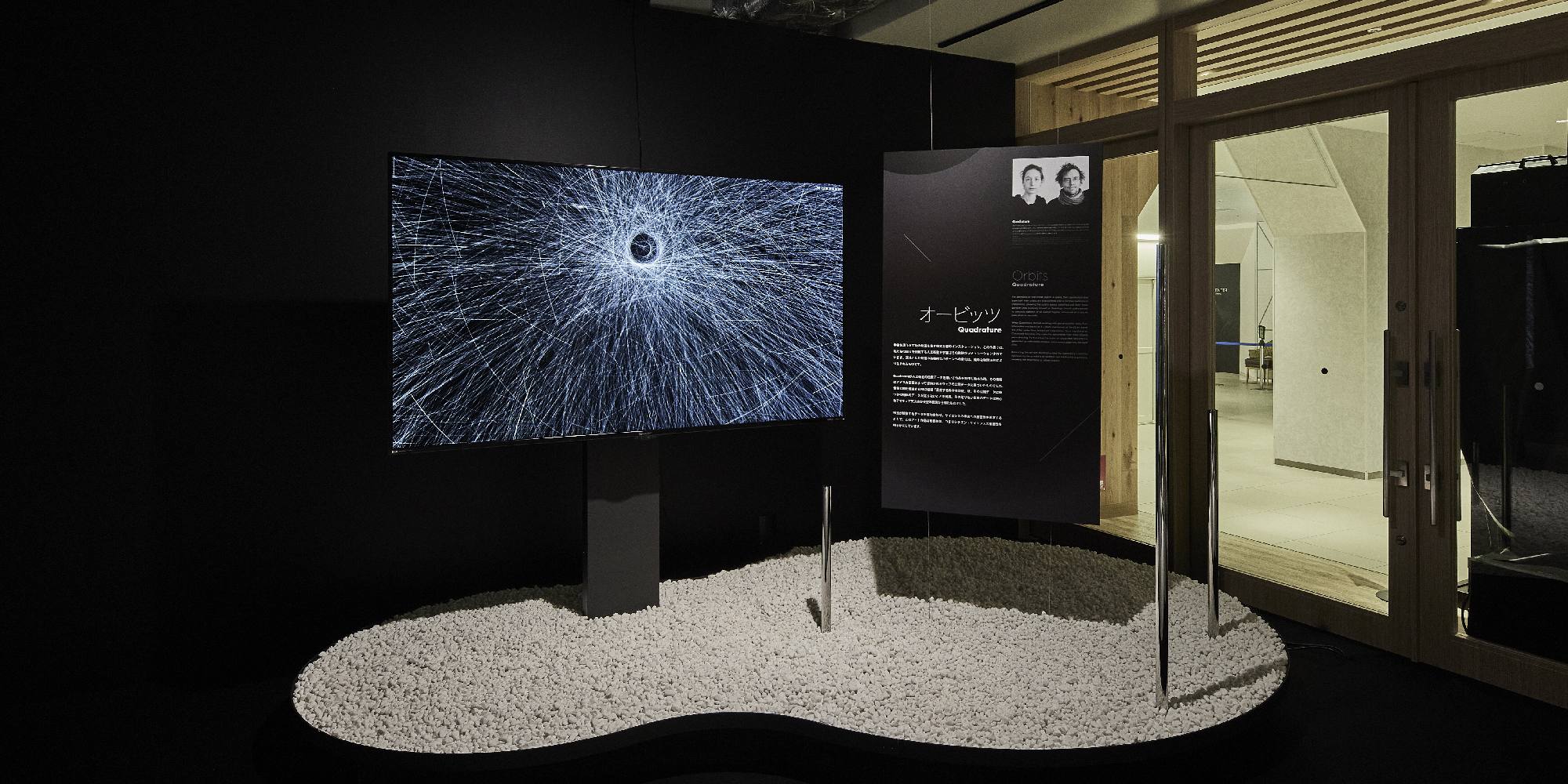 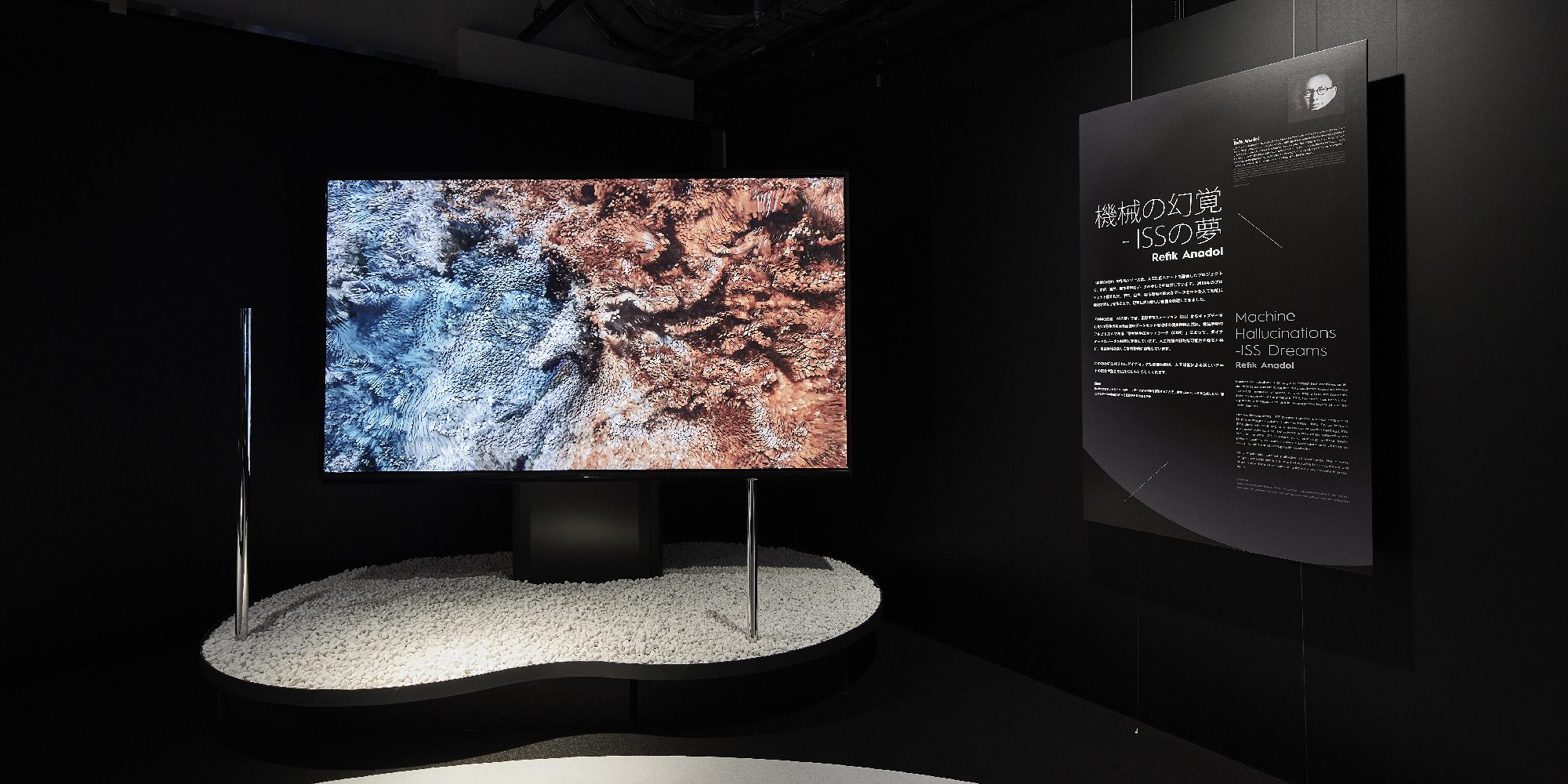 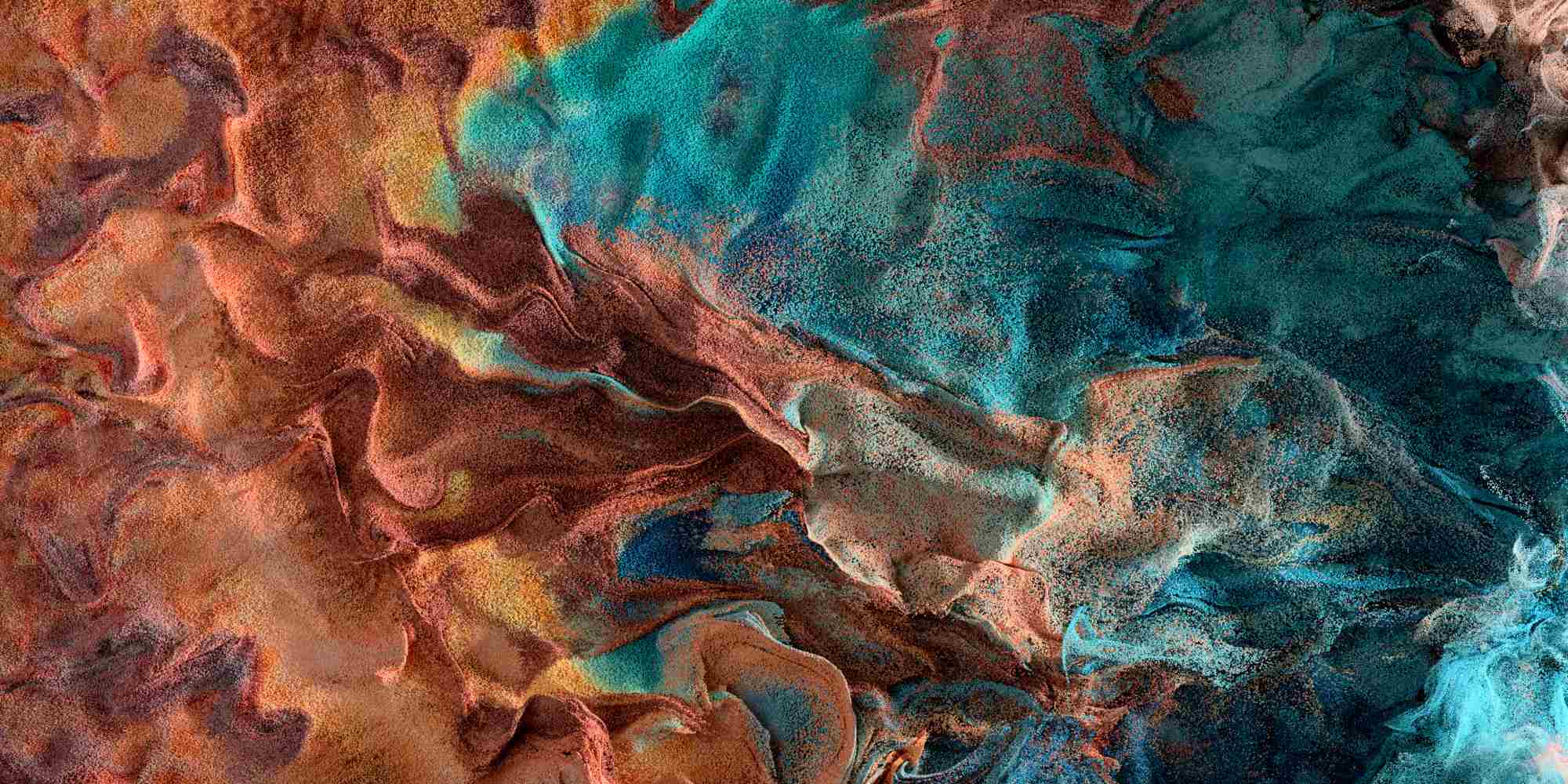 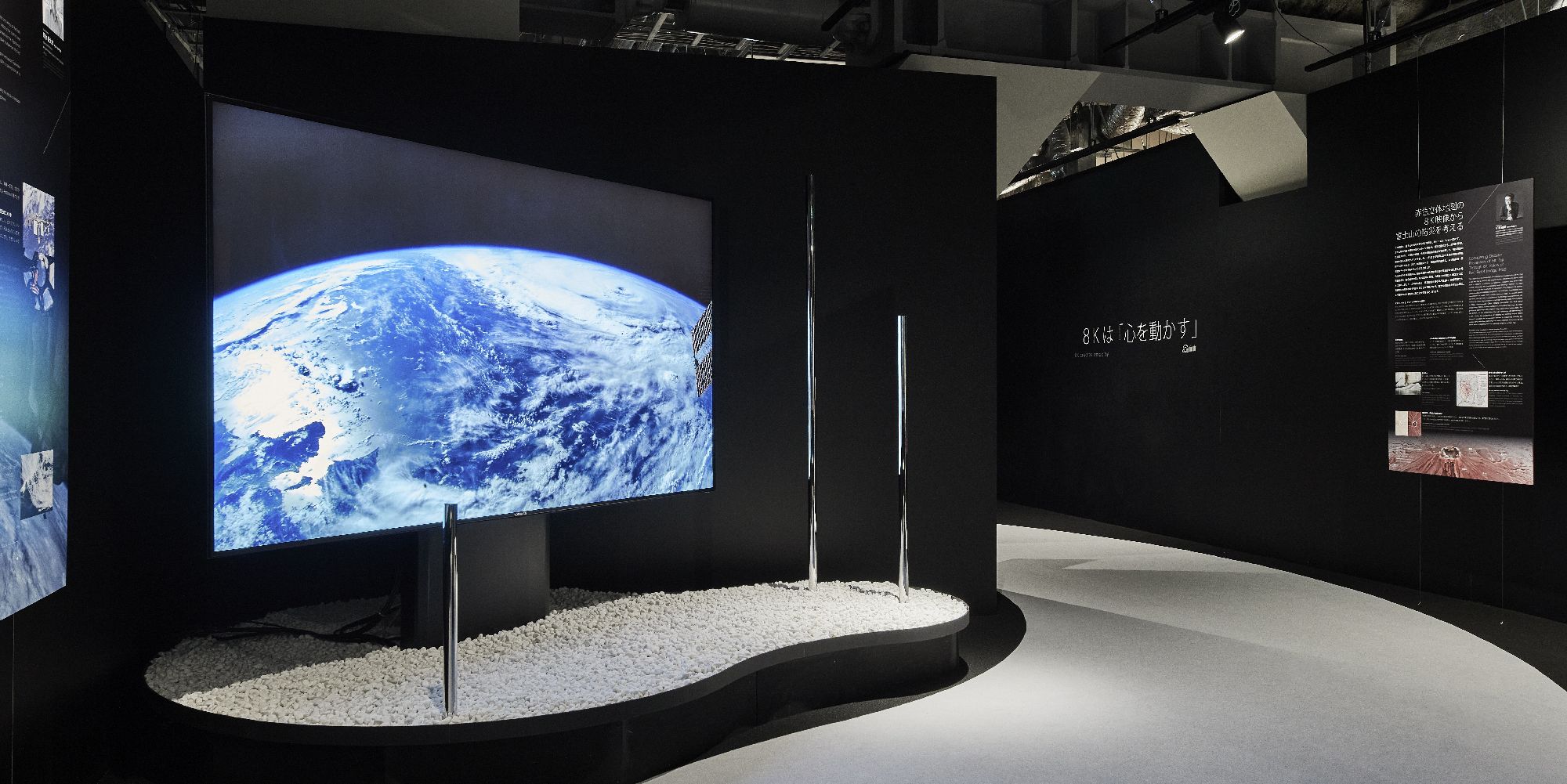 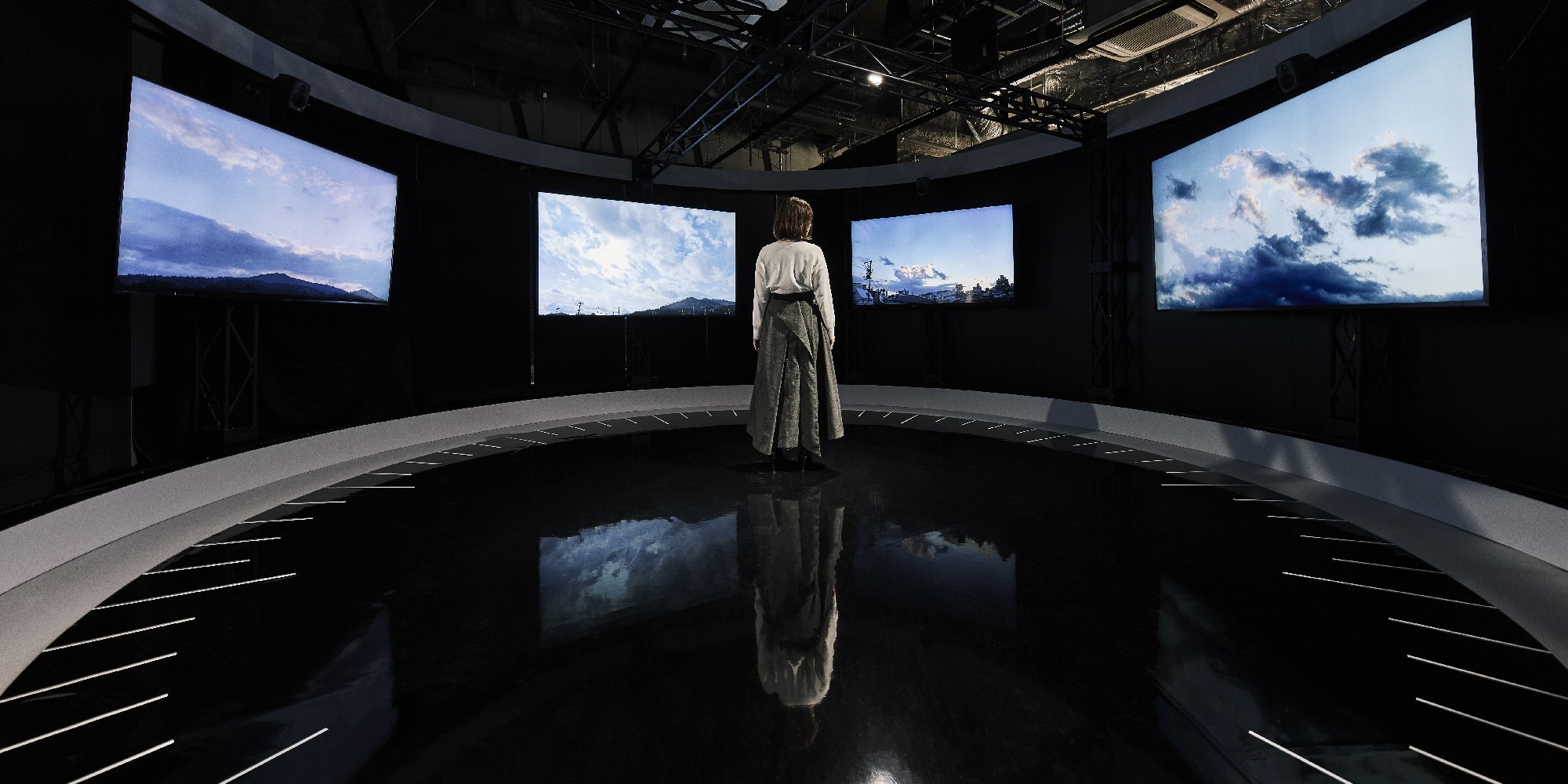 For the exhibition the Ars Electronica Futurelab and NHK selected various artistic-scientific approaches connected to the 8K technology. Visitors are invited to enter the exhibition and explore the world of 8K by two virtual guides presented on two vertical positioned screens at the entrance. 8K Cascade Guide is an exhibition guide that combines two types of research conducted by NHK and Ars Electronica Futurelab: 8K Lifescale, which represents media content in a life-size format, and 8K Cascade, which represents media content in a vertical format. Vertical, life-size communication allows for more realistic dialogue and emotional connection.

In the first exhibition room the Berlin-based artist duo Quadrature (DE) presents their work “Orbits”. The aesthetics of man-made objects in space, their appearance and especially their orbits are transformed into a minimal audiovisual installation, showing the poetic dance satellites and their trash perform while revolving around us. Seemingly chaotic paths mutate to amazing patterns of an almost organic nature—all of it due to pure physical necessity. Official satellite data supplemented by data from amateur astronomers form the visual basis for the aesthetic encounter, which explores a hidden layer of human infrastructure.

“Scanning Cloud” by Japanese design group vØid (JP) shows on a large screen a swarm made up of tiny grains that organically draw together and pull apart. This microscopic world is captured by scan lines, taking on color and emitting tones, and can be experienced through the spatial sensation of this model and sound. By manipulating a handheld device, viewers can control the motions of microscopic grains. Through this model and sound, it is possible to experience and manipulate the nature of the world of a giant swarm.

“Hakoniwa – Tokyo from Above” by NHK Technologies (JP) allows the viewers to experience the dynamic beauty of the city as a moving Hakoniwa – a miniature garden in a box popular in Japan – by viewing the scenery of Tokyo from above in 8K.

In the second exhibition room two installations form a dialogue between art and science, both basing their data from the International Space Station (ISS). “Machine Hallucinations – ISS Dreams” from media artist and director Refik Anadol (TR/US) transforms a vast data set of 1.2 million images captured from the International Space Stations (ISS), along with additional satellite images of Earth’s topology, into a dynamic data painting.

Opposite of this installation „A Typhoon Seen From ISS“ by researcher Araki Kentaro (JP) shows 8K images of Typhoon No. 10 in Sept 2020 taken from the International Space Station. The 8K camera on board the ISS makes it possible to capture videos of the Earth in even more realistic detail. Unlike with images from meteorological satellites, it is possible to observe the so-called “multiple-eye structure” in which clouds grow thick in a spot a slight distance from the eye of the typhoon.

The interactive installation „World’s First 8K Moving Image of Cell Destruction Caused by New Coronavirus Infection“ by Associate Professor Nakayama Emi (JP) enables the viewers to observe the details of the process by which the virus destroys the infected cells. Observation using ultra-high-definition 8K video of cells with a wide field of vision is greatly anticipated to lead to new discoveries not only in viral infections, but also in areas such as cancer cell behavior and apoptosis.

„Considering Disaster Prevention of Mt. Fuji Through 8K Video of Red Relief Image Map“ by researcher Chiba Tatsuro (JP) is a CG simulation visualizing the topography of active volcano Mt. Fuji in 3D that makes it possible for non-expert viewers to intuitively identify topology and elevation, allowing for more concrete measures to be taken when preparing for the volcanic eruption of Mt. Fuji.

„The Global Spread of the Coronavirus 8K Visualization of Big Data“ by Yamabe Masaki and Nakagawa So (JP) depicts the big data of the mutated virus in 8K using NMAPS, a visualization system developed by NHK. The exhibit displays when and where variant strains of the virus have been discovered. By filling in a map as time passes, the transmission route of the virus becomes visible. Due to the ability to view complex, detailed phenomena with a wide field of vision, this tool is anticipated to help guide specialists debate and make new discoveries.

The exhibition is concluded by „Resonant Memory“, a visual and audio installation by video director/ editor Takahashi Rikako (JP) jointly conducted by NHK and Ars Electronica Futurelab for the 10th anniversary of the Great Eastern Japan Earthquake. Using 8K technology, the installation expresses the memories of the earthquake with the words of the people and the scenery of the region to tell a story of recovery and hope for the future. The installation shows how nature and society are recovering from the destruction caused by the earthquake, and how people came together to help and care for one another amid the disaster. Experiencing the memories of nature and people in the 8K space, with its fine detail, creates an emotional connection as if you were there with that person. The overlapping panoramas of Tokyo and the disaster areas symbolize destruction and reconstruction, and the clock’s scale the passage of ten years. The installation helps us remember human solidarity, and the strength of nature and society, as a resonant memory for the future.

By starting the content, you agree that data will be transmitted to youtu.be.Data Protection Declaration
Inside Futurelab: NHK meets Ars Electronica Futurelab – Resonant Media

As an alternative to visiting the exhibition on site in Tokyo, Ars Electronica Home Delivery also broadcasted a virtual guided tour giving insights into the exhibition on March 23, 11am. Following the presentation of various artistic-scientific approaches experts invited to a panel discussion in the Deep Space 8K to reflect and discuss the impact of 8K.

Read more about the collaboration with NHK and the “Resonant Media” exhibition in the Interview with Nicolas Naveau on the Ars Electronica Blog: 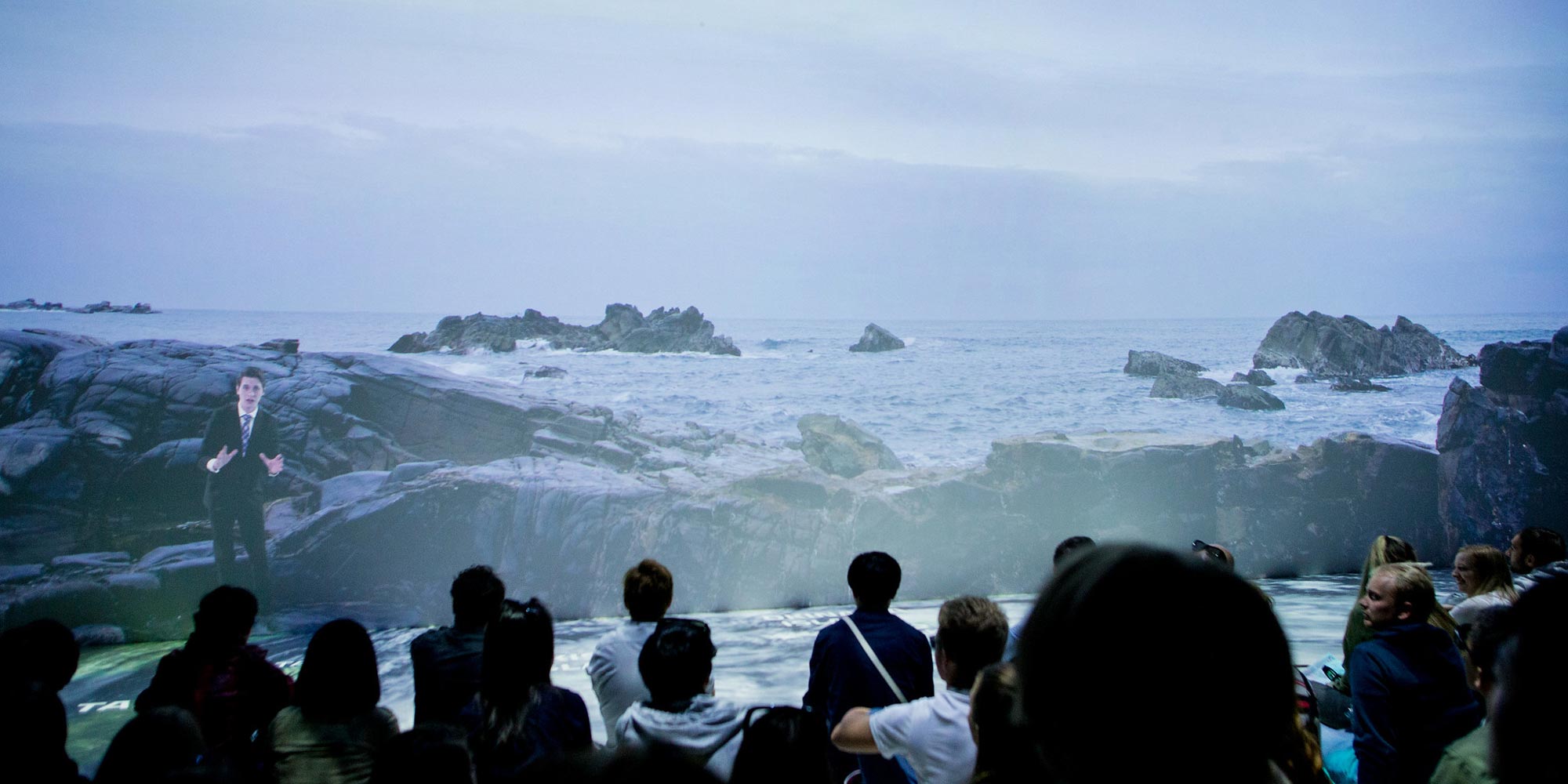 Resonant Media – How 8K can affect perception and emotion 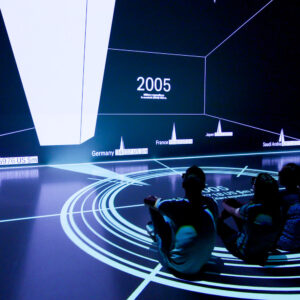 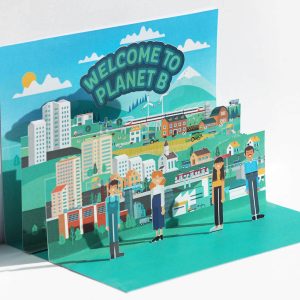 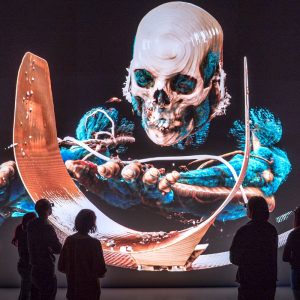 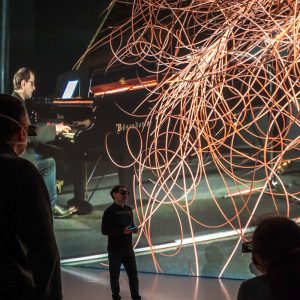 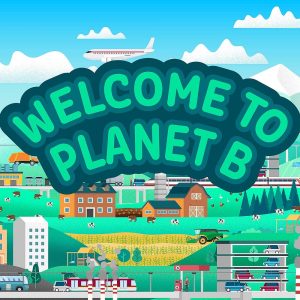 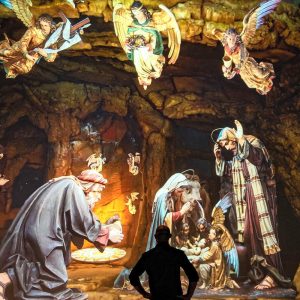 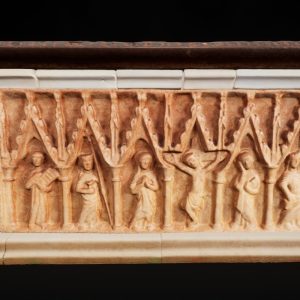 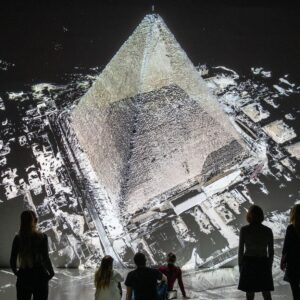 The Great Pyramid in 3D 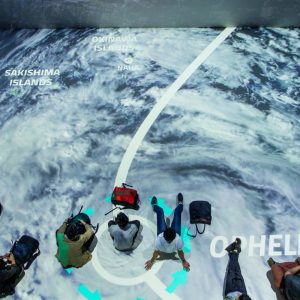 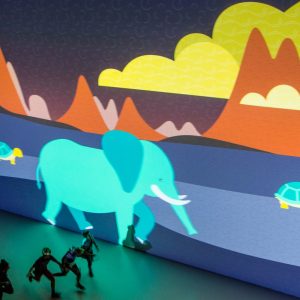 Beyond the Frame — 8K Future Projects 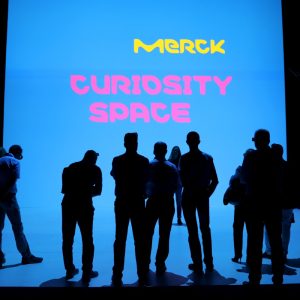 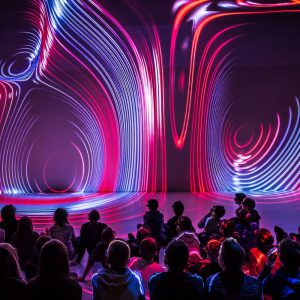 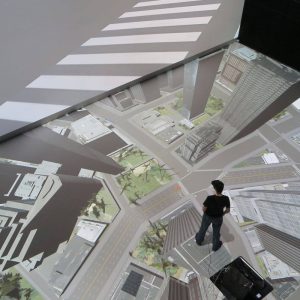 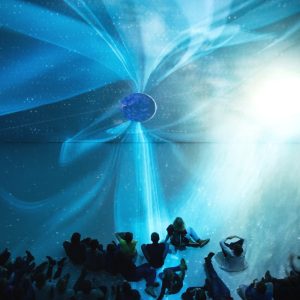