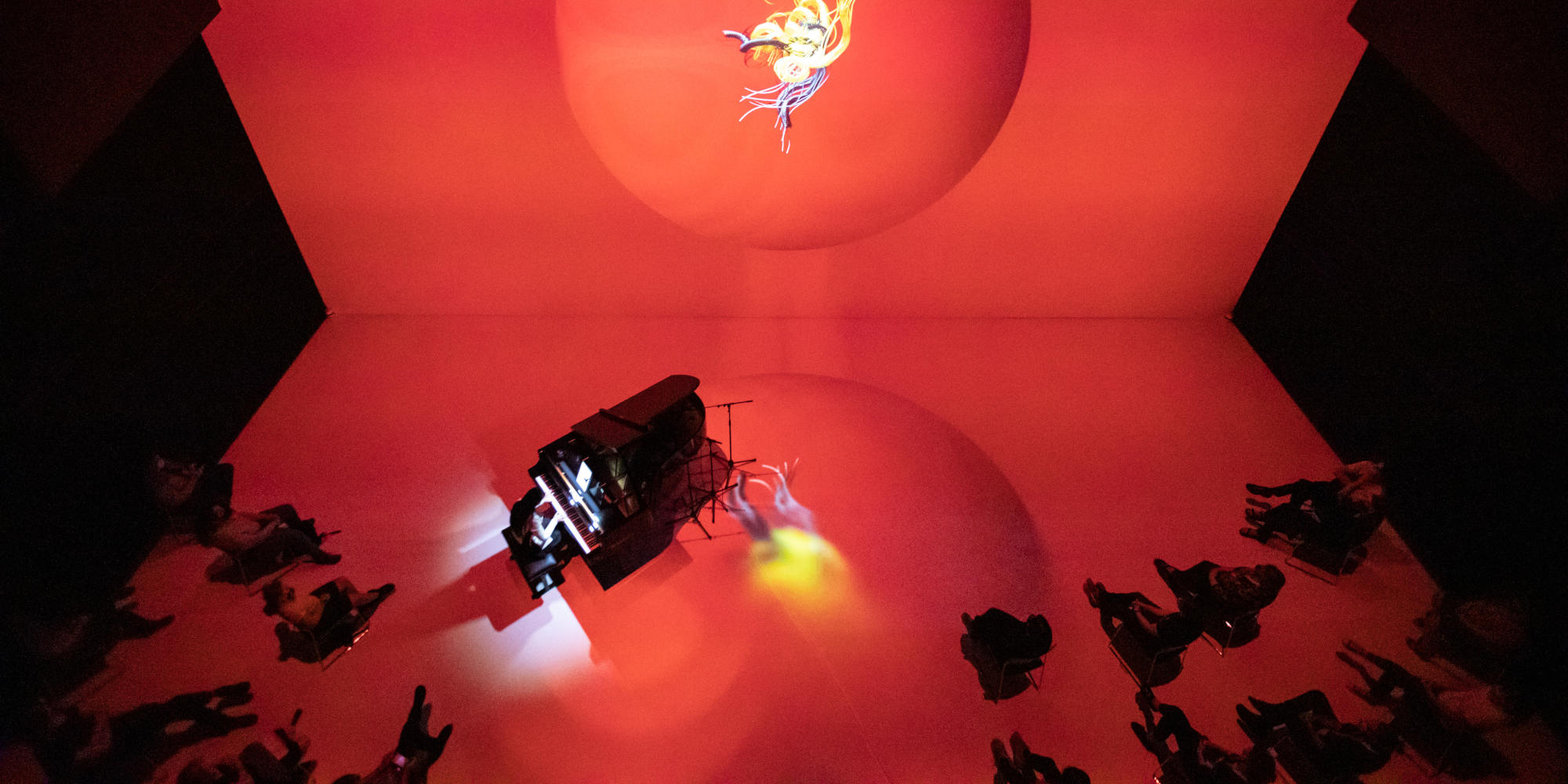 Philip Glass’ piano solo piece Passacaglia: After a tranquil opening, we break into boiling and purely pianistic passages of arpeggios and scales. Philip Glass’ trusted pianist Maki Namekawa (who has premiered several of his piano pieces) performs this work in its Austrian premiere.
Elliot Goldenthal lives in NY. He is an American composer of contemporary classical and film scores. He won the Academy Award for Best Original Score in 2002 for his work for the film Frida. Both pairs of his grandparents emigrated to the USA from Bucharest, Romania, and this is reflected in his works, including Gigue Diabolique.
Joep Beving, a successful Dutch composer says:
“I envisioned it as a journey into the cosmos, far away from the self where it had started. In search of what is fundamental in reality, beyond the immediate perceivable. The outward journey reflects the inward journey, much as the build-up of our inner workings reflects that of the macro-cosmos. Once that idea starts to down on you, the level of connection deepens beyond imagination.”
These works and their visualizations are the result of a long-time artistic collaboration between Maki Namekawa and Ars Electronica under artistic director Gerfried Stocker.

Visiting the Deep Space presentations is only possible with a pre-booked ticket. Tickets are available at the Ars Electronica Center’s infodesk and can only be booked for the respective time slot of the museum visit ticket.

Maki Namekawa is a leading figure among today’s pianists, bringing to audiences’ attention contemporary music by international composers. As a soloist and a chamber musician equally at home in classical and repertoire of our time, she performs regularly at international venues such as Suntory Hall Tokyo, Carnegie Hall and Lincoln Center New York, Davies Symphony Hall San Francisco, Barbican Center and Cadogan Hall London, Cité de la Musique Paris, Philharmonie de Paris, Concertgebouw Amsterdam, Salzburg Festival, Ars Electronica Festival, Musik-Biennale Berlin, Eclat Festival Stuttgart, Rheingau Music Festival and Piano-Festival Ruhr. Maki Namekawa records and performs frequently for major radio networks in Austria, Germany, the Netherlands, Switzerland, France and USA. Orchestra engagements include Royal Concertgebouw Orkest Amsterdam, Münchner Philharmoniker, Bamberger Symphoniker, Dresdner Philharmonie, Bruckner Orchester Linz, Sinfonieorchester Basel, Filharmonie Brno, American Composers Orchestra, and Seattle Symphony. In 2013, she performed the world premiere of the entire cycle of Philip Glass’ 20 etudes for piano solo at Perth International Arts Festival under the participation of Glass himself, followed by concerts around the world in the US, Mexico, Brazil, Ireland, Scotland, Iceland, Sweden, Finland, Denmark, Slovakia, Poland, Germany and Japan. A double-CD of the complete Glass etudes has been released in 2014 by Orange Mountain Music, reaching number 1 of the iTunes Classic charts and receiving high praise in the categories “Performance” and “Recording” by BBC Music Magazine. In September 2017 Maki Namekawa presented the whole cycle of Glass etudes for the first time in Austria at the Ars Electronica Festival as a project „Pianographique“ with real time visualization by Cori O‘Lan. In September 2018, Maki Namekawa released the piano version of Philip Glass’ soundtrack “MISHIMA – A Life in Four Chapters” that depicts the life and death of the japanese writer and political activist Yukio Mishima. The arrangement was especially crafted for her by Glass’ longterm musical director Michael Riesman and features her crystal-clear technique. The recording was awarded the prestigious “Pasticcio Prize” by ORF – Austrian National Radio Broadcast. In June 2019, her another recording Isang Yun | Sunrise Falling was awarded Pasticcio Prize again. In 2019 Philip Glass composed his first Piano Sonata especially for Maki Namekawa. She premiered the Sonata on July 4th, 2019 at Piano-Festival Ruhr in Germany in the presence of the composer. This Piano Sonata was commissioned by the Piano-Festival Ruhr, the Philharmonie de Paris and the Ars Electronica Festival. Together with her husband, the conductor Dennis Russell Davies, Maki Namekawa formed a piano duo in 2003 which regularly performs in leading venues in Europe and North America including the Piano Festival Ruhr, the Radialsystem in Berlin, the Salzburg Festival, the Ars Electronica Festival, the Lincoln Center Festival, the Morgan Library and “Roulette” in New York City, the Philips Collection in Washington, D.C., and the Other Minds Festival in California. Major works written for the Namekawa-Davies Duo include Philip Glass’ “Four Movements for Two Pianos”, “Chen Yi’s “China West Suite”, and Glass’ “Two Movements for Four Pianos“ (with Katia and Marielle Labèque) all commissioned by the Piano Festival Ruhr. In July 2017, Maki Namekawa, Dennis Russell Davies and Philip Glass received the Piano Festival Ruhr Award. Maki Namekawa studied piano at Kunitachi Conservatory in Tokyo with Mikio Ikezawa and Henriette Puig-Roget. In 1994 she won the Leonid Kreutzer Prize. In 1995 she continued her studies with Werner Genuit and Kaya Han at Musikhochschule Karlsruhe, where she completed her diploma as a soloist with special distinction. She went on to perfect her artistry in Classical-Romantic repertoire with Edith Picht-Axenfeld, in contemporary music with Pierre-Laurent Aimard at Musikhochschule Köln, György Kurtág, Stefan Litwin and Florent Boffard.