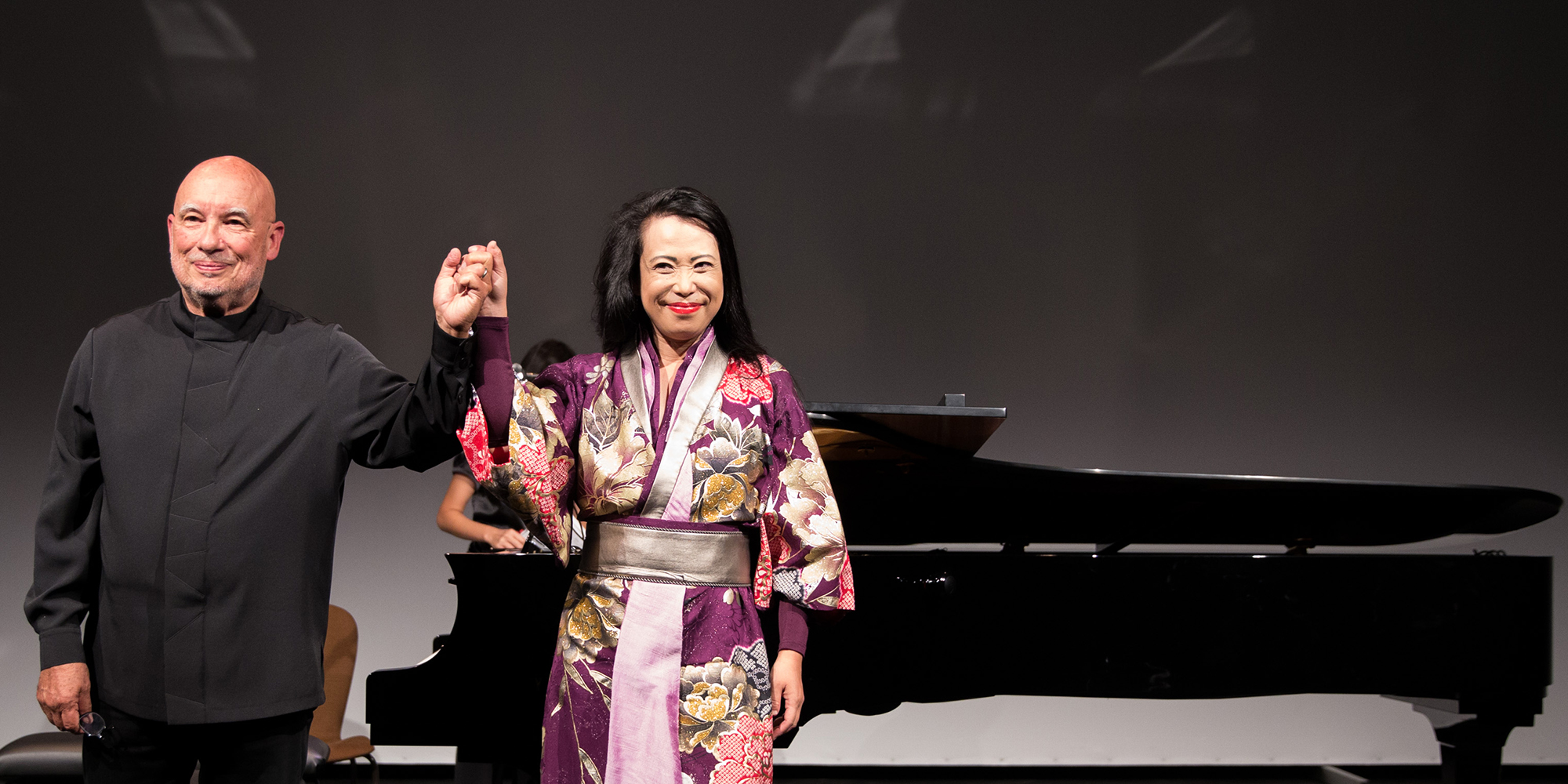 Pianographique is an ongoing artistic collaboration of the two pianists Maki Namekawa and Dennis Russell Davies with the digital-media artist Cori O‘Lan. 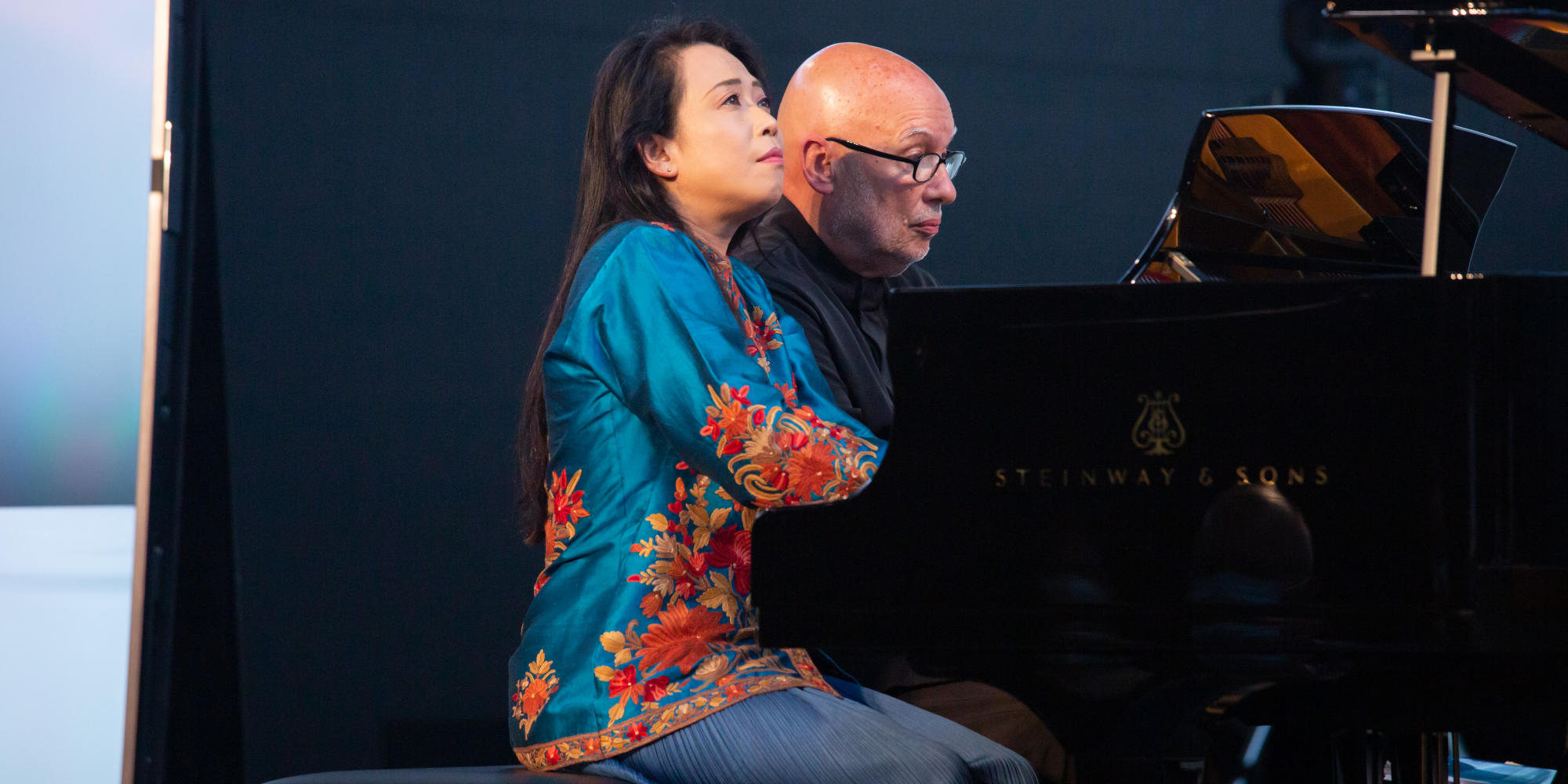 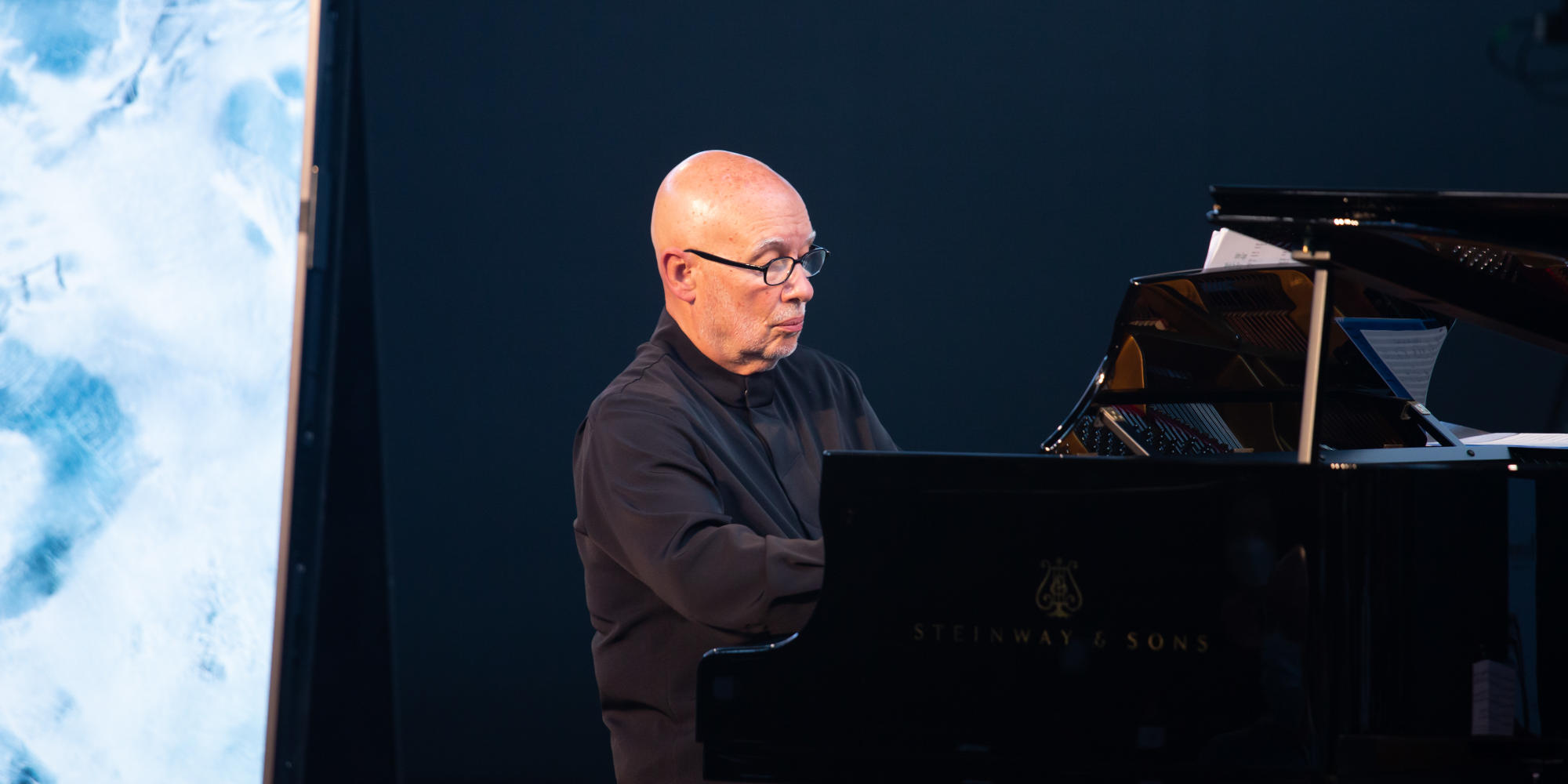 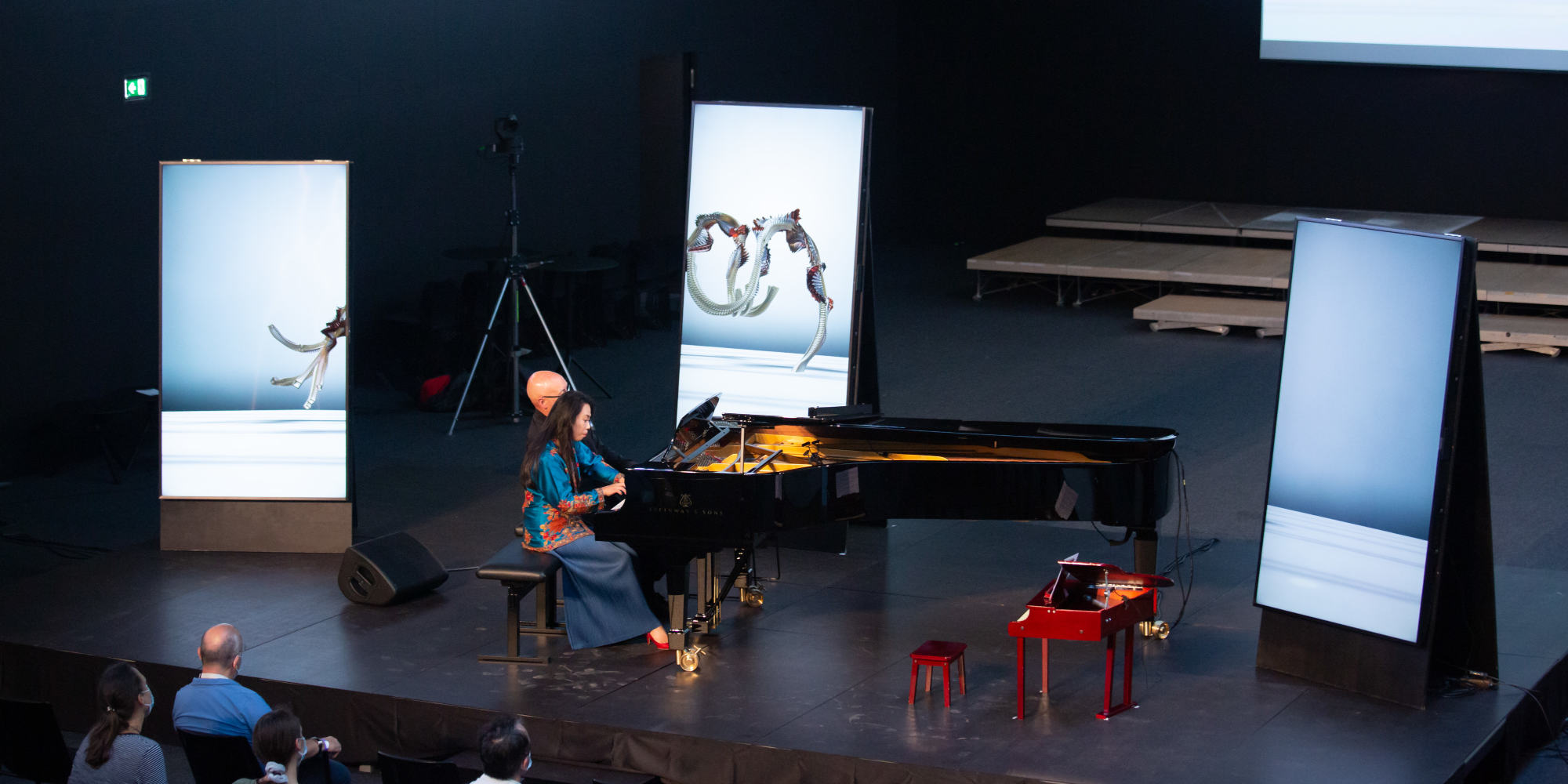 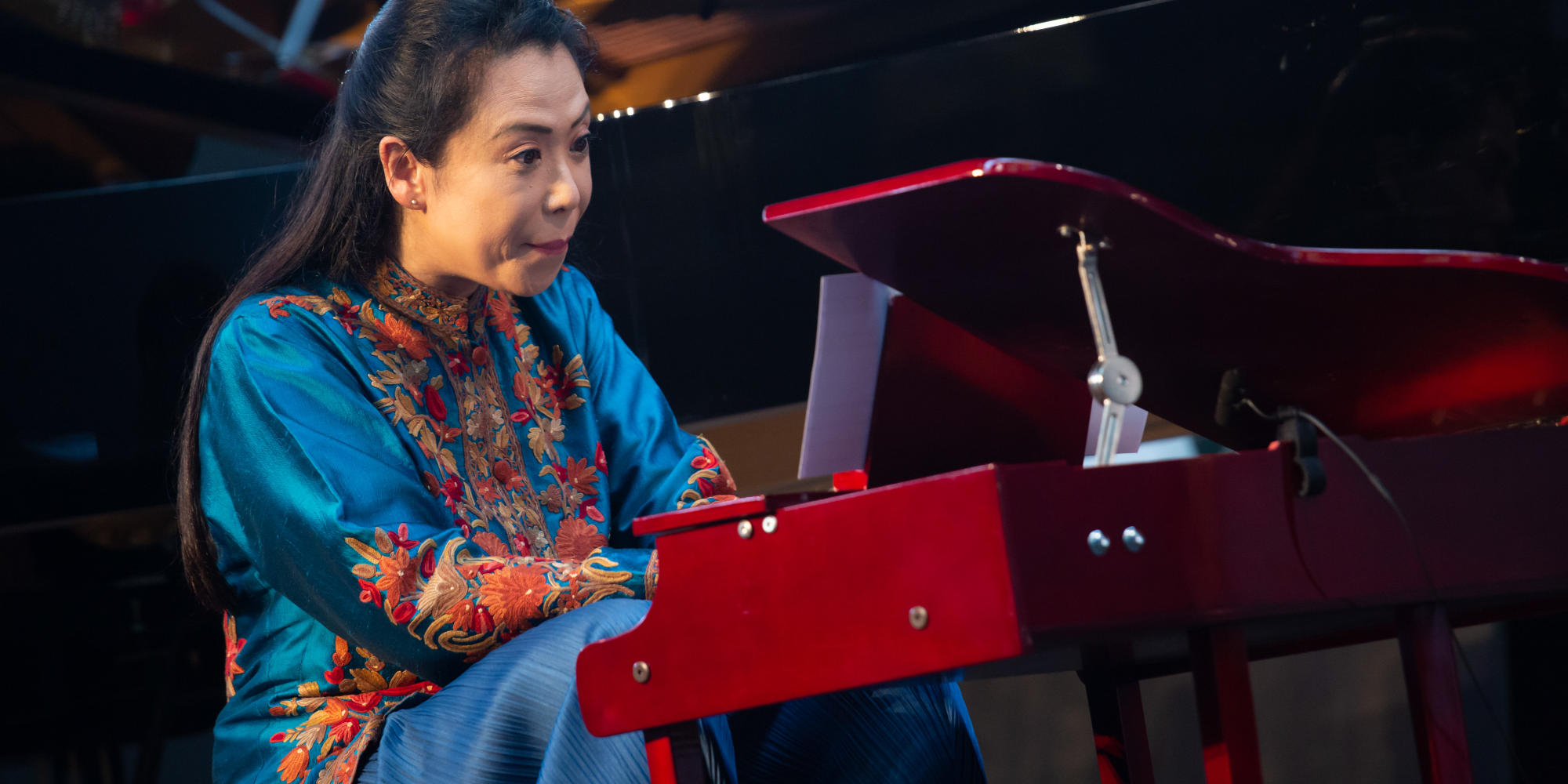 In their work, which they started in 2013, the artists aim to create an intimate connection and balance between the three decisive levels of experience in their live concerts: the piano-music itself, the physical presence and performance of the musicians and the visual accompaniment which is therefore not a pre-produced video or animation but generated in real-time based on comprehensive audio-analysis of the music as it is being played.

In a way, the special graphics software becomes a brush, which is placed in the hands of the musicians and is guided by their playing.

The trio is an often-seen guest at the Ars Electronica Festivals and has performed at numerous international locations such as New York, Tokyo, Abu Dhabi, Brussels and many more.

This year they are joined by Gregor Woschitz who has developed the real-time visualization for the 6 Macbeth Pieces by Kurt Schwertsik which have been chosen for this year’s program to celebrate the 85th birthday of this eminent Austrian Composer.

Pianographique will be presented at two locations of this year’s festival: The Ars Electronica Center’s Deep Space 8K with a solo recital by Maki Namekawa and on the festival’s main performance stage in the newly built Kepler Hall on the JKU campus with Dennis Russell Davies and Maki Namekawa performing together.

This event is co-funded by the European Commission’s DG CONNECT, in the framework of the Horizon 2020 programme of the European Union under the S+T+ARTS programme’s Regional STARTS Centers. 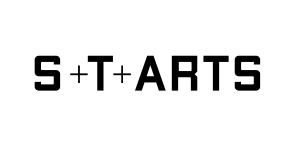 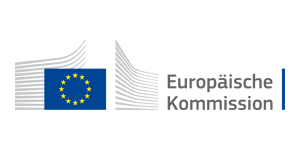 In 2013, she performed the world premiere of the entire cycle of Philip Glass’ 20 etudes for piano solo at Perth International Arts Festival under the participation of Glass himself, followed by concerts around the world in the US, Mexico, Brazil, Ireland, Scotland, Iceland, Sweden, Finland, Denmark, Slovakia, Poland, Germany and Japan. A double-CD of the complete Glass etudes has been released in 2014 by Orange Mountain Music, reaching number 1 of the iTunes Classic charts and receiving high praise in the categories “Performance” and “Recording” by BBC Music Magazine. In September 2017 Maki Namekawa presented the whole cycle of Glass etudes for the first time in Austria at Festival Ars Electronica.

Together with her husband, the conductor Dennis Russell Davies, Maki Namekawa formed a piano duo in 2003 which regularly performs in leading venues in Europe and North America including the Piano-Festival Ruhr, the Radialsystem in Berlin, the Salzburg Festival, the Ars Electronica Festival, the Lincoln Center Festival, the Morgan Library and “Roulette” in New York City, the Philips Collection in Washington, D.C., and the Other Minds Festival in California. Major works written for the Namekawa-Davies Duo include Philip Glass’ “Four Movements for Two Pianos”, “Chen Yi’s “China West Suite”, and Glass’ “Two Movements for Four Pianos“ (with Katia and Marielle Labèque) all commissioned by the Piano-Festival Ruhr. In July 2017, Maki Namekawa, Dennis Russell Davies and Philip Glass received the Piano-Festival Ruhr Award.

In September 2018, Maki Namekawa released the piano version of Philip Glass’ soundtrack “MISHIMA – A Life in Four Chapters” that depicts the life and death of the japanese writer and political activist Yukio Mishima. The arrangement was especially crafted for her by Glass’ longterm musical director Michael Riesman and features her crystal-clear technique. The recording was awarded the prestigious “Pasticcio Preis” by Austrian national radio.

In 2019 Philip Glass composed his first Piano Sonata especially for Maki Namekawa. She premiered the Sonata on July 4th, 2019 at Piano-Festival Ruhr in Germany in the presence of the composer.

Maki Namekawa studied piano at Kunitachi Conservatory in Tokyo with Mikio Ikezawa and Henriette Puig-Roget. In 1994 she won the Leonid Kreutzer Prize. In 1995 she continued her studies with Werner Genuit and Kaya Han at Musikhochschule Karlsruhe, where she completed her diploma as a soloist with special distinction. She went on to perfect her artistry in Classical-Romantic repertoire with Edith Picht-Axenfeld, in contemporary music with Pierre-Laurent Aimard at Musikhochschule Köln, György Kurtág, Stefan Litwin and Florent Boffard.

Dennis Russell Davies was born in Toledo (Ohio) and studied piano and conducting at the Juilliard School, New York. His activities as an opera and concert conductor, and as a pianist and chamber musician, are characterized by an extensive repertoire stretching from the Baroque to the latest music of our time. Widely considered to be one of the most innovative and adventurous conductors in the classical music world, Dennis Russell Davies has successfully challenged and inspired audiences on both sides of the Atlantic. He is noted for his exciting and well-structured concert programmes and for close working relationships with many composers, among them Luciano Berio, William Bolcom, John Cage, Manfred Trojahn, Philip Glass, Heinz Winbeck, Laurie Anderson, Philippe Manoury, Aaron Copland, Hans Werner Henze, Michael Nyman and Kurt Schwertsik.

As a guest, Dennis Russell Davies has conducted such renowned orchestras as those in Cleveland, Philadelphia, Chicago, San Francisco, Boston and the New York Philharmonic, as well as Yomiuri Nippon Symphony.

During his tenure as GMD in Linz, the new Linz Opera House was inaugurated in April 2013, at which occasion Dennis Russell Davies conducted the world premiere of Philip Glass’s opera “The Lost” as well as Strauss’ ”Der Rosenkavalier”. In addition, he conducted new productions of the whole “Ring des Nibelungen”, “Pelléas et Mélisande”, “Falstaff”, “Salome”, the European premiere of “McTeague” as well as world premieres by Moritz Eggert and Michael Obst at the new “Musiktheater”.

Davies’ work also had a crucial and lasting effect on the concert sector of Bruckner Orchester Linz by reaching out to modernity and new audiences, and frequent touring activity while still working on their core repertoire, e.g. the recording of all symphonies of Bruckner in every version.

In September 2018, Dennis Russell Davies took up his position as Artistic director and Chief Conductor of Filharmonie Brno.

Dennis Russell Davies is a Fellow of the American Academy of Arts and Sciences. In December 2014, the title “Commandeur des Arts et Lettres” was bestowed on Dennis Russell Davies by the French government, in 2017, he received the “Österreichische Ehrenkreuz für Wissenschaft und Kunst 1. Klasse” by the Austrian government.