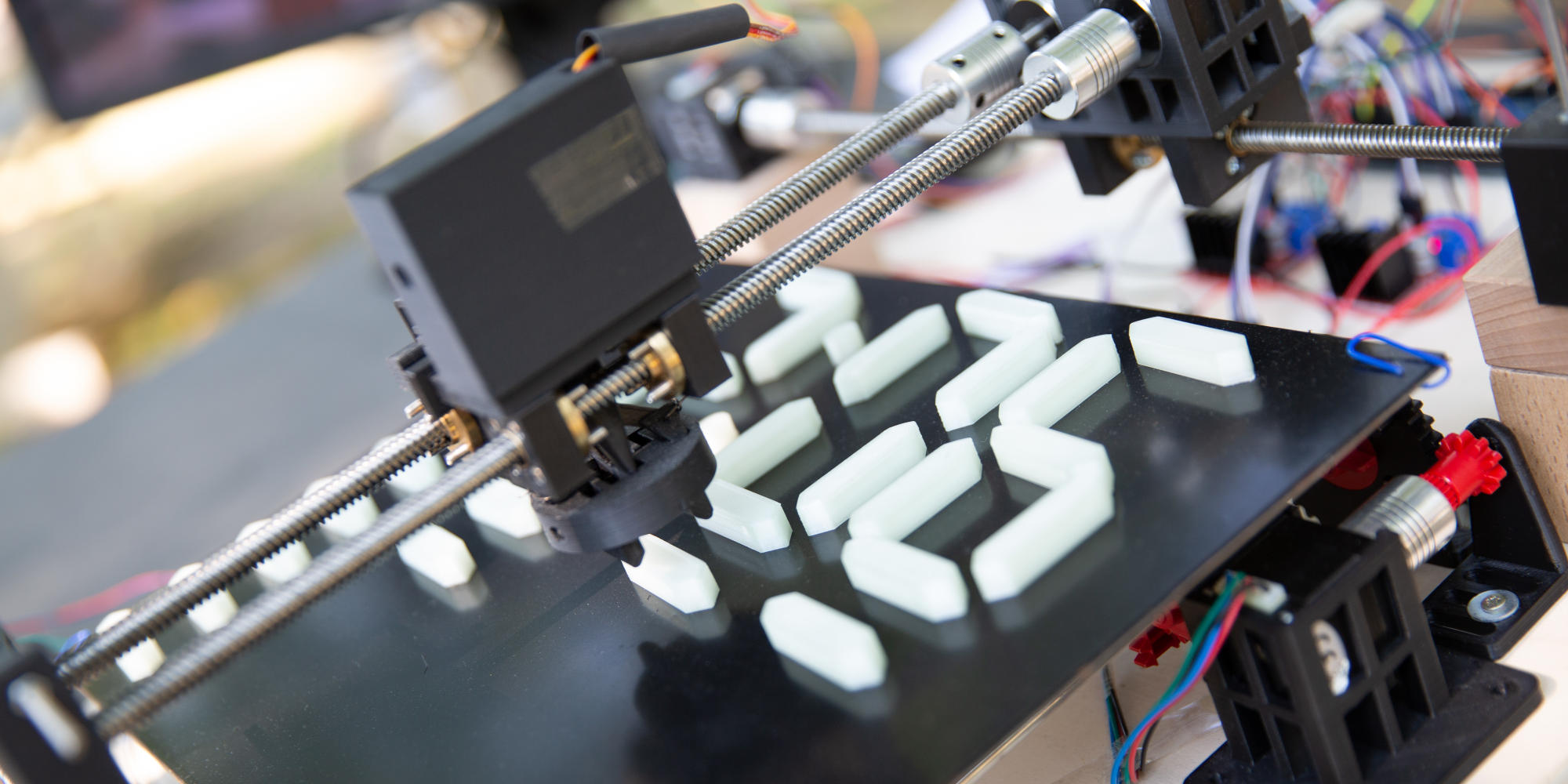 Robdilo’clock is a robot I designed, built, and programmed myself that shows the time in a very special way. Using a gripper, it grasps individual segments and positions them in such a way that they display the time in digital numerals. It is thus a robot clock that in an analog manner (with motors) shows the time digitally, which gives it its name: “ROBot – DIgital – anaLOg – CLOCK.”

The gripper is moved by motor-operated threaded rods in two axes over a black-painted plexiglass plate. In order to lift up and deposit the segments, the entire plate is moved up and down. The system is controlled by an Arduino Mega 2560 microcontroller board. The up-and-down movement is accomplished by two mini stepper motors that rotate two rods. Two fischertechnik gear wheels fastened to the rods mesh with toothed racks mounted on the plate and thus lift or lower the plate. A servomotor opens and closes the gripper to grasp and release the segments. Each of these segments has two small magnets fixed to the underside with which they adhere to the metal plate located directly beneath the plexiglass. An elaborately constructed mechanism enables the gripper to rotate. I modelled the motor mountings and the complete carriage with the gripper head in 3D using the Onshape CAD software and printed them out with a 3D printer.

Time regulates our daily life. It can also convey messages. For the short film I made to show how Robdilo’clock works, I purposely chose the minutes shortly before 12 o’clock. This time span has a symbolic meaning as well: it can serve as a reminder that some problems of our time must be solved quickly, before it is too late.

I am now 14 years old. When I am twice as old, the world will have changed a great deal. Robdilo’clock determines our time every day. The future will show to what extent robots will increasingly determine our daily life.

Benjamin Aster (b. 2005) is 14 years old and attends Akademisches Gymnasium Salzburg. In his free time, he enjoys programming—especially with Arduino and Processing—and creating mechatronic projects, for which he has been awarded prizes. He designs and models parts for the 3D printer with which he builds and programs machines and robots. He is also very interested in math and likes programming mathematical models. He was the 2017 national champion in the “Känguru” mathematics competition and in 2019 the federal state champion. Singing is another of his hobbies: he is a member of a children’s choir and has performed as a soloist at the Salzburg Easter Festival.

What begins with a catchy play on words ultimately leads to a dizzying philosophy about time. Robdilo’clock is described by its creator as a “a robot clock that in an analog manner (with motors) shows the time digitally, which gives it its name: ROBot – DIgital – anaLOg – CLOCK.” Moreover, the “o’clock” at the end represents another pun. On a black-painted plexiglass plate lie 28 segments that, similar to an LCD clock, show the time. In order to display the next hour or minute, a gripper grasps the relevant segments and repositions them accordingly. One follows the mechanical process with astonishment as it arranges the individual elements, which then in their entirety reveal the new time. Every procedure takes exactly one minute, of course. In this interval, the “old” time is dismantled and the “new” one is assembled. And the entire process is “transparent”: all elements lie in front of us in plain view—gear wheels, threaded rods, the plexiglass plate, etc. The mechanics that show us the time always require the same amount of time to do this. This means nothing less than that we can watch as a phenomenon both creates and defines itself. With this, Benjamin Aster has accomplished a great feat: he has created his own distinctive expression for the indescribable.