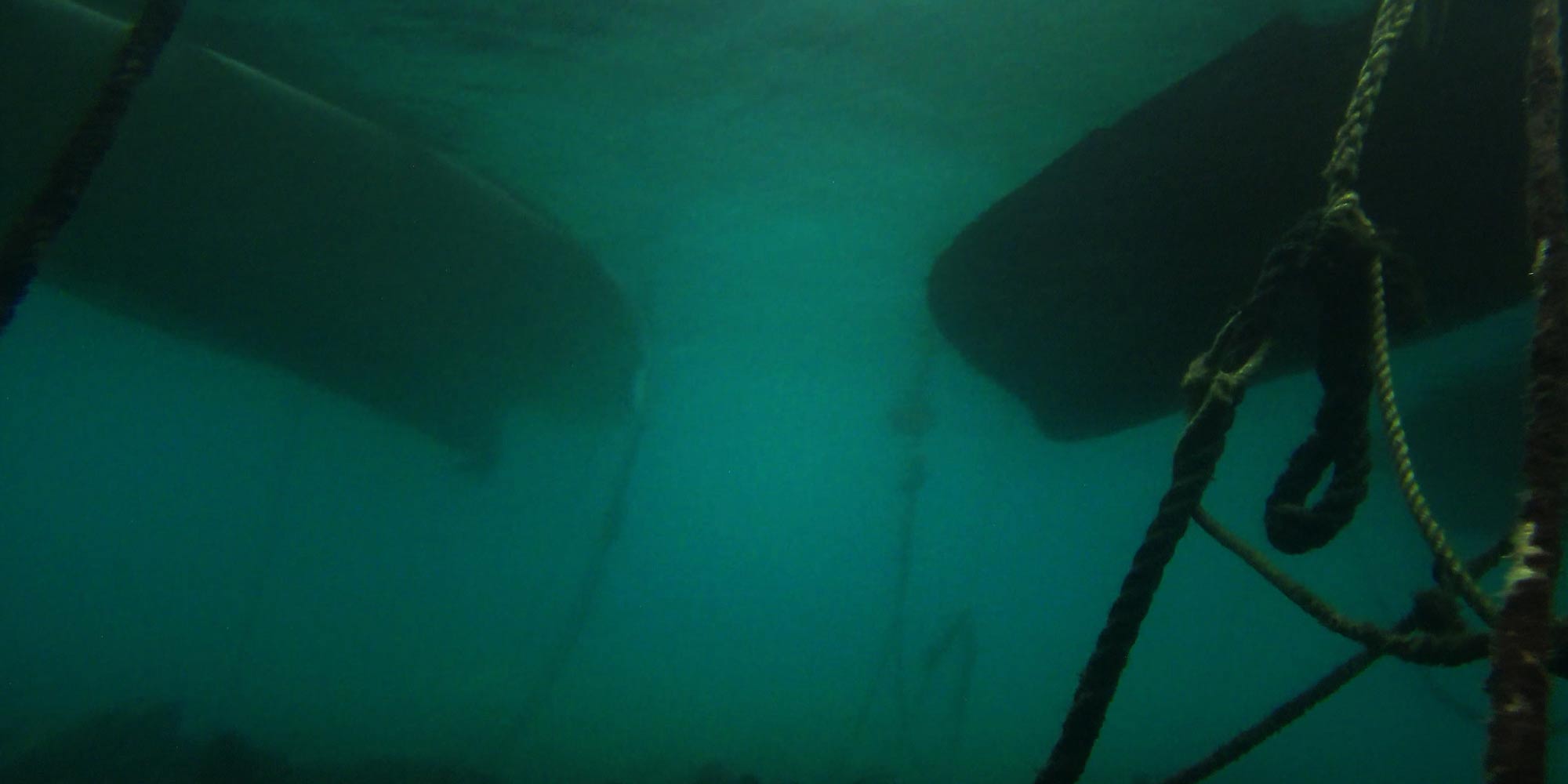 The Adriatic Garden will host a wide array of activities: exhibitions, installations, panel discussions, workshops, and much more, while enabling audiences to immerse themselves in the underwater world of the sea. Art, science and citizen science coalesce within the framework of Adriatic Garden | aqua_forensic 2.0, opening up a wider discussion about our solidarity and empathy with waters beyond human perception. Within the project, we would like to give special attention to the values of care, compassion, environmental justice, action-taking and cooperation with the Adriatic sea and its creatures.

Audiences are invited to open their ears and listen to the vast array of sounds, among them the sound mapping of the Korčula Island, an artist’s reflection on the tides, the circulation of the water body, and the melodies of diving in submerged caves of the Quarner bay area. Some of the tales deal with underwater noise pollution and showcase the human sonic impact on the underwater habitat and marine life, as well as the presence of morphologies hidden in the palimpsests of memory of the places once heavily exploited in the name of urbanization, tourism and industrial progress that marks the Adriatic Sea.

Almost silent and barely moving travellers. Cleaning waters. Wiping out sediments and organic remains. When they move over the seabed they do it like butoh dancers, slowly moving their tube feet, not losing balance no matter the surface. Softly and gently they touch the surface making almost no noise like their predators. They walk, they stop, they travel.

The Sea Urchin Underwater Walk composition is a result of many hours of recordings using nylon string nets laid under sea urchins that were picked up and amplified by different piezo preamps. Underwater recordings were further condensed in the studio while removing many bumps and unwanted sounds created by waves and fish.

The field recording and the recording with a hydrophone were created in the Srebrena bay of the Vis Island in 2020. The artist wished to document the under and above water sounds of a particular spot at the precisely same time. He thus connects two seemingly distant worlds. And then, while spending time alone in his room, left with only memories, he transforms his memories into sounds, and the line between the past and present becomes obscured. All becomes one and exists while the composition lasts.

Ivo Vičić
Undersea (ongoing since 2011)
Recorded in the Quarner bay area and the Port of Rijeka, Croatia

The recordings were made in the Adriatic Sea both underwater and above water, mostly in the Quarner bay area and the Port of Rijeka. The precise locations are a cave in a secret location near Rijeka, Molo longo and other locations in the Port of Rijeka; the now destroyed beach at Costabella, Rijeka; the Preluk bay near Opatija; a beach near Opatija and Kostrena near Rijeka.

List of the audio material:
01 Diving in a Submerged Cave; 02 Waterbrake/Breakwater;
03 Sea Organ; 04 Under the Ship (a ship in harbour, the restless sea-Bora wind);
05 Harbour – Underwater Soundscape (sounds of the underwater traffic);
06 Under the Waves – On the Beach; 07 Small Port on Scirocco Wind / Waves Underwater;
08 Diver in the Shallow Sea; 09 Long Beach – Underwater / On water Recording

In July 2014, Leah Barclay was an artist in residence at the Siva Zona Gallery on the Korčula Island in Croatia as part of the Pacific Shortcuts project. The Pacific Shortcuts featured Sound Mirrors by Leah Barclay, an immersive sonic environment that responds to significant rivers across the world. Throughout 2009 to 2012, Leah Barclay travelled through Australia, India, Korea, China, Hong Kong and Brazil capturing the sound of rivers and their surrounding communities.

The featured work is an ephemeral experience that slides through vivid landscapes and rich cultural traditions. Ocean Listening is an interdisciplinary research project that explores the creative possibilities of marine bioacoustics and the potential for sound as a tool for engagement and awareness around ocean health. The project sits within a portfolio of acoustic ecology research led by Leah Barclay at the Queensland Conservatorium Research Centre at Griffith University in Australia. The featured work is an extension of the Ocean Listening project here: leahbarclay.com/portfolio_page/ocean-listening/

The audio compositions of the subaquatic soundscape encourage us to reflect upon the anthropogenic sonic impact on the underwater habitat and marine life, as well as illuminate awareness and underscore the importance of maintaining safe sound environments for animals living in the world’s oceans, seas, lakes and rivers. The Aquatocene / The subaquatic quest for serenity investigates the phenomenon of underwater noise pollution created by humankind in the seas and oceans. The sound compositions are a re-mix between the bioacoustics of marine life (shrimps, fish, sea urchins etc.), the aquatic acoustics and the presence of human generated noise in the world’s oceans and seas.

The featured series of works is focusing on the underwater sound situations of the Adriatic Sea in three localities, namely Koper, Korčula, Dubrovnik, which are documented in three compositions recorded between 2017 – 2020.

Invisible sonic chambers of the microenvironments that the artist reveals in the work succubus mnemonics are the creative imprint of infrapsychic symbolism that emerges from subtle morphologies hidden in the palimpsests of memory of the places once heavily exploited in the name of urbanization and industrial progress, but now recovered and taken over by nature. Those are the places that suffered environmental devastation, such as abandoned quarries, open large-scale stone cutting sites, stone trade docking sites, which were for many centuries locale for the trade reaching as far as the American continent. Next to the inconceivable scale of home building, the raw material of those is also engraved in numerous historical constructions, such as cathedrals, churches, town halls, and public squares, all around Europe and further.

Brane Zorman is a composer, sound and radio artist, sound manipulator and producer, based in Ljubljana, Slovenia. He has composed numerous theatre, dance, internet, newmedia events and dance performance sound works. His work examines and explores the possibilities of processing, presence, perception, understanding, positioning, manipulating and reinterpreting sounds and space(s) with special focus on uncovering the unseen, unheard and hidden nature and artificial sounds.

Saša Spačal is a postmedia artist working at the intersection of living systems research, contemporary and sound art. Her artistic research focuses on entanglements of the environment-culture continuum. By developing interfaces and relations with soil agents, she addresses the posthuman condition that involves mechanical, digital and organic logic within biopolitics and necropolitics of our times.

Roberto Vodanović Čopor is a multimedia artist. In his music, he often combines the sounds of nature or the sounds of cities, and uses sounds created from everyday objects as a background. He has published three collections of poetry: Insomnia, Almost a Little Book and Walls are barking. He is also an author or co-author of several performances that he often performs as part of his concerts. He has exhibited his artwork on several exhibitions.

Leah Barclay is a sound artist, designer and researcher who works at the intersection of art, science and technology. Leah’s research and creative work over the last decade has investigated innovative approaches to recording and disseminating the soundscapes of terrestrial and aquatic ecosystems to inform conservation, scientific research and public engagement. Her work explores ways we can use creativity, new technologies and emerging science to reconnect communities to the environment and inspire climate action.

The work of the artist Robertina Šebjanič revolves around the biological, chemical, political and cultural realities of aquatic environments and explores humankind’s impact on other species and on the rights of non-human entities, while calling for strategies emphatic towards other species to be adopted. In her analysis of the theoretical framework of the Anthropocene, the artist uses the term ‘aquatocene’ and ‘aquaforming’ to refer to humans’ impact on aquatic environments.

Manja Ristić was born in Belgrade 1979. She is a violinist, sound artist, curator, and researcher mostly active in the fields of instrumental improvisation, soundscape composition & experimental sound-related arts. She graduated at the Belgrade Music Academy, then gained PGDip at the Royal College of Music, London. Her work blends an exploration of intuitive composition and sonic ecologies.