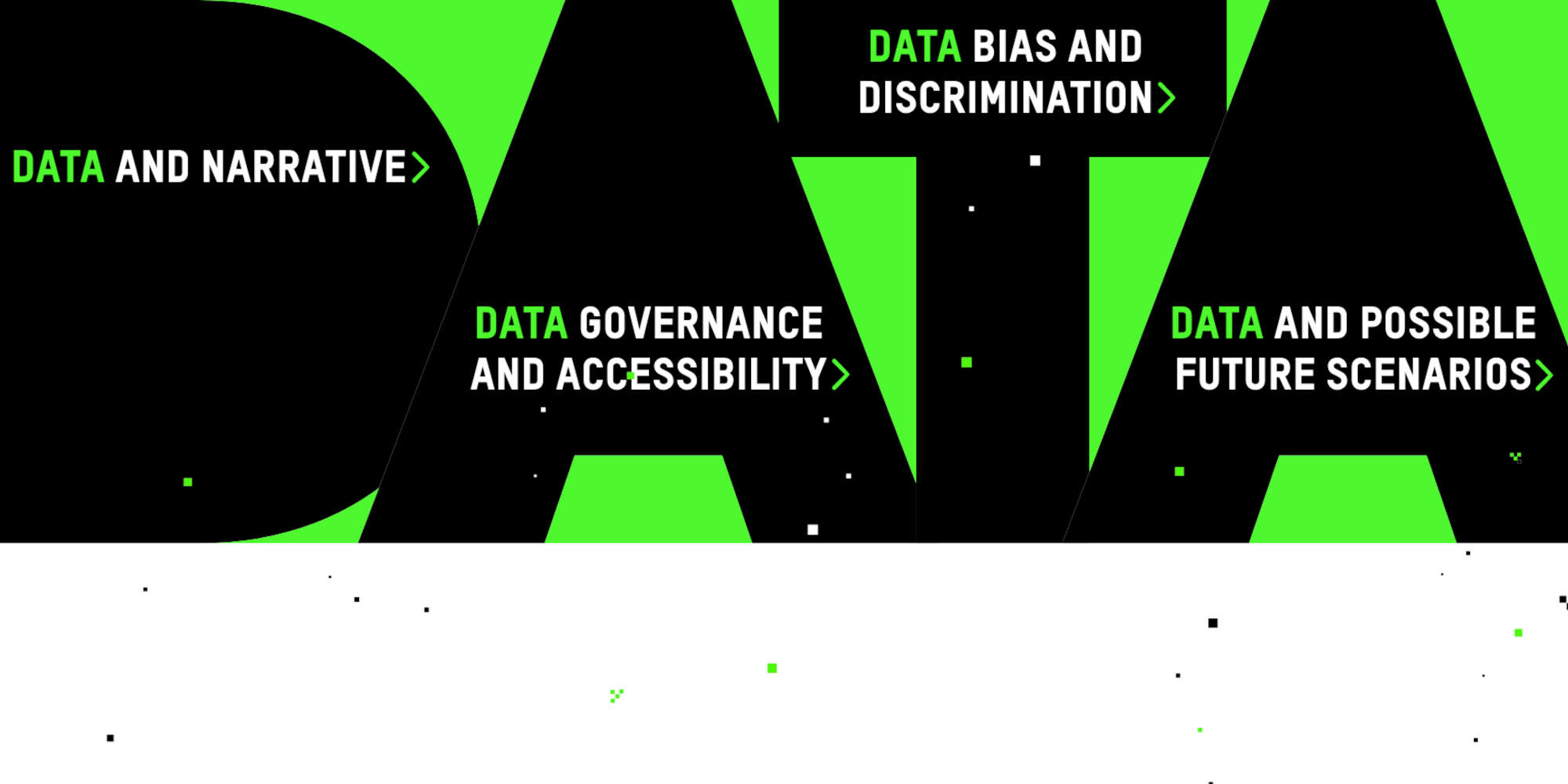 Click on the website link above to hear more the curated list of experts we engaged to give talks and reflect on 4 main themes relating to data:

1 – Data and narrative
In what ways do data and narrative interact? Data does not stand alone; data works in relation to other data and to other data sets, through many different sorts of relations and with respect to processing systems; databases, computers, programs and algorithms. Data also works in relation to people. The issue of how things become data or are taken to be data is in itself complex. Data is of diverse types; not just in the forms of numbers and transcripts, but also in the form of feelings and experiences.

2 – Data governance & accessibility
Digital transformation in urban societies imposes questions on digital inclusion, owner and data sovereignty. Discussing civic engagement and accessibility of data in the current uprising of digital technologies in everyday life is crucial for a better understanding of data governance. Who has access to our data on a local and global scale? Can we access our own data, the data that is collected from us?

3 – Data Bias and discrimination
Questioning and investigating the notion of data & algorithmic neutrality. Are [the] data neutral or infected with prejudices and biases? Is the Algorithm biased? Are data biased? Or is the risk of bias elsewhere? Where? With this focus point, we want to question the automation of algorithm and Data and how it reflects on historical and current forms of biases and inequalities in society.

4 – Data and possible future scenarios
Through art and creative work, we have always imagined alternative scenarios as a way of understanding our own world in new ways. A critical role of fiction is to provide a counter-narrative to the prevailing narratives, for instance to those around emerging technologies, to go beyond the recurrent discourse of the future as a destination or something to be strived for or pursue, and to use fiction as a medium to aid imaginative thought and creative speculation, with an interest in the double bind of fiction and real when it applies to technology, the online and offline, the virtual, the cloud, the network, the materiality and immateriality of data in relation to our contemporary society and local reality.

Alya AlQarni is an interdisciplinary research-based designer, artist. With her interest in the modern shapes of social and geopolitical structures, her latest works discussed the representation of the East from the Western perspective and the creation of otherness. She holds an MFA degree in Design and Technology from Parsons school of design. Currently, a lecturer at Imam Abdulrahman bin FaisalUniversity, College of Design.
Sara Khalid is a Multidisciplinary Designer; who uses her Arabic-spirited and research-driven processes to develop her set of works Hyperlink – الخيط الناظم. As she carries her poetic mind through design, she’s plotting analogies of Arabic Language and Computer Languages in Digital Rhetorics – البلاغة الرقميّة.
Areej Mawasi is a learning scientist and digital media researcher. She is a postdoctoral research associate in learning sciences, critical technology, and equity at University of Colorado Boulder. Areej earned her PhD degree in Learning, Literacies, and Technologies in Mary Lou Fulton Teachers College at Arizona State University in 2021. She completed her master’s degree in educational technology at ASU in 2017. She was a Fulbright scholar in the US during her graduate studies. Areej studies and writes about learning, technology, equity, and STEM ethics for both academic and public audiences. In her interdisciplinary work, Areejcombines social sciences and applied design-based methods to design and study learning environments mediated by technologies in a participatory manner with learners, educators, and communities.
Evgeny Morozov is an American writer, researcher, and intellectual from Belarus who studies political and social implications of technology. He was named one of the 28 most influential Europeans by Politico in 2018. He is the author of the Net Delusion: The Dark Side of the Internet Freedom and To Save Everything, Click Here: The Folly of Technological Solutionism. His articles have been published in the New York Times, New Yorker, Financial Times, Economist, Wall Street Journal, London Review of Books, and many other publications. Morozov has been a visiting scholar at Stanford University, a Schwartz fellow at the New America Foundation, and contributing editor of and blogger for Foreign Policy magazine. His previous positions include Yahoo! Fellow at Georgetown University’s Walsh School of Foreign Service, a fellow at the Open Society Institute, director of new media at the NGO Transitions Online, and columnist for the Russian newspaper Akzia.
Miriam Rasch in an essayist and works at the Institute for Network Culture of Amsterdam University of Applied Sciences. She studied literature and philosophy, and writes essays and reviews for De Gids, De Groene Amsterdammer, Revisor and the American deep web magazine The Torist, among others. In 2015, she won the Jan Hanlo Essay Prize Klein. Her collection of essays Swimming in the Ocean, Messages from a post-digital world [2017] was nominated for the Socrates Cup 2018. Her book Friction was published in May 2020, about the ethical dilemmas surrounding the ever-increasing influence of data. In her book, Rasch argues against the belief that everything that exists can be translated in terms of data. Rasch contrasts this ‘dataism’ with the concept of friction, to describe the need for distance between humans and the world in order to be able to think.
Morehshin Allahyari (Persian: موره شین اللهیاری‎; born 1985) is an Iranian-Kurdish media artist, activist, and writer based in Brooklyn, New York. She uses computer modeling, 3D scanning, and digital fabrication techniques to explore the intersection of art and activism. Inspired by concepts of collective archiving and cultural contradiction, Allahyari’s 3D-printed sculptures and videos challenge social and gender norms. Her work has been part of numerous exhibitions, festivals, and workshops at venues throughout the world, including the New Museum, MoMa, Centre Pompidou, Venice Biennale di Archittectura, and Museum für Angewandte Kunst among many others. She is the recipient of the United States Artist Fellowship (2021), The Joan Mitchell Foundation Painters & Sculptors Grant (2019), The Sundance Institute New Frontier International Fellowship, and the leading global thinkers of 2016 award by Foreign Policy magazine.
Nagla Rizk’s teaching, research and advocacy focus on advancing the critical role of knowledge and technology as drivers for human development. Framed within the “access to knowledge” paradigm, her research interests lie in the economics of knowledge, technology and inclusive development. Rizk studies digital platforms, entrepreneurship, innovation, data, intellectual property and business models in the digital economy, particularly in the age of the Fourth Industrial Revolution, with focus on their role in promoting development in Egypt, the Arab world and Africa. Her research is multidisciplinary in nature and aims at offering academic contribution to an area of interest that is novel to Egypt and the region, while contributing to global scholarship and actively presenting the voice of developing countries in global conversations. In her work as founding director of the Access to Knowledge for Development Center (A2K4D), She is engaged with regional and international partners in policy- oriented research that focuses on the developmental perspective of knowledge in general and knowledge governance in particular. Rizk’s research provides the academic base for her advocacy work on promoting access to knowledge, freedom of information and open source technologies in Egypt.