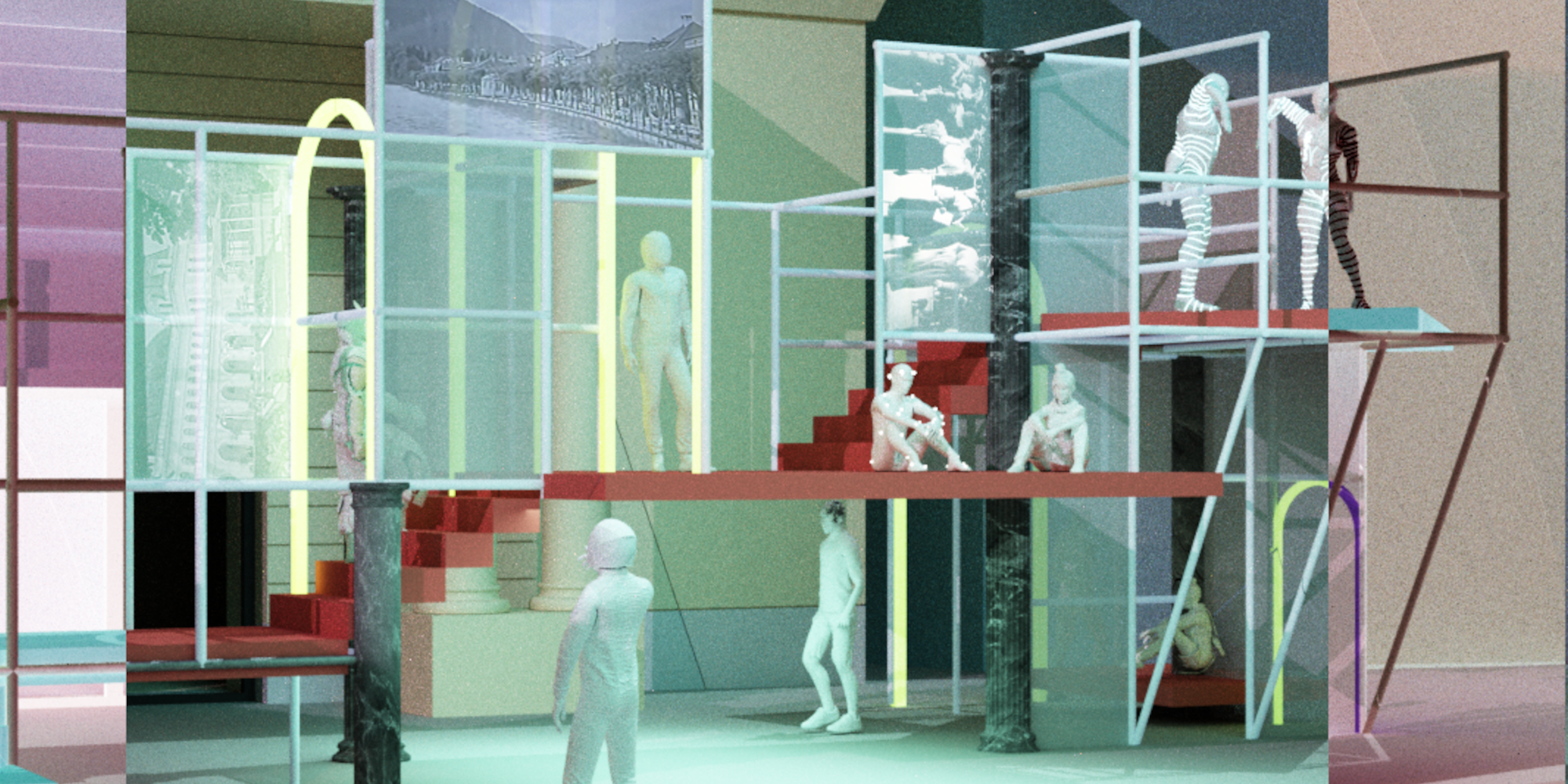 The Lehar Theater in Bad Ischl has changed and redefined its identity several times over the years. Beginning as a traditional stage theater, it was later upgraded and converted to a movie theater or cinema. The most recent change was not so much an identity adjustment as a loss of identity, as the Lehar Theater has been closed to the public for two years pending total renovation. The theater and its associated forecourt were important components of the region’s arts and cultural scene. The closure had a significant impact on the cultural value of the place and the Corona pandemic did not improve this fact at all.

The sculpture „Wechselkulisse“ presented in front of the theatre is inspired by the idea of renovation and the associated „wrapping“ of buildings with scaffolding and protective sheeting. Not only the Lehar Theater is to be renovated, but also the entire cultural influence of Bad Ischl on Austria and Europe.

In the Mozilla hub, the Sculpture becomes a gateway into the exhibition space inside the Lehar theatre. It is intended to become a new temporary landmark or symbol of shared virtual social exchange and to culturally revitalize the plaza.

The theatre comprises works of students from the master’s semester studio (University of Innsbruck) & the artist in residence at AUF! AUF! Residency.

Anirudhan Iyengar: Anirudhan Iyengar is an Architect, experimental interaction designer + educator based in Austria. Currently freelancing + collaborating across architecture, installation + design projects + teaching and pursuing Ph.D. at the University of Innsbruck, Studio2, Institut für Gestaltung. Originally from Mumbai, India to London The Bartlett School of Architecture, UCL to Innsbruck, Austria, he is enthusiastic about experimenting with space and technology to create more possibilities. His interest lies in speculative & interaction design, human-machine collaboration & virtual reality & architecture. His work has been exhibited in London, Moscow, Beijing, Mumbai, Delhi & Innsbruck. Currently pursuing his Ph.D. in Architecture and Perception with a focus on Embodied Cognition in Immersive Environments.
Clemens Plank: Clemens Plank is an Architect, researcher, and senior lecturer at the University of Innsbruck (Faculty of Architecture), where he oversees the design studio and teaches architecture design. His academic work draws heavily on neuroscientific research and pursues a contemporary analysis of the phenomenological experience of architecture. He is also a practicing architect and a co-founder of Imgang Architect.
Michael Wagner: Michael Wagner is an architect and stage and experience designer, as well as a sound, lighting, and video technician. An architect with substantial experience in the stage and event industry. Michael combines his two fields of work in his research. His specific focus lies on rethinking conventional ways of structuring the spatial, visual, and auditory dimensions of events within a wider frame of spatial design and event technology, as well as audience interaction. To critically and creatively address respective contemporary issues, Michael combines architecture, stage design, and stage technology to create unique, interactive, and immersive content and experiences. Michael currently manages the AV department at UCL HereEast and teaches at the Bartlett School of Architecture’s Interactive Architecture Lab, as well as on the MEng program. He also works as a freelance designer and curator for stage-design companies and is involved with various event projects both in the UK and in Switzerland. Michael holds a Bachelor’s degree in Architecture from HTW Chur in Switzerland and a MArch in Design for Performance and Interaction from University College London.