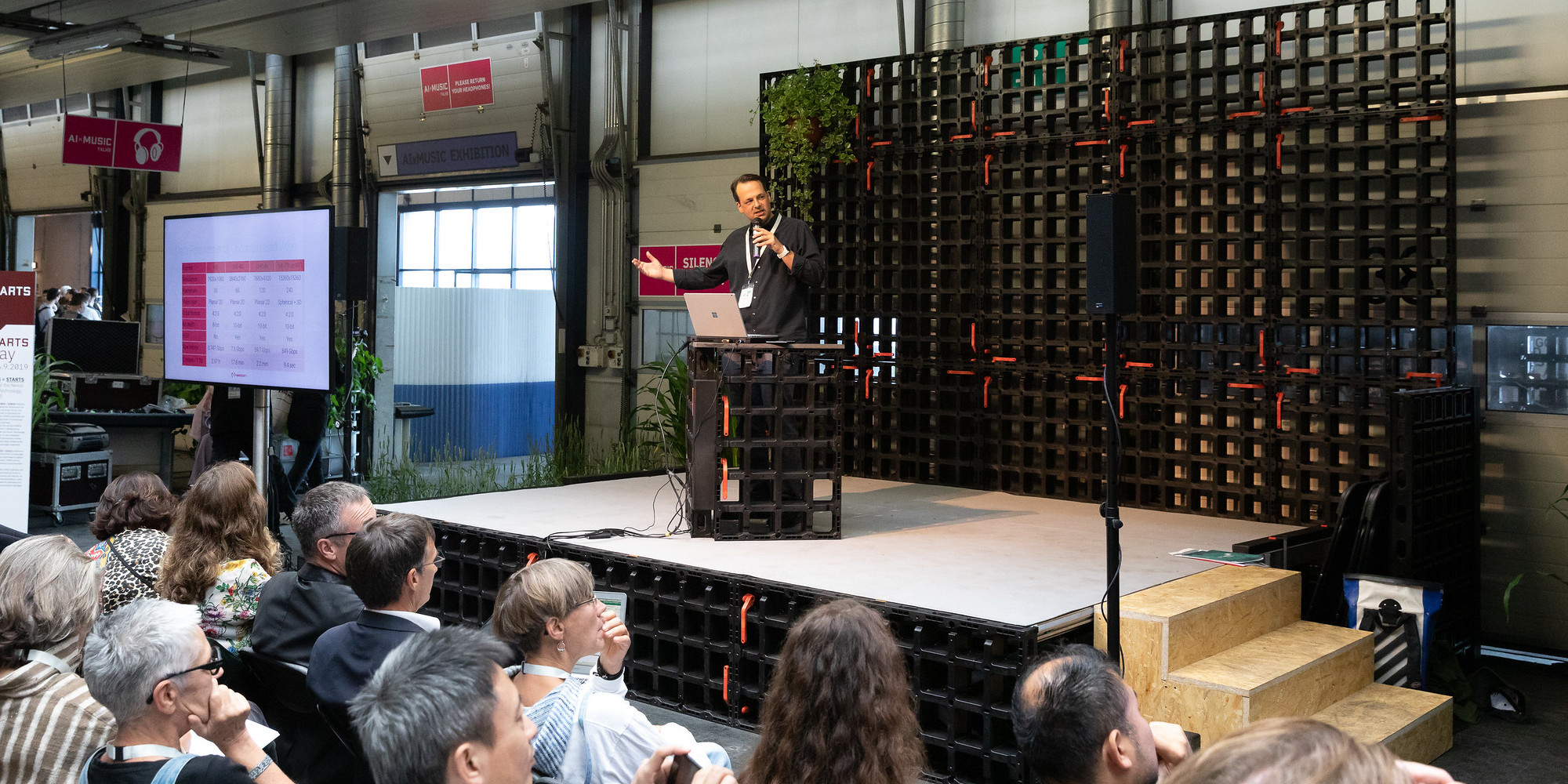 Practices and impacts of interdisciplinary approaches will be discussed through innovative projects, with a special focus on the link between artificial intelligence and music.

Hideaki Ogawa (JP/AT)
Hideaki Ogawa (JP/AT) is a creative catalyst, artist, curator and researcher in the field of art, technology, and society. He has realized many projects for innovation with industries such as Honda R&D, Toshiba, Toyota, NTT, and Hakuhodo etc. Specially, his focus is about Art Thinking to catalyse innovation. His leading project, Ars Electronica Tokyo Initiative, is a creative and innovation base jointly-developed by Hakuhodo and Ars Electronica. Through “synergy” with distinctive worldwide innovators in the fields of art, science, and technology, the project produces new concepts, ideas, and strategies that serve as answers to various “creative questions”. In addition to the artistic innovation research, he has realized international projects for festivals, export programs like Ars Electronica in the Knowledge Capital, School of the Future with Tokyo Midtown and the Ars Electronica Center. His special theme is about “Creative Catalyst” and “Robotinitiy – what is the nature of being a robot”. He is also a representative and artistic director of the media artist group “h.o”. He searches for witty new idea depending on current social contexts, and Hideaki Ogawa is realizing artistic expressions with the speed of technological progress.

Sabine Engelhardt (DE) & Alexander Mankowsky (DE)
Sabine Engelhardt studied librarianship in Mannheim and Stuttgart. She studied Communication Science and Philosophy in Berlin, focused on mnemonics as a computer supported knowledge management technique for her masters, and joined the research department at Daimler with Alexander Mankowsky. She has been with Daimler Research since then, working in diverse areas like Knowledge Management and on the Female Perspective on mobility. She developed the perfume device for the current Mercedes-Benz cars and loves this aspect of creating new perfumes in her job. SLAP represents an exciting new endeavor.

Alexander Mankowsky (DE), born in Berlin 1957, studied Social Science, Philosophy and Psychology at the ‘Freie Universität Berlin’. In 1989 he started working in the research institute of Daimler in Berlin. The multidisciplinary approach in the institute integrated a wide array of disciplines, from social sciences to artificial intelligence. His current working topics are Futures Studies, focussed on the ever changing culture of mobility, the interdependency of social and technological innovation and other aspects of envisioning paths into the future.

Isabel Berz (ES)
Isabel Berz (DE) is Head of IED REC, the Research and Education Center at the Istituto Europeo di Design, Spain. As Fashion Designer, Researcher and Educator, Isabel launched her own fashion label in 1990. In 2004 she was nominated Director of the Fashion School at IED Madrid, and in 2016 she founded IED REC, Research and Education Center in Madrid as an incubator of research at the intersection of Fashion, Design, Craft and Technology. IED REC creates research programmes like IED CoDesign Project Las Manuelas, IED Craft Platform and is Partner of the EU Cosme Worth Partnership Project and the EU Horizon 2020 Re-FREAM Project.

Alejandro Martín Naranjo (ES)
Innovation and EU projects Director in Espronceda, Institute of Art and Culture, Barcelona. Alejandro is a contemporary art curator, art collector, artist, scientist, business executive and philanthropist.
He is cooperating with Espronceda since 2015 as curator and strategic advisor for international development and cooperation with major Art Institutions and Universities. Developing programmes of inter-disciplinarity of Arts, Science, Technology and Entrepreneurship: ACT UTOPIA LAB and now managing the cooperation of Espronceda in the Consortium of project Mindspaces/ STARTS lighthouse pilots, Horizon2020 funded by European Commission. Alejandro believes strongly in the transformative power of Art and Humanism on the technological development, knowledge creation and social wellbeing.
Hi has a Degree and Master’s Degree in Chemical Engineering and a Degree in Fine Arts, also a Master’s degree in Artistic Research and Production, and now coursing a Master’s Degree in Cultural Management. UB, Barcelona University.

Florina Costamoling (AT)
Florina Costamoling (AT) studied Time-based and Interactive Media at the Linz Art University, has a background in Informatics and worked independently in the film production sector. Since 2015, she has been producer at Ars Electronica in the FESTIVAL PRIX EXHIBITIONS area, where she has worked alongside the Women in Media Arts project for the exhibitions 1001 model (Ars Electronica Festival, 2015) and Human Factor, Endless Prototyping (DRIVE, Volkswagen Group Forum Berlin, 2016). Since 2017 she is project manager and researcher for the STARTS Prize (Grand prize of the European Commission honoring innovation in technology, industry and society stimulated by the arts).

Nicolas Henchoz (CH)
Nicolas Henchoz is the founding director of the EPFL+ECAL Lab, the design research center of the Ecole polytechnique federale de Lausanne, where he has created a curricula in Design Research for Digital Innovation. He’s the curator of more than 30 projects presented in venues like the Musée des arts décoratifs de Paris, the Royal College of art in London or the Aronson Gallery in NYC. He’s a co-founder of the Global Alliance for Media Innovation and visiting professor at the Politecnico di Milano

Hugues Vinet (FR)
Hugues Vinet is Director of Innovation and Research Means of IRCAM and has managed all research, development and tech transfer activities at IRCAM since 1994. He has directed many collaborative R&D projects and is currently Coordinator of the STARTS Residencies program. He also curates the Vertigo Forum art-science yearly symposium at Centre Pompidou. He participates in various bodies of experts in the fields of audio, music, multimedia, information technology and technological innovation.

Vero Bollow (US)
Filmmaker Vero Bollow tells stories about science, technology, and the idiosyncracies of the human spirit. Her international feature, The Wind and the Water was nominated for the grand jury prize at the Sundance film festival. In 2014, she founded Stochastic Labs to support pioneering creative ventures in the SF bay area. Vero holds master’s degrees from MIT and Columbia. She is also the director of the Minerva Foundation.

Domhnaill Hernon (IE)
Domhnaill Hernon is an award-winning technology, innovation and creativity executive. Domhnaill received an undergrad in Aeronautical Engineering and a PhD in Aerodynamics from the University of Limerick and an executive MBA from Dublin City University, Ireland. He previously led R&D organizations and developed and executed strategies to overcome the “innovation valley of death”. He is Head of Experiments in Art and Technology (E.A.T) which is a new initiative he founded to fuse art and engineering/science to develop solutions that humanize technology. Domhnaill’ s work has been featured in Wired Magazine, Times Square, SXSW, Nasdaq, MWC and Inspirefest to name just a few and he advises cultural programs globally.

Aurelie Delater (PT)
After personal and profissional experiences in France and Brazil, working with NGOs and Academia, I am now a Senior Consultant at INOVA+, Portuguese consultancy coordinator of the H2020 project STARTS ECOSYSTEM.
STARTS is about thinking out-of-the-box and building bridges between Science, Technology and Arts. It is a European initiative based on the conviction that collaborations between artists researchers and engineers lead to disruption and mind-openness, generating more inclusive and sustainable innovation.
I love the energy of creators and artists, and the value they bring to innovation and to thinking out of the box, at social, economic and environmental level. I am particularly interested in supporting the co-creation processes between Tech and Arts, through the monitoring of residencies, and the development of mechanisms that can enhance this type of hybrid collaborations. I am currently working on the remodelling of the starts.eu platform to enhance and support hybrid collaborations under the STARTS initiative.

Roland Haring (AT)
Roland Haring studied Media Technology and Design at Hagenberg University of Applied Sciences. Since 2003 he has been a member of the Ars Electronica Futurelab and one of the driving forces behind the lab’s R&D efforts. His activities include research and development in several large R&D projects with academic, artistic and commercial partners and collaborators. Currently Roland Haring is Technical Director of Ars Electronica Futurelab and co-responsible for its general management, content conception and technical development. With his many years of experience in the (software) technical management of large-scale, research-intensive projects, he is an expert in the design, architecture and development of interactive applications.

Maurice Benayoun (FR/HK)
Maurice Benayoun (MoBen, 莫奔) is artist, theorist and curator and a pioneering figure in the field of New Media Art. His work explores media boundaries, from virtual reality to large-scale public art installations, from a socio-political perspective. Benayoun has been widely awarded (4 Prix Ars Electronica awards, Golden Nica 1998…) and exhibited in major international museums, biennials and festivals. Some of MoBen’s major artworks include Tunnel under the Atlantic (95), World Skin, a Photo Safari in the Land of War (97). MoBen’s most recent works investigate the concepts of critical fusion and transactional aesthetics. Benayoun is currently Professor at the School of Creative Media, City University Hong Kong.