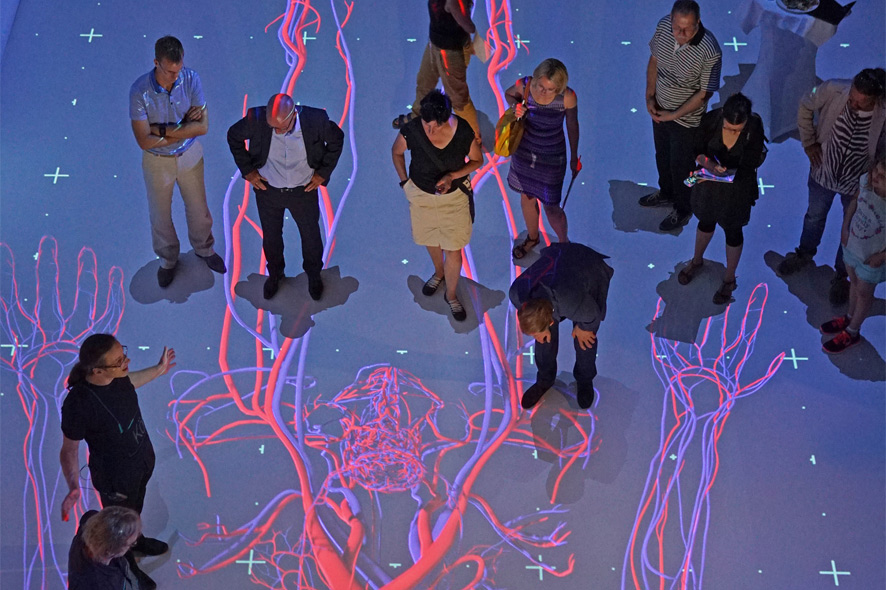 Games producers – whether for PCs, game consoles and mobile devices – are increasingly relying on the use of “Unity“, a development environment for interactive realistic 3-D graphics. Also, the Ars Electronica Futurelab has developed its newest application “Human Bodies: The Universe Within” for the Deep Space 8K with “Unity”. In her presentation “Virtual Reality for Large Multi-User Environments” the developers Roland Haring, Michael Mayr and Clemens Francis Scharfen of the Ars Electronica Futurelab presented the project to an international audience at the “Unite 2015” in September in Boston. Learn more in this 30-minute video – after a brief summary of Ars Electronica and the Deep Space 8K with its wall and floor projections – about the concept, the mood boards, the interfaces for infotrainers and the audience, and about the implementation from the perspective of the developers.

“Human Bodies: The Universe Within” can be seen in Deep Space 8K at the Ars Electronica Center. Additionally, on SAT October 17 and SUN October 18, 2015, experts from the medical field (German language only) will have their say in Deep Space 8K.