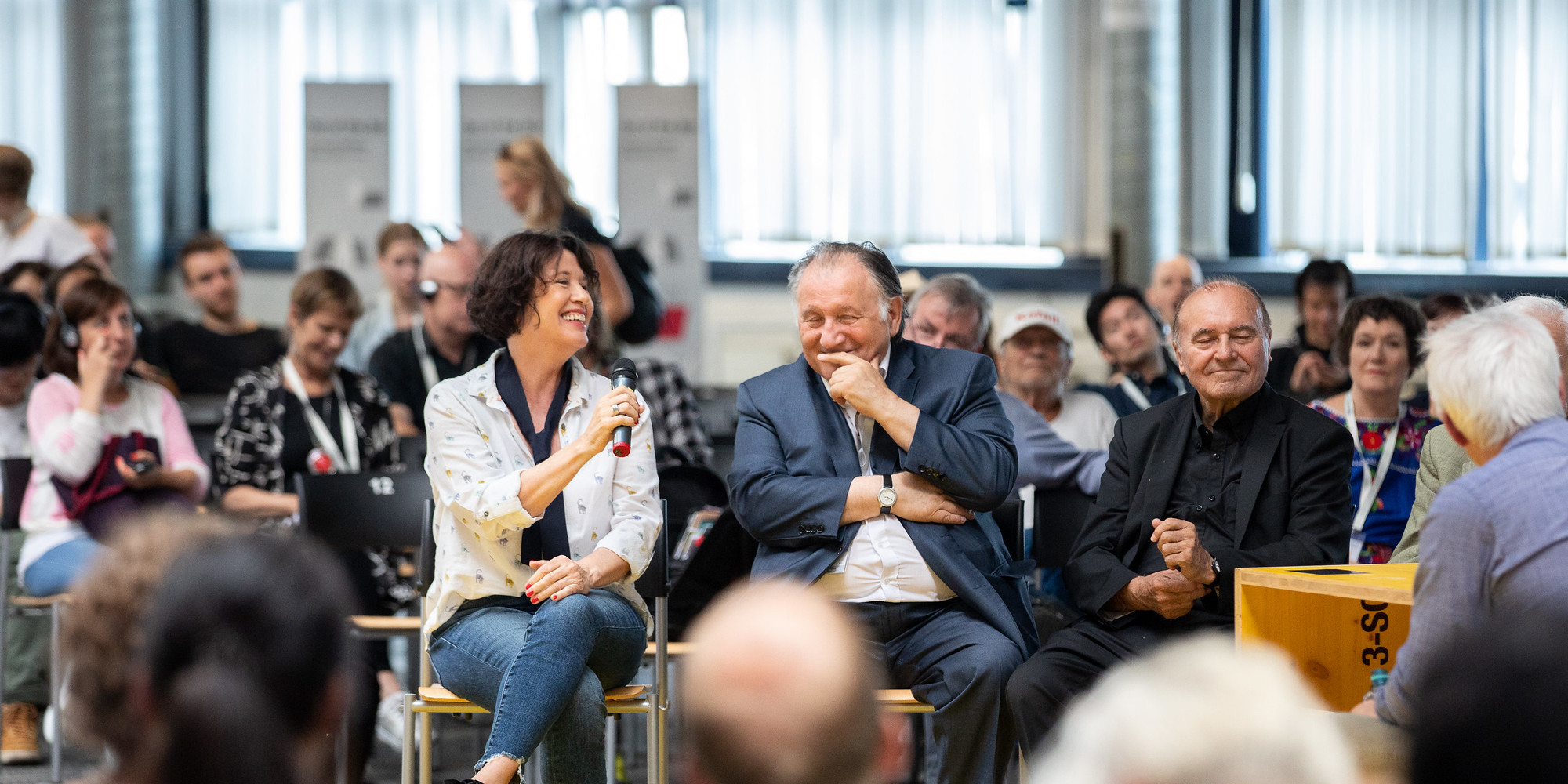 Hannes Leopoldseder (AT), Christine Schöpf (AT), Peter Weibel (AT), Gottfried Hattinger (AT), Regina Patsch (AT), Andreas J. Hirsch (AT)

Gerfried Stocker (AT)
Gerfried Stocker is a media artist and telecommunications engineer. In 1991, he founded x-space, a team formed to carry out interdisciplinary projects, which went on to produce numerous installations and performances featuring elements of interaction, robotics and telecommunications. Since 1995, Gerfried Stocker has been artistic director of Ars Electronica. In 1995-96, he headed the crew of artists and technicians that developed the Ars Electronica Center’s pioneering new exhibition strategies and set up the facility’s in-house R&D department, the Ars Electronica Futurelab. He has been chiefly responsible for conceiving and implementing the series of international exhibitions that Ars Electronica has staged since 2004, and, beginning in 2005, for the planning and thematic repositioning of the new, expanded Ars Electronica Center, which opened its doors in January 2009.

Peter Weibel (AT)
Peter Weibel is an Austrian artist, curator, and media theorist. He is chairman and CEO of ZKM | Center for Art and Media Karlsruhe and director of the Peter Weibel Research Institute for Digital Cultures at the University of Applied Arts Vienna. He was professor of media theory at the University of Applied Arts Vienna, head of the Digital Arts Laboratory at the Media Department of New York University in Buffalo and founding director of the Institute of New Media at the Städelschule in Frankfurt/Main

Gottfried Hattinger (AT)
Gottfried Hattinger was the artistic director of the Ars Electronica Festival at the Brucknerhaus Linz from 1987 to 1991. Since then he has been active as a freelancer, among others in Graz (steirischer herbst), Fukui City Japan, ‘ten Bosch Holland, Linz – Landesgalerie (Object:Video; An die Arbeit), OK Centrum für Gegenwartskunst (Performance; Sozialmaschine Geld), Europäischer Kulturmonat (Hybrid Factory) -, Klangraum Krems (Seltsame Musik), Künstlerhaus Wien (Space Inventions). From 1995 to 2015 artistic co-director of the theater and performance festival Spielart München (Theaterpreis der Stadt München 2008); from 2011 to 2017 artistic director of the Festival der Regionen. He is currently artistic director of the KulturRegion Stuttgart 2020 (Unter Beobachtung. Kunst des Rückzugs). Author of the book “Über die Sinne” 2007; currently finished “Das Maschinenbuch. Art and cultural history of the apparatuses”.

Josephine Bosma (NL)
Josephine Bosma is a Dutch critic and theorist. She specializes in art in the context of the Internet. From 1993 her work initially appeared as radio reports and interviews on Radio Patapoe and VPRO. In 1997 Bosma became one of the key figures participating in and molding the then new sphere of critical Internet discourse (and practice) taking place in email lists such as Nettime and Rhizome. Since then her writings on net art and net culture appeared in numerous magazines, books and catalogues, both on- and offline. She co-edited the Nettime book README (Autonomedia 1999), the Next5Minutes3 workbook (N5M organization 1999) and briefly edited the online newsletter CREAM (2001-2002). Texts and interviews by Bosma have been part of anthologies like Netzkunst (Inst. für Moderne Kunst Nürnberg 1998), Cyberfeminizam (Centar za Zenske Studije Zagreb 1999), ARt & D, Research and Development in Art (V2_Publishing 2005), Network Art (Routledge 2006), Collect the World, the Artist as Archivist in the Internet Age (Link Art Center 2011), Aram Bartholl, the Speed Book (Gestalten 2012) and Rhizome’s Net Art Anthology (Rhizome, 2019). In 2011 her book Nettitudes – Let’s Talk Net Art appeared with the Institute for Network Cultures in Amsterdam. Josephine Bosma regularly acts as advisor and jury member in the area of art, science and technology.

Andreas Broeckmann (DE)
Andreas Broeckmann is an art historian and curator who lives in Berlin. Currently Visiting Professor for Art History and Media Theory at the Academy of Fine Arts, Leipzig (HGB – Hochschule für Grafik und Buchkunst) and engaged in the research and documentation project, Les Immateriaux Research. From 2011-2016 he directed the Leuphana Arts Program of Leuphana University Lüneburg. He was the Artistic Director of transmediale and ISEA2010 RUHR, Founding Director of the Dortmunder U – Centre for Art and Creativity, and has curated exhibitions and festivals in major European venues. He holds a PhD in Art History from the University of East Anglia, Norwich/UK, and is a private lecturer at Leuphana University. Broeckmann lectures internationally about the history of modern art, media theory, machine aesthetics, and digital culture. He is the author of “Machine Art in the Twentieth Century” (MIT-Press, 2016).

Vuk Ćosić (SI)
One of the fathers of net.art from the mid nineties (along with Jodi, Heath Bunting and Alexei Shoulgin). Wrongly credited with invention of the term net.art (it was Pit Schultz). Co-founder of international forums for internet critique, theory and art Nettime Syndicate and 7-11 and also of the Ljubljana Digital Medialab. Frequently exhibited in very many key and non-key venues around the world, referenced in majority of books and featured in collections of museums and rich people who collect files. A very fine gentleman.

Monika Fleischmann (DE) (1950) and Wolfgang Strauss (DE) (1951) are pioneering German research artists, digital media scientists, and curators of new media art. They founded and co-founded departments for interactive media art such as ART+COM in Berlin, the MARS (Media Arts and Research Studies) – Exploratory Media Lab and the eCulture Factory within the largest German research institutions such as GMD (Gesellschaft für Mathematik und Datenverarbeitung) and Fraunhofer Society. In 1992, the artist couple received the Golden Nica for Interactive Art of the Prix Ars Electronica for „Home of the Brain“ (1990/1992), the first artistic Virtual Reality installation. They are recipients of the 2018 ACM SIGGRAPH Distinguished Artist Award for Lifetime Achievement in Digital Art and Monika was elected to the SIGGRAPH Academy as a research artist that has contributed to the field of interactive media art since the 1980s to the present day. Monika’s and Wolfgang’s artistic research work concentrates on New Media Art, Architecture, Interface Design and Art Theory. They focus on the concept of Mixed Realities, which connects the physical with the virtual world. In 2008 Monika was appointed Honorary Professor of Media Theory and Interactive Media Art at University of Bremen. Both have taught as professors at universities and art academies in Berlin, Saarbrücken, Zurich, Kassel and Siegen. Their pioneering work on Virtual Reality, Visualization, Semantic Web and innovative Interface technology such as „PointScreen“ is shown in exhibitions worldwide as original as possible or as videos or web-based works, e.g. “Home of the Brain”, “Liquid Views”, “Energie-Passagen“, the „Digital Sparks“ academic network and student contest or the media art platform and archive „netzspannung.org” – all hosted at the ZKM | Center for Art and Media Karlsruhe.
http://www.fleischmann-strauss.de

Herbert W. Franke (AT/DE)
Herbert W. Franke was born in 1927 in Vienna. He studied physics, mathematics, chemistry, psychology and philosophy, and earned his doctorate at the University of Vienna with a dissertation on theoretical physics. Since 1957, Herbert W. Franke has been a freelance writer. In 1979, he co-founded Ars Electronica in Linz. In 1980, he was elected to membership in the German PEN Club and awarded the professional title of Professor. He is a member of the Graz Authors Congress and has received numerous prizes, including several for the year’s best science fiction novel. His fascinating utopias are based on insights gained in his scientific work. He has earned a place alongside such greats as Philip K. Dick and Stanislaw Lem as Europe’s best-known sci-fi writers. Herbert W. Franke was also one of the first to utilize the computer as an instrument for creative design

Derrick de Kerckhove (CA)
Derrick de Kerckhove is former Director of the McLuhan Program at the University of Toronto (1983-2008). Returning to Europe, he was professor at the university of Naples (2004-2014), Barcelona (2006-2015), and Visiting Professor in Ancona and now at Politecnico di Milano. Author of a dozen books in as many languages, he lives in Rome as scientific director of Media Duemila and Osservatorio TuttiMedia, his fields of research include Technopsychology, Neuro-cultural research, art and technology, Media Theory, Collaborative Educative Software, and Connected Intelligence.

Kyoko Kunoh (JP)
Kyoko Kunoh is an artist and a researcher of Ars Electronica Futurelab. She has created extensively on art works in the interactive art field, and has been active in a wide range of fields such as directing in the public and commercial space, design of exhibit products, and joint project with companies and universities. Her projects have been featured in many different locations both domestically and internationally including Ars Electronica (Austria), SIGGRAPH (USA), Centre Pompidou (France) and Japan Media Arts Festival (Japan).

Hiroshi Ishii (JP/US)
Hiroshi Ishii (US/JP) is the Jerome B. Wiesner Professor of Media Arts and Sciences, at the MIT Media Lab. He joined the MIT Media Lab in 1995, and founded the Tangible Media Group, which he currently directs. Hiroshi’s research focuses upon the design of seamless interfaces between humans, digital information and the physical environment. His team seeks to change the “painted bits” of GUIs to “tangible bits” by giving physical form to digital information. In 2012, he presented the new vision Radical Atoms to take a leap beyond Tangible Bits by assuming a hypothetical generation of materials that can change form and appearance dynamically, becoming as reconfigurable as pixels on a screen.

Machiko Kusahara (JP)
Machiko Kusahara is a scholar in media art and media archeology. Since early 1980s she curated, published and lectured internationally in the field of digital art and media practice. Her research focuses on interrelations among media technology, art, culture and society such as Device Art, as well as magic lantern and panorama. She is Professor Emerita at Waseda University and holds Ph. D in engineering from University of Tokyo. She served as a jury for Prix Ars in interactive art and net art.

Christine Schöpf (AT)
Christine Schöpf has a Ph.D. in German & Romance languages and literature. She is a radio & TV journalist; 1981-2008, director of cultural/scientific reporting at the ORF – Austrian Broadcasting Company’s Upper Austria Regional Studio. In 2009, she was made honorary professor at the Linz Art University. Serving in numerous capacities since 1979, she has played a key role in the development of Ars Electronica: 1987-2003, conception and organization of the Prix Ars Electronica; since 1996, artistic co-director (with Gerfried Stocker) of the Ars Electronica Festival.

Jens Hauser (DE/FR/DK)
Jens Hauser (DE/FR/DK) is a Paris and Copenhagen based media studies scholar and art curator focusing on the interactions between art and technology, trans-genre and hybrid aesthetics. He is a researcher at the University of Copenhagen’s Medical Museion and the Art/Science Chair at the École Polytechnique Paris-Saclay, a distinguished affiliated faculty at Michigan State University where he co-directs the Bridge Art Program, as well as a faculty member at the Department for Image Science at the Danube University Krems, Austria, and guest professor at the University of Applied Arts in Vienna.

Marta de Menezes (PT)
Marta de Menezes is a Portuguese artist (b. Lisbon, 1975) with a degree in Fine Arts by the University in Lisbon, a MSt in History of Art and Visual Culture by the University of Oxford, and a PhD candidate at the University of Leiden.
She has been exploring the intersection between Art and Biology, working in research laboratories demonstrating that new biological technologies can be used as new art medium.
In 1999 de Menezes created her first biological artwork (Nature?) by modifying the wing patterns of live butterflies. Since then, she has used diverse biological techniques including functional MRI of the brain to create portraits where the mind can be visualised (Functional Portraits, 2002); fluorescent DNA probes to create micro-sculptures in human cell nuclei (nucleArt, 2002); sculptures made of proteins (Proteic Portrait, 2002-2007), DNA (Innercloud, 2003; The Family, 2004) or incorporating live neurons (Tree of Knowledge, 2005) or bacteria (Decon, 2007). Her work has been presented internationally in exhibitions, articles and lectures.
She is currently the artistic director of Ectopia, an experimental art laboratory in Lisbon, and Director of Cultivamos Cultura in the South of Portugal.