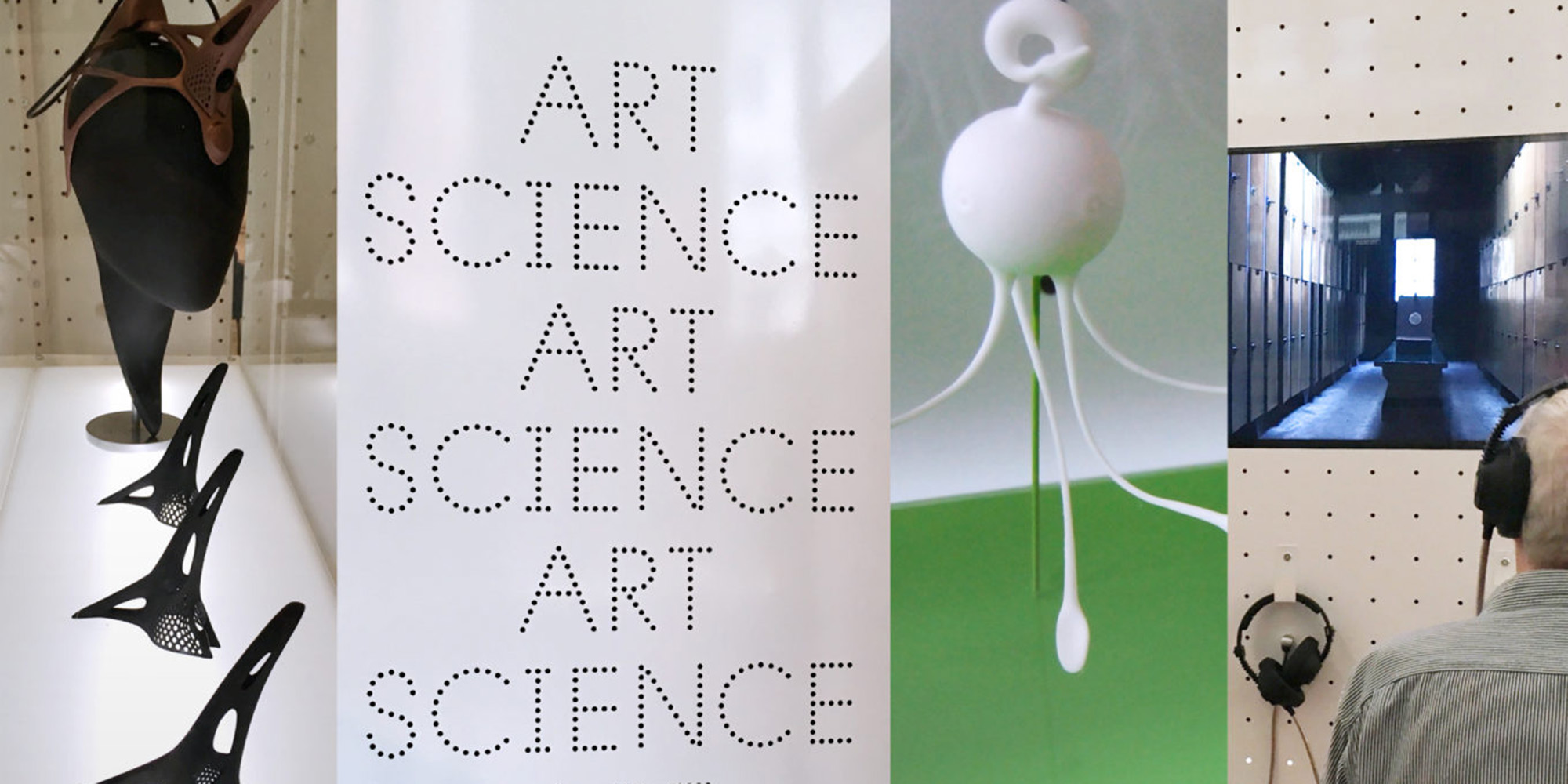 The first series of SPARKS exhibitions running in four European cities showcases four artist-in-residency recipients’ highly individualistic takes on the subject of Responsible Research and Innovation and the fascinating ways they developed them further at the Ars Electronica Futurelab. Interested visitors at the opening of „Beyond The Lab: The DIY Science Revolution“ – exhibition, Science Museum, London. Credit: Clémentine Daubeuf

The title “Beyond the Lab: The DIY Science Revolution” clearly enunciates the task at hand: building a bridge from the natural sciences to a broader understanding of visionary research. Fashiontech designer Anouk Wipprecht, body architect Lucy McRae and product designers Jakob and Lea Illera deployed highly dissimilar artistic means in playing the role of mediator. Lea and Jakob Illera’s “BeBots”, nanorobots, which should help to block the appetite for unhealthy food. Credit: Clémentine Daubeuf

The enormous interest displayed by guests at the opening at London’s Science Museum on June 7, 2016 and the positive feedback from them convincingly confirmed that the mission being pursued by the EU-subsidized SPARKS program was well-chosen indeed: fostering responsible research and a dialog between science and society. And the relevance of the theme had already been reflected by the large number of applications submitted to the Ars Electronica Futurelab by the deadline last September (blog entry: https://ars.electronica.art/aeblog/de/2015/09/13/sparks/). “The Institute of Isolation” – a fictional, observational documentary by Lucy McRae – attracts two visitors of the „Beyond The Lab: The DIY Science Revolution“ – exhibition. Credit: Clémentine Daubeuf On the left: “Agent Unicorn” , a stylish wearable, designed by Anouk Wipprecht. On the right: Properties of the fictional, observational documentary “The Institute of Isolation” by Lucy McRae. Credits: Clémentine Daubeuf

The open call for applications for this artist-in-residency revealed an extraordinarily wide array of artistic creativity that truly impressed project manager Claudia Schnugg. And ultimately, three totally dissimilar approaches won over the jurors representing the members of the Ars Electronica Residency Network: Anouk Wipprecht with a wearable dubbed Agent Unicorn, body architect Lucy McRae with her fictional documentation of The Institute of Isolation, and BeBots, Jakob and Lea Illera’s hypothetical product that employs nanotechnology to treat obesity. What all three works have in common is a high level of potential to get traction and thereby launch a discussion in the public sphere. The BeBots’ mode of operation on display at the„Beyond The Lab: The DIY Science Revolution“ – exhibition. Credit: Clémentine Daubeuf

The great interest displayed by media outlet representatives in fashiontech designer Anouk Wipprecht’s work is a leading indicator of the lively discourse her mix of fashion and technology can generate. The form it takes here is a headset resembling a unicorn’s horn, and thus an idea that can be assessed along a line of development from her Smoke or Robotic Spider Dress. At the Ars Electronica Futurelab, a team of neuroscientists and experts helped her create an accessory that captures the observations of the wearer by means of an EEG. Anouk Wipprecht is prinitng the first draft of “Agent Unicorn” at the Ars Electronica Futurelab via a 3D printer. Credit: Martin Hieslmair On the left: Evolving the masterplan for “Agent Unicorn” at Ars Electronica Futurelab  On the right: An external network of therapists, neuroscientists and hardware developpers, like Dr. Christoph Hintermüller of G.Tec, helped Anouk Wipprecht to create an accessory that captures the observations of the wearer by means of an EEG. Foto: Anouk Wipprecht

By giving an interview, Anouk Wipprecht explains the idea and the conceptualisation of Agent Unicorn.

“It was exciting to follow and foster the collaborative development process. Interactions with various stakeholders evoked interest in the project from so many quarters that it was highly satisfying to see how the project developed into a valuable resource for so many people. It not only created a sensation from artistic and technical perspectives; there were also expressions of interest on the part of concerned parents and therapists, as well as interactions with neuroscientists and other researchers.”

Anouk Wipprecht’s busy schedule of public appearances at a wide array of events including conferences, tech-talks, science cafés and hacker-thons was already generating tremendous advance buzz in connection with “Agent Unicorn,” and the fashiontech designer was already presenting her project to astounded audiences at major events including FITC (Amsterdam), DIGIFEST (Toronto), AWE and EYEO (Minneapolis). “For me, the project is an instrument that could simplify life for a number of people. I concentrate on children but, generally speaking, anyone can wear this device in order to measure his/her brain activity and draw corresponding conclusions from those measurements.” (Anouk Wipprecht) Agent Unicorn is expected to be on exhibit at the 2016 Ars Electronica Festival.

Lucy McRae’s approach to the topic of responsible research and innovation expressed in artistic terms came with a number of challenges. In surmounting them, she was able to rely on excellent support provided by the Ars Electronica Futurelab’s wide-ranging network, and she also benefitted from the transdisciplinary approach of the Futurelab’s team. The logo as a significant eye-catcher – “The Institute of Isolation” – Foto: Claudia Schnugg

There’s a line of continuity extending from McRae’s previous work as a screenwriter, director and actress to her fictional documentary “The Institute of Isolation.” Testing her body in extreme situations is one of the threads running through her oeuvre; fortuitous coincidence is another. “Future Day Spa,” her previous film that was likewise shot in what can be termed a Wes Anderson aesthetic, set off in a direction in which this project now continues. It shows preparations by test subjects for a stay in outer space. Lying beneath an aluminum blanket that, through a vacuum effect, sucks up against the human body has an extraordinary effect on a participant: enabling him to overcome his Touch Syndrome (the fear of being touched) so that, at the conclusion of this procedure, he spontaneously embraced Lucy McRae. This was the initial spark that led to the development of “The Institute of Isolation” that investigates the extent to which one can optimize the body under conditions of various degrees of isolation.

Lucy McRae explains the concept behind her fictional, observational documentary “The Institute of Isolation” at Ars Electronica Futurelab.

In this fictional, observational documentary, Lucy McRae presents the story of a member of the Institute of Isolation, a futuristic organization that performs research on genetic possibilities. It’s the account of an astronaut who experiences on her own body the evolutionary consequences of curating life.

Trailer of “The Institute of Isolation” by Lucy McRae

The narrative builds upon conversations with leading scientists and is driven by important modifications in agriculture, architecture, genetics, the role of technology in delaying death, the assumption of another gender, and other motifs. In going about this, McRae investigates how the human body could possibly change over the course of decades, and the extent to which “human experiences change consciousness.” In conjunction with this work, project manageress Claudia Schnugg emphasized above all the large number of participants who have contributed to successfully bringing it to fruition:

“This project has clearly demonstrated how interested the general public is in this topic itself and in the expression of it in artistic, cinematic terms. The large number of scientists from highly diverse fields of research who worked together with Lucy McRae on the development of her initial concept and who agreed to be interviewed by her, as well as the many different institutions that provided support and consented to serve as shooting locations, were simply overwhelming!” (Claudia Schnugg)

„The Insitute of Isolation“ is expected to be on exhibit at the Ars Electronica Festival 2016.

The third SPARKS-residency was won by Lea und Jakob Illera, managers of the Vienna-based  INSEQ Design Studio. Due to their experiences and innovative approaches in the field of product-design, their idea was a logical extension of their work, but due to the task an artistic one. Lea und Jakob Illera in the BioLab of the Ars Electronica Center show a scribble of the BeBots’ effects. Credit: Michael Mayr

In the context of the SPARKS call, the commercialisation of a disputable medicament which is to fight obesity, the concept works on behalf of a well-known tool: an inhaler, which everybody knows from harmless cold treatment. In the case of the product “BeBots”, the substances are nanorobots, which race through the veins to that part of the brain, where the desire for unhealthy food is actually generated. The BeBot-inhaler and the corresponding packaging. Credit: Jakob Illera On the right: Testubes. On the left: BeBots displayed via microscope, inhaler and packaging. Credit: Jakob Illera

I’ve always been fascinated by cyborgs and conceptions of how human beings and machines will someday interact and, of course, how it feels to have technology inside your body. On the other hand, I’m also interested in the question of what it would mean for society if there were technically “enhanced” human beings. Who can afford that, and who has to do without? (Lea Illera) Freely adapted from Lucas Granach the Younger: the fall in 2016 is due to fast food. Credit: Jakob Illera

The sole question of how the fast food-inudtry would be in full cry over the BeBots is not the only issue at stake. Linked to that invention, there are social hot potatoes such as the sterotyping of looks. Narcissm on the rise causes discrimination of those who don’t want or can not afford this medicament.

Lea and Jakob Illera explain the concept behind the BeBots on the floor of the BioLab at the Ars Electronica Center.

“Increasing human efficiency at any price is another source of concern. Many aspects of this thematic complex are controversial subjects—just consider, for example, computer chips that can be used to cure depression.” (Claudia Schnugg)

As mentioned in the introduction, the exhibits will be displayed in 29 countries. The opening has already happened in four places: „Beyond The Lab“ can be visited at London’s Science Museum until the 28th of August. Also at Bonner LVR Landesmuseum. At Warsaw’s Copernicus Science Center  the exhibition lasts until the 11th of September, the dates for Tehnološki Park Lubiljana will be announced via SPARKS website. Moreover, you’ll find information on other events, such as 6 Science Espressos, 1 Reverse Science Café and a thematic weekend on other issues. Overall 4 clones of the exhibition will be on tour until mid-2018 in every state of the EU as well as Switzerland (and GB) . Also at Ars Electronica Center in Linz from March 29th to June, the 7th 2017.