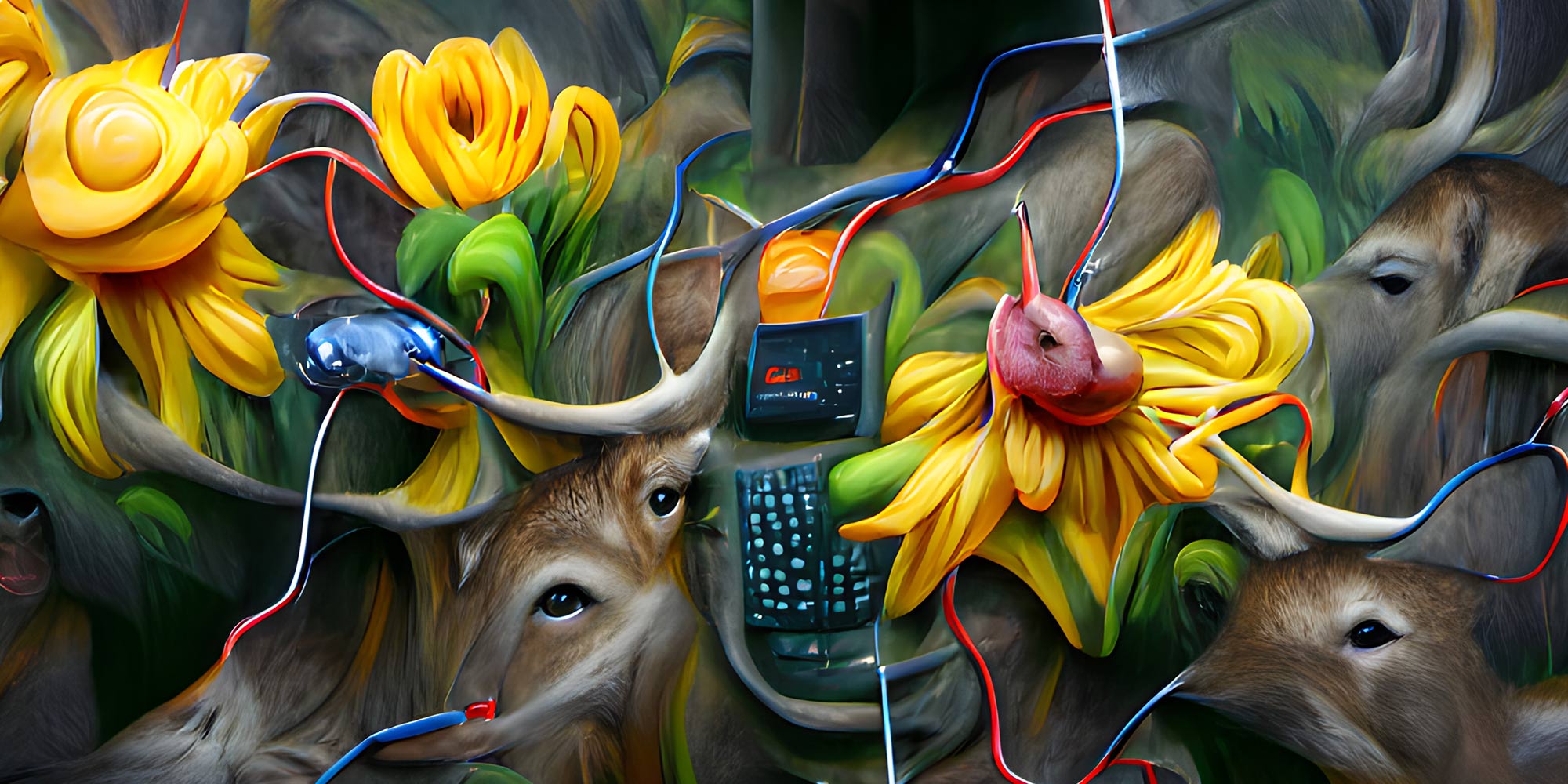 Credit: All Watched Over By Machines Of Loving Grace / Deeper Meditations #1 - #, Memo Akten

For the Taiwan Creative Content Fest (TCCF) in Taipei, Taiwan, Ars Electronica has curated video-based artworks that allow us to take a different look at the festival theme “Metaverse.”

Digital technologies have made many things possible. They enable and evaluate complex data, the design of informed materials, forms and reactions, and open up new methods of production and representation that bring about social and cultural changes. Digital technologies are capable of constructing complex interrelationships from gigantic amounts of data and making them presentable to us in such a way that logic, information, and knowledge emerge from them. The gift of man to develop technologies to meet the desire to exceed their own limits, constructs at the same time always new realities that need to be recognized and understood. The exhibition part of the cooperation between TAICCA and ARS ELECTRONICA is dedicated to this topic and shows through three different artistic positions from three artists, which new realities we have created for ourselves through digital technologies, where the challenges, risks and opportunities lie and above all with which competencies humanity must equip itself to be able to make the newly created realities effective for itself.

The digital revolution leaves no stone unturned. It brings forth new technologies and business models and changes the way we live and the way we think. Target is to actively transform this revolution as something naturally imbedded into our cultural identities and self-understanding. In conjunction with the exhibition, the Ars Electronica Future Thinking School at TAICCA will offer educational formats that open portals into those areas of our society where challenging processes of change will occur or have already occurred as a result of new, innovative technologies. Of course, it will be about identifying and analyzing these challenges. But much more it will be about training a generation of people who understand the power of change and can make it effective for themselves. People who are able to develop new ways and strategies for themselves and the general public in order to use technology where it connects and does not separate. For a better and common Future.

During the days of the event, we will open the exhibition space once a day and transform it into a school of the future. It will be shown what creatives and artists are capable of, together with their critical thinking – ART THINKINGS – when they participate in solving things outside the art world. Towards science, towards economy and industry, towards environment and other living things, etc. 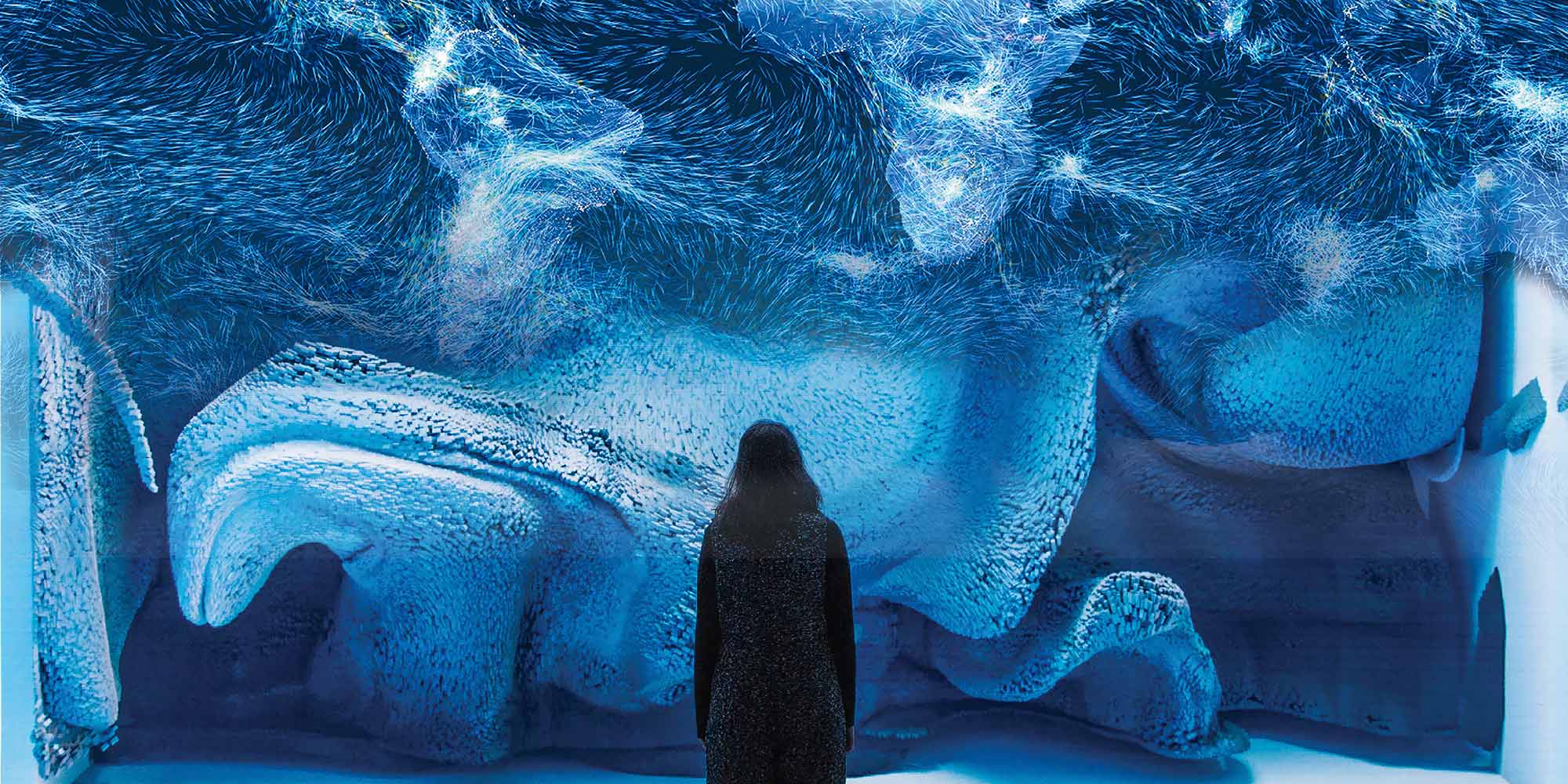 Image Credits: Courtesy of the artist

Wind of Taipei Data Paintings is a site-specific work that turns the invisible patterns of wind in and around Taipei into a series of poetic data paintings within a digital canvas. By using a one-year data set collected from Taipei, Refik Anadol Studios developed a series of custom software to read, analyze and visualize wind speed, direction, and gust patterns along with time and temperature at 20-second intervals throughout the year.

Refik Anadol (b. 1985, Istanbul, Turkey) is a media artist, director and pioneer in the aesthetics of data and machine intelligence. His body of work locates creativity at the intersection of humans and machines. In taking the data that flows around us as the primary material and the neural network of a computerized mind as a collaborator, Anadol paints with a thinking brush, offering us radical visualizations of our digitized memories and expanding the possibilities of architecture, narrative, and the body in motion. Anadol’s site-specific AI data sculptures, live audio/visual performances, and immersive installations take many forms, while encouraging us to rethink our engagement with the physical world, its temporal and spatial dimensions, and the creative potential of machines. 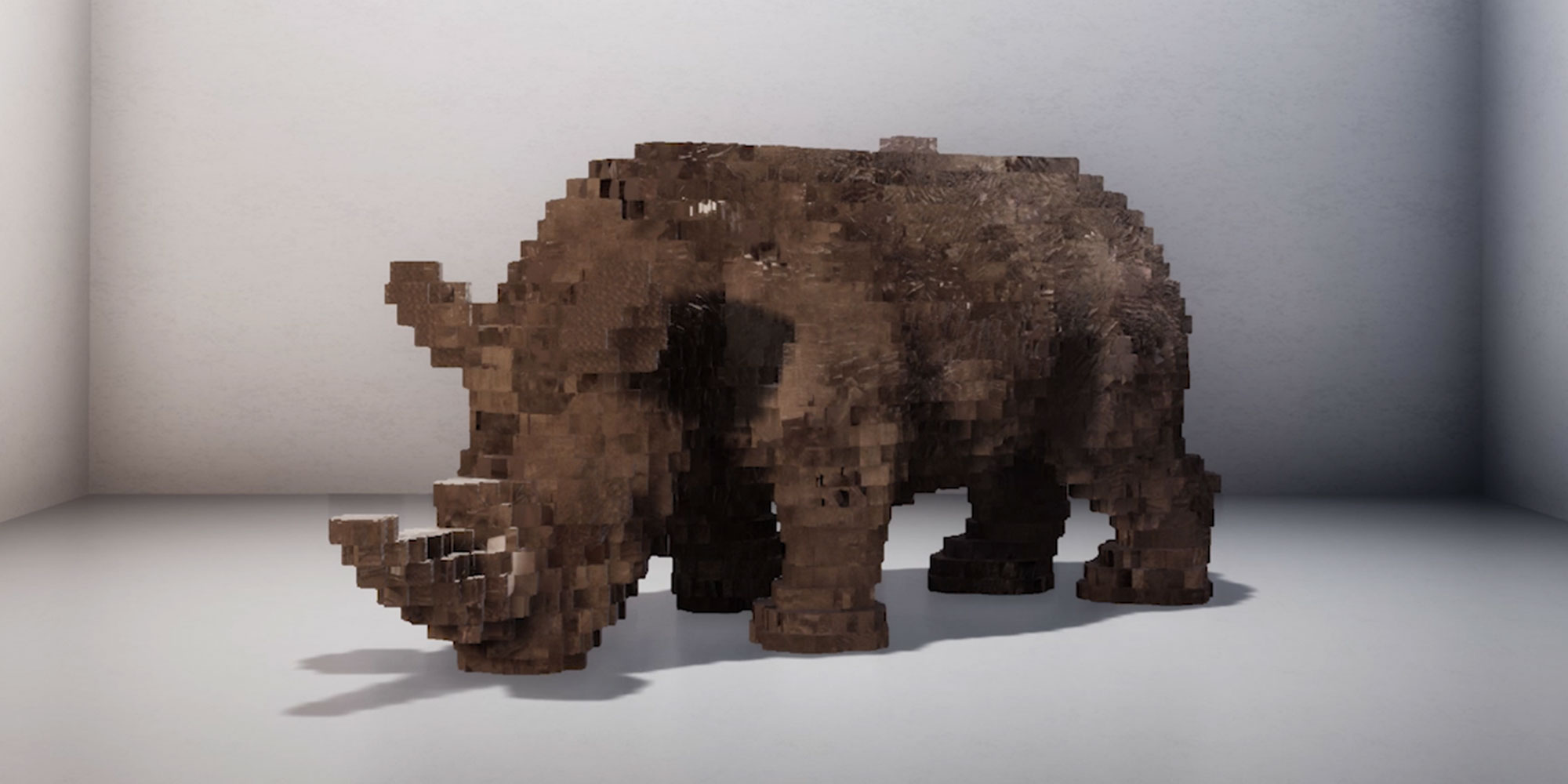 On March 20, 2018, headlines announced the death of Sudan, the last male northern white rhinoceros (Ceratotherium simum cottoni). We briefly mourned a subspecies lost to human desire for the imagined life-enhancing properties of its horn, comforted that it might be brought back using biotechnology, albeit gestated by a different subspecies. But would humans protect a resurrected rhino, having decimated an entire species? And would this new rhino be real?

The Substitute explores a paradox: our preoccupation with creating new life forms, while neglecting existing ones. A northern white rhino is digitally brought back to life, informed by developments in the human creation of artificial intelligence (AI). Based on research from AI lab DeepMind, the rhino performs as an artificial agent, an autonomous entity that learns from its environment. A life-size projection, 5m wide, shows the artificial rhino roaming in a virtual world, becoming more “real” as it comprehends the limits of the space. As the artificial rhino habituates to its space, its form and sound toggle from pixilation to lifelike—reminding the viewer that this living, breathing rhino, coming to life without its natural context, is entirely artificial. The experimental data is played on a second screen, showing the path and development of grid cells. The rhino’s behaviours and sounds are adapted from rare research footage of the last herd, provided by Dr Richard Policht. Is this rhino, coming to life divorced from its natural context, a better substitute for the real?

Credits: Commissioned by the Cooper Hewitt, Smithsonian Design Museum and Cube design museum, 2019. Animation by The Mill with behaviour based on research by DeepMind.

Dr. Alexandra Daisy Ginsberg is an artist examining our fraught relationships with nature and technology. Through artworks, writing, and curatorial projects, Daisy’s work explores subjects as diverse as artificial intelligence, synthetic biology, conservation, biodiversity, and evolution, as she investigates the human impulse to “better” the world. Daisy has spent over ten years experimentally engaging with the field of synthetic biology, developing new roles for artists and designers. She is lead author of Synthetic Aesthetics: Investigating Synthetic Biology’s Designs on Nature (MIT Press, 2014), and in 2017 completed Better, her PhD by practice, at London’s Royal College of Art (RCA), interrogating how powerful dreams of “better” futures shape the things that get designed. She read architecture at the University of Cambridge, was a visiting scholar at Harvard University, and received her MA in Design Interactions from the RCA. Daisy won the World Technology Award for design in 2011, the London Design Medal for Emerging Talent in 2012, and the Dezeen Changemaker Award 2019. Her work has twice been nominated for Designs of the Year (2011, 2015), with Designing for the Sixth Extinction described as “romantic, dangerous… and everything else that inspires us to change and question the world”. Daisy exhibits internationally, including at MoMA New York, the Museum of Contemporary Art, Tokyo, the National Museum of China, the Centre Pompidou, and the Royal Academy. Her work is held in private and museum permanent collections, including the Art Institute of Chicago, the Cooper Hewitt Smithsonian Design Museum, and ZKM Karlsruhe. Talks include TEDGlobal, PopTech, Design Indaba, and the New Yorker Tech Fest. Daisy is a resident at Somerset House Studios, London, and is launching a major new commission for the Eden Project in 2021. 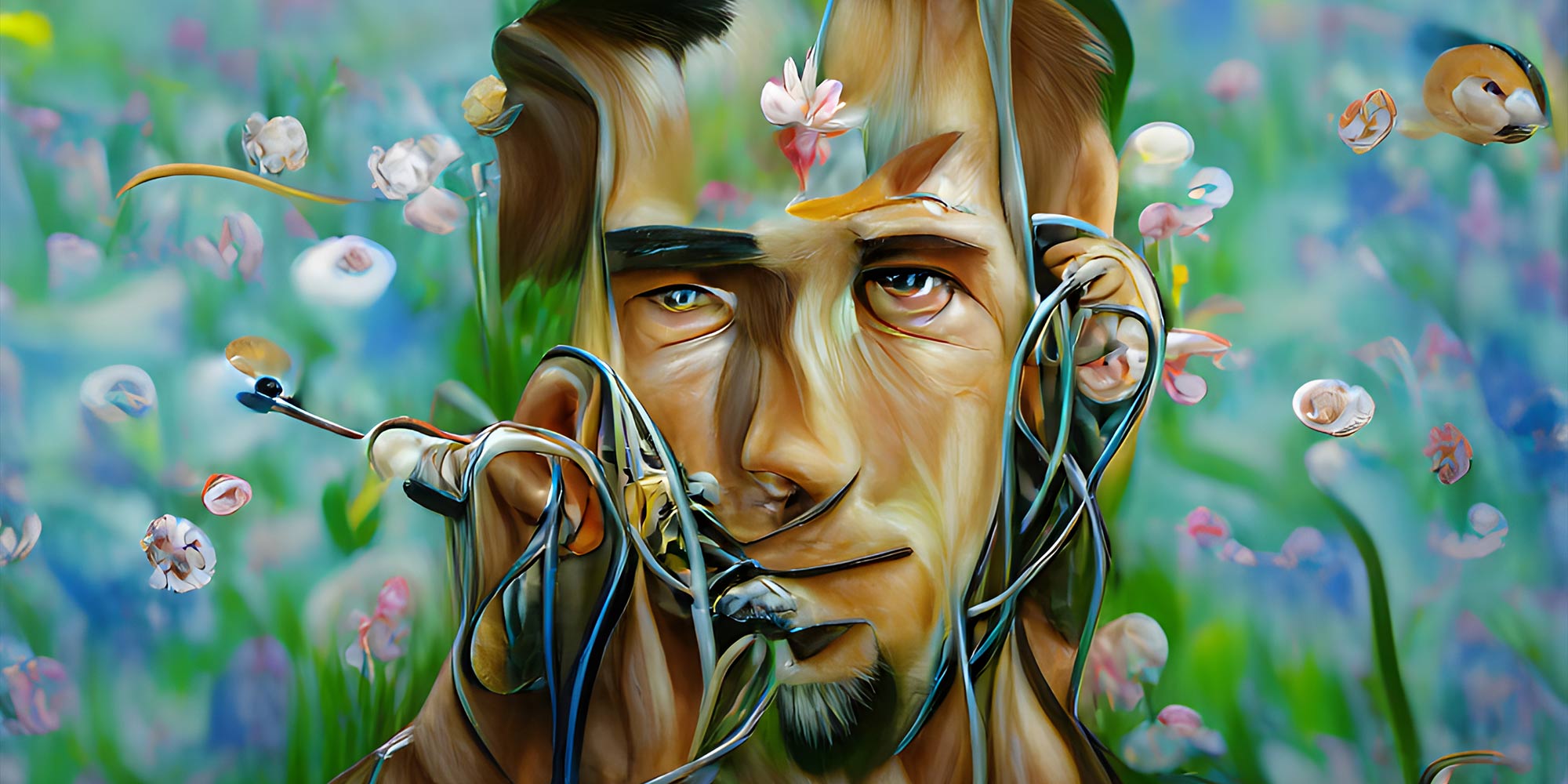 Image Credits: Courtesy of the artist

Taking its title from the late American poet Richard Brautigan’s 1967 poem, “All watched over by machines of loving grace” is a short experimental film about our obsession, fetishization, and deification of technology. In our ongoing race to optimize and computerize, to move fast break things’ in devotion to our holy missions of growth’ and progress’, we often fail to see — let alone to foresee — the undesirable consequences of our misjudged narrow intelligence.

As the boundaries between nature’ and artificial’, between human’ and technology’ are imaginary, non-existent, our efforts to tame nature and subdue her to our will, are in fact an endeavor to tame and imprison ourselves.
The film was created using custom software based on state-of-the-art Machine Learning Artificial Intelligence algorithms.

The two-minute film is followed by six shorter films from the “Deeper Meditations” series of self-reflective, visual-stream-of-consciousness dump self-portraits; explorations into the minds of an artificial, and a biological, neural network.

Memo Akten is an artist, experimental filmmaker, musician and computer scientist from Istanbul, Turkey. He works with emerging technologies and computation as a medium, to create images, sounds, films, large-scale responsive installations and performances. Fascinated by trying to understand the nature of nature and the human condition, he draws from fields such as biological and artificial intelligence, computational creativity, perception, consciousness, neuroscience, fundamental physics, ritual and religion. He has a PhD in Artificial Intelligence / Deep Learning and expressive human-machine interaction from Goldsmiths University of London, and is Assistant Professor of Computational Arts at University of California, San Diego (UCSD). Akten received the Prix Ars Electronica Golden Nica for his work Forms’ in 2013. He has exhibited and performed internationally at venues such as The Grand Palais (Paris FR), The Barbican (London UK), Victoria & Albert Museum, Moscow Museum of Modern Art (Moscow RU), Shanghai Ming Contemporary Art Museum (Shanghai CN) and many others. He has also collaborated with celebrities such as Lenny Kravitz, U2, Depeche Mode and Professor Richard Dawkins.