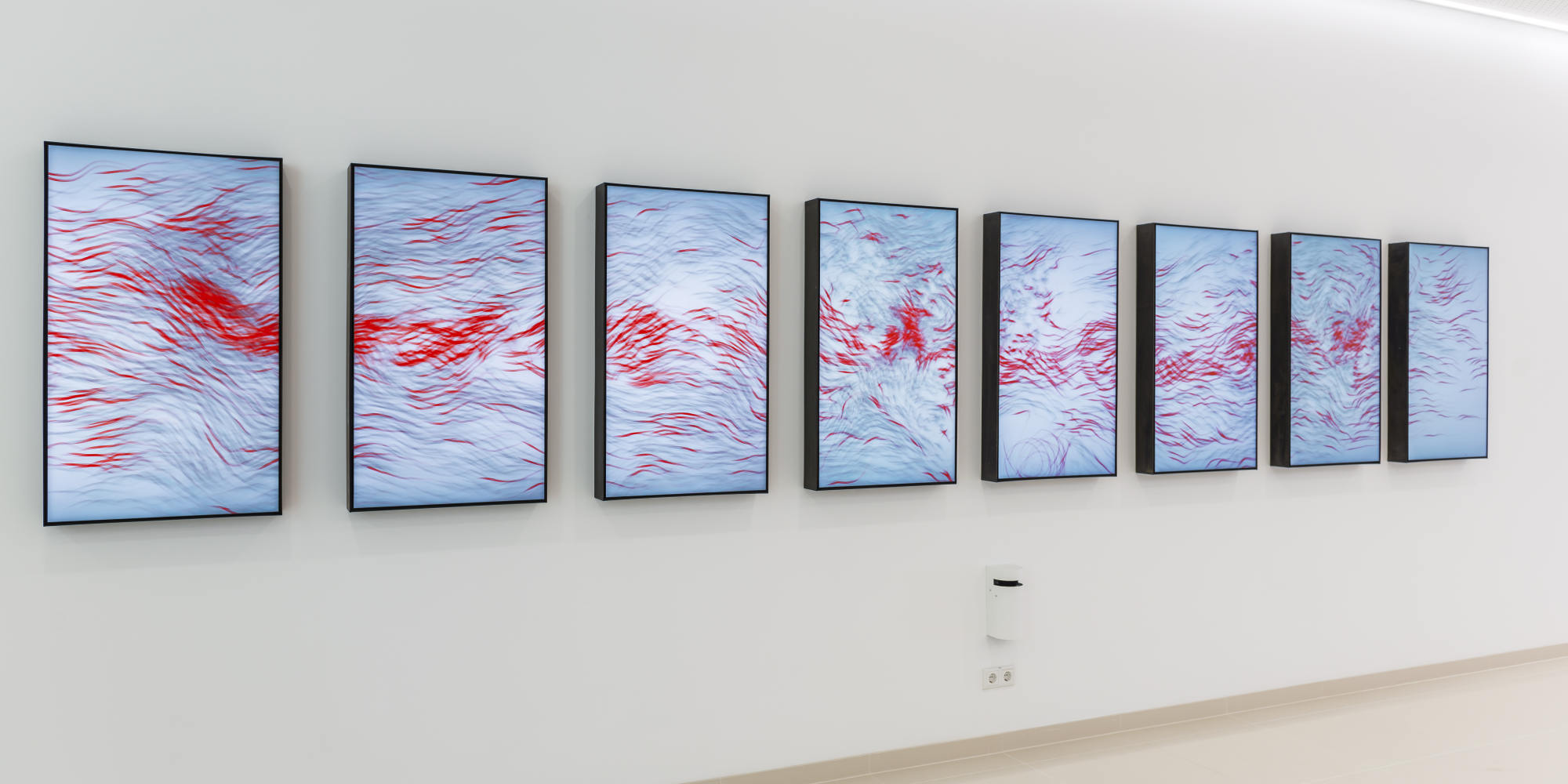 insight | out, a work of media art by the Ars Electronica Futurelab, is a portrait of Oberbank AG Linz rendered on a fragmented frieze made up of eight video screens. The medium itself thus evokes the multiplicity of influences that flow into this portrait – the values that this long-established financial institution represents, the names of the European regions in which Oberbank is present, customers and staff members going about their business in the facility, and, finally, environmental phenomena such as the sun’s position and the wind’s strength. 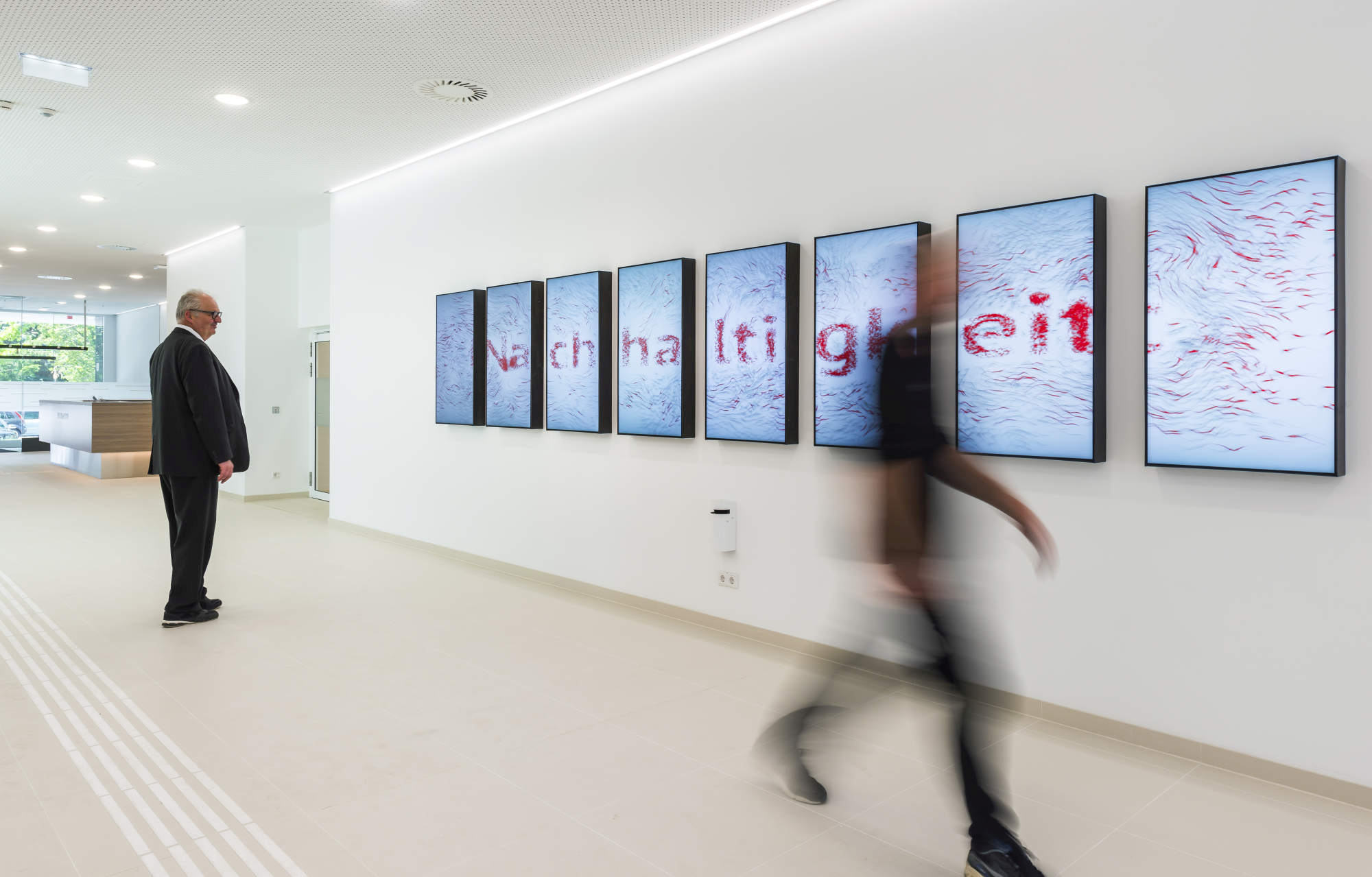 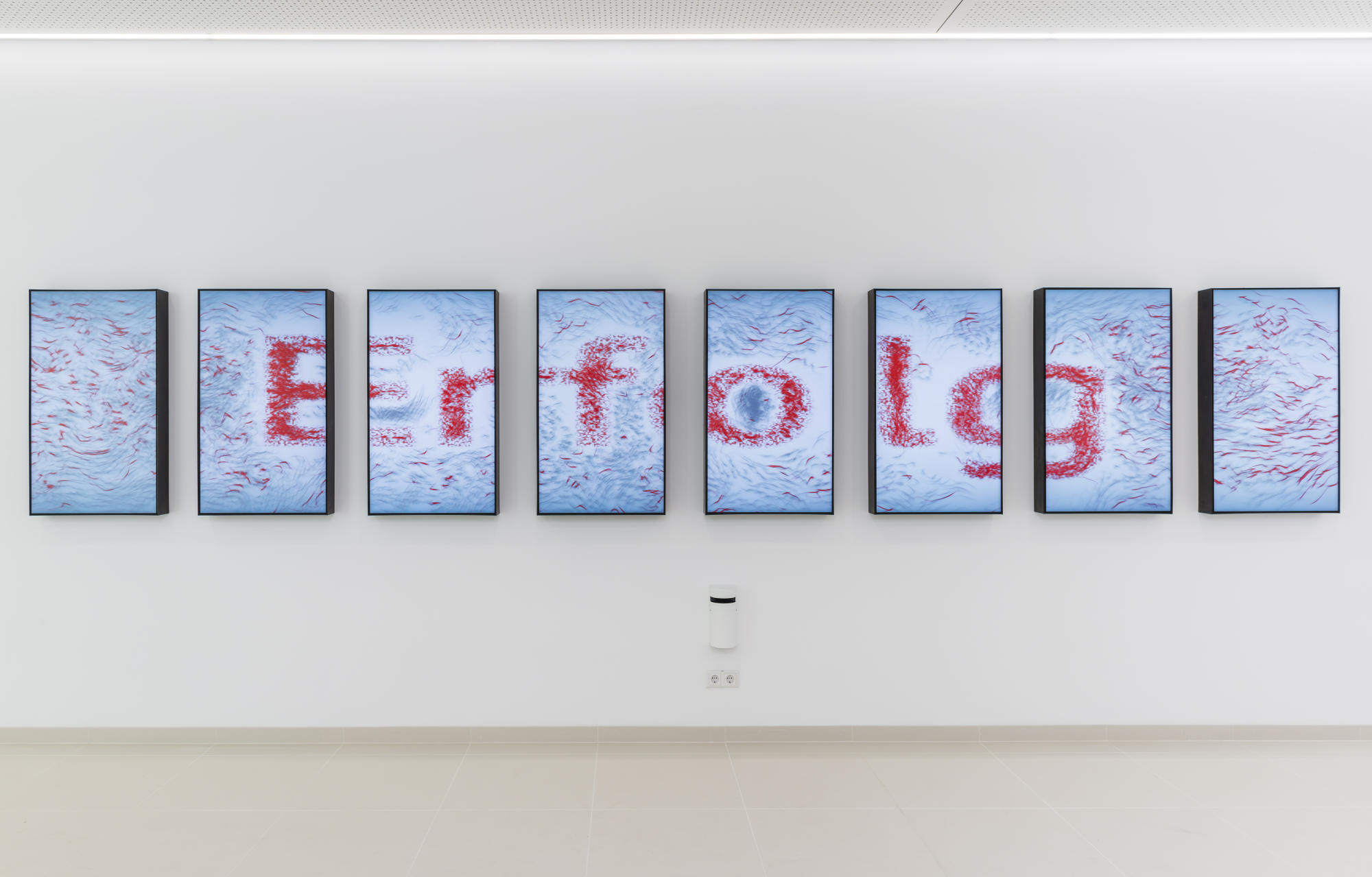 Visually, the image is characterized by particles, the movements and flows of which engender a linear aesthetic akin to a pen-and-ink drawing or a brushstroke, with the lines’ thickness varying over time. The particles have divergent mutual affinities – keeping their distance and seeking proximity. They obey the law of the swarm, attraction and repulsion, depending upon their distance from one another and the factors that influence them.

The red particles are attracted by visitors and/or by writing. Individuals interacting with each other are registered by a tracking system and “drawn” by the particles. The letters in the lines of writing that appear are “filled” by the red particles and thereby made visible. A few “lead particles” see to it that all of the particles are evenly distributed; the other particles follow them to their respectively assigned areas of the space to be drawn.

The particles have been conceived as an emergent element in the sense of “The whole is greater than the sum of its parts.” They constitute a metaphor for the interplay of diverse factors and influences, such as the people (users), monetary flows and transactions that characterize a bank.

The magnitudes derived from the building’s central control system, such as the position of the sun and brightness, minimally change the image’s coloring over the course of the day – in the morning, bluish; in the evening, reddish. The wind strength measured imparts short-duration impulses that “blow” the particles in the corresponding direction. This is a metaphor for being situated in and acting in the midst of a local culture at a specific location.

People in the lobby are registered by the system and positioned in the space depicted in the installation, where customers and staff members can visually experience their influence on the particles and the system as a whole. The visualization swarms about the interacting individuals – a person appears to be both a driving force of and a source of resistance to the current in the ongoing flow of the “aesthetic of capital.” (Richard Kriesche 2017 „die kunst, die freiheit und ihr wert“, FIN/2 Liquid Music, Herausgeber Heimo Ranzenbacher 2017)