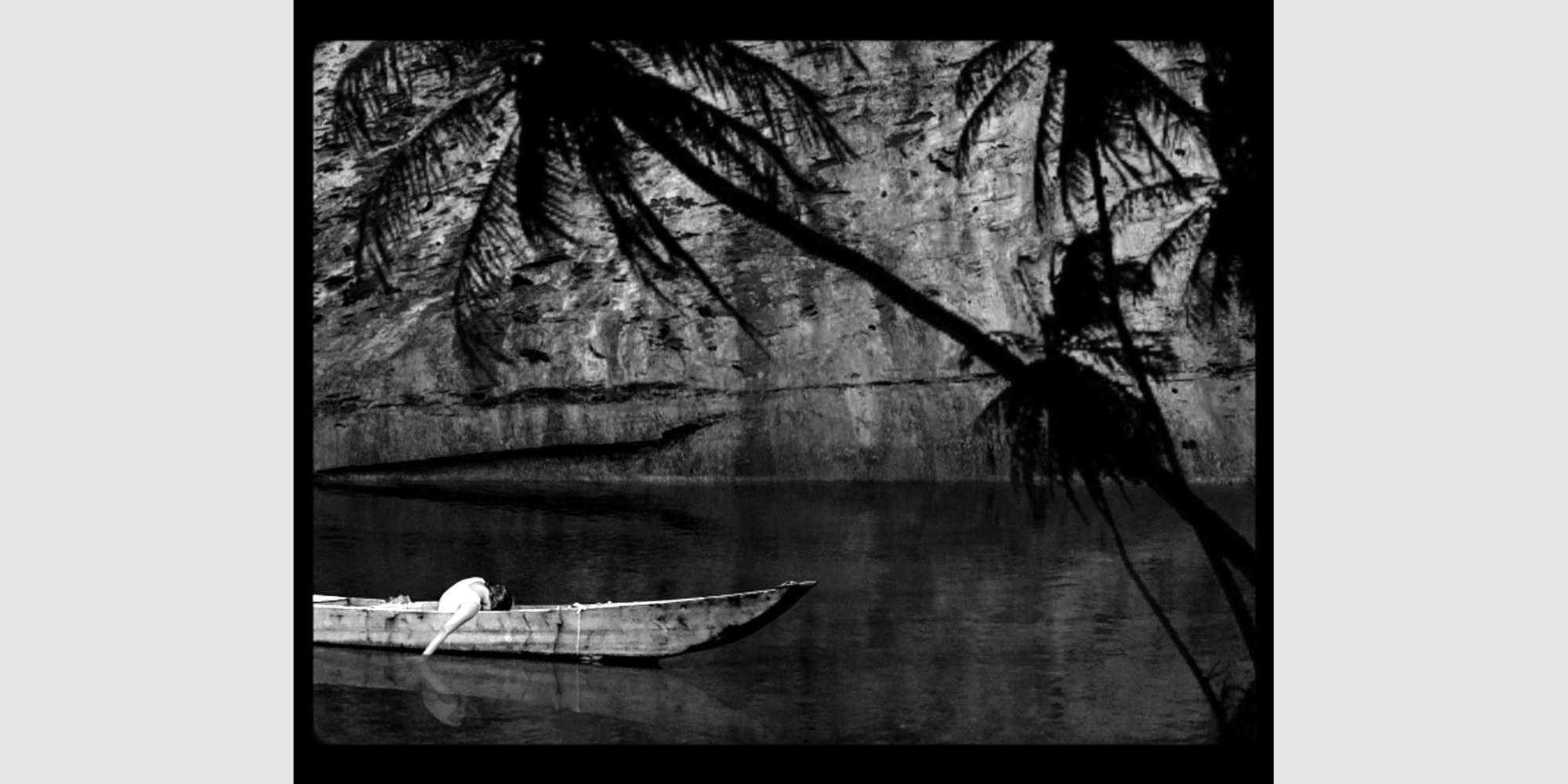 Amidst riots and racial tensions, divisive political rhetoric and a global pandemic, the past half year has been a time of turbulent uncertainty. These acute ruptures and moments of pain, conflict and unknowingness have inadvertently led to a mode of seeing our former and current realities anew, which may more or less best be described as “surreal”.

Devoid of conventional demarcations of time and social interaction, the phenomenon of sheltering-in-place (with its flowing stream of timeless days and self-governed isolation) engendered a pronounced disengagement from established norms, social systems and relationship to the physical world for many. Suddenly or very gradually, people were forced to exist in moments of continuity and discontinuity with the world, oscillating between various temporal strains. This new orientation affects both, but not only, the physiological and intellectual. It prompts us to see – by way of its disillusion of the past – the artifice that underlines our social practices, rules and collective behaviors.

Sparked by the conditions of our current moment, Falling Up, aims to explore the notion of artifice, its nature and how it behaves. How might the idea of artifice offer a way for us to embrace the paradoxes or dialectic of multiple realities? Instead of defining artifice as merely inauthentic or “fake”, this exhibition considers the poeticism to its fiction and how it might go so far as to rescue today’s reality 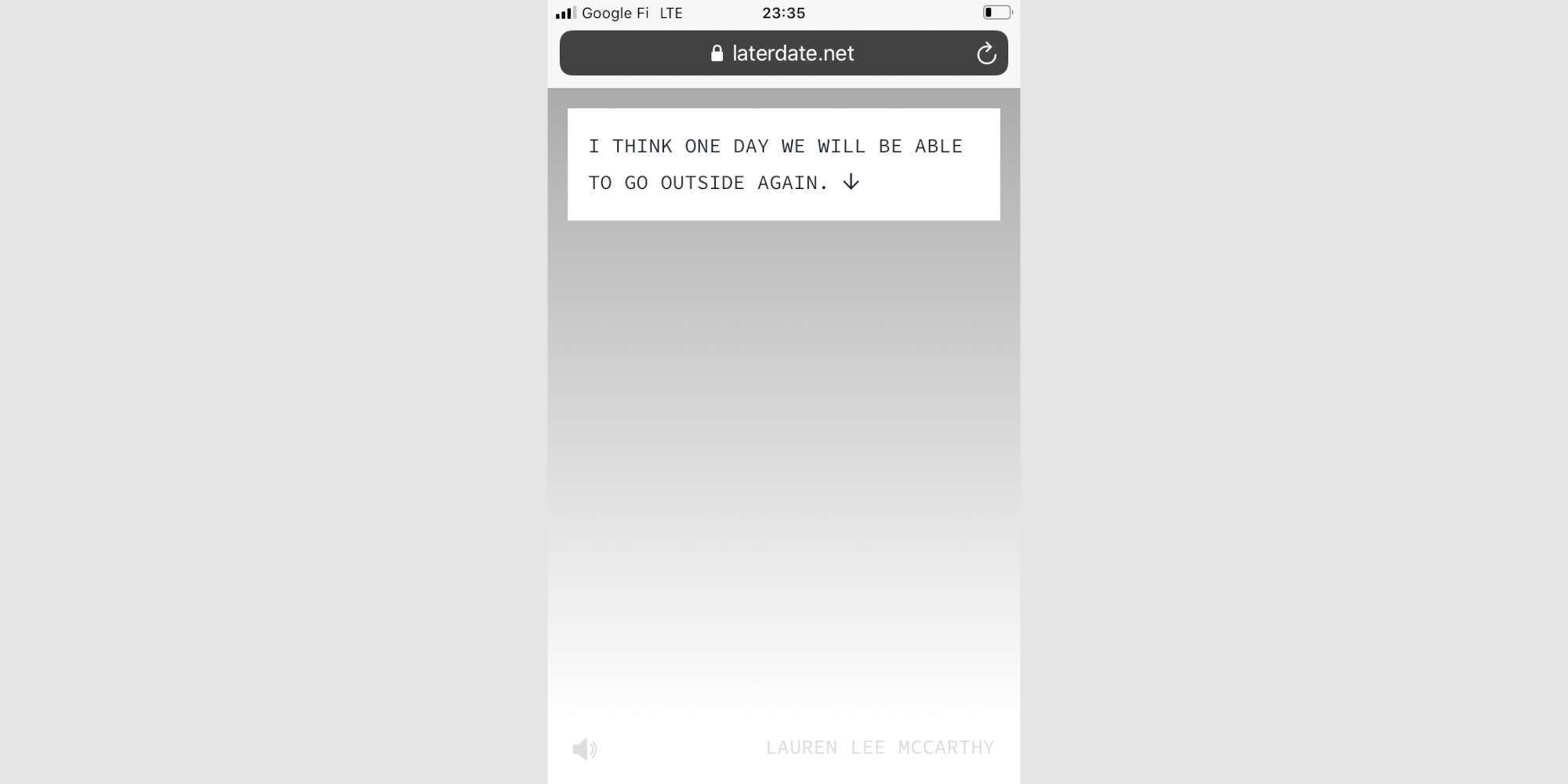 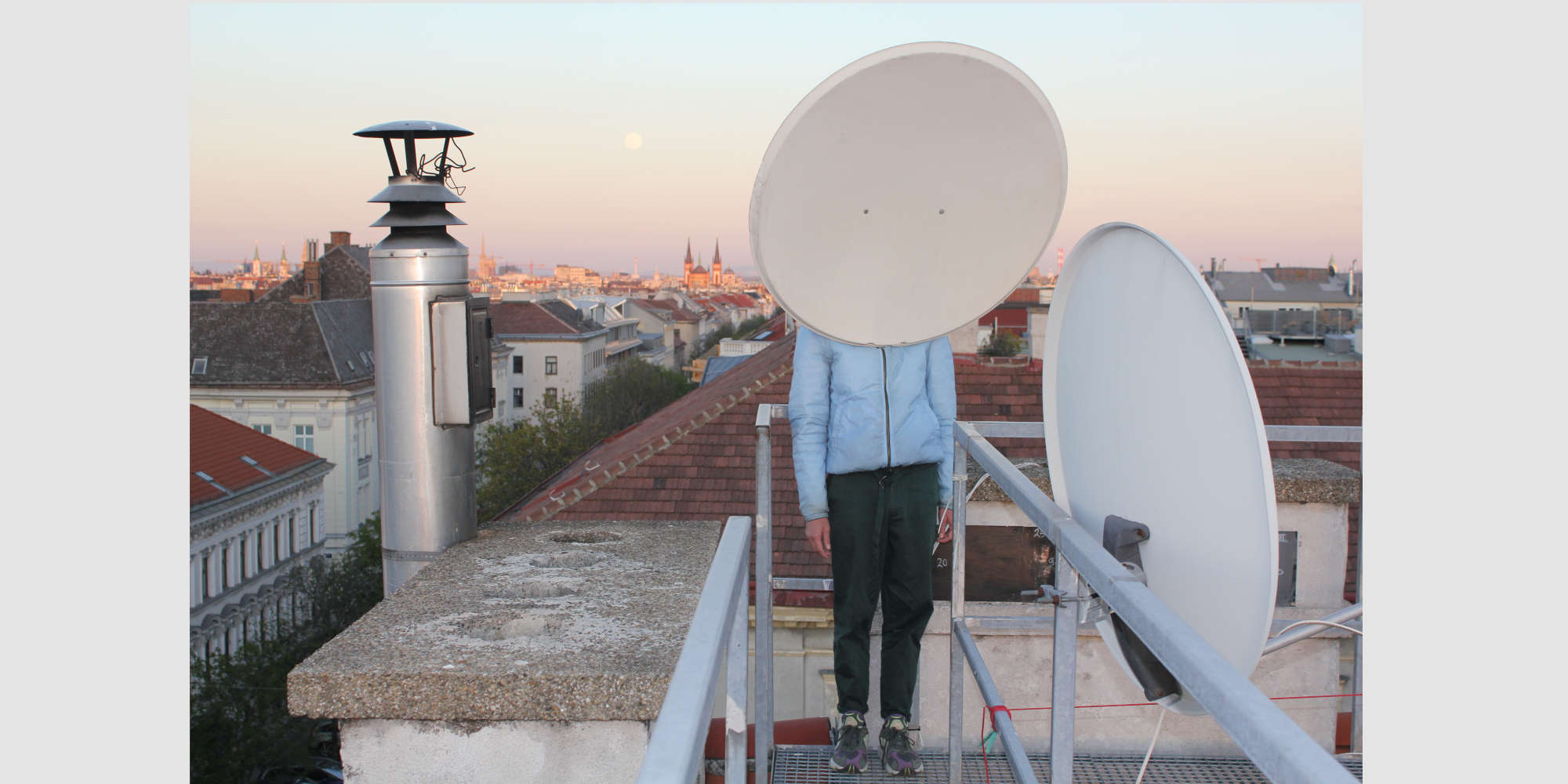 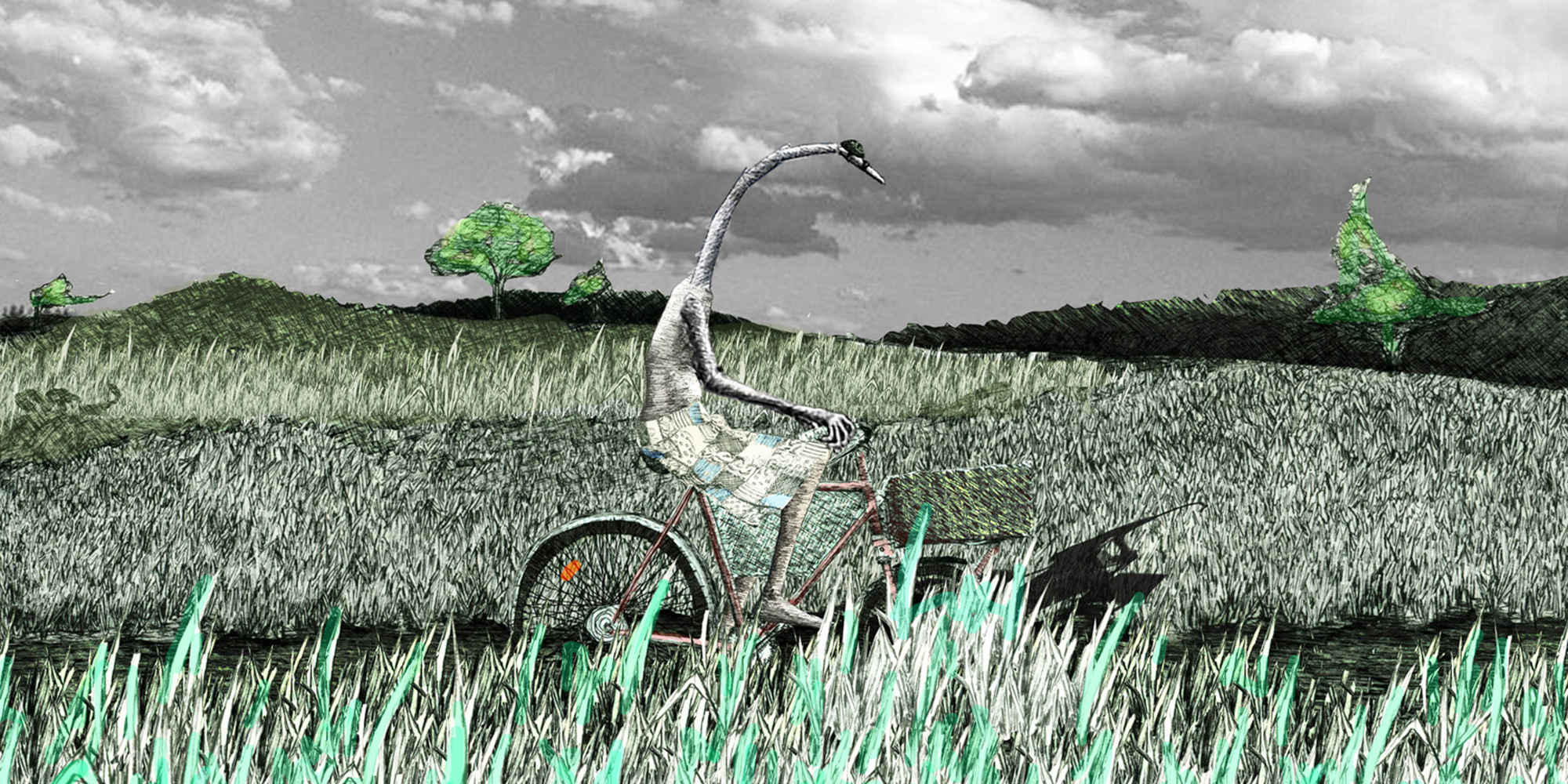 re.riddle, Versia Harris: Image still from They Say You Can Dream A Thing More Than Once, 2013. Animation, illustration and photography.
Credit: Versia Harris 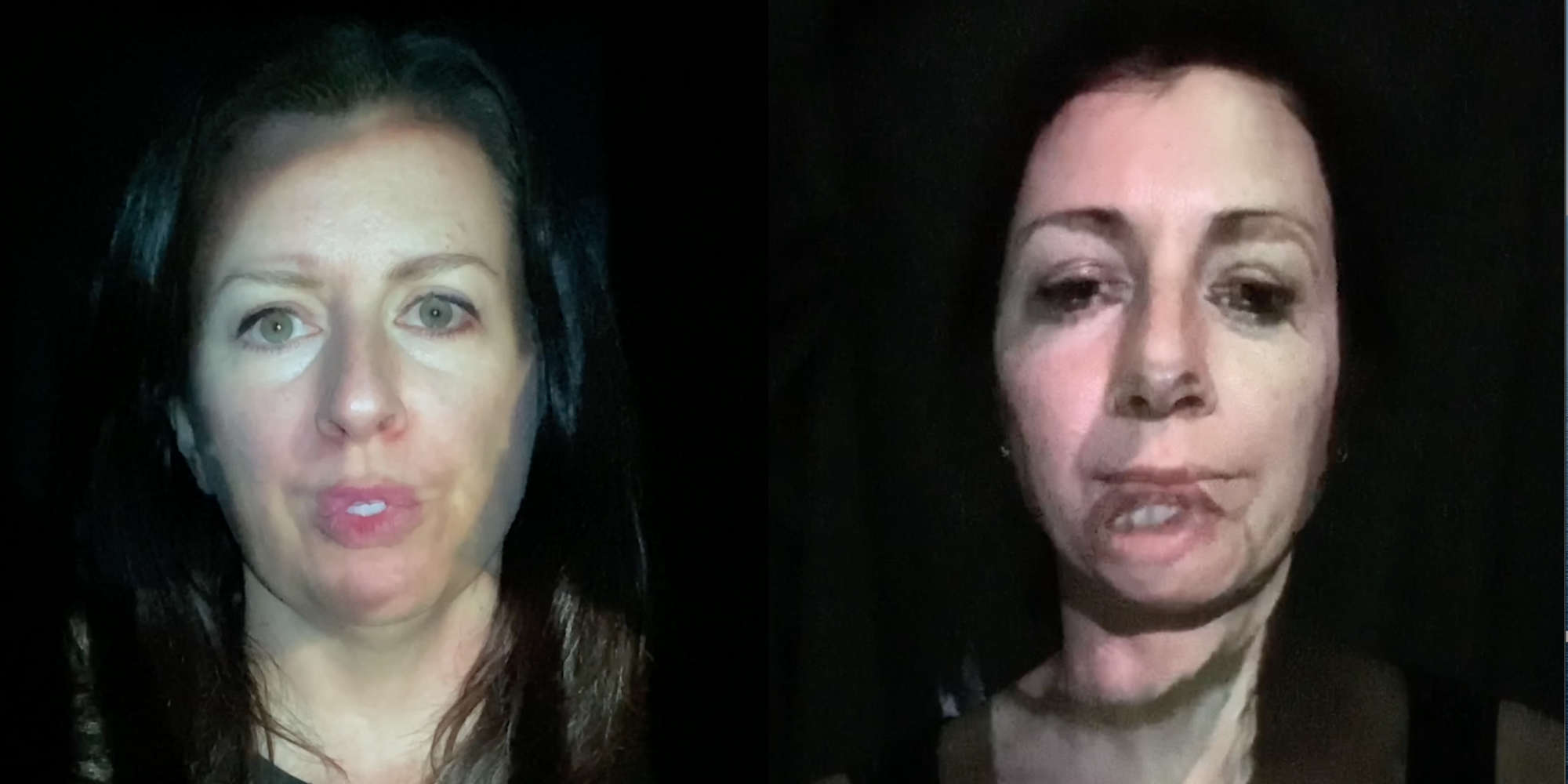 I have been having a series of online chats with people where we make plans for a “later date,” when we are able to go outside again, and fantasizing about being in the same space as other people. Reaching out and touching. Shared surfaces. Breathing, talking…anything really. This is a performance in two parts. In the first one, we chat and imagine our first meeting. Where will we go? What will we do? What will we say? This future plan gets saved as a sort of script. One day, when we are allowed out again, they will receive a request to meet and we will enact this script. This will be part two of the performance.

Not that the pursuit of orientation is something new for Michail Michailov. But because of the worldwide covid19 shutdown, everyone suddenly loses their bearings, and nobody knows how the future will go. New thinking and new ideas are needed. Michailov lands lost and with hope at the same time on his rooftop, roams around and searches for new directions…

„A season in hell a ghostly city by night an echo of themselves like shadows through a mirror the landscape rose slowly before us a glorious death we don’t need mirrors anymore to talk to ourselves.“ An end. Impasse. The ciné collages, 3 screenings parallel, only in black and white, without tone. The dialogue takes place between the individual scenes. By using different imaging sequences and lengths a new conflict, a new language, a new image is created. Ein Nachtstück is a 3 channel video installation, which is created in great detail from still photographs. Patricia Reinhart uses a technique to make her film loops which she has named ciné-collage.

THEY SAY YOU CAN DREAM A THING MORE THAN ONCE

Versia Harris uses fantasy and world building to metaphorically address the human condition and explore various theories about identity, land, power, political control, acts and ideas of power and media influence. What are our collective fantasies about ourselves, our nations and our world? How are they linked to conflict, struggle and acts of aggression but also beauty, story and triumph?

An Atlas of Absence

Technology was supposed to connect us. The dominant modality for communication and connection during this pandemic era is the digital screen. In this work, collaborators Laura Boles Faw and Summer Mei Ling Lee continue their ongoing series addressing distance and longing that increasingly figures into this heightened moment. Through the Zoom platform, they host an encounter in which guests to the “meeting” confront the artists grappling with the boundaries of absence and presence, here and there, time and the infinite through an arch of emotions and strategies ranging from coincidence to confusion. Through this work, they ask if we can meaningfully meet in a place that documents the deprivation of being together without altering our understanding of closeness and connection.

Summer Mei Ling Lee and Laura Boles Faw began to work together in late 2016 in the Bay Area to address the universal human need for deeper connection. After Boles Faw moved to Philadelphia two years ago, the two have more emphatically and yet poetically critiqued the effects of ever-quickening and often superficial technological communication through performative and often participatory projects and installations.

Lauren Lee McCarthy is an LA-based artist examining social relationships in the midst of surveillance, automation, and algorithmic living. She is the creator of p5.js, an open source programming language with over 1.5 million users, for learning creative expression through code online. She is co-director of the Processing Foundation, a non-profit whose mission it is to promote software literacy within the visual arts, and visual literacy within technology-related fields, to make them accessible to diverse communities. She is an Associate Professor at UCLA Design Media Arts.
Her work has been exhibited internationally at places such as The Barbican Centre, Ars Electronica, Fotomuseum Winterthur, Haus der elektronischen Künste, SIGGRAPH, Onassis Cultural Center, IDFA DocLab, Science Gallery Dublin, Seoul Museum of Art and the Japan Media Arts Festival. She has worked on installations for the London Eye, the US Holocaust Memorial Museum and the Lincoln Center for Performing Arts. She is a 2019 Creative Capital Grantee, a ZERO1 Arts Incubator Resident, a Sundance Institute Fellow, an Eyebeam Resident, and has been in residency at CMU STUDIO for Creative Inquiry, Autodesk, NYU ITP and Ars Electronica / QUT TRANSMIT³. She is the recipient of grants from the Knight Foundation, the Online News Association, Mozilla Foundation, Google AMI, Sundance Institute New Frontiers Labs, Turner Broadcasting, and Rhizome.
She holds an MFA from UCLA, a BS in Computer Science and a BS in Art and Design from MIT.

Michail Michailov lives in Paris and Vienna and his artistic practice is concerned with drawing, performance, installation and video. He studied fine arts in Veliko Tarnovo, Bulgaria, and art history in Vienna. In addition to several residencies and awards, he received the Drawing Now Paris Art Award 2018. Success and failure, self-discovery and self-doubt, the search for happiness, the crossing of boundaries are recurring themes. He uses his own personality as a metaphor for existence, the self and the striving for individual self-realization in a globalized society.

Patricia Reinhart’s artistic practice focuses on video (installation), photography within/and the public space, and painting. The three mediums complement one another by generating a subtle dialogue between the distinct artworks.
Patricia Reinhart was born in Vienna, Austria, and she lives and works in Paris, France. Her work has been shown in numerous solo and group exhibitions around the world, such as at the Fondation d’entreprise Ricard, at Gaité Lyric and Palais de Tokyo in Paris, FR, at Haus der Kulturen der Welt in Berlin, KIT Kunst im Tunnel in Düsseldorf, DE, at the Gallery Kerstin Engholm, the Gallery Dana Charkasi and the Essl Museum in Vienna, AT, and at the Gallery CCA Kunsthalle Mallorca, ES, at the Gallery im Traklhaus in Salzburg, AT, and at Art Basel, Untitled San Francisco, Untitled Miami Beach, Art-O-Rama Marseille, Parallel Vienna, Preview Berlin, Viennafair, among others.

Her artistic work has been selected, already during her study of painting at the Academy of Fine Arts, by the curators Harald Szeemann (1998) and by Kasper König (2000) for the closing exhibitions of the Academy of Fine Arts in Vienna, AT. Patricia Reinhart has received several awards and scholarships, including the “Bau at Camargo Arts Residency Award” from the BAU Institute/USA, the „Master School Award“ from the Academy of Fine Arts Vienna/AT, the “Austrian State Grant for Visual Arts” from the Austrian Federal Ministry of Arts/AT and she is a laureate of the studio grant for painting for Paris/Cité Internationale des Arts 2000 and for the studio grant for photography and video for Paris/Cité Internationale des Arts 2011 by the Austrian Federal Ministry for the Arts, AT. She has participated several times in different artist-in-residence programs and her films were shown during Berlin Art Week, Vienna Art Week, Berlin Art Weekend and Nuit Blanche Paris.

SUMMER MEI LING LEE is a multi-media artist who graduated from Stanford University in 1997 and received her MFA in painting and sculpture from the San Francisco Art Institute in 2011. Recent exhibitions include Minnesota Street Project (San Francisco); Saatchi Gallery, London; Marqueyssac, France; Untitled Art Fair “Monuments;” Chinese Culture Center of San Francisco;  SCOPE Miami Beach (Art Basel); Berliner Liste; Italian Institute of Culture; San Francisco Arts Commission; Yerba Buena Center for the Arts (San Francisco); Southern Exposure (San Francisco); Woman-Made Gallery (Chicago); and Fei Contemporary Art Center (Shanghai). Her recent public art installation, “Liminal Space/Crossings,” funded by the NEA, was a finalist for the Robert E. Gard Award and the subject of a documentary film screened at CAAMfest 2018. Lee was recently interviewed and featured in Hyperallergic magazine for her installation Requiem, which pays homage to Hong Kong’s Tung Wah Hospital’s role in the repatriation of Chinese immigrant bones to China. Lee’s research of the bone boxes in Hong Kong and Taishan, China is featured in a documentary film, Requiem. Her work is in the permanent collection of the Berkeley Art Museum and He Xiangning Museum in Shenzhen, China.

Barbadian artist Versia Harris received her BFA in Studio Art in 2012. She has done a number of residences in the Caribbean and North and South America and has shown in London, China, Nigeria, Moscow, Michigan and Aruba. She was awarded a Fulbright Laspau Scholarship in 2017 and received her MFA at Cranbrook Academy of Art, Michigan USA in May, 2019, where she also earned a Mercedes-Benz Financial Services New Beginnings Award.

LAURA BOLES FAW’s work consists of investigations through sculptures, installations, drawings and mixed-media works. She examines the ways we prop ourselves up in the world and borrows from art historical references in order to create new meanings and transformative fictions. In addition to her solo practice, she collaborates with several artists through discursive and ongoing projects.

Boles Faw received a BA in Art History from Sewanee and an MFA in Sculpture from the San Francisco Art Institute where she held the position of Lecturer in the Sculpture Department from 2012-2018. She recently relocated from San Francisco to Philadelphia.

re.riddle presents unique programming showcased in site-specific exhibitions and pop-up events worldwide. The itinerant gallery curates socially engaging and multidisciplinary exhibitions of contemporary art. Its mission is to contribute to the discourse on contemporary art in thought provoking and playfully subversive ways. Via new modes of production, reception and consumption, re.riddle places an emphasis on the whimsical, in hopes that art continues to arouse curiosity and promote an awareness of its profound impact on our daily surroundings and lives. 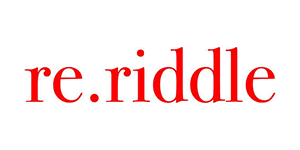