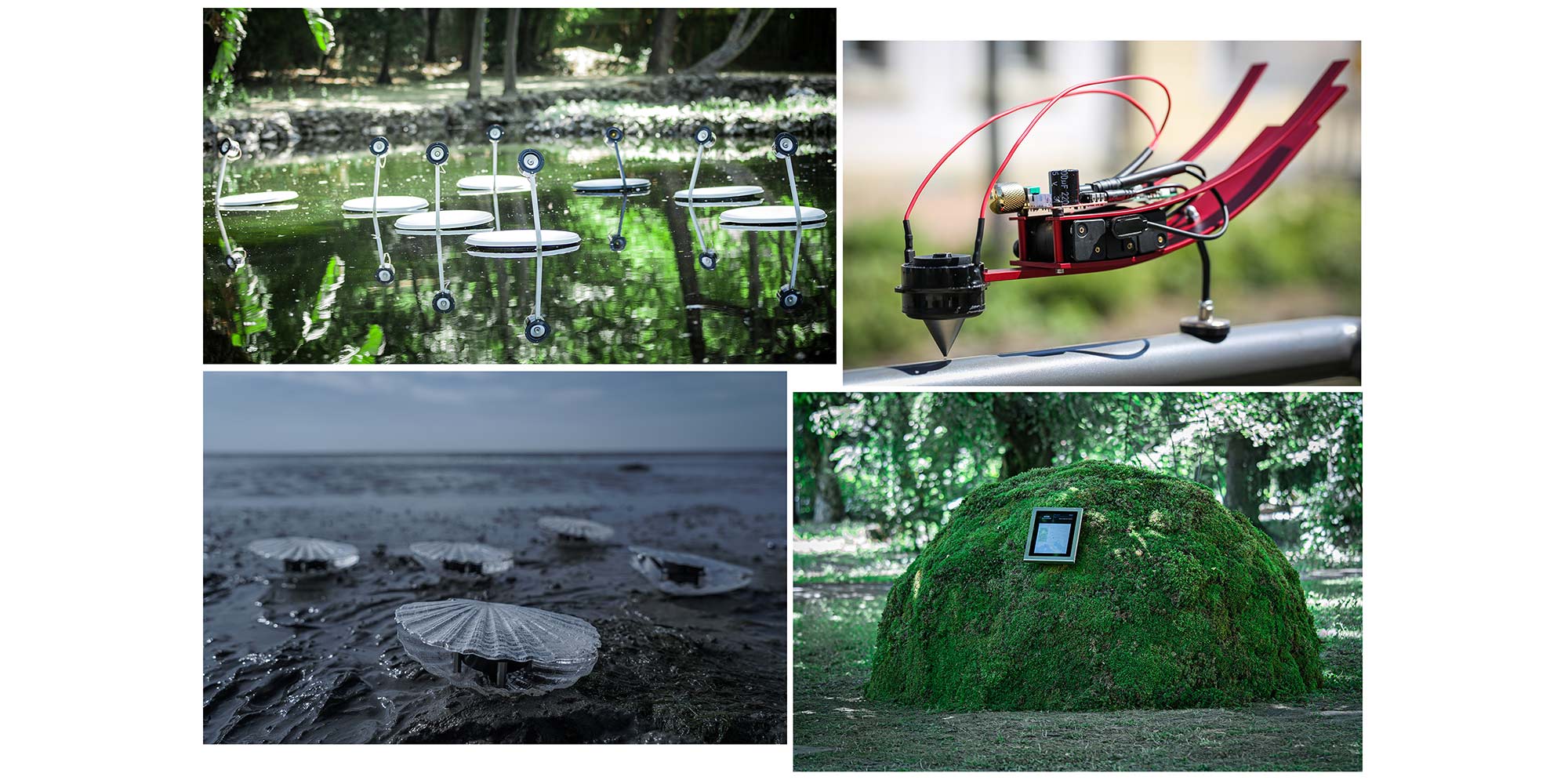 Works in the exhibit

SWANS
Satellite dishes inspired the artist to build SWANS (2015). From afar, they look so peacefully a flock of swans on the river. But suddenly you realize they are floating satellites, though they seem to be alive, as we hear their sounds. The satellite doesn’t perform the original function used by consumers to receive satellite television from a broadcast satellite in geostationary orbit. Instead of channeling mainstream media, speakers are installed above the bases of the former satellite dishes and serve as the animals’ heads. Two layers of sound design consisting of bass frequencies and human breath passing through brass instruments provide them with voice and motion.

WOODPECKER
Electromagnetic radiation has been around since the birth of the universe; light is its most familiar form. Electric and magnetic fields are part of the spectrum of electromagnetic radiation which extends from static electric and magnetic fields, through radiofrequency and infrared radiation, to X-rays. Marco Barotti started to research if he could create a robotic object as a form of creative detection of electromagnetic radiation. How could it react to people sending and receiving electromagnetic radiations through their smartphones? Out of that inquiry, WOODPECKER (2017-2018) was born, data-driven autonomous devices or custom-made robotic birds that serve as detectors of electromagnetic radiations (EMR). The robots are programmed and configured to read various ranges of the (EMR) spectrum and reinterpret these waves with a motion pattern similar to that of a woodpecker. They thus transform the invisible radiation used for mobile communication and wireless technology into audible and visible acoustic drum patterns. The WOODPECKERS are beautifully designed and attached using magnets to street signs, lamps, and other metal components of the urban landscape or attached hitherto onto a natural environment such as trees. The sonic result can be compared to a kind of surround sound that creates an acoustic auto-generated composition in constant development and variation. This results in an infinite soundscape, which plays with the resonances of metal urban objects as an invading drum ensemble adding beats and overtones to the city.

CLAMS
In the audiovisual works of Marco Barotti, there is persistent research into ecology. But more than investigating what sound does to animals, he is looking at how sound waves can trigger innovation for current ecological issues through animal mimicked robotics. Inspired by the natural phenomenon of clams which act as detectors of pollutants, as tiny filtration systems, he created the work CLAMS (2018-2019), a kinetic sound installation triggered by water quality.
Real-time data from the ocean or rivers is captured by a sensor and converted into an audio signal. The audio signal generates a live evolving soundscape, which initiates the opening and closing movements of the CLAMS sculptures. Sound and motion unite to create an experience allowing the audience to see and hear the water quality in real-time. The CLAMS sculptures are made from recycled industrial plastic waste.

MOSS
The central element of the kinetic sound sculpture is a dome overgrown with moss, its movement driven by readings of nitrogen oxide concentrations at various locations on our planet. Moss is regarded as a bio-indicator of air pollution and this forms Barotti’s first collaboration with a living organism. In the course of the project, the artist plans to collaborate with local moss experts, environmental scientists, and moss psychologists in order to make kin along inventive lines of connection.

The work starts out from the observation that since the outbreak of the pandemic, air pollution in many parts of the world has been reduced many times over due to a reduction in people’s mobility. Referring to this, the artist sees the pandemic as an opportunity, since it is making the flaws and shortcomings of human actions and activity more visible. What possibilities are there for a post-pandemic future? Can we hope for a world in which we become aware of our carbon footprint and begin developing strategies to counteract it?

MOSS is a project in residence at the Ars Electronica Garden in Bologna thanks to Sineglossa and Kilowatt, as part of the Resilienze festival, from 9 to 12 September, from 10 to 24:00 (see Program \”Barotti Exhibit\”)

MOSS will be online during the live streaming on Saturday 11th September from 6.00 pm to 6.30 pm

>> FOOTPRINT – Marco Barotti in dialogue with Marco Mancuso (offline event)
September 9th, from 18:30 at the Ars Electronica Garden Bologna, as part of the Resilienze festival. 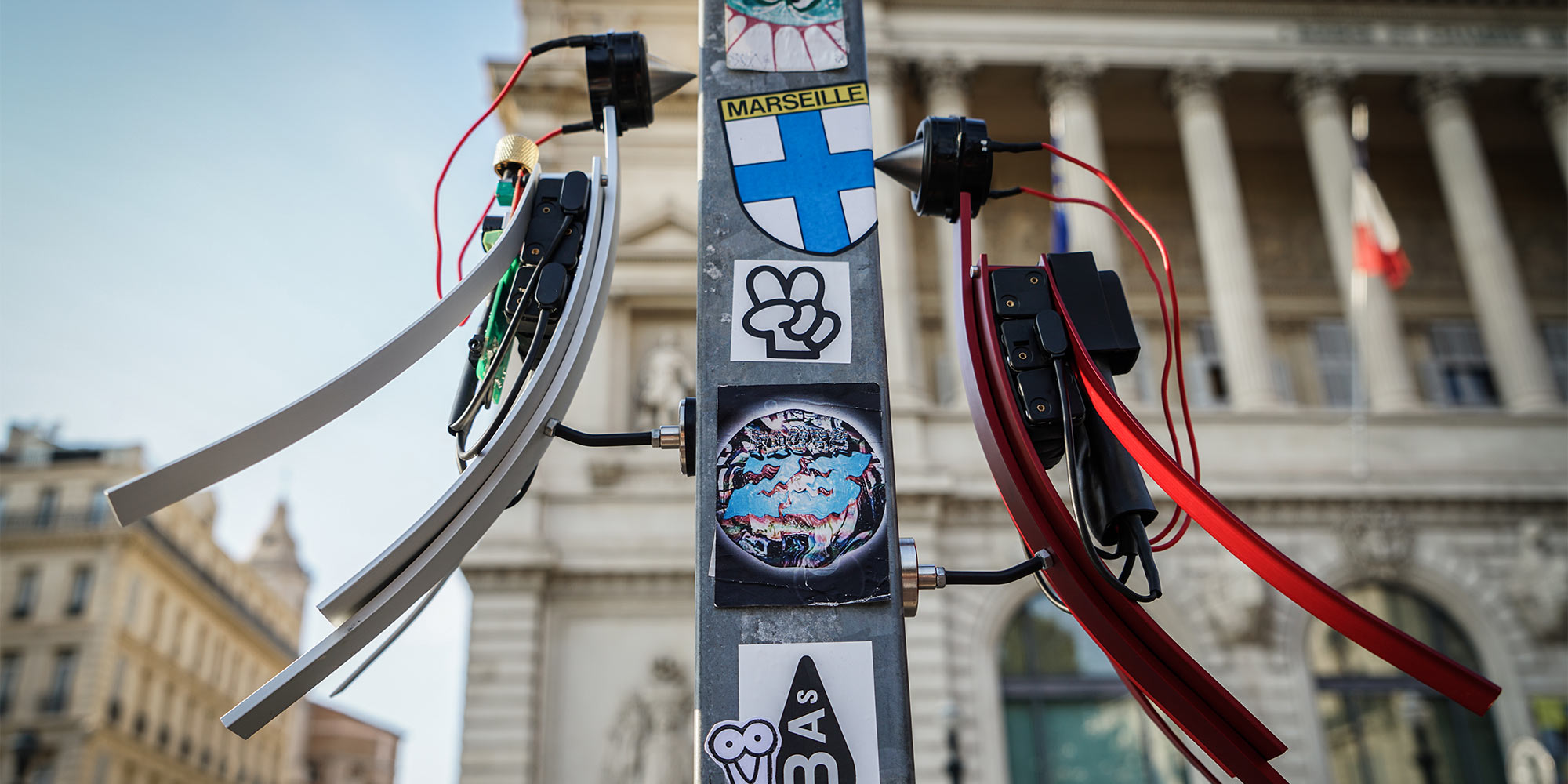 Marco Barotti Exhibit, Marco Barotti (IT), Credit: Marco Barotti (IT)
Marco Barotti: Media artist based in Berlin. His work is driven by a desire to invent an artistic language in which a fictional post-futurist era is expressed through kinetic sound interventions in natural and urban environments. His installations merge audio technology, consumer objects, and waste into moving sculptures triggered entirely by sound. The primary focus of his work is to create a “tech ecosystem” that plays with resemblances to animals and plants. These artworks serve as a metaphor for the anthropogenic impact on the planet and aim to make people aware of environmental issues.

Marco Barotti will be in conversation with the curator and critic Marco Mancuso, who for more than a decade has been carrying out a huge theoretical and academic research on the relationship between art, design, technology and science and – in recent years – on the impact that these cultural elements are having on the human body and its relationship with the surrounding context, intended as a natural, social and relational unicum. Exhibit curated by Sineglossa and Kilowatt.