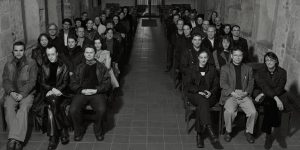 President and founding member of the etoy.CORPORATION. Lives in Zurich and Monza. Since 1995 in the etoy.CORPORATION has initiated and cultivated award winning incubationslike „the digital hijack“ and „TOY-WAR.com“ and controls subsidary companies liek the etoy.HOLDING. Venture capitalists, leading art collections (the Robert Shiffler Foundation and others), institutional investors and many etoy.FANS have invested in this sophisticated corporate structure that generates and increases cultural value by infecting business, entertainment and the art world.

is an independent composer in the fields of computer music and digital production. Involved in various sonic projects simultaneously, such as recording for labels like Mego and Or, his current activities also include audio publishing and interconnection in new formats, e.g. mp3 via the fals.ch web project, cd_slopper, and visual abstraction with SKOT.

studied telematics at the technical University of Graz and worked as a freelance developer of realtime control systems as well as working for art projects. Co-founder of the group „x-space“. He has worked for EXPO Sevilla, documenta IX, austromir, etc. Since 1995 he is technical director of the Ars Electronica Center in Linz and director of the AEC Futurelab.

is a studio composer specializing in acousmatic works. His teachers included Kevin Austin and Francis Dhomont. Attracted by cinema, contemporary visual art and science fiction, he tries in his work to balance form and content, while leaving room for emotion and poetry. Presented in concert and on radio in many countries, his works have won him several national and international prizes. Active in the poromotion of electroacoustic music in Montréal since 1987, he participates in concerts as a composer and host (ÉuCuE, ACREQ), on radio as a host and performer (CKUT-FM, Radio-Canada), in community work (president and editor for the CEC), and in academic duties (teacher at Concordia University, 1991-96). Recently, he has composed music for a varitey of media (cinema, television, internet)

Studied piano with Renate Werner, Allan Marks, Alexander von Schlippenbach and others. In Stuttgart and Berlin he studied mathematics and musicology (with C. Dahlhaus, Helga de le Mottè, and others). As an interpreter / performer / composer he has received various scholarhips, including from eurocréation Paris France, the Rome Scholarship (Villa Serpentara) of the Academy of Arts Berlin, a working scholarship for STEIM Amsterdam, and also various composition commissions. Reinhold Friedl also heads a seminar together with Prof. Behrends on „Music and Mathematics“ in the specialization field of mathematics at the Free University Berlin. He founded and leads the ensembles Piano-Inside-Out and zeitkratzer. In addition, Friedl works regularly as a curator for the Podewil Berlin and directed the Off-ICMC in Berlin in 2000.

is the director of RECOMBINANT MEDIA LABS which incubates or expands international sonic cinematic projects for mobile performance exhibitions. He conducts, curates and artistically contributes to the facility’s orchestral „dub dashboard“ AV system: Surround Traffic Control. This spatialized media network recombines sound driven optic image configurations for realtime multichannel audio/video arrays. A number of these operations have been produced for his other San Francisco activity on Asphodel Records during the recent years.

has been making and performing new musics via all kinds of digital gadgetry all over the world for the past ten years. She is most known for her live sampling performances of events and places in real time: processing in installation, on stage, in galleries, clubs, concert halls, tents, curches, the outback, warehouses, or ambient tea rooms. In her works she is sampling sonic snatches from the venue and around, reprocessing in lines and pulsing slo-tones, playing inside a circle of speakers with the audience. She just released her 4th solo work, „cd dd“.

is Digital Effects Supervisor. The films, for which he has been responsible for visual effects, include Chicken Run , Sleepy Hollow, The Legend of Ocean Pianist, Mission Impossible II and Little Buddha. For the digital effects in the ad Guinness Surfer, he received an Honorary Mention from the Prix Ars Electronica 1999.

joined Industrial Light & Magic in 1993 as a senior technical director on The Flintstones. Christophe majored in architecture and electricity at École Supérieure des Travaux Publics, where he received his degree in 1989. While a student in Paris he freelanced as a technical director at BUF, a special effects house, as well as Thomson Digital Images, where he worked on 3D software development in his spare time. After graduation, Christophe took a job as director of research and development at Label 35, a Parisian cartoon studio. Christophe recently completed working as a computer graphics supervisor on Mission to Mars.

joined Pixar Animation Studios in 1987. He developed warping, painting, image processing and shading tools, and served as Technical Director and production software developer as the studio began commercial production. His feature credits include Toy Story, Toy Story 2 and A Bug’s Life, for which he was nominated for a British Academy Award. Rick has also been involved extensively in theater and interactive art, and drew from this experience to develop an innovative animation input device, for which he received a SciTech Academy Award. He is currently Supervising Technical Director on Monster’s Inc., in production for release in 2001.

is a filmmaker and graduate of the École Supérieure d’Arts Graphiques. He has made two short films and several animation clips, which refect his experience as a painter, graphics artist and photographer. At Prix Ars Electronica 2000 he has been awarded a Golden Nica in the category „Visual Effects“ for his film Maaz.

born 1956; Board member of Japan Animation Film Association, since 1987 Member of ASIFA, since 1990 Associate Professor, Faculty of Environmental Information at Keio University. Since 1998 Professor at Keio University, Faculty of Environmental Information; since 1999 Professor at National University of Fine Art and Music, Inter Media Art course. Masaki Fujihata’s awards include a Golden Nica by the Prix Ars Electronica jury for his entry Global lnterior Project in the category Interactive Art (1996).

media artist, has been developing her own software for interactive installations since the early nineties. She has studied and worked at the Institute for New Media in Frankfurt a. M. and at the Art College for Media, Cologne, and others. With her own media lab, Codelab Berlin, she cooperates with the College of Arts , Berlin, the Technical University Eindhoven, and will take part in the artist in residence program of Podewil, Center for Current Arts, Berlin, in 2001. Ulrike Gabriel has taken part in exhibitions in Europe, North America , Australia and East Asia.

trained at the Architectural Association and worked as a scenographic designer in West End theatre and for BBC TV. In 1992 he was co-founder of Land Design Studio, who are interpretive designers working with lottery based projects and museums throughout the UK. Most recently they have been responsible for The Playzone at The Millennium Dome London, which publicly demonstrates the extraordinary potential of interactive digital art.

His focus is on media design to augment interactions between humans, computers, and the physical environment. He has done extensive research on Computer-Supported Cooperative Work [CSCW] and Human-Com puter Interaction [HCIL] His team at NTT Human Interface Laboratories invented TeamWorkStation and ClearBoard . He has been active in the ACM SIGCHI community. At the MIT Media Lab, he directs the Tangible Media Group.

born 1959, MA in communication design at the University of the Arts, Berlin, further studies at the German Academy for Film and Television, Berlin. He has been using computers from the early stages of his work as a designer and filmmaker. Fueled by his interest, he founded Art+Com, an independent design and research group in 1988 together with other designers, scientists and technicians. Today he is head of Art+Com e.V. He has been awarded a Distinction in the Prix Ars Electronica 92 and 97 (Interactive Art), as well as the Los Angeles Interactive Media Festival Impact Award in 1995 and the Prix Pixel INA in 1997.

is co-founder of the cutting edge new media agency www.kerb.co.uk, a design-led company creating funky websites in html, Shockwave Director and Flash. Kerb are known especially for their expertise in youth marketing, and viral campaigns. In September 2000 Kerb scooped the prestigious web agency of the year prize at the Future UK Internet Awards.

is professor for interface design at the Anhalt College in Dessau. She is a specialist for generic interfaces, modular systems, navigation systems and digital CI. She defined „Navigable Structures“ as an interface principle.

has been active as curator of media art and in promoting media art while also doing research on the relationships between art and such liminal regions in science and technology as telecommunications and artificial life. Her major concern is what digital technology offers the human imagination . Her publications include CG Anthology, CG Access, and the Hyper Image Museum on CD-ROM. Formerly an assistant professor in the Tokyo Institute of Polytechnics‘ Faculty of Art, she is now an assistant professor in the Graduate School of Science and Technology, Kobe University.

is a Paris-based new-media label dedicated to digital culture & lifestyle. Founded in 1995 by Tina Cassani and Bruno Beusch, TNC Network has developed ground-breaking concepts and events for the Internet, TV/radio, museums, and festivals in Europe, Japan, and the US. It specializes in the design of new-style conferences & shows for the digital generation, such as the Electrolobby showroom for digital culture & lifestyle at Ars Electronica. In 2001 TNC was commissioned to redesign the Internet category of the Prix Ars Electronica, where Beusch/Cassani acted also a Jury members.