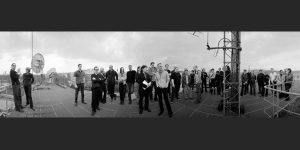 Sirikit Amann studied political science, theater arts and economics in Austria, Germany and USA. Since 1987 she works for the ÖKS (Austrian Cultural Services) where she is responsible for the concept development and implementation of multimedia projects in schools.

Horst Hörtner studied telematics at the Technical University of Graz and worked as a freelance developer of realtime control systems as well as for art projects. Co-founder of the group „x-space“. He has worked for EXPO Sevilla, documenta IX, austromir, etc. Since 1995, he is technical director of the Ars Electronica Center in Linz and director of the Ars Electronica Futurelab.

Barbara Lippe studied MultiMediaArt at the Academic College Salzburg. Volunteer as designer at Furifuri, Tokyo. Participant at Electrolobby-GameJam Ars Electronica (2000). Studies for a PhD at the University for Applied Arts / Vienna. Engaged in the organization of concerts and events in the WUK (Werkstätten und Kulturhaus, Vienna). 2002: Performancetour with the Japanese ClubLounge Band Oypthone.

miss monorom etoy.MONOROM encountered etoy.CORPORATION in 1998. Since 2000 executive manager of the etoy.VENTURE-CAPITAL group. miss monorom is one of the outstanding figures of the post-boy-group-era and is a major contributor to the renewal of etoy.STYLE and to the opening of the etoy.CORPORATION. Her focus: corporate identity, screen-, fashion- and service-design as well as quality-control and human resources management.

Bevin Blectum (Bevin Kelley) is part of Blectum from Blechdom, a Laptop Performer Duo. She has been trained as a violinist but changed to the electronic music program. She now performs as well alone and with Kevin Blechdom (Blectum from Blechdom) as with several musicians and performers at festivals mainly in USA.

Florian Hecker, musician. His various styled computer music has been released mainly on the independent record companies MEGO and OR. He also is a member of the computer music band „cd_slopper“ together with Oswald Berthold, and did live collaborations with Marcus Schmickler, Russell Haswell, Merzbow, and the swiss band Voicecrack. Recently he did sound design and processing for Holger Hiller.

Tony Herrington is a journalist specialising in new music and related culture. He joined the editorial staff of the London-based contemporary music magazine The Wire in 1992 and is currently the title’s editor-in-chief & publisher. He has been an advisor to the music department of the London Arts Board and a visiting lecturer at the Bauhaus University in Weimar. He first sat on the jury of the Digital Musics category of the Prix Ars Electronica in 2001.

For over 20 years, STC creator, curator and conductor Naut Humon has been staging underground events which have inverted and blurred the roles of audience and participant. Naut Humon was the primary catalyst, producer, arranger and performer of Rhythm and Noise. He founded Sound Traffic Control in 1991. Throughout the years, along with his own electro- acoustic excursion and products Naut has collaborated with dozens of artists and musicians of numerous influences, disciplines and styles.

Chris Watson is a sound recordist with a particular and passionate interest in recording the wildlife sounds of animals and their habitats in wild places around the world. Born in Sheffield, England, Chris worked in music production from 1972-1981 with the group „Cabaret Voltaire“. In 1981 Chris joined Tyne Tees Television in Newcastle-uponTyne and worked e.g. with Sir David Attenborough. His CD Outside The Circle of Fire won a special jury prize at the Prix Ars Electronica 2000.

Bill Buxton is a designer and a researcher concerned with human aspects of technology. He is Chief Scientist of Alias/Wavefront, Inc., and its parent company SGI Inc., as well as an Associate Professor in the Department of Computer Science at the University of Toronto. He received the Canadian Human-Computer Communications Society Award in 1995 and the New Media Visionary of the Year Award at the 2000 Canadian New Media Awards.

Stuart Maschwitz has been a visual effects artist at Industrial Light & Magic and founded – together with Jonathan Rothbart and Scott Stewart – also ex-Industrial Light and Magic special FX men, the independent film and production company The Orphanage.

Since 1985 Barbara Robertson has watched the evolution of computer graphics art and technology. She is senior editor for Computer Graphics World. Her articles on computer animation, visual effects and computer graphics art and technology have won numerous awards. Barbara Robertson has been member of the Prix Ars Electronica Jury in the category Computer Animation / Visual Effects since 1998.

Rick’s artistic background is in theatre and interactive art. At Prix Ars Electronica 91 he has been awarded together with Chico McMurtrie a Distinction in the category of Interactive Art for their work Tumbling Man. He drew from this experience to develop an innovative animation input device, for which he received a SciTech Academy Award. In 1987 he joined Pixar Animation Studios where he developed warping, painting, image processing and shading tools. His feature credits include Toy Story, Toy Story 2, and A Bug’s Life, for which he was nominated for a British Academy Award.

Rita Street has been an editor for Film & Video Magazine and a Founder and President of the non-profit organization „Women In Animation, Inc.“ She is also the author of the book Computer Animation: A Whole New World. She got her start in publishing at Animation Magazine and was later promoted to Publisher. She has been to SIGGRAPH for several times and has been publishing books worldwide. Besides her journalism job and her writing she has another big passion: rock climbing.

Alex Adriaansens was active as an artist working in the field of mediatechnology. He is currently the director of V2_0rganisation, and organizer of DEAF (Dutch Electronic Art Festival). He has served on the advisory board of the Berlage Architecture Institute, the editorial board of ARCHIS – an digital culture & lifestyle magazine for art and architecture. Member of the committee for the Foundation for Visual Arts, Architecture and Design which supports individual artists.

Peter Higgins has been trained at the Architectural Association and worked as a scenographic designer in West End Theatre and for BBC TV. In 1992 he was co-founder of Land Design Studio, who are interpretive designers working with lottery based projects and museums throughout the UK. They have been responsible for The Playzone at the Millennium Dome Landon, which publicly demonstrated the extraordinary potential of interactive digital art.

Hiroshi Ishii received a B.E. degree in electronic engineering and M.E. and Ph.D. degrees in computer engineering from Hokkaido University, Japan. He joined the MIT Media Laboratory as an Associate Professor of Media Arts and Sciences in October 1995. He directs the Tangible Media Group at the Media Lab. He is active in the research fields of Human-Computer Interaction (HCI) and Computer-Supported Cooperative Work (CSCW).

Pete Barr-Watson is the founder of Pixelfury, an interactive design company in the UK whose clients include EMI Music, Channel 4 and Macromedia. Prior to Pixelfury he was founding director of Kerb, an award winning UK design company that he helped propel into the Web design stratosphere. Barr-Watson is also a contributor to „New Masters of Flash 2002“ and is currently writing a new book on the use of Flash in a broadcast environment. He is a two time jury member for the Prix Ars Electronica.

Joshua Davis is an artist and technologist producing both public and private work on and off the Web. His site www.praystation.com was the winner of the 2001 Prix Ars Electronica Golden Nica in the category „Net Excellence“. He is currently an instructor at the School of Visual Arts in New York City and lectures globally on his work, inspirations and motivations.

Tanja Diezmann is professor for interface design at the University of Applied Sciences Anhalt in Dessau, co-founder and managing director of the pReview digital design gmbh, berlin. She formulated the principle of „navigable structures“ as a new method of developing interfaces for complex systems. Her work is focused on designing new navigation systems / interfaces for the digital space, such as sense controlled interfaces, behaviour based interfaces, interfaces by physical phenomenons.

Joichi Ito, founder and CEO of Neoteny, an IT investment and operating company. He has created numerous Internet companies including Digital Garage and Infoseek Japan. In 1997 Time Magazine ranked him as a member of the CyberElite. In 2000 he was ranked among the „50 Stars of Asia“ by Business Week and commended by the Japanese Ministry of Posts and Telecommunications for supporting the advancement of IT. In 2001 the World Economic Forum chose him as one of the 100 „Global Leaders of Tomorrow“ for 2002.

Tina Cassani / Bruno Beusch (TNC Network) is a Paris-based new-media label dedicated to digital culture & lifestyle. Founded in 1995 by Tina Cassani and Bruno Beusch, TNC Network has developed ground-breaking concepts and events for the Internet, TV / radio, museums and festivals in Europe, Japan, and the USA. It specializes in the design of new-style conferences & shows for the digital generation, such as the Electrolobby showroom for digital culture & lifestyle at Ars Electronica. In 2001 TNC was commissioned to redesign the Internet category of Prix Ars Electronica.