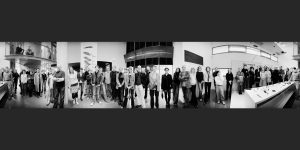 Mark Dippé joined Industrial Light & Magic in 1988. He was one of the creators of the Pseudopod in The Abyss and the liquid metal man in Terminator: Judgment Day2, as well as the dinosaurs in Jurassic Park. He has also created computer animation for several major motion pictures including Back to the Future, Part II, The Hunt for Red October, Ghost, The Flintstones, and others. Mark left ILM to direct the feature film Spawn. He is currently finishing production on the animated picture Sharkbait

Sabine Hirtes studied visual communications in Aachen and completed a course in computer graphics. After graduating, she worked as a 3D/2D artist from 1989 onwards. She became an assistant for digital image design at the Film Academy in Baden-Württemberg in 1993. She worked as a freelance 3D/2D artist on the side and taught abroad. In 1997 she transferred to the ZKM-Center for Art and Media—in Karlsruhe for two years. After a spell abroad and gaining experience as an art director in the field of 2-D and 3-D computer graphics, she joined the Institute of Animation at the Film Academy in Baden-Württemberg in 2002.

Dietmar Offenhuber graduated in architecture at the TU Vienna and worked as a key researcher at the Ars Electronica Futurelab. In 2004 he received a Fellowship from the Japan Foundation for the IAMAS Institute. From 2004 to summer 2006 he was professor for animation and interactive media at the University of Applied Sciences in Hagenberg (AT) and is now researcher at the MIT Medialab.

Rick Sayre joined Pixar Animation Studios in 1987. He developed warping, painting, image processing and shading tools, and served as Technical Director and production software developer as the studio began commercial production. His feature credits include Toy Story, Toy Story 2, A Bug’s Life (for which he was nominated for a BAFTA for Visual Effects), Monsters, Inc. and The Incredibles.

Shuzo John Shiota joined Polygon Pictures in 1999, where he spearheaded the company’s transition from a boutique studio to a full-capacity animation services studio. Polygon now houses 60 artists and is renowned worldwide for its animation prowess as well as for its efficient production pipeline. Shuzo was appointed president CEO of Polygon in June 2003.

AGF aka Antye Greie identified herself as a vocalist, musician, writer and producer: re-ordering the left overs of e-poetry [a work in progress]. She was born and raised in East Germany and since 1996 is permanently based in Berlin. She developed an early interest for music, poetry and philosophy. Recently she has been exploring the role of speech and the spoken word in electronic music, sound installations, pop songs, calligraphy and in the world wide web.

Naut Humon is the director of operations for the Recombinant Media Labs in San Francisco. This network of A/V based actions houses the Surround Traffic Control Cinesonic system for performance exhibitions and international residencies. He is also producer and curator for the Asphodel label along with his own projects for speaker-screen installations.

Elisabeth Schimana works as a no-singer, performer, composer, radio artist and artistic process manager in an electronic environment. She founded the IMA (Institute for Media Archeology) in 2005.

Rob Young is editor-at-large of The Wire magazine, and a writer and broadcaster who contributes to The Guardian, Uncut, Frieze and Resonance FM. He is the editor of Undercurrents: The Hidden Wiring Of Modern Music (Continuum Books 2002) and is currently working on an illustrated biography of Warp Records.

Masaki Fujihata is a media artist and professor at the Graduate School of Film and New Media and at Tokyo National University of Fine Arts and Music. He started his career as a digital artist for Computer Graphics and Animations in the early 80’s. In the late 80’s, he produced Computer Generated Sculptures and then, in the early 90’s, he entered the field of Interactive Arts. From then on he focused on the GPS technology (Field-Works). Between 2003 and 2005 in a series of shows at Art Space Kimura, Tokyo, he focused on reconfiguring the visual system using panoramic camera, virtual mirror, and laser scanning system.

Karin Ohlenschläger is codirector of the I. International Festival of Art, Science and Technology, Cibervisión 02, as well as of MediaLab Madrid (Conde Duque Cultural Centre, Madrid). She is director of Chips: emergent circuits of digital culture, European Institute of Design, Madrid (2001). She has also been director of Cibervisión 99, at the Madrid’s Universidad Rey Juan Carlos (1999), the International Festival of Infoarchitecture, Madrid (1997) as well as IN ART-International Cybernetic Art Festival, Teneriffe (1996), and the International Cideo Forum at the former Spanish Museum of Contemporary Art in Madrid (1986-88).

Joachim Sauter is a media designer and a media artist and a founding member of ART+COM. He is professor for media design and media art at the Art University in Berlin and at the UCLA Los Angeles.

Ingvar Söjberg is the Artistic Director and Head of an Art and Technology program at the Interactive Institute and is professor of Fine Art.

Pamela Winfrey joined the Exploratorium in 1979 and began working in arts programming in 1986. Recent exhibitions organized by Winfrey include Reconsidered Materials (2006), Art Life (2004), an exploration of artworks with human and living attributes, Animal Magnetism (2003) and The Prepared Exploratorium (2001), in which musicians and sound artists turned the Exploratorium into a giant instrument. She is also a founding member of Mobius Operandi, an electro-acoustic sound sculpture ensemble since 1991.

Marko Ahtisaari is the Director of Design Strategy for Nokia. Prior to working at Nokia, he developed mobile applications for major clients at the design consultancy Satama Interactive. He studied economics, philosophy and musical composition at Columbia University, New York City and continues to make music. He was awarded a Grammy Showcase Award for new artists.

Markus Seidl (AT) a.k.a mexx. After working behind the wheels of steel and having been a member of the rap posse “flavour force” Markus Seidl moved over to several attempts to interweave “real” public space with virtual public space, working mainly with the Stadtwerkstatt, Linz and the Kunstradio, Vienna. He has been working on fundamental radio with his long term collaborator August Black since 1996.

Yukiko Shikata is an independent media art curator and critic based in Tokyo, actively engaging in media art projects especially with social and public interest. She works as a curator of NTT InterCommunication Center, and as a specially assigned professor at Tokyo Zokei University. She is a guest professor at Tama Art University, Kyoto University of Art and Design and lecturer at Osaka Seikei University. She is a curatorial advisory board member of Transmediale (Berlin).

Eva Wohlgemuth realized several landart and concept projects before she profiled as a media and web-artist. She is now producing in the field of reactive visual systems: installation (sculpture, draw, paint) and media. Eva Wohlgemuth received several prizes and took part in selected exhibitions, amongst them the Documenta X (Web Section).

Steven Clift is an online strategist and public speaker focused on the use of the Internet in democracy, governance, and community. For the last decade, he has worked to fundamentally improve democracy and citizen participation through the use of the Internet. One of world’s leading experts on e-democracy, he is actively networking people around the world determined to make a difference with this new media.

Andreas Hirsch is a specialist in conceiving and engineering cultural systems. He has completed two decades of work for leading cultural organizations in the arts, theatre, music, film, literature and the media, including conceptualizing and curating as well as developing and managing projects. He has created numerous media environments and online projects.

Lara Srivastava is ITU New Initiatives Programme Director with the Strategy and Policy Unit (SPU) of the International Telecommunication Union (ITU) in Geneva (Switzerland). She is currently responsible for monitoring and analyzing trends in information and communication technology, policy, and market structure.

Sirikit Amann studied political science, theater arts and economics in Vienna, Munich and Boston. Since 1987 she has been working at the ÖKS (Austrian Cultural Service, now KulturKontakt Austria) and has participated in national and international projects centering on new media in art and culture with a special emphasis on e-learning and with a particular focus on young people.

Gerlinde Lang has been working for fm4, a radio station for youth and culture, since 1998. She is presenter of the magazines “connected”, “update” and “homebase”, and author of the fashion column “glamorous”. She is head of the information technology department, called “digital underground”, which also broadcasts “IT news” on fm4 every afternoon

Christopher Lindinger studied computer science at the Johannes Kepler University in Linz. He developed educational software and control software for large industrial plants unitl 1998. He has been a freelance developer of virtual environments, computer graphics and computer vision at the Ars Electronica Futurelab since 1998, and head of its Virtual Environments research group since 2001.

Stefan Pirker is studying at the University of Art and Industrial Design (sculpture). He is member of the artists’ group bu’nostik.

Wilhelm Burger is the director of Media Technology and Design at Hagenberg Polytechnic University. He studied computer science at the Johannes Kepler University in Linz, the University of Utah and the University of California at Riverside. Before his appointment as director, he worked as a developer of visualization software for ultrasound equipment, and as a researcher and developer of visionbased navigation for autonomous land vehicles.

Horst Hörtner studied telematics at the Technical University in Graz. He has worked on developing real-time control systems and on art projects. He is the co-founder of the group x-space and has worked for the Seville EXPO, documenta IX, austromir and others. Since 1996 he is the director of the Ars Electronica Futurelab in Linz.

Daniela Pühringer is working in the communication department of the VOEST-Alpine. Her emphasis is on the organization of the VOESTIVAL, which is a major cultural event in Upper Austria

Christa Sommerer is an internationally renowned media artist working in the field of interactive computer installation. She is currently Professor for Interface Cultures at the University of Art and Design in Linz, Austria and at the IAMAS International Academy of Media Arts and Sciences in Gifu, Japan.