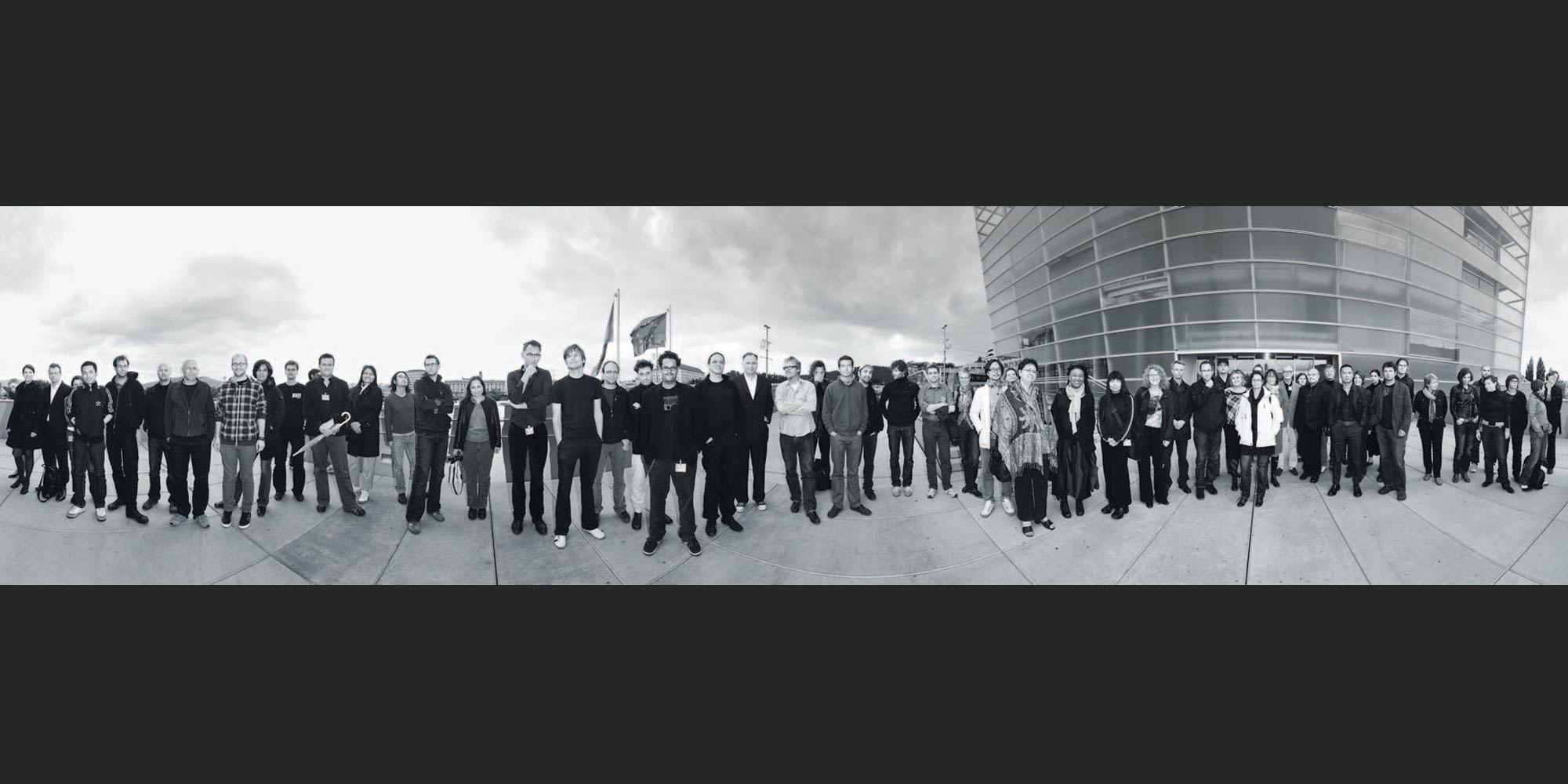 Shuzo John Shiota is President/CEO, Executive Producer, Polygon Pictures, Inc. He joined Polygon Pictures (Polygon) in 1999, and spear-headed the company’s transition from a boutique studio to a fullcapacity animation service studio. Polygon has created CG animation for films such as Innocence: Ghost in the Shell and Sky Crawlers, and is currently animating 65 episodes of an Emmy-nominated TV series. In 2008, Shuzo was chosen as one of the “25 Toon Titans of Asia” by Animation Magazine.

Markus Kurtz has been manager of production technology at Rhythm and Hues Studio in Los Angeles since 2007. He previously worked as a digital effects supervisor. His many film credits include Happy Feet and Superman Returns. After completing his studies at Linz’s University for Art and Industrial Design in 1996, Kurtz succeeded in making the big leap into the digital domain, Los Angeles, where he has been involved in several high-profile Hollywood productions.

Chris Bregler is an associate professor of computer science at NYU’s Courant Institute. He received his MS and PhD in Computer Science from U.C. Berkeley in 1995 and 1998 and his diploma from Karlsruhe University in 1993. Prior to NYU he was on the faculty at Stanford University and founded the Stanford Movement Group and the NYU Movement Group, which does research in vision and graphics. He received the Olympus Prize for achievements in computer vision and AI in 2002, and was named a Sloan Research Fellow in 2003.

Anezka Sebek is Director of the Parsons MFA in Design and Technology Program. Before turning to teaching, her extensive professional career in the film industry included projects for television, advertising, documentaries and feature films for such companies as Kleiser-Walczak, R/Greenberg Associates, HBO, and Curious Pictures. She is best known as a visual effects and computer animation producer for technologically complex projects that combine live-action with digital effects.

Jürgen Hagler studied art pedagogy and experimental visual design at Linz Art University. He has worked in the field of computer animation for over 10 years including stints at the Ars Electronica Futurelab and Art & Tech Institute Linz. He is also an author for the Digital Media for Artists e-learning platform, and has taught classes in 3D computer animation at Vienna’s Academy of Graphic Arts and Linz Art University. He is currently head of the Animation Department at Hagenberg University of Applied Sciences.

Rupert Huber is a freelance composer. He integrates space and the electronic and/or psychological projection of musical or tonal content into his compositions. He has not only implemented his ideas artistically; he has also applied them to music composed for film, TV and radio. Together with Richard Dormeister, he founded Tosca in 1994. Piano music and sound installations in public spaces (www.ruperthuber.com/turmgesang; European Soundscapes, Salzburg, 2006) are among Rupert Huber’s main areas of interest.

Sabine Breitsameter is a curator, editor, author and designer working with audio-medial and electro-acoustic art forms. As an author, editor and producer of cultural radio programming at Germany’s ARD network, she has curated numerous festivals and symposia. She is professor of sound design and production/media arts and sciences in Darmstadt Technical College’s media program and is also guest professor of experimental sound design at Berlin’s University of the Arts.

Daito Manabe is an artist, programmer and designer. After working as a system engineer and a programmer, he graduated from IAMAS (International Academy of Media Arts and Sciences) in 2004. Redefining the existent media and technologies from unique angles, he has been active in the various fields, such as art, design, and even research and development.

Pamela Z is a composer / performer who makes solo works combining a wide range of vocal techniques with electronic processing, sampled sounds, and The BodySynth™ gesture controller. She has also composed scores for dance, film, and new music chamber ensembles. She has toured throughout the US, Europe, and Japan in concerts and festivals. Her numerous awards include a Guggenheim Fellowship, the Creative Capital Fund, the CalArts Alpert Award, the ASCAP Award, and the NEA/ JUSFC Fellowship.

Rogelio Sosa is a sound artist, composer and curator of sound art and experimental music. Since 2004 he is part of the improvisation duo punto pig, professor of the Claustro de Sor Juana University, and director of the Radar Festival in Mexico City. He has curated projects for the Decibel Festival, Transitio_mx 02, Instrumenta Oaxaca, La Habitacion del Ruido, and the Rawbits festival in Chicago among many others. He was curator of Ex Teresa Arte Actual from 2005 to 2007.

Zhang Ga is a media artist / curator and professor at the Academy of Art and Design of Tsinghua University in Beijing and adjunct professor at the Design and Technology Department of Parsons the New School for Design in New York City. He is consulting curator of media art at the National Art Museum of China, senior researcher at the Media and Design Lab of EPFL | Federal Institute of Technology Lausanne in Switzerland, and visiting scientist at the MIT Media Lab.

Tomoe Moriyama is a media art curator at the Museum of Contemporary Art, Tokyo (MOT). Since 1989, she has organized over 30 exhibitions on media art and pre-cinema history and mainly working for new-media art and the history of visual devices, at the Tokyo Metropolitan museum of Photography (TMMP). She teaches media arts as a project associate professor of the University of Tokyo, as well as a lecturer of media art at the Waseda University in Tokyo.

Jussi Angeslevä balances between education, research and industry, holding guest professorship at the Berlin University of the Arts and working as Art Director at ART+COM design agency. Ranging from novel interaction design research to physical installations and architectural media, his work exists in publications, prototypes and patents as well as high-profile installations in public space.

Sabine Himmelsbach is Artistic Director of the Edith Russ Site for Media Art in Oldenburg. Previously she worked in galleries in Munich and Vienna, as project manager for the Steirischer Herbst Festival in Graz, Austria and from 1999 to 2005, she was Exhibition Director at the ZKM | Center for Art and Media in Karlsruhe, Germany. She has lectured internationally on topics related with media art and contemporary culture.

Andy Cameron is an artist, designer, curator, writer and educator. He co-founded the Antirom studio in London in 1994. and the Hypermedia Research Centre at the University of Westminster. In 2001 he was appointed visiting artist, and subsequently, Creative Director, in interaction design at Fabrica, the Benetton research centre in Italy. Andy teaches interaction art and design at IUAV University in Venice.

Jens Hauser is a Parisbased art curator, writer, cultural journalist and video maker focusing on the interactions between art and technology, and on transgenre and contextual aesthetics. Hauser has organized L’Art Biotech (2003), a show on biotechnological art, and Still, Living (2007) at the Biennale of Electronic Arts Perth, and Sk-Interfaces (2008) at FACT. He’s also co-curating the Article Biennale in Stavanger (European Cultural Capital 2008 with Liverpool), and stages sk-interfaces at Casino, the Contemporary Arts Center Luxembourg, in 2009. He is currently a lecturer at the Institute of Media Studies at Ruhr University Bochum, Germany, and has been a guest lecturer internationally.

Sonia Cillari is an Italian media artist and architect. Her work involves the creation of sensorial and perceptual mechanisms in immersive and augmented environments. Her artistic investigation examines how patterns of consciousness, perception and identity emerge in such settings. Over the last years she has been specifically interested in a field of research concerning the “Body as Interface”. Her interactive installations, that are at the intersection of architecture and performance art, have been exhibited and presented internationally.

Casey Reas focuses on defining processes and translating them into images. He is an associate professor and chair of the department of Design | Media Arts at the University of California, Los Angeles. With Ben Fry, Reas initiated Processing.org in 2001, an open-source programming language and environment for creating images, animation, and interaction. In September 2007, they published Processing: A Programming Handbook for Visual Designers and Artists.

Sirikit Amann studied political science, theater and economics in Vienna, Munich and Boston. Since the 80s, she has been involved primarily with cultural education in the context of new media on the national and international level. Until 2007, she was a department manager for cultural mediation at KulturKontakt Austria. Currently, she heads the newly-founded Department of Artistic and Cultural Mediation at the Austrian Federal Ministry of Education, Art and Culture.

Angelika Plank has been in charge of graphic education at the Linz Art University since 1999. She has worked on diverse projects, including two Austrian and one European competition involving graphic education and new media. She is the president of the European Regional Council of the International Society for Education through Art (InSEA).

Christopher Lindinger studied computer science at the University of Linz and cultural management in Salzburg. He has worked as researcher in the field of scientific visualization and as a freelance developer for the entertainment industry. Since 1997 he has been affiliated with Ars Electronica and currently holds the position of the director of research and innovation in the Ars Electronica Futurelab. Beside this, he works as a lecturer at several universities in Austria, Germany and the UK.

Klaus Hollinetz is a member of the faculty of the secondary school in Stadl-Paura, Upper Austria. In addition to teaching, he is a painter and a facilitator of encounters with works of art. Since 1995, he has been supervising creative art projects involving young people. Since 2001, he has been a volunteer with an international youth organization. 2003–05 he designed stage sets for musical productions at the Alter Schlachthof and the Stadttheater in Wels.

Since 2002, he has been an editor, moderator and web-host at the Austrian state broadcaster ORF’s radio station FM4, where his work has focused on gaming and internet culture as well as electronic music. The list of magazines that have published his work includes Intro, De:bug and, most recently, TBA. His master’s thesis (2006) analyzes gaming journalism; additional scholarly publications on the subject of game studies are forthcoming.

David Sasaki is the director of Rising Voices, a global citizen media outreach initiative of Global Voices Online. Prior to his current focus on outreach he served as Global Voices‘ Latin America regional editor. He transitioned into online journalism after working as a freelance web developer and English instructor in Monterrey, Mexico. He now splits his time and residence between North and Latin America and writes frequently at Rising Voices, Global Voices, and on his personal weblog www.davidsasaki.name.

Régine Debatty writes about the intersection between art, design and technology on her blog www.we-make-money-not-art.com as well as on various design and art magazines. She also curates art shows and lectures internationally about the way artists, hackers and interaction designers (mis)use technology.

Alessandro Ludovico is a media critic and chief editor of the Neural magazine from 1993. He is the author of several essays on digital culture, and he co-edited Mag. Net Reader book series. He is one of the founding contributors of the Nettime community, one of the founders of the Mag.Net organization. He teaches at the Academy of Art in Carrara and is a research fellow at the Willem de Kooning Academy.

Huang Haitao is a PhD Candidate of Comparative Literature and Cultural Studies. He is now coordinator of the Sex/Gender Education Forum (SGEF) at Sun Yat-sen University, general editor of website for SGEF. He is a regular commentator on art, cultural, and social issues on Southern Metropolis Daily. In 2006, he and a group of students established the first officially approved GLBT students’ organization in mainland China. Huang was the visiting research fellow at the Department of Media and Film, University of Sussex, UK (2004).

Felix Stalder is a lecturer in Theory of the Media Society at the Zurich University of the Arts, where is serves as co-director of the Media Arts Program. He is also a senior researcher at the Institute for New Cultural Technologies (t0) in Vienna. His research interests focus on the intersection of culture, technology and politics, particularly in relation to new collaborative practices. Most recently, he co-organized the conference “Deep Search” (Vienna, Nov. 2008) Publications and other activities are documented at www.felix.openflows.com